A key requirement of a top-rated VPN service is to have unlimited bandwidth and fast speeds across its VPN server network.

We regularly test 56 VPN services for local and international connection speeds across our worldwide test servers.

Based on our December speed tests, the fastest high-quality VPN services are:

Comparison of the Fastest VPNs

To find the right VPN for you, use the table below to compare local speeds, international speeds, and price.

By encrypting your internet traffic, every VPN slows down your internet speed to some extent. The fastest VPNs minimize this speed loss, making it unnoticeable.

We thoroughly tested all VPNs we recommend, ensuring they meet our requirements for speed, security, and privacy.

Use the table below to compare how the fastest VPNs perform in each key testing category:

Unlike many review websites, we’re completely independent and focused on VPN software. We’ve spent thousands of hours testing and reviewing VPNs for speed using our VPN speed test process to recommend the best ones.

Here are some of our key VPN speed test statistics:

Analysis of the Fastest Top VPNs in December

All data findings on this page are from our manual speed tests. This involves physically using and speed testing VPN software.

This speed testing methodology produces findings that mirror your experience as closely as possible.

Here are our VPN speed test results when connecting to a local server with our 100Mbps internet connection: 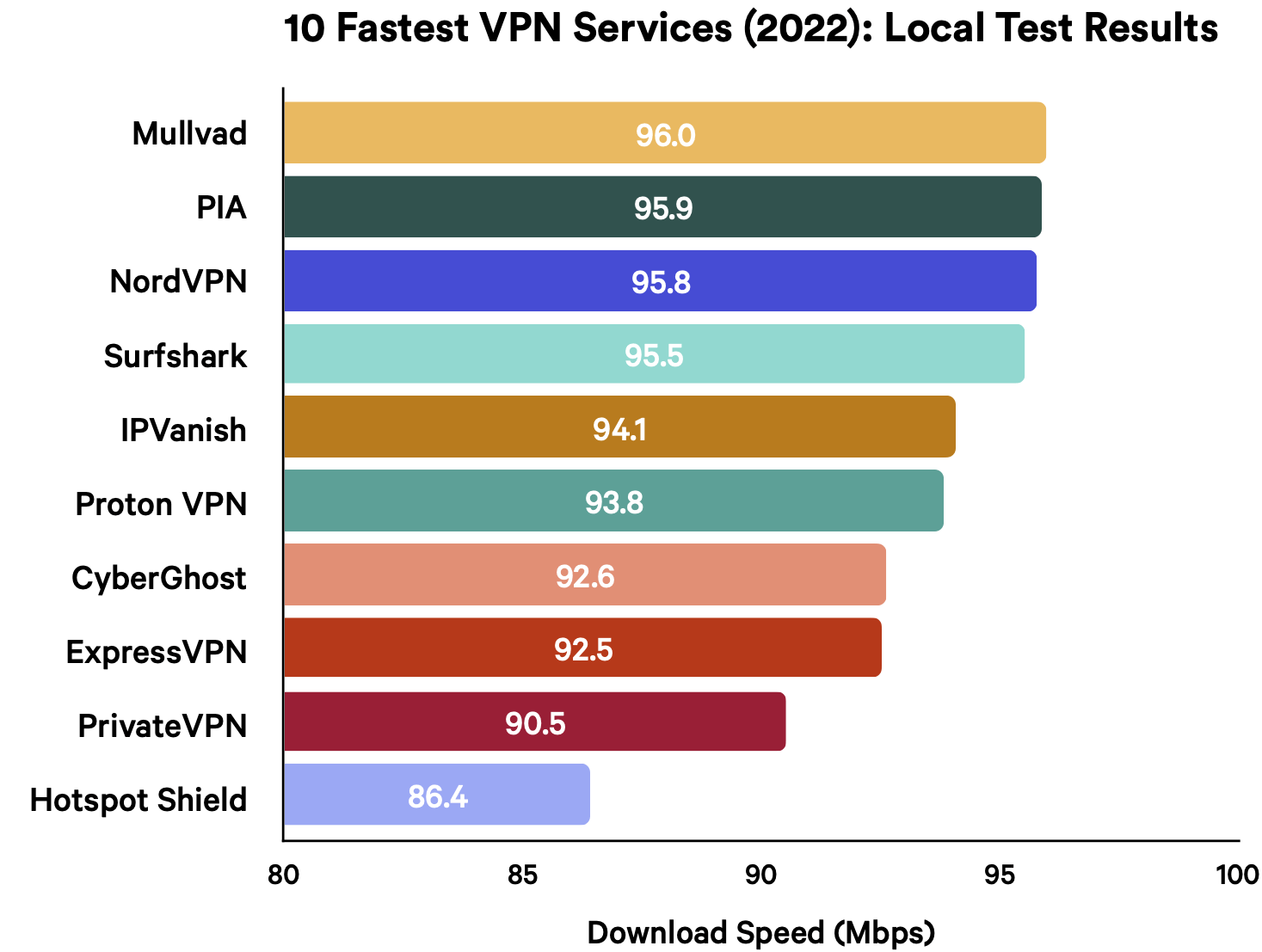 Only four VPNs recorded a download speed of above 95Mbps.

As the graph above shows, Mullvad is the fastest VPN on local connections. 90% of the VPNs we tested sustained speeds of over 90Mbps, though, which is an extremely impressive result.

Hotspot Shield performed the worst — registering slowdowns of up to 16%. This is still fast enough for most tasks, but you may struggle to perform high-bandwidth activities with this VPN.

Here are the results when connecting to international servers with our 100Mbps internet connection: 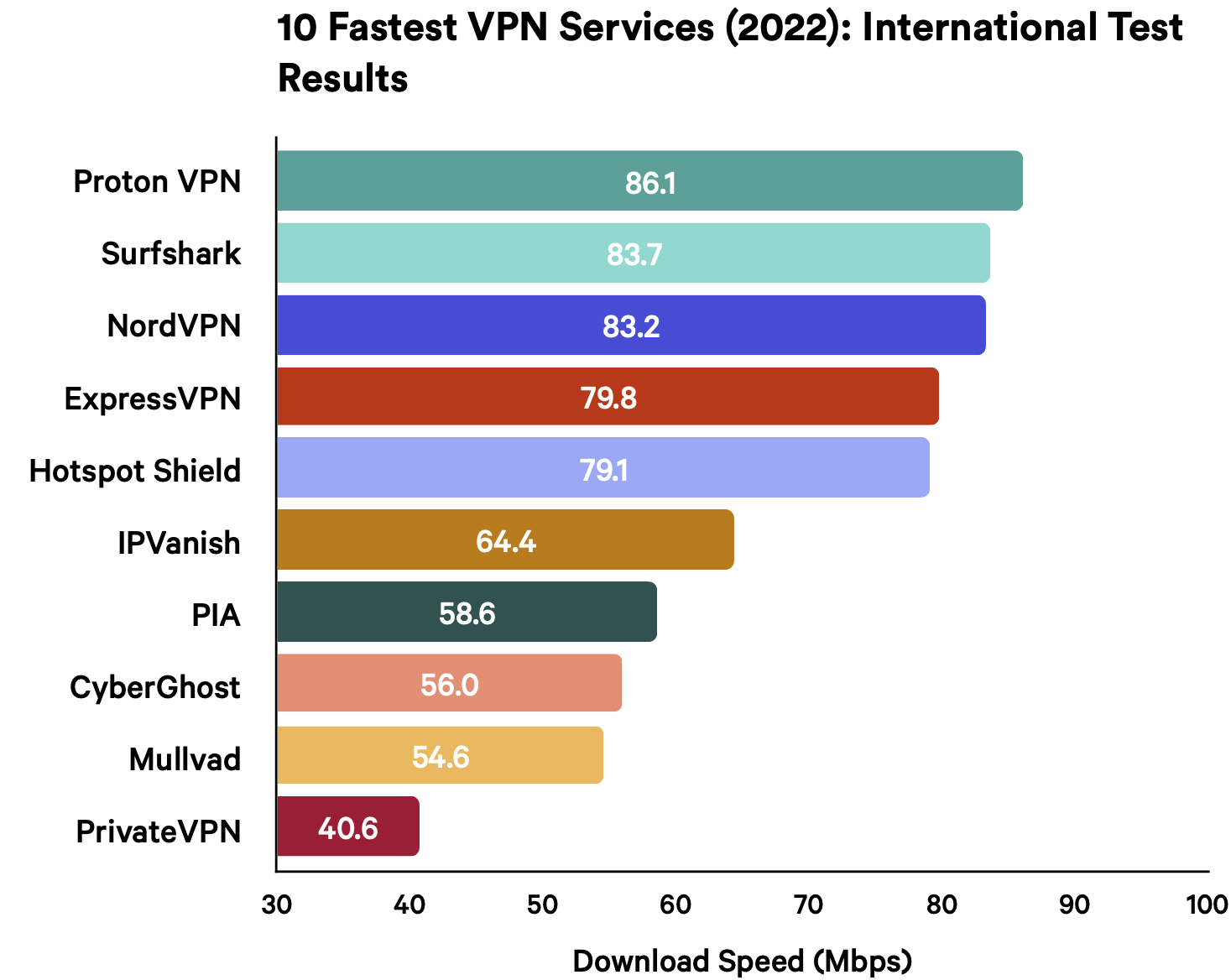 Only one VPN recorded an international download speed of above 85Mbps.

As the graph shows, Proton VPN is the fastest VPN service on international connections. From our six test server locations, we recorded an average download speed of 86Mbps.

How We Test VPN Speed

To ensure our VPN speed test findings are as accurate as possible, we follow a strict scientific process that’s been refined over many years.

Our methodology is designed to extract just raw data, to remove any risk of bias or human error in our results.

To find the fastest VPNs, we measure:

Here’s a more in-depth overview of the measurements we take when finding the fastest VPN, along with how much of our overall rating they make up:

As you’ll be connecting to a local VPN server most often, we prioritize short-distance speeds in our tests.

We’ve developed a test to measure the average local download speed of every VPN.

Here’s how we test for a VPN’s local speed performance:

VPNs can be used to watch geo-restricted Netflix libraries and play games on servers from the other side of the world. Because of this, it’s important that a VPN also has fast international speeds.

The extra distance traveled will have an impact on your download speeds. Generally speaking, the further a VPN server is from your physical location, the slower your speeds will be.

We’ve formulated a standardized and unbiased test to calculate the average international download speed of every VPN.

Here’s how we test for a VPN’s international speed performance:

It’s not enough for a VPN just to have fast peak performance. It needs to deliver fast speeds reliably, across every server location.

We’ve developed a method to calculate every VPN’s consistency. The more fluctuation present in a VPN’s speed test results, the lower we rate it in this category.

Here’s how we test for a VPN’s speed reliability:

Here are the steps we have in place to ensure our speed test results are the most reliable findings available:

We have a dedicated 100Mbps fiber-optic broadband line that is only used for conducting our VPN speed tests. This means that our speed is not slowed down by any external factors, like bandwidth-consuming activities from anyone else on the network. Any drops in speed are a direct result of the VPN running.

All of our speed tests are done using a Lenovo ThinkPad PC running Windows 10 and on an iMac running macOS Big Sur. These devices are connected to the broadband line using a Cat7 ethernet cable.
By keeping all of our equipment consistent, we can always conclude that any speed changes are as a result of the VPN, and not any issues with our test devices.

Only Use the VPN’s Preferred Protocol

For our speed tests, we use the VPN with the fastest protocol available. This allows us to give an accurate representation of the speeds you can expect while using the VPN.

For the tests on this page, the protocols used were as follows:

We use Ookla’s popular speed test tool for all of our tests. We elected to use this because a representative from Ookla assured us that it has “strong mitigations in place to prevent such behavior [VPNs prioritizing traffic to Ookla].”

None of the other speed test tools would provide this guarantee. In turn, this rules out the possibility of a VPN speeding up its service when it detects a speed test, which would give unreliable results.

Tested Over a Long-period

To minimize the risk of random and anomalous results, our final speed test result is the average from a series of tests, performed over a month. We tested all VPNs at regular six-hour intervals, equaling four different times per day. In total, we manually undertook thousands of VPN speed tests, ensuring our results most accurately represent the speeds of the fastest VPNs.

Although we have taken steps at every stage to keep our speed test results as accurate as possible, there are still some unavoidable limitations to our research.

These limitations may result in a VPN performing differently when you test it yourself. These include:

To quantify speeds and account for speed fluctuations, we would have to test every single VPN server during every second of the day.

To counter this, we pace our testing out throughout the day. Tests are performed four times a day, with a six-hour break between each test. Although not perfect, this allows us to test each VPN during both peak and quiet hours of the day, giving us an accurate, but not perfect, representation of typical speeds.

The fastest VPN is not necessarily the fastest VPN for all activities. For example, a VPN with fast download speeds but slow ping time will be great for streaming, but poor for online gaming.

For this page, we’ve chosen to focus solely on download speed. This is because the vast majority of online activities rely on a fast download speed, and fewer need a speedy upload speed or ping rate.

If download speed is less important for your use case, you can read our dedicated recommendations for the best VPNs for gaming and best torrenting VPNs.

Different devices, with different network cards and performance capabilities, can yield dramatically different speed test results. For example, desktop PCs will often have larger and faster wireless cards than mobile devices. This means that you may not always experience the same results as us, depending on your device.

To address this, we use two different test devices — one Lenovo ThinkPad and one Apple iMac. These devices are made by different manufacturers, which gives us speed test data from the two major desktop operating systems.

Overall, we have tried our best to eliminate all possible factors that could hold back our investigation into the fastest VPNs. However, with the VPN industry constantly changing, just keep in mind that we can only ever provide a snapshot and not an absolute answer for the fastest VPN.

How to Test VPN Speed at Home

To test your VPN speed at home, you’ll need to perform two separate tests — one while disconnected from the VPN, and one while connected to the VPN.

This first stage will give you your baseline internet speed. From this, you can calculate how much your VPN impacts your speed. 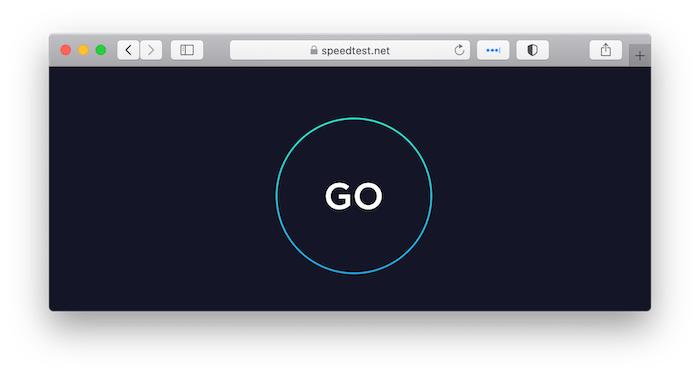 You can test internet speed by using Speedtest by Ookla.

To test VPN speed, just follow the steps below:

Testing Internet Speed Without a VPN:

Testing Internet Speed With a VPN:

EXPERT ADVICE: Your ISP will often exaggerate your baseline internet speed. Make sure to test your speeds while disconnected from the VPN before testing VPN speed.

To compare the speeds of popular VPNs on servers around the world, use our automated VPN speed testing tool.

How to Speed Up Your VPN 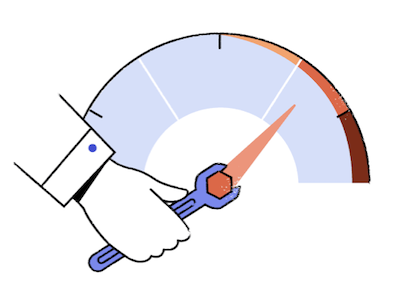 Although some loss in performance is inevitable when running a VPN, there are a few things you can do to make this unnoticeable.

Here are four ways to speed up your VPN:

1. Use one of the VPNs we recommend

All of the services on this page have been verified by our team of experts as the fastest VPNs on the market. If you instead choose a slow VPN service, there is nothing else you can do to boost speed performance.

2. Use WireGuard or the VPN’s proprietary protocol

Although secure, our tests have found that OpenVPN is noticeably slower than WireGuard and proprietary VPN protocols, like Catapult Hydra. If your VPN app allows you to choose, make sure to use WireGuard or the VPN’s custom protocol.

3. Connect to the server closest to you

In general, connecting to a closer VPN server to your location will give you faster speeds. This is because your traffic takes a shorter route, allowing the packets to be delivered at a much faster rate.

Due to channel interference, WiFi connections are less efficient than wired connections. Connecting your device directly to your router with an ethernet cable will give you faster and more reliable speeds.

EXPERT ADVICE: Your VPN’s speed is dependent on your regular internet connection. The best way to maximize speed is to make sure you’re getting the fastest connection from your ISP.