July 2022 Update: The latest Netflix VPN ban is affecting many VPN services. We regularly update this page with our test results, including VPNs and servers that still work with Netflix.

With a top-rated Netflix VPN, you can change your IP address location and stream different Netflix regions from anywhere in the world.

The table below compares the very best VPNs for Netflix. Use the key streaming data we’ve collected and choose the right Netflix VPN for you.

We test these Netflix VPNs daily, and rate each VPN based on its ability to unblock Netflix, streaming speed, server network locations, and ease of use.

In total, we’ve tested 71 VPN services with every Netflix region to find which VPNs stream the most Netflix regions. Access this Google Sheet to view our complete findings.

In the table below, see how the best VPNs for Netflix are rated in each testing category:

We test every popular VPN with Netflix each week. By doing this, we identify VPNs that no longer work with Netflix before other publications.

Here are some popular VPNs that no longer work as well with Netflix:

NordVPN is still a good Netflix VPN, but it’s been less reliable since August 2021. It now sometimes stops working with US Netflix, and it unblocks eight fewer regions than before.

It only just misses out on our top 5 rankings for Netflix, but there are still better alternatives at the moment.

CyberGhost is a good VPN, with dedicated streaming servers and a beginner-friendly interface. Until recently, it could stream six Netflix libraries.

But since the most recent Netflix VPN ban, CyberGhost only unblocks two regions: the US and Italy. Unlike before, the VPN can no longer access Netflix in the UK, Japan, France, and Germany.

In short, CyberGhost is no longer a good option for streaming multiple Netflix libraries. Thankfully, the VPN still works with other streaming sites, like BBC iPlayer, Hulu, and Prime Video.

Despite performing well in other areas, IPVanish is a poor VPN for streaming Netflix. In our latest streaming tests, we found the VPN can only stream US Netflix on PC.

When testing IPVanish on our Android and iOS device, as well as our Fire TV Stick, we could not access a single Netflix region.

In the past, it could sometimes unblock the Japan and US Netflix libraries, but it’s always been unreliable throughout the years.

Of all the top VPNs, IPVanish is the least compatible with Netflix. You should avoid it, even if you only plan on streaming occasionally.

VyprVPN is a good VPN for protecting your privacy online. It doesn’t log any user data and uses the WireGuard protocol for fast speeds.

VyprVPN claims it can “access Netflix US, UK, Canada, or Germany.” However, our tests found that this is untrue. VyprVPN does not work with any Netflix library.

Until August 2021, the VPN could unblock the US, UK, Canada, Japan, and German Netflix libraries.

Though it still works with Hulu and Disney+, we recommend avoiding VyprVPN.

Hotspot Shield used to work reliably with eight Netflix libraries, including the US. It’s also the fastest VPN on the market, which once made it a superb option for Netflix users.

Sadly, the VPN no longer works with US Netflix. We were only able to stream the India Netflix library in our most recent tests, but we believe it’s only a matter of time before Netflix blocks these servers.

Other VPNs that are blocked by Netflix

Below are some other VPNs that we found don’t work with US Netflix:

How to Watch Netflix with a VPN

Using a VPN helps you unlock the full potential of your Netflix subscription by increasing the amount of content you can watch.

Watch the video tutorial below to see how to use a VPN with Netflix:

To use a VPN with Netflix:

1. Choose a VPN that works with Netflix

Sign up to a VPN service that reliably bypasses region restrictions at high speed.

Download the VPN onto your preferred device and set it up by following the onscreen prompts.

You can download your chosen VPN directly from the VPN company’s website. If you’re using a smartphone, or an Amazon Fire TV Stick, search for the VPN’s name in the device’s app store.

3. Connect to a VPN server

Once you’ve installed the VPN on your device, launch the app and connect to your chosen server location.

For VPN services with dedicated Netflix servers, like CyberGhost, the process is even easier. Connect to the servers labeled ‘Netflix’ for smooth Netflix streaming.

Once you’re connected to a VPN server in your target country, launch Netflix in your browser or open the app on your mobile device.

If a VPN server is blocked by Netflix, disconnect and try another server in that location. The best VPNs have plenty of servers and IP addresses in every country.

EXPERT TIP:
Visit uNoGS to see which Netflix library contains the movie or TV show you want to watch.

Which VPN Works With the Most Netflix Libraries?

We tested 71 VPN services with Netflix in every country around the world, to identify which ones work with each Netflix region.

We also checked if the VPN worked with Netflix on all platforms, including on a web browser and streaming devices.

This is the most in-depth and exhaustive investigation into VPNs and Netflix. In total, we manually performed over 10,000 tests.

Our results show that Windscribe can stream the most Netflix libraries. The VPN works with 32 different regions, including the US, UK, Japan, and Canada.

We’ve collected a summary of our test results in the table below. You can compare 20 VPN services and their compatibility with the most popular Netflix libraries:

The graph below also summarizes the top 10 Netflix VPNs and the number of regions they access: 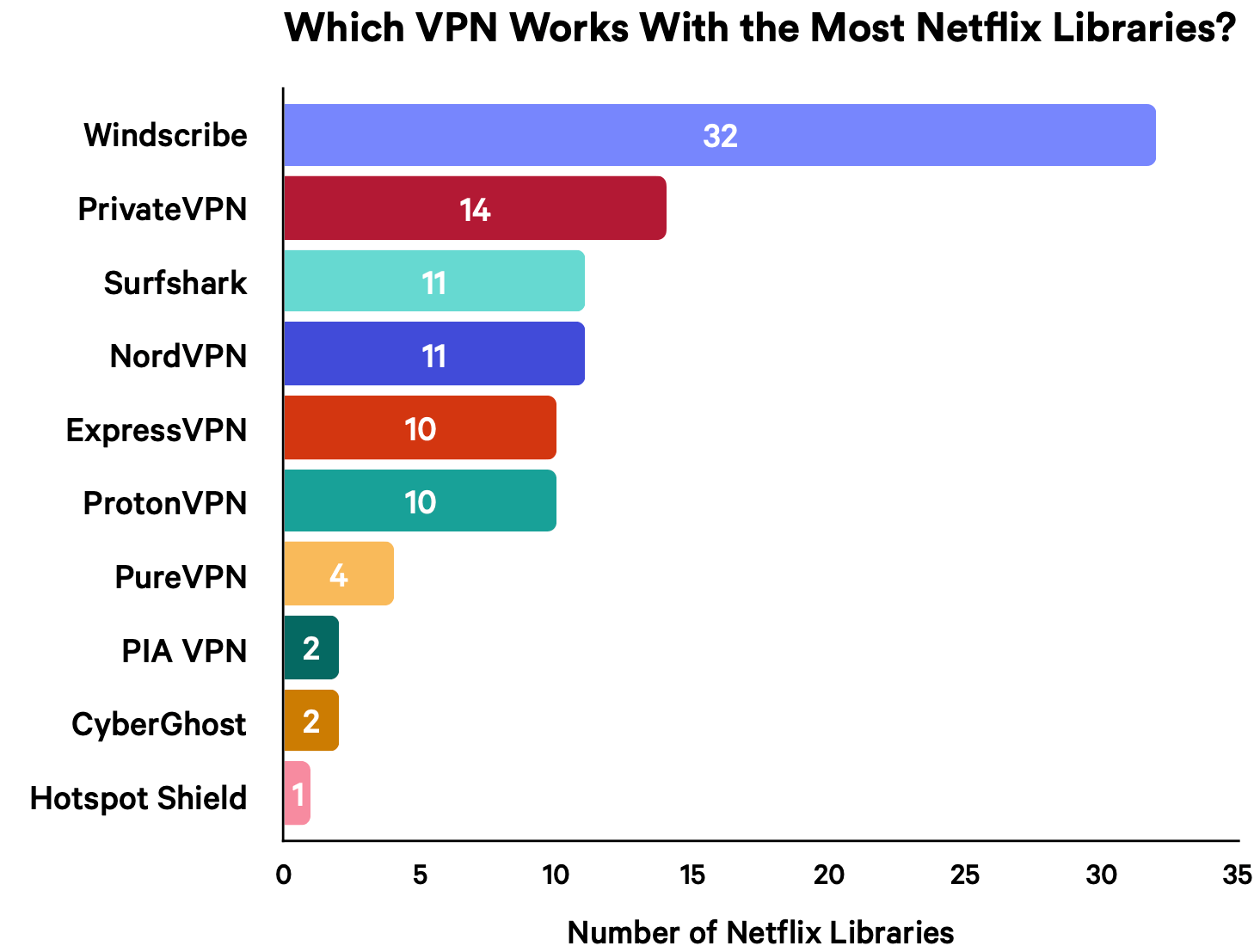 Only 1 VPN worked with more than 14 Netflix regions.

As you can see, Windscribe is the best option by far for international Netflix streaming. It’s followed by PrivateVPN, which unblocks 14 libraries, and Surfshark, which works with 11.

Based on the latest test results, Netflix Italy is the most accessible Netflix library. Over 60% of the VPNs tested were able to access it on all platforms.

That’s in contrast to Netflix libraries in South Africa, South Korea, and Switzerland – which only a couple of VPNs could access.

See the full results of the 71 VPN services we tested in our public Netflix VPN Tests Google Sheet.

For each VPN, you’ll see which Netflix region it unblocks, its success rate streaming US Netflix, and its platform/device compatibility.

How We Test the Best Netflix VPNs

We tested 71 VPN services for key attributes including speed, reliability, and support for popular streaming devices. As of writing, we’ve carried out over 10,000 tests.

To calculate a VPN’s overall rating for Netflix, we rate it based on six subcategories.

To rank the best VPNs for Netflix, we tested for:

In the sections below, we’ll go into greater detail about the categories of performance we test for in Netflix VPNs. We’ll also explain how much of our overall rating they make up:

The American Netflix library has the largest collection of movies and TV shows. It contains almost 6,000 titles, while some other regions have just over 2,000. For this reason, it’s essential that the best Netflix VPN works with US Netflix all the time and on every device.

We test 71 VPNs with US Netflix every week and track each VPN’s performance over time. If a VPN fails to unblock the American Netflix library for two consecutive weeks, we substitute it on this page for a more reliable VPN.

As well as working consistently, the best VPNs for Netflix will access the streaming service on any of its US servers. This means you can connect to whichever server is closest to you, resulting in faster speeds and higher resolution video.

Minimum Requirement: Works with at least 4 Netflix regions.
We Recommend: Works with over 30 Netflix libraries.

Many popular Netflix TV shows and movies are only available to stream outside of the main regions. Using a VPN that works with a larger total number of libraries increases the chance you’ll be able to access the content you want.

The best VPNs work with Netflix on almost all of its servers. The worse-performing services work with just the US.

To find out how many Netflix regions each VPN works with, we conducted the largest Netflix VPN study of any publication. In all, we tested 71 VPN services with Netflix in every country in the world.

To keep our information as accurate and up-to-date as possible, we update our findings weekly with data from our manual and automated testing process.

Streaming is a data-intensive activity, so you need high speeds from your VPN to avoid video buffering. As you’ll be using a VPN to access Netflix regions from around the world, the VPN’s long-distance performance is the most important speed factor.

To calculate an international speed rating for each VPN, we test each while connected to servers in Africa, Asia, Europe, North America, Oceania, and South America. After this, we then work out the average and assign the VPN a rating out of 10.

We prefer VPNs with an average international speed of over 80Mbps, as these can be relied upon to deliver 4K resolution across every server location. The worse VPNs have speeds of around 25Mbps, which often means inconsistent performance across different countries.

If a VPN isn’t compatible with streaming devices, you’ll have to install your VPN on a router to unblock Netflix on your TV. This is a complicated and involved process, so we only recommend Netflix VPNs that provide native apps for popular streaming devices.

We check the compatibility of each VPN with our Fire TV Stick, Google Chromecast, Apple TV 4K, and PS5. After setting up the VPN on these devices, we download the Netflix app and verify that we can now stream geo-restricted content.

As well as native apps, our top-rated VPNs also provide Smart DNS functionality. This means you can use a proxy server on any non-VPN-capable device.

A large server network means users are more evenly spread out rather than overcrowding servers in popular locations.

This impacts how often the VPN can stream Netflix. The fewer people who connect from a single VPN IP address, the less likely it is that Netflix will detect and block it.

Additionally, having more servers in a country makes it more likely you’ll find one that works.

The best Netflix VPNs will have several city-level server locations in top Netflix regions, like the US and Japan. We give extra credit to VPNs that provide dozens of IP addresses per server, too.

When using a VPN with Netflix, some servers may not work or you may encounter error codes. Because of this, it’s useful for a VPN to have good customer support to help resolve any issues.

A VPN’s customer service team will be able to tell you which servers are currently working with Netflix and be able to provide workarounds for any error codes.

We use a bespoke scoring system for rating each VPN’s customer support out of 10. A VPN service must include live chat support, along with email and online resources for us to rate it above 8.6 for customer support.