Hotspot Shield is a good VPN for torrenting. It supports P2P traffic on each of its 1,800 servers, has strong security features, and doesn't limit your data usage. Hotspot Shield won't leak your IP address, and delivers the fastest VPN speeds, too. That said, the service's invasive logging policy is problematic, meaning there are more private torrenting VPNs available. 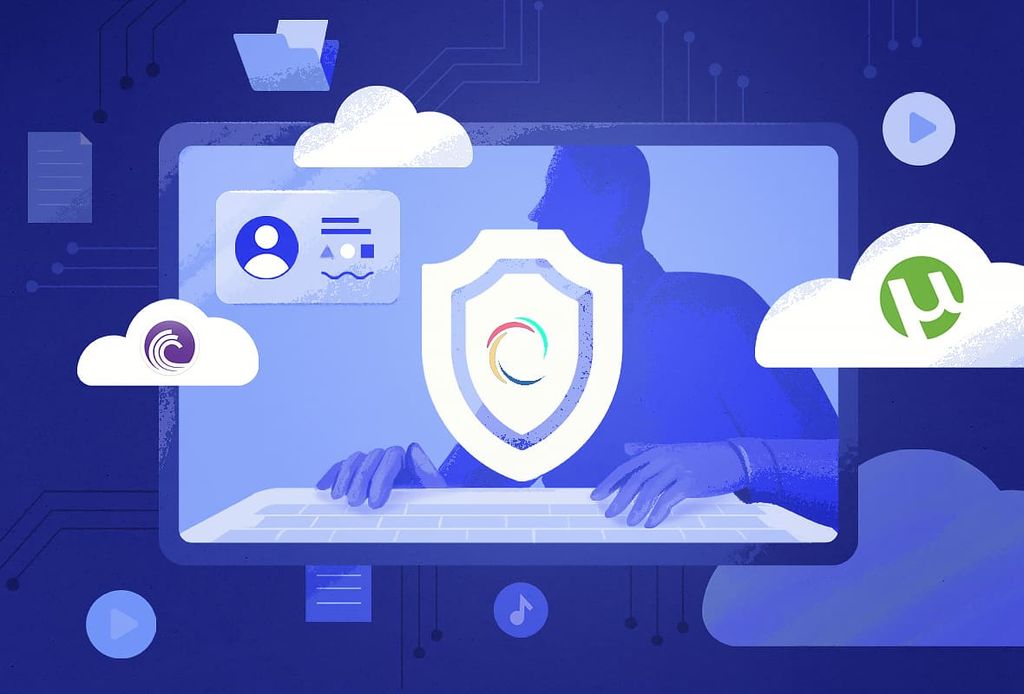 Your privacy and security is at risk every time you download torrent files without IP address protection. Other torrenters in the swarm can see and use your IP address to target you with malicious attacks.

Also, your ISP (Internet Service Provider) can monitor your P2P activity, and use it to throttle your internet speeds, or issue you with DMCA notices.

A good VPN protects you against these risks. It’ll hide your IP address and encrypt your torrenting traffic.

But, be aware that not every VPN permits torrenting, or is a good choice for P2P file-sharing.

In this guide, we discuss the findings from our extensive VPN tests to assess if Hotspot Shield is a good and safe VPN for torrenting.

Take a look at the video below to see us torrenting while using Hotspot Shield during our testing.

See the fastest, simplest, and most secure VPNs for torrenting here

Hotspot Shield is a popular VPN that allows torrenting on all its servers, if you sign up for a paid subscription.

Below is a quick overview of the key information you need for torrenting with Hotspot Shield:

In the next section, we’ll take a more in-depth look at how good Hotspot Shield is for torrenting.

Should You Use Hotspot Shield for Torrenting & P2P? 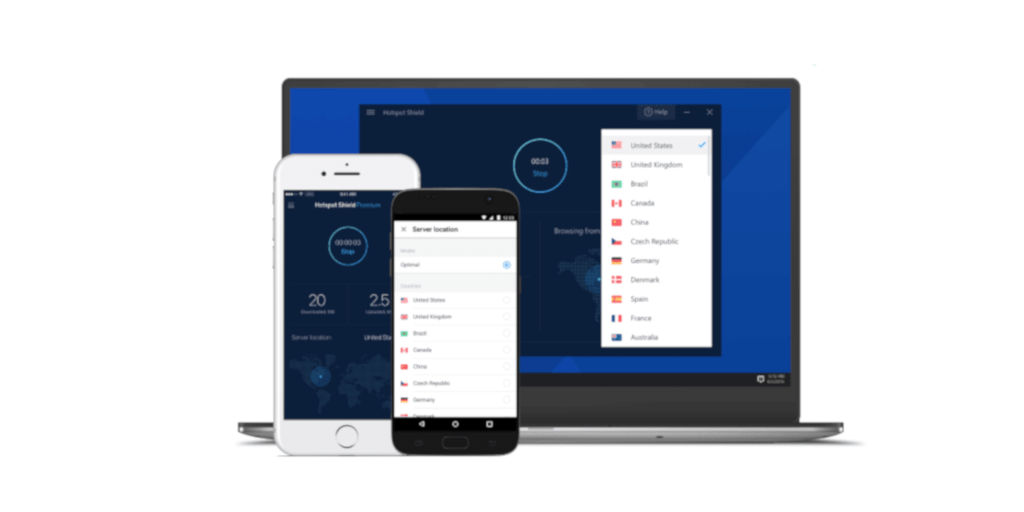 Hotspot Shield is a reasonably good choice for torrenting and P2P activity, especially when used with a safe client like qBittorrent.

The VPN uses unbreakable AES-256 encryption, lets you download .torrent files on any of its 1,800 servers. It also comes with an unlimited data allowance.

Here’s a table summary of the pros and cons of using Hotspot Shield for torrenting:

It is a promising sign that the company openly endorses P2P activity. The website features a number of resources dedicated to torrenting safely and anonymously.

Many VPN competitors often shy away from endorsing torrenting, so it’s reassuring to see a VPN provider showing an open commitment.

Despite this, Hotspot Shield is not the most privacy-friendly VPN. This is a worry when it comes to P2P file-sharing. The company’s logging policy is disappointingly invasive and there is a lack of transparency over the VPN’s proprietary connection protocol Catapult Hydra.

With governments, ISPs, copyright owners, and copyright trolls all looking to identify and expose torrenting activity, it’s vital that you trust your VPN to protect your privacy.

Although Hotspot Shield satisfies most of our criteria for a safe torrenting VPN, its logging policy just isn’t trustworthy enough for us to recommend it as one of the best VPNs for downloading torrents.

The rest of this chapter will evaluate the features that make Hotspot Shield both good and bad for P2P activity. Alternatively, you can check out some alternative VPNs that we believe are better for torrenting.

We regularly test over 71 VPNs and, currently, Hotspot Shield is the fastest VPN we’ve seen.

We experienced as little as 0.41% speed loss when manually testing Hotspot Shield, which is practically unheard of. Our automated VPN speed test tool also shows it to be consistently up there as one of the fastest VPNs on the market:

Hotspot Shield claims that these incredible upload and download speeds are due to its proprietary encryption protocol Catapult Hydra.

Not too much is known about Catapult Hydra, but it was supposedly designed to overcome some latency issues that other VPN protocols, such as OpenVPN and IKEv2, experience.

NOTE: These great speeds are not always directly reflected in P2P traffic. In our experience Hotspot Shield is fast, but not the fastest VPN for torrenting. 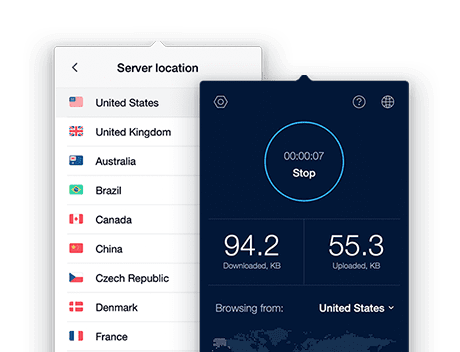 Hotspot Shield Elite lets you choose from over 1,800 VPN servers distributed across 80 countries. This isn’t the largest server network we’ve seen, but it’s a good size and is well spread out across the globe. Most importantly, P2P traffic is supported on all of them.

Popular countries such as the US, UK, Australia, and Canada are all covered, as well as other places that are less commonly accessible, such as Belarus and Algeria. City-level server choice is also available in 35+ cities.

The closer you are to the VPN server, the faster your connection speed tends to be. Hotspot Shield’s large server network means that no matter where you are in the world, you’re likely to have a server reasonably close by.

The size of the network is also beneficial because it reduces the threat of server congestion – where lots of users connect to the same server and cause it to run slower.

EXPERT TIP: Connect to the VPN server closest to your physical location to enjoy the fastest download and upload speeds.

No Data Cap or Bandwidth Limit

Unlike some VPN services, Hotspot Shield Elite imposes no data cap whatsoever. This means you can download large torrent files freely and without limit.

Our tests have also shown that Hotspot Shield does not throttle your speeds in any way.

Some VPNs will purposefully restrict your connection speeds if you engage in bandwidth-heavy activities. Given that avoiding ISP throttling is one of the main reasons to torrent with a VPN in the first place, it’s important that your chosen provider does not limit your bandwidth.

NOTE: Hotspot Shield Free does impose a 500MB data cap. So, even if it did permit P2P traffic, you wouldn’t be able to get very much done with such a small data allowance.

Hotspot Shield has a history of questionable logging practices. Nowadays, the VPN doesn’t log any activity data, which is good. But, according to its privacy policy, it still collects a lot of other information about its users, including:

This amount of logging is far too invasive for a torrenting VPN. Even if none of this information can be tied back to your P2P activity, other VPNs are able to operate their service without infringing on user privacy in this way. For this reason, we also do not recommend Avast SecureLine for torrenting.

Hotspot Shield claims that the IP addresses and other data it stores is deleted straight after the session, however we can’t know this for sure. It’s a risk you can’t afford to take when downloading torrents – especially when there are many VPN providers who are truly no-logs.

It’s also worth noting that Hotspot Shield is based in the US, which is a member of the Five Eyes surveillance agreement. This increases the likelihood that the information Hotspot Shield has logged will find its way into the authorities’ hands.

To prevent ISPs, copyright trolls, and other torrenters from spying on your file-sharing, you need a VPN that uses unbreakable encryption and won’t leak your data.

Hotspot Shield secures your data with the military-grade encryption cipher AES-256. It also comes with a VPN kill switch, which blocks any and all traffic in the event that the VPN connection is lost.

This is an essential security feature for P2P users, but unfortunately Hotspot Shield only offers it to Windows users. macOS or mobile torrenters are not protected by a kill switch.

The VPN also has a DNS Leak Protection feature and, when we tested Hotspot Shield, we were pleased to see no data leaks whatsoever.

Hotspot Shield’s most interesting feature, though, is Catapult Hydra. While most VPNs let you choose between a range of VPN protocols, Hotspot Shield forces you to use either its proprietary protocol, named Catapult Hydra, or IKEv2.

There isn’t too much information about Catapult Hydra, but we do know that it is closed-source and was designed to offer lightning fast speeds.

Although it is certainly fast and seems to be very secure, too, this lack of transparency around Hotspot Shield’s encryption is cause for concern.

With an open-source protocol, the code can be inspected for bugs and vulnerabilities. But when the technology is closed-source, like Catapult Hydra is, all we can do is trust Hotspot Shield’s word that the protocol is safe and secure.

If you’re a P2P user concerned about privacy and anonymity, this might not be enough. Learn more about the safety of Catapult Hydra here.

You might also want to look elsewhere if you’re someone who likes to ‘seed’ torrent files. That is because Hotspot Shield doesn’t allow port forwarding, which is essential for uploading large files. For a VPN that offers port forwarding, read our PrivateVPN review.

Costing as little as $2.99 a month, Hotspot Shield is a supremely fast VPN that has a large server network and is very P2P-friendly. Unfortunately, while it is probably safe for torrenting, the company’s intrusive logging policy and closed-source encryption mean we recommend using a different VPN for torrenting.

Hotspot Shield is certainly not a bad VPN for torrenting, but there are safer options. Here are some alternative VPNs that we recommend as better than Hotspot Shield:

P2P traffic is permitted on all of ExpressVPN’s 3,000 server network and the service comes with a host of invaluable security features, including DNS leak protection and a VPN kill switch available on most devices.

Although it is a more expensive option, ExpressVPN is simply the best VPN on the market and is our #1 recommendation for torrenting. You can even try it for free with a 30-day money-back guarantee.

The only drawback is that the VPN doesn’t allow port forwarding. Find out more by reading our dedicated guide to ExpressVPN and torrenting.

PrivateVPN is a budget-friendly VPN that is excellent for torrenting. It offers P2P-optimized servers in 17 different countries, has a strict zero-logging policy, and delivers very fast download and upload speeds.

Unlike ExpressVPN, PrivateVPN also allows port forwarding – making it the best VPN for users who want to ‘seed’ torrent files as well as download them.

We love that PrivateVPN uses its own first-party DNS servers rather than relying on an unknown third-party to deal with DNS requests. All of its apps come with a VPN kill switch, and the service uses ultra-secure AES-256 and OpenVPN encryption.

Though its server network is much smaller than competitors, PrivateVPN is still a quick and super safe VPN. Costing just $2.00 a month, it’s a great choice for torrenting on a budget.

NordVPN is one of the most popular VPNs for torrenting. It delivers industry-leading speeds, with as little as 2% speed loss on local connections, so you won’t have to wait long for your torrent files to download.

It’s also one of the safest and most privacy-friendly services we’ve reviewed. NordVPN’s strict no-logs policy has been independently verified, its Panama jurisdiction is a privacy haven, and the VPN uses the most secure encryption technologies.

Unlike Hotspot Shield, you can’t torrent on every single server in the network. However, there are enough P2P-optimized servers covering a wide range of countries that this shouldn’t be an issue.

Overall, NordVPN gives you everything you need in a torrenting VPN. It’s super affordable and also works great with streaming services like Netflix, Disney+, and BBC iPlayer.

For a more in-depth look, check out our complete NordVPN review.