Using a VPN, you can watch LINE TV from anywhere in the world, including Thailand, Indonesia, the Philippines, and the US. Simply connect to a Taiwanese VPN server and watch dramas, variety shows, anime, and movies. The best way to pay for a LINE TV VIP membership outside of Taiwan is to add your credit card to LINE Pay. 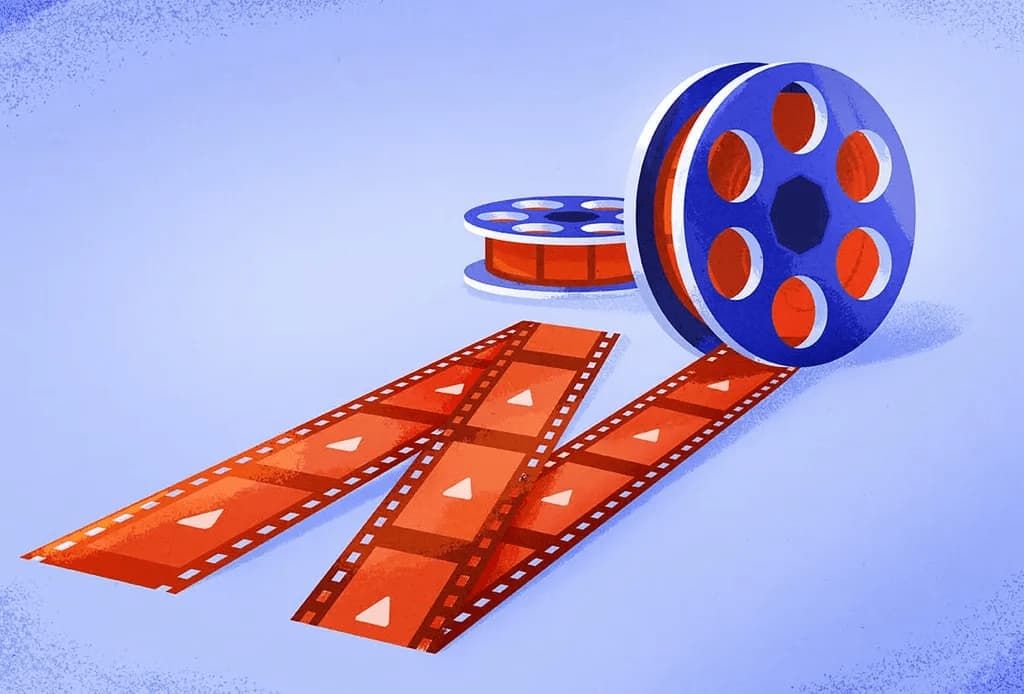 LINE TV is a Taiwan-exclusive streaming platform that offers original series, movies, and shows. It is owned by LINE, an extremely popular Japanese messaging app, which in turn is owned by Z Holdings, a Tokyo-based holding company.

Unlike other popular streaming services such as Netflix or HBO Max, LINE TV features predominantly Asian content. It’s very popular in South Asia in 2019, it had over 40 million users in Thailand, Taiwan, and other regions.

However, in 2021 Line TV closed its service to people in Thailand. Since then, it has considerably reduced its service in lots of other countries.

We tested whether we could watch content on LINE TV while connected to VPN servers in Thailand, Indonesia, the Philippines, Mexico, and the US.

We found that the best way to watch LINE TV from outside of Taiwan is to use a VPN and connect to a server in Taiwan.

SUMMARY: How to Access LINE TV from Anywhere in the World

In this guide, we’ll explain where LINE TV is available and how to watch LINE TV outside of Taiwan. We’ll reveal the best VPNs for streaming LINE TV, and what to do if LINE TV is not working.

EXPERT TIP: If you’re anywhere outside of Taiwan, the best and easiest way to stream LINE TV is to use ExpressVPN for free for 30 days and connect to a Taiwanese server.

Where Is LINE TV Still Available?

LINE TV is only consistently available if you’re based in Taiwan. It’s also sometimes available to users in Japan, albeit inconsistently, as it was only successful around 33% of the time.

It used to be available in 19 global markets, including Australia, Canada, Hong Kong, India, the Philippines, Russia, and Singapore. But it is no longer available in these countries without a VPN.

LINE TV is not available in Thailand, either. The streaming platform closed its service in Thailand on 31 December 2021. There are currently no plans for LINE TV to be relaunched in these regions where it has been closed down.

If you try to access LINE TV from outside of Taiwan, you’ll be able to browse the streaming service’s content library, but you won’t be able to play any of the video content. Instead, you will see a message stating that the content is blocked in your region. 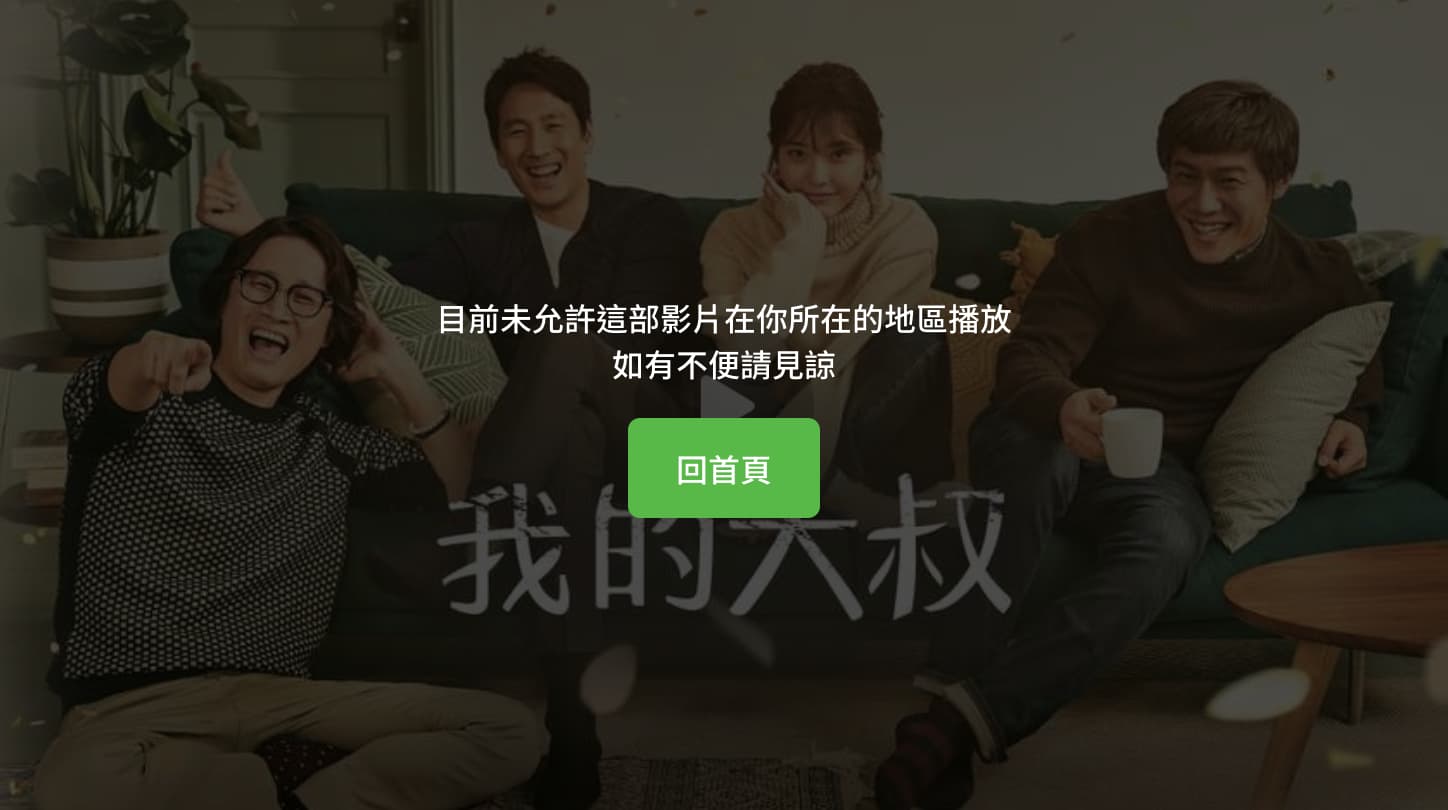 In the UK, LINE TV’s content is geo-blocked: “This video is not currently allowed to play in your region. Sorry for any inconvenience.”

However, there is a quick and easy solution. If you’re outside of Taiwan, you can use a VPN to change your IP address and unblock LINE TV’s content. We successfully unblocked LINE TV 100% of the time by using a Taiwanese server on a trusted VPN, such as ExpressVPN or TunnelBear Free.

In order to find the best VPN for streaming LINE TV, we tested over 70 VPNs. Here’s a table showing the results from our LINE TV streaming tests with ten of our top VPNs for LINE TV:

As you can see in the table above, PIA and Windscribe VPN also managed to unblock LINE TV in Japan. However, this only worked 33% of the time. And so, even though these two VPNs have an extra country where LINE sometimes works, Taiwanese servers are just so reliable for unblocking LINE TV that we recommend simply opting for the best VPNs overall for LINE TV.

How Much Does LINE TV Cost?

LINE TV has a similar subscription model as YouTube, Twitch, or Crunchyroll. LINE TV is free with ads, but users can upgrade to VIP membership to remove ads and watch restricted content like films and new episodes of TV shows. 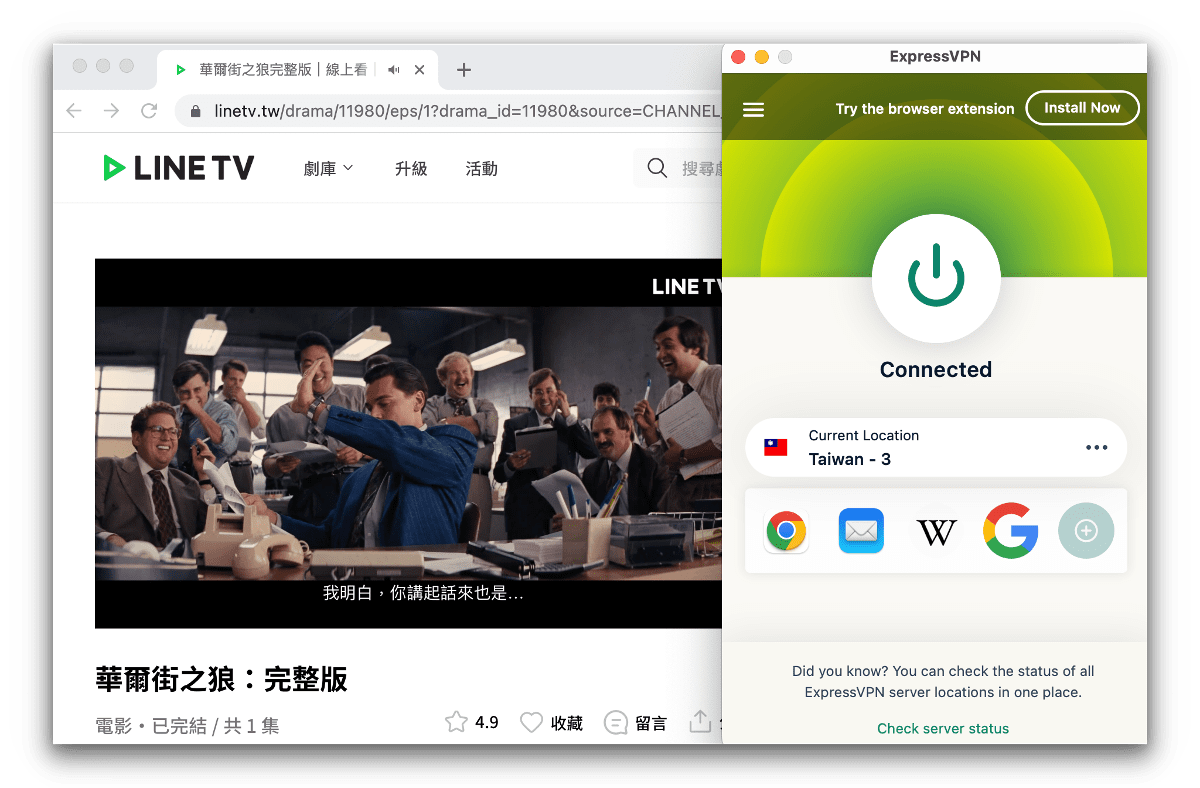 With ExpressVPN and a LINE TV VIP membership, we were able to stream The Wolf of Wall Street LINE TV.

To sign up for a LINE TV VIP membership outside of Taiwan, you’ll have to use a VPN and LINE Pay.

How to Watch LINE TV Anywhere (Outside Taiwan)

Here’s how to watch LINE TV outside of Taiwan:

Unlike other tutorials you might find online, we do not recommend downloading an .APK to watch LINE.

How to Sign Up for LINE TV VIP Membership Outside Taiwan

You’ll receive an error message if you try to pay for a VIP membership with a card and phone number from outside Taiwan.

We found a solution so you can pay for a VIP membership from anywhere in the world. It’s quite a long process, though. You have to:

Step 1: Set up LINE Pay on your mobile device

Step 2: Open a LINE TV account on your computer or tablet

Watch the video below to find out how to open a LINE TV Account:

Follow these steps in the image above to pay for a LINE TV VIP membership. 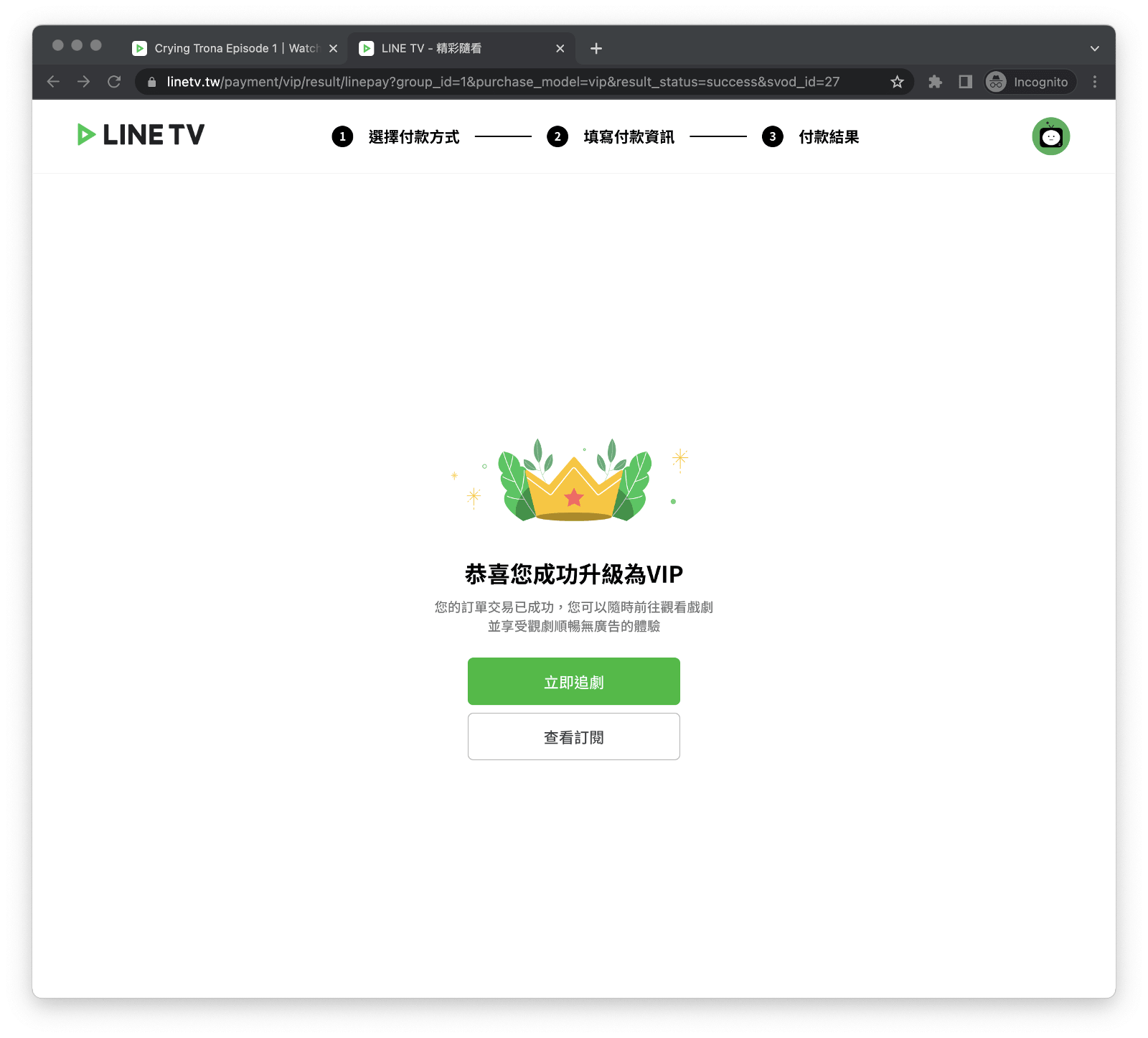 This screenshot from our tests shows what happens when you successfully pay for a VIP membership with LINE Pay.

Once you’ve successfully paid for a VIP membership, you’ll receive a message which says:

Congratulations on your successful upgrade to VIP. Your order transaction has been successful, you can go to watch the drama at any time and enjoy a smooth and ad-free experience.

The Best VPNs for LINE TV

Lots of VPNs offer a Taiwanese server. But only the best VPNs for LINE TV offer a reliable server in Taiwan, multiple servers in Asia, fast download speeds, and a strong zero-logs privacy policy.

We’ve assessed the top VPNs services to find the absolute best free and paid VPNs for watching LINE TV outside of Taiwan. Lots of these VPNs are also great for bypassing geo-blocks on Netflix and other streaming platforms such as Hulu.

Below is a table, which shows each VPN’s subscores:

ExpressVPN is the best VPN for watching LINE TV outside of Taiwan. It consistently unblocks all of LINE TV’s content on its Taiwanese server.

It’s extremely fast, with speeds averaging around 87.46Mbps. It also has reliable long-distance speeds, and its app is beginner-friendly. 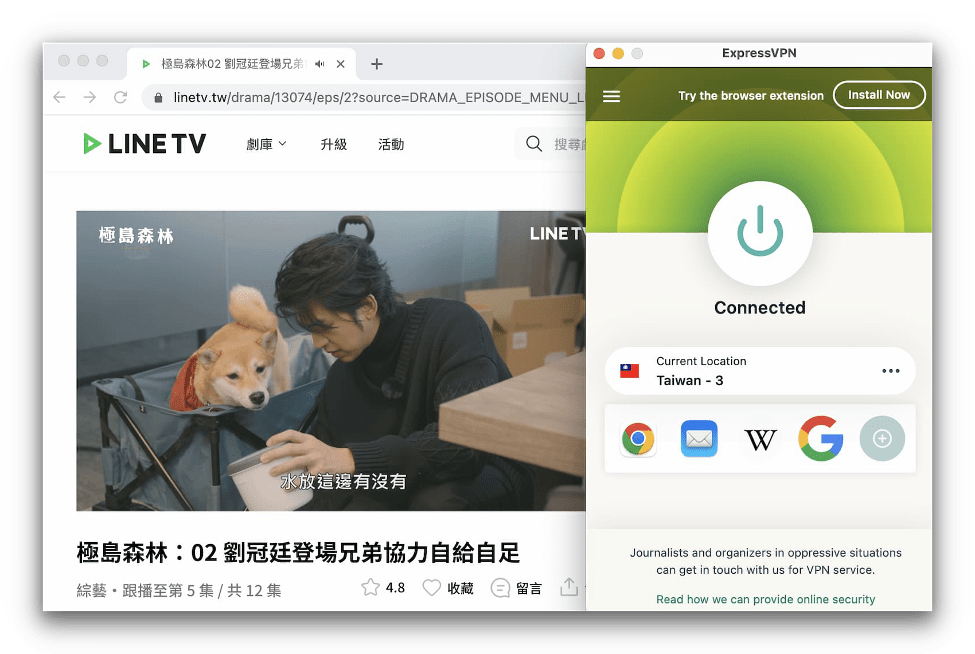 We tested ExpressVPN with LINE TV and found that it was perfect for bypassing content geo-blocks.

In addition, ExpressVPN has a Smart DNS feature, called Media Streamer. It works with Apple TV, Roku, and PlayStation 5, as well as other devices that don’t have native VPN apps.

There’s only four drawbacks. Firstly, ExpressVPN’s Taiwanese server is virtual, which means the physical server is not actually located in Taiwan, but in Hong Kong. Your internet traffic is routed through a server in Hong Kong, where it is then assigned a Taiwanese IP address.

Secondly, it’s much more expensive than its competitors when comparing their best prices. There is a seven-day ExpressVPN free trial on mobile devices, though.

Secondly, ExpressVPN doesn’t offer split tunneling on macOS or iOS. This means you wouldn’t be able to channel your VPN traffic through specific apps on apple devices. This isn’t an issue if you’re using a Windows or Android device.

Lastly, in our kill switch research we discovered that ExpressVPN can sometimes leak your IP address if you switch servers, without first disconnecting from the VPN.

On the other hand, as long as you’re in a country without online censorship, or you remember to disconnect from a server before connecting, you’ll be fine.

CyberGhost is the second best VPN for LINE TV. Similar to ExpressVPN, it has 24 servers across Asia.

Not only does it unblock LINE TV, CyberGhost is also one of the best VPNs for streaming content on Netflix, HBO Max, and Amazon Prime Video. 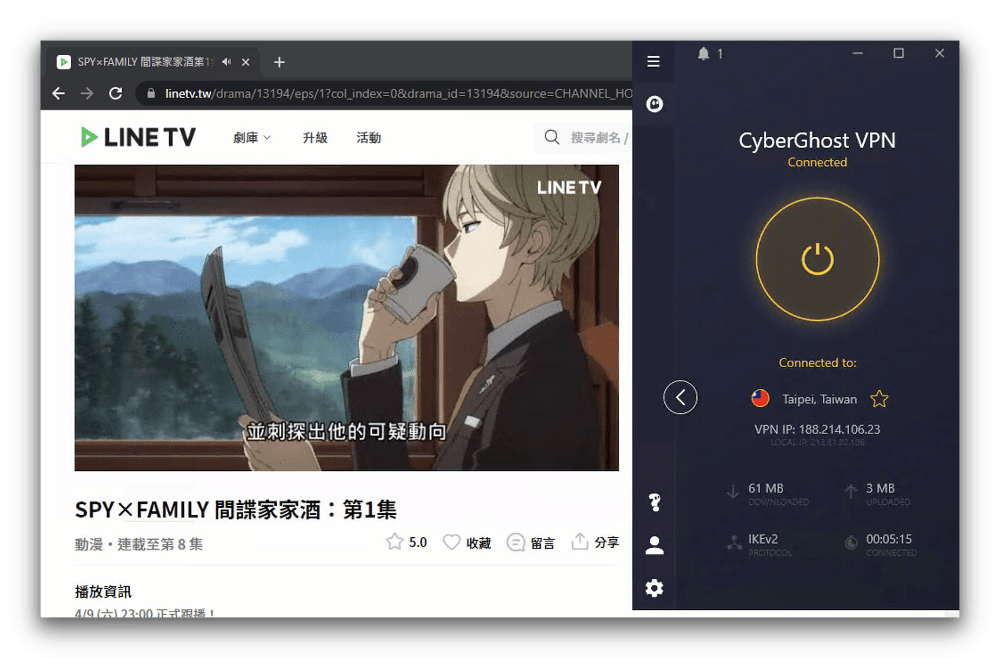 With CyberGhost, you can easily unblock all the content on LINE TV.

CyberGhost consistently unblocks LINE TV from anywhere in the world, when connected to its Taiwanese server.

It’s also got the fast and trusted protocol, WireGuard, across all native apps, including Android, iOS, Windows, and macOS.

There are a few downsides, though. CyberGhost’s most recent macOS app has a severe bug that can prevent you from opening or quitting the app.

Additionally, its macOS and iOS apps don’t have OpenVPN. Lastly, CyberGhost is based in Romania and is subject to invasive EU data laws. However, this isn’t too much of a worry because it doesn’t keep any logs.

Surfshark is a reliable and affordable VPN that consistently unblocks LINE TV. It’s great value for money – only $2.49 for a two-year subscription.

Unlike some other cheap VPNs, Surfshark has a very high level of security. Not only does it offer AES-256 cipher encryption, it’s also headquartered in the British Virgin Islands, a privacy haven, and it’s got a zero-logs policy. 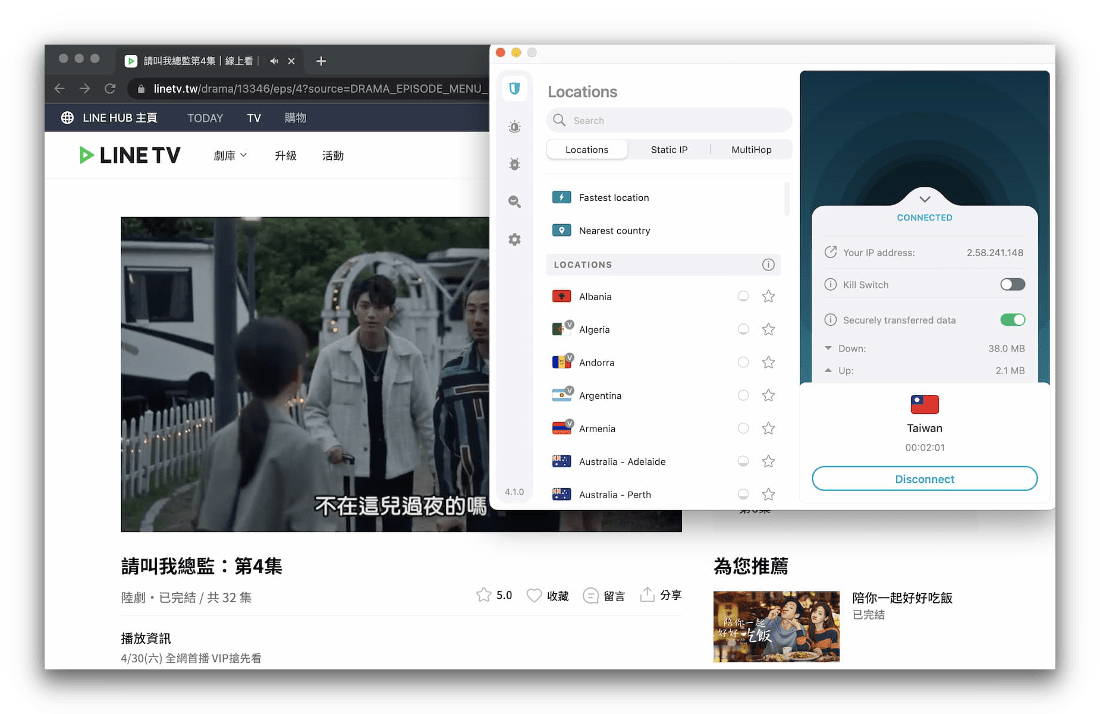 Surfshark’s main drawback is that it hasn’t been externally-audited. This would confirm that its logging policy is being adhered to and that its software is watertight in the face of malicious hackers.

There’s also sometimes a slight delay when connecting to a server that’s far away. This delay time can also increase if your WiFi is below 50Mbps.

TunnelBear Free VPN: The Only Free VPN with a Server in Taiwan

In our tests, TunnelBear Free was easily able to unblock LINE TV.

Since it’s free, you do get access to fewer servers compared to its paid counterparts — with only seven in Asia. However, it still works perfectly fine for bypassing LINE TV’s streaming blocks.

As for other streaming services: it unblocks US Netflix and HBO Max, but it fails to unblock Disney+, Hulu, and BBC iPlayer.

As with other free VPNs, there are some major downsides. The main one is that you only get 500MB of free data a month, which is approximately one hour of standard definition video streaming. But on the plus side, if you don’t use it your data will roll onto the next month so you won’t lose it.

It’s also based in Canada, but its partner group is located in the US, which means it adheres to intrusive data privacy laws. To counteract this, TunnelBear’s privacy policy is very close to being no-logs.

LINE TV Not Working? Here’s How to Fix It

With the right VPN, it’s easy to stream content on LINE TV outside of Taiwan. However, you still might encounter some problems.

Here’s five quick fixes for the most common issues:

Why We Don’t Recommend Downloading an .APK to Watch LINE TV on an Android Device

You may see other LINE TV guides and YouTube videos suggest downloading an .APK onto your Android to watch LINE TV. This is an unsafe solution that doesn’t often work.

In order to do this it will include several files, like a .ZIP file. This means you have to be careful of .APKs, as you could be downloading malware hidden inside these files.

We tested three different .APKs from APK Pure, Up to Down, and Softonic. We found that one couldn’t be opened once installed, whereas the others wouldn’t connect.

Some .APKs for LINE TV claim to have a VPN inbuilt. However, this can be used to store all your browsing data, which can then be sold on for a profit.

What Is Available on LINE TV?

LINE TV has a large library of content from all over the world, including China, Japan, South Korea, Thailand, and the US. 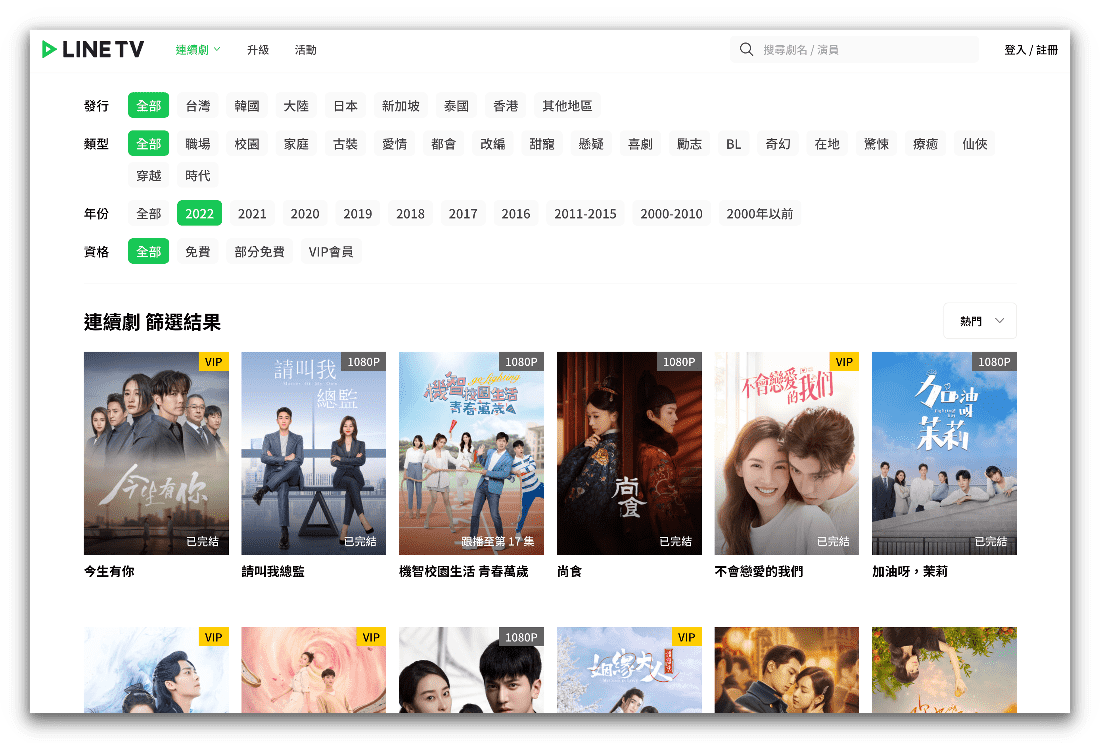 Using LINE TV’s advanced search we looked for shows and movies released in 2022.

Here’s a table showing a selection of movies and shows that are available to watch on LINE TV from anywhere in the world using a VPN: