Not quite a VPN, Mozilla’s new security extension is part of the company's push towards greater privacy and security 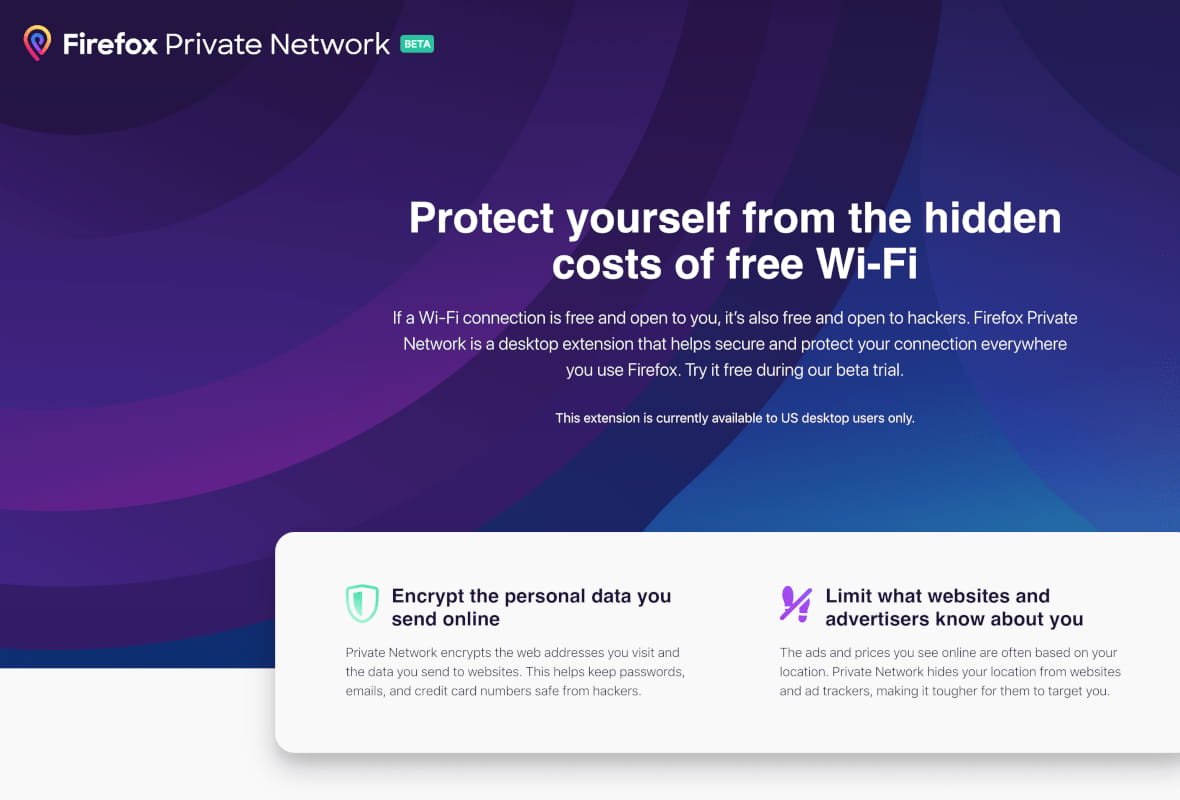 A desktop extension for Firefox has been released and made available to US users.

Available in beta form since yesterday, ‘Firefox Private Network’ describes itself as: “A desktop extension that helps secure and protect your connection everywhere you use Firefox.”

It is designed to protect user’s private and sensitive information, particularly against the danger of using public WiFi hotspots. Mozilla Product VP Marissa Wood wrote in a blog post: “Using the Firefox Private Network helps protect you from hackers lurking in plain sight on public connections.”

Firefox Private Network works by routing and encrypting your connection through a secure server. This works similarly to a VPN, concealing a user’s IP address.

However, Firefox Private Network is more like a straight proxy and is not a fully-fledged VPN service. Many VPN services provider browser extensions as part of their subscription, but these are less robust than VPNs. If you want to find out more about the difference between proxy and VPN, it’s worth consulting our guide.

One major difference between this extension and a VPN is that you cannot change your regional IP when using Firefox Private Network. In Cloudflare’s privacy policy, it says: “Avoidance of geographical restrictions on content access is explicitly not a goal.” It’s telling that Mozilla have not called the extension a VPN.

We reported on the prospect of a security extension in June, however it was being touted more as a full-on VPN, with Mozilla CEO Chris Beard discussing the necessity for online security when arguing that you “really should use VPN.”

The design of Firefox’s extension, however, looks to be inspired by common VPN apps and browser extensions, with a simple toggle button and a drop-down screen in which the user can gain one-click protection.

Firefox is aiming to present itself as a leader in internet security and privacy in a time of well-publicized internet scandals and controversies. Mozilla has partnered with ProtonVPN in the past and launched a number of privacy features, including a Facebook Container add-on that blocks Facebook from your web browsing activity and Firefox 69, which blocks third-party tracking cookies and cryptomining by default.

Wood goes on to say: “One of the key learnings from recent events is that there is growing demand for privacy features.”

Firefox Private Network is completely free to use for US users, although there is a strong prospect that Mozilla may charge for it in the future.

As we originally reported, the plan was to have it as a premium feature (touted at $12.99 per month)—a way to encourage monetization—and, considering the website describes it as ‘currently free’, it may be worth trying it while you can.