Freedome VPN from F-Secure collects detailed data logs. It comes with a small server network and it's not good for streaming. While it does record fast speeds and has strong VPN encryption, it's falling far behind top VPNs.

Freedome VPN makes big promises for quality, claiming “30 years of experience,” a “simple, elegant interface,” and “fast servers.” But can it live up to its claims?

We tested F-Secure Freedome VPN thoroughly to find out how effective this VPN service is, and to answer these questions below:

We’ll go into more details to answer all of the above shortly but first, take a look a F-Secure Freedome’s pros and cons:

Who is Freedome VPN?

Freedome VPN is part of the F-Secure Corporation. Its VPN service was initially released in 2013.

What’s worse: Freedome VPN’s privacy policy states that it will share user data if necessary to comply with “lawful warrants and court orders of the jurisdictions applicable to [it],” and it has enough data to identify an individual user.

The VPN service collects detailed VPN connection logs, which include:

Your IP address can be used to identify you, which makes this VPN service a terrible choice for those with stringent privacy needs.

Even worse, all of this information is stored for up to a year before being permanently deleted, depending on the purpose of the logs. This is a very long time to store such personally identifiable information.

F-Secure Freedome states that this information is necessary for troubleshooting purposes, as well as to monitor the service for misuse, but many other VPNs manage to maintain a quality service without such intrusive data logging. We’re not fooled.

And it gets even worse.

While Freedome VPN doesn’t store DNS requests for VPN-only users, if you use the Tracker Mapper service – which is automatically enabled when you first use the VPN – it logs all the URLs you visit while connected!

These logs are permanently deleted after three days. But the privacy risks that come with Tracker Mapper far outweigh the advantages provided by the feature.

You should disable Tracker Mapper before you start using Freedome VPN and also opt out of sending ‘non-personalized usage data’ upon installing the software.

Fairly quick on nearby servers

Freedome VPN isn’t as fast as our top rated VPNs, but it’s still quite quick on nearby servers.

On same-country connections you can expect Freedome to bring your internet connection down by around 20% (the fastest VPNs record drops of less than 10%).

That should be more than fast enough for HD streaming with very little buffering. We got speeds of 74Mbps down using the Freedome’s UK VPN server (we test from the UK) starting on a 100Mb connection.

When connected to Freedome VPN:

Our download speed loss when Freedome VPN is running: 19%

Over long-distance VPN connections Freedome VPN cuts down your download speeds by about 60% (the UK connecting to the US), a far cry from the speeds of our fastest VPN services.

Here are our speed test results connecting from the UK to various Freedome VPN servers:

Freedome’s upload speeds are pretty good (a 33% drop on same-country connections), but its intrusive logging policy should be more than enough to put off torrenters.

If you’re interested in knowing more about how we test VPN speeds please read our How We Review VPNs page.

Freedome VPN has a very small server network with only 22 countries to choose from across the world.

The vast majority of Freedom VPN’s servers are located in Europe and North America. Popular locations like the UK, the US, Canada, and Australia are covered. 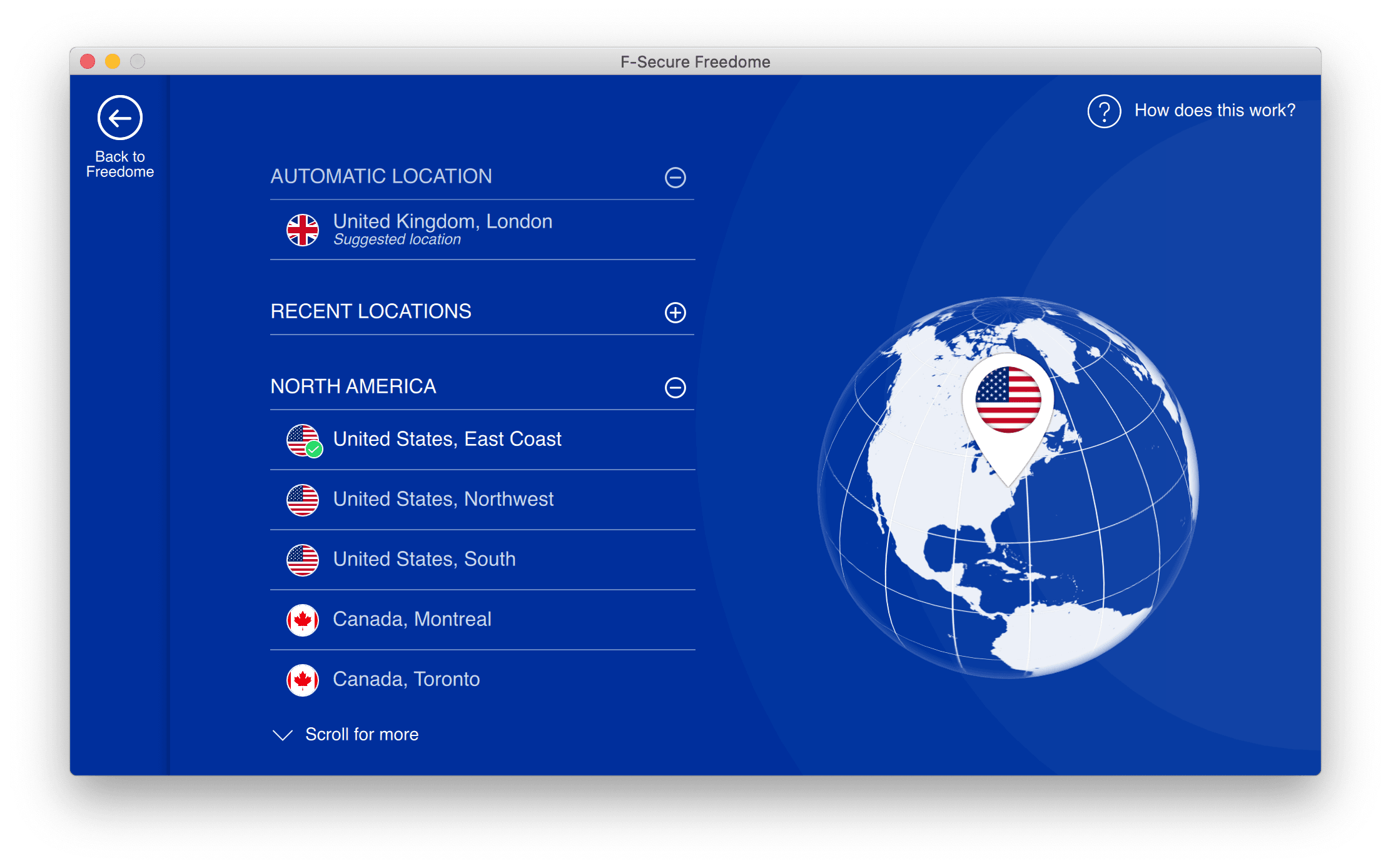 Freedome VPN provides only two VPN server options for all of  Asia: Japan and Singapore. It used to cover Hong Kong but has since removed its servers from there.

There are no VPN servers at all in Central and South America, or Africa.

If you live far away from one of the countries provided, you’re better off choosing another VPN service that provides more options, such as NordVPN.

We didn’t expect to be able to drill down to city level in any country considering F-Secure Freedome’s server network is tiny, but you can in Canada, which has three city options (Montreal, Toronto, and Vancouver).

Freedome VPN also provides regional options in the US, which is split into five regional servers with labels like East Coast, West Coast, South, and so on.

Connecting to the closest region will help you to experience the fastest speeds.

Freedome VPN doesn’t disclose the number of individual VPN servers in its network, the customer support team confirmed that the network consists of bare-metal physical and virtual VPN servers.

Some of the servers are owned by Freedome VPN and some are leased, which is common practice among VPN services.

Unreliable for streaming & torrenting is restricted

We don’t recommend Freedome VPN for streaming due to its very small server network.

During our most recent tests, we could watch BBC iPlayer while connected to Freedome VPN’s UK VPN server. But it failed to unblock US Netflix on its servers.

The lack of dedicated streaming servers means that Freedome VPN could get blocked when popular streaming services crack down on VPNs – which happens quite often.

If you’re mainly going to be watching Netflix while connected to the VPN then check out our top VPN picks for streaming here.

Freedome VPN isn’t a good (or safe) VPN choice for torrenters as is prohibits P2P activity on over half of its VPN servers, including those in the US, UK, and most of Europe.

Here’s a list of all servers that you’re not allowed to torrent on:

If you attempt to torrent in any of these locations, Freedome VPN will temporarily block the user’s network connection for a few hours. This is a particularly strict VPN when it comes to cracking down on P2P file-sharing.

If that’s not enough to put you off Freedome VPN for torrenting, it’s intrusive logging policy will.

Use one of these VPN services for torrenting instead.

Not a reliable VPN for China

Freedome VPN isn’t reliable for China, or other high-censorship countries like Iran, Russia, or Saudi Arabia.

Not only does Freedome VPN have a tiny VPN server network but it also lacks additional obfuscation tools or stealth protocols which mask VPN traffic to beat the censors. In other words, blocked content will remain blocked.

Freedome VPN is useless as an anti-censorship tool.

To learn more, read our dedicated guide to using Freedome VPN in China. Alternatively, you can see the top VPN recommendations for China here.

Unfortunately, there’s no way of manually configuring the Freedome VPN software to work with any other devices, such as Linux.

You can use Freedome VPN on up to three or seven devices at the same time, depending on the price plan you have chosen.

You can’t even install Freedome VPN at router level, so there’s no way of protecting any devices outside of the four main platforms shown above or using it on games consoles like Xbox or Playstation.

Does the basics well but lacks configurable options

Freedome VPN will be secure enough for most everyday users, but it doesn’t have many configurable options.

The Windows, MacOS, and Android custom VPN apps run exclusively on our preferred VPN protocol OpenVPN, which gives the best balance between performance and privacy.

The iOS app operates on IKEv1 or IKEv2 (selectable by the user), the latter of which is second-best to OpenVPN, but still safe. There is no option to choose WireGuard protocol on any of Freedome VPN’s apps. 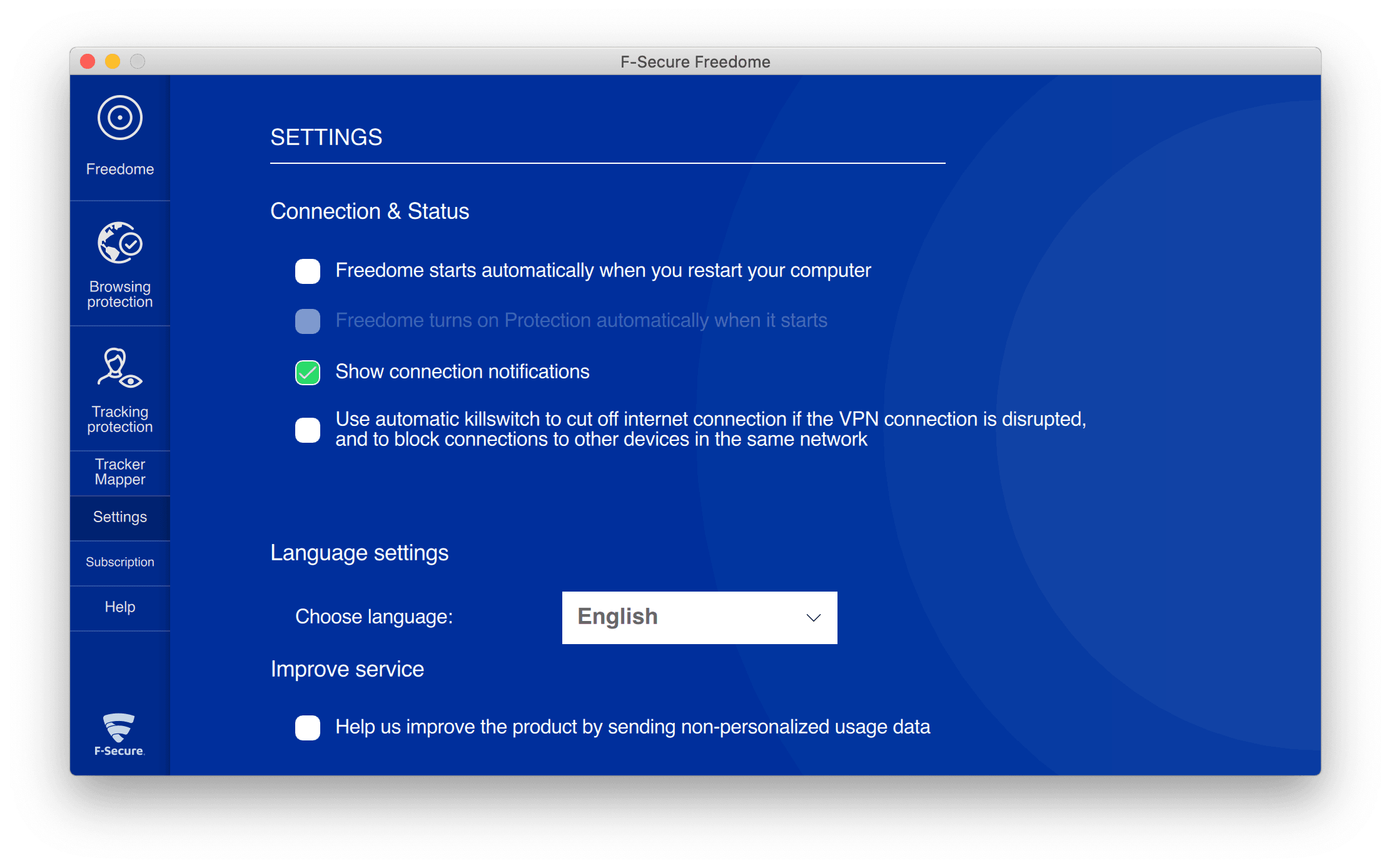 Encryption is via AES-256, a top cipher that’s considered to be ‘unhackable’.

Freedome VPM comes with the essential VPN kill switch feature, which cuts off all web traffic in case of a VPN connection drops to prevent your true IP address from being leaked. 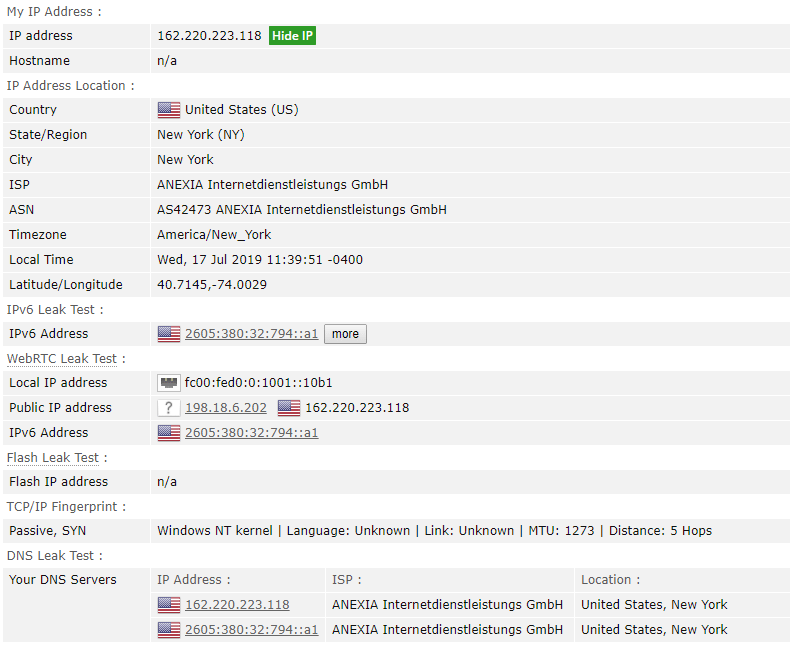 Freedome VPN leak test results on browserleaks.com. We test from the UK.

Freedome VPN doesn’t have any other configurable options, though, so there’s no split tunneling, port control, or VPN servers optimized for Tor. Overall, Freedome VPN has a good level of security that will protect your data but there’s barely any additional features to explore or take advantage of. As it stands, this is a basic VPN.

How to Install & Set Up Freedome VPN

Freedome VPN is really easy to download and install on your device, requiring no manual configuration or prior VPN knowledge.

Once set up, Freedome’s custom VPN apps are great for inexperienced VPN users or those looking to ‘click and forget’.

The home screen is incredibly simple, and there’s a ‘How Does This Work?’ prompt in the top-right corner that explains how virtual locations work and where you should connect for the best possible performance, which is a nice little touch for VPN newbies.

More tech-savvy users will be disappointed with the lack of manual configuration on offer, though.

Freedome’s customer support is good, if a little difficult to navigate. Because the company has so many different products, and even different VPN packages, you have to do a bit of digging to avoid getting lost in irrelevant content.

As well as some useful online resources and a community forum, there’s also a live chat feature that’s available during normal working hours (the service hours are listed on the website) with friendly, helpful agents that were willing to answer all of our questions in detail.

It’s refreshing to see that F-Secure also includes contact telephone numbers for those that would rather speak to a human being – this isn’t very common with VPN providers, but we think it’s a really valuable feature that will be appreciated by a lot of people.

Freedome VPN from F-Secure has VPN subscriptions that vary in cost based on the number of devices you can use the VPN on simultaneously.

The cheapest option is Freedome VPN’s offer of three devices for one year, which costs $34.99 up-front, which comes to $2.91 per month.

Freedome VPN comes with a five-day free trial – you don’t have to provide any personal details or payment information, so there’s no risk of auto-renewal. The free trial allows you to test out the full-featured software with no data or speed restrictions.

Freedome VPN also has a 30-day money-back guarantee, which is completely no-questions-asked. This means you don’t need a specific reason to request a refund – just contact the support team for your money back even if you just change your mind.

Do We Recommend Freedome VPN?

While Freedome VPN is easy to use, making it attractive for those with little technical knowledge, we don’t recommend it due to its intrusive logging policy.

Freedome VPN logs your true IP address for 90 days, in addition to a bunch of other connection logs, and it doesn’t even work reliably with popular streaming services like Netflix. There are far better, cheaper, and safer VPNs available at the same (or even lower) price point.

CyberGhost is a cheap VPN that's simple to use for beginners. It works with Netflix, BBC iPlayer, torrenting, and more. Best of all, it's trustworthy and safe to use. Read CyberGhost review

ExpressVPN is a little more expensive than Freedome VPN, but it provides a far, far better VPN service. Not only can you connect to over triple the number of countries (94) but you can also install it on streaming devices and Linux, which isn't possible for Freedome. It works with streaming, torrenting, and in China, too. Read ExpressVPN review