VPNSecure is a mediocre VPN service with simple apps and average connection speeds. Though its encryption is strong, the company’s Australian jurisdiction is a threat to your privacy and its small server network fails to unblock popular streaming services. If you’re looking for a reliable paid VPN, we recommend looking elsewhere.

Looking for a secure VPN that works with Netflix? We recommend ExpressVPN.

We put VPNSecure through our rigorous ten-step testing process to answer the following questions:

We’ve given a quick summary of VPNSecure’s pros and cons below, followed by our full VPNSecure review.

Before we tell you all about VPNSecure’s speeds and Netflix access (or lack thereof), you should know about the company’s background – and, more importantly, where it’s based.

It was founded in Australia in 2010 by Shayne McCulloch, who is now the Managing Director.

Australia is one of the worst jurisdictions for a VPN service to be based in.

For a start, it’s a member of the Five-Eyes international intelligence-sharing alliance.

In addition to Australia’s mandatory data retention legislation, the country recently passed controversial laws that force technology companies to give police and security agencies a backdoor to encrypted messages.

This poses a huge privacy issue for VPN companies incorporated in the country.

In February 2019, VPNSecure notified users that it was planning on moving the company over to Hong Kong in light of Australia’s new laws.

The email said that the VPN service would soon operate under Lucro Corp Limited. 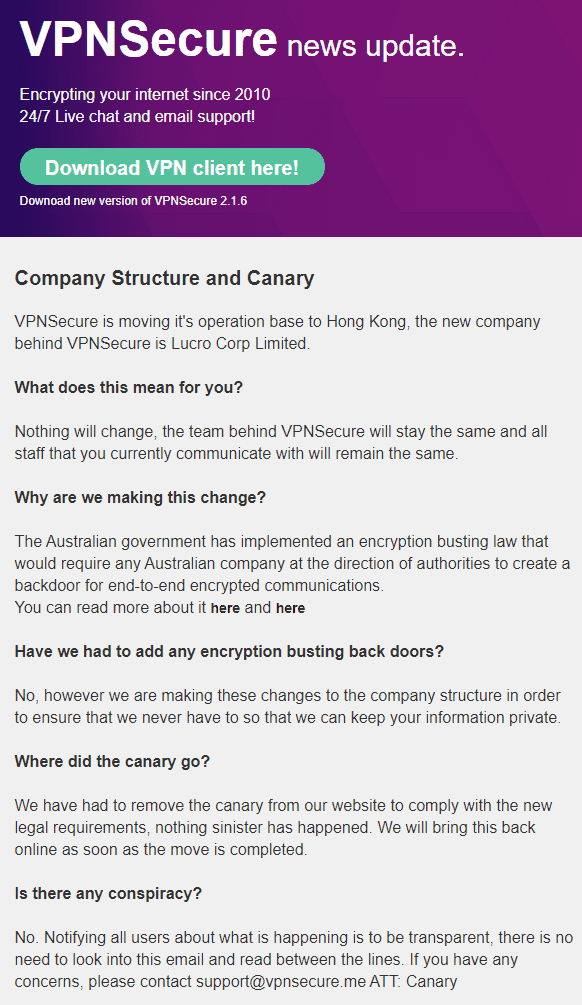 However, almost a year on the transition still hasn’t been completed.

We got in touch with a member of the VPNSecure team who told us that the move has been put on hold due to the recent protests in Hong Kong.

While VPNSecure still has plans to move jurisdictions the team will only proceed once they feel that it is safe to do so. 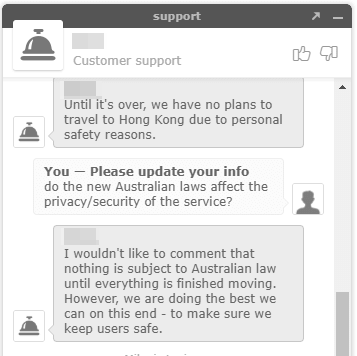 Until then, VPNSecure is bound by intrusive Australian laws that could put your online privacy at risk.

But there’s a catch.

VPNSecure is a no-logs VPN until the government decides to intervene:

“VPNSecure Trust will not monitor you or your use of the service, including its contents unless VPNSecure Trust has reason to believe that such action is necessary to: (1) conform to legal requirements or comply with legal process.”

Knowing what we do about Australia’s intrusive privacy laws, that’s very concerning.

We asked VPNSecure what this might entail and the company’s managing director told us:

“If we we [sic] required by a court order then we would only capture the specific data that was outlined within the court order and no other details.”

According to the director, so far the company has not been required to do this, but VPNSecure can’t rule it out for the future.

What’s worse, VPNSecure has been forced to withdraw its warrant canary that it used to publish in order to inform users that it had not received any gag orders or warrants. This is due to an Australian law that came into effect in 2015 prohibiting the use of canaries.

Until VPNSecure moves its operations to a privacy-friendly jurisdiction we can’t guarantee that it’s a truly private VPN service.

Average speeds - fast enough for most

VPNSecure is neither the fastest nor the slowest VPN we’ve tested – it’s fairly average.

You can expect a 20% drop in download speeds when connected to a nearby server and a much greater slowdown on servers further afield.

The fastest VPNs only affect speeds by 5% or less.

If all you need a VPN for is protecting your browsing and some light streaming it’ll hold up nicely.

When connected to VPNSecure:

Upload speeds were much more impressive, dropping by just 6% on same-country connections.

Here’s how VPNSecure performed connecting to other countries:

VPNSecure doesn’t stand out for its speeds, but it’ll do the job for most users.

VPNSecure’s server network is much like its performance – nothing to shout about, but passable.

There are around 80 physical (not virtual) VPN servers located across 50 countries, most of which VPNSecure leases off of third parties.

Considering the top VPN services on the market provide hundreds of servers around the globe, VPNSecure’s network isn’t ideal for optimizing performance as it could be affected by congestion.

VPNSecure’s servers are dotted fairly evenly around the world, though, with the majority in Europe and North America.

There are several in Asia-Pacific too, but coverage is threadbare in Africa and South America with just three servers between them in Brazil, Chile, and South Africa.

On the plus side, you can drill down to city level in loads of countries:

Unfortunately, these aren’t clearly labeled within the apps, which only provide the country name and server number (e.g. Italy, Italy 2, Italy 3), but you can use VPNSecure’s website for cross-referencing.

No good for streaming Netflix or torrenting

VPNSecure is the first to admit that it doesn’t work with Netflix.

In fact, the VPNSecure team doesn’t recommend the VPN for unlocking any popular streaming services – whether that be BBC iPlayer, Hulu, or Disney+.

If streaming is your main reason for buying a VPN you should definitely take your hard-earned cash elsewhere.

The vast majority of popular streaming services are cracking down on VPN providers, blocking their users from accessing content.

The only way to watch your favorite shows is to buy a VPN that actively works to beat streaming blocks. VPNSecure isn’t one of them.

Unlike streaming, VPNSecure does work with torrenting clients – except for on the US10 and UK3 servers.

But we still don’t recommend it for protecting P2P traffic.

Because of its incorporation in Australia, which we’ve already seen is a privacy minefield.

While VPNSecure tries to maintain a no-logs service, the Australian authorities can demand user data as and when they please.

It’s best to stick to VPNs that can ensure your torrenting activities remain private and safe – these are the best VPNs for P2P and torrenting.

VPNSecure’s desktop apps come with Stealth VPN, which is an obfuscation tool that scrambles OpenVPN traffic so that it is less easily detected by firewalls such as China’s.

However, it’s still not a surefire way to access all the blocked websites in the country.

The reviews online about its success in China were mixed, with the most recent reviews saying it didn’t work: 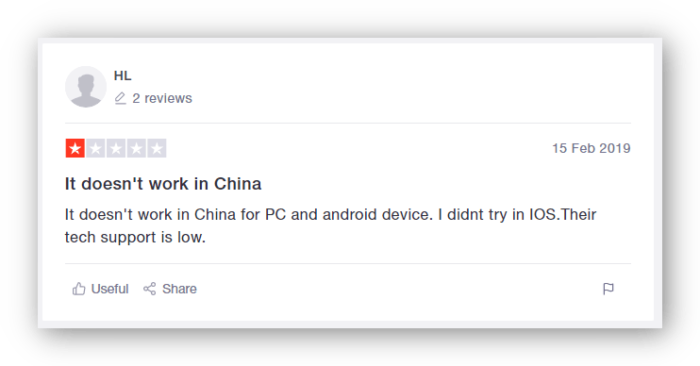 It’s becoming increasingly difficult to connect to VPN servers from within China, but there are a handful of services that work more reliably than others, which you can read about here.

VPNSecure’s obfuscation tools will be useful in other high-censorship countries like Turkey and Russia, though. Just be aware that the tools aren’t available for mobile apps yet.

VPNSecure has developed custom VPN apps for the most popular desktop and mobile devices including:

You can use the VPN software on up to five devices at the same time, as long as you’re connected to different servers on each device.

VPNSecure doesn’t provide any custom VPNs apps for streaming devices and games consoles, but that doesn’t mean you can’t protect them.

By installing the VPN software on a supported router all the internet-connected devices in your home can benefit from VPN encryption.

It’s a pretty fiddly setup process and not all home routers support VPN technology, but VPNSecure does sell pre-configured routers if that’s what you need.

They don’t come cheap though, ranging from $89.95 up to $299.95 excluding the cost of the VPN subscription itself.

VPNSecure also comes with a proxy browser extension for Chrome, but we don’t recommend installing it.

While it will spoof your IP address to get past geo-blocks, the proxy doesn’t encrypt internet traffic, so your personal information won’t be protected.

VPNSecure comes with all the VPN basics: strong encryption, solid protocols, and a VPN kill switch.

There’s not much more to it, but those features alone provide enough security.

Firstly, the VPNSecure apps run on OpenVPN – the safest protocol you can use.

The apps come with three different ciphers to choose from: DES-CBC, AES-128, and AES-256. We strongly recommend AES-256 as it’s the industry standard and considered to be uncrackable.

VPNSecure’s kill switch feature (‘Disable Internet on disconnect’) is available for the Windows and MacOS apps only, and it prevents your IP address from being exposed to your ISP or any snoopers in the event of a sudden VPN disconnection. 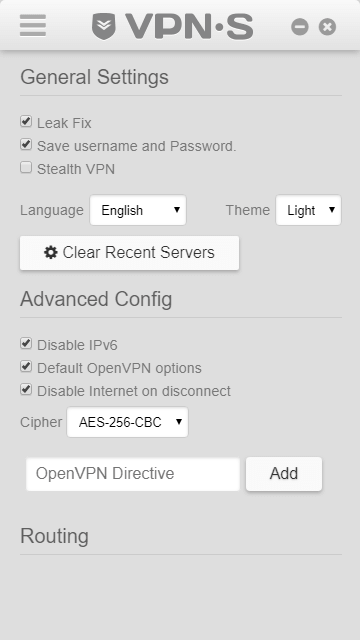 There’s also a feature within the settings menu that allows you to pick and choose which domains are to be routed through VPN tunnel, similar to split-tunneling.

VPNSecure has first-party DNS servers, and throughout our tests we found VPNSecure to be free of any IP, DNS, or WebRTC leaks: 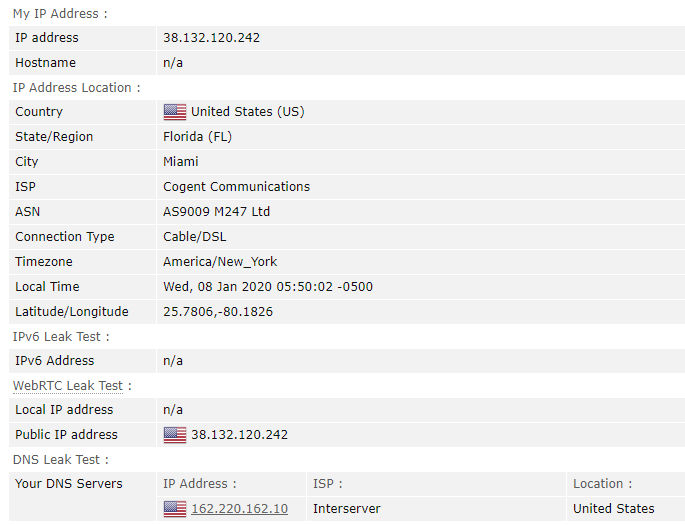 We test from the UK. As you can see from the results, VPNSecure is effectively hiding our true IP address.

Clunky apps, but easy enough to use

How to Install & Set Up VPNSecure

VPNSecure may not have the prettiest apps we’ve seen, but they are simple enough to set up and use, and they come with all the settings you need for a secure connection.

The settings menu includes contextual information to explain each of the features, which is particularly helpful for VPN newbies.

The main screen of the app displays the server locations list, your IP address, and membership type.

Our biggest complaint is the lack of city-level labeling for the server locations, which is frustrating and means that you have to cross-reference the app with VPNSecure’s website to find your desired location.

VPNSecure provides users with 24/7 live chat support, which is ideal if you have a quick question that you need addressing.

The live chat agents aren’t always the most knowledgeable, though. On occasion, they told us incorrect information – about the servers we were permitted to torrent on, for example – but on the whole it was a useful service.

For more technical questions we were directed to email support, which was quick to respond and very informative.

There are loads of setup guides and some troubleshooting information on the website to further help you out.

VPNSecure offers four different pricing plans – from one month to three years. The longer you commit for the cheaper it works out on a monthly basis.

If you want to pay month to month it’ll cost $9.95, which is pretty standard as VPN subscriptions go.

You’ll save 70% if you opt for the longest plan, but like every VPN subscription you do have to pay for the full price up front.

VPNSecure accepts a wide range of payment methods including:

There’s a seven-day money-back guarantee, which is all but guaranteed.

“We will not refund under any circumstances if a particular site or service on the internet does not work, we cannot control what is outside the realm of our VPN network,” states VPNSecure’s Terms of Service.

You can try out the VPN service for free for 30 days but it limits you to just 2GB of VPN data and one server location in the US.

Do We Recommend VPNSecure?

Not while the company is based in Australia.

VPNSecure seems like a decent VPN service until you take into account its jurisdiction, which has the power to force the company to enable logging and user data collection.

It’s not worth the risk until VPNSecure moves its operations to a country that values online privacy.

ExpressVPN is the best VPN we’ve ever tested - not only is it fast, secure, and intuitive, it’s also based in a privacy-friendly jurisdiction. Read ExpressVPN review

With a no-logs policy and top-notch security, CyberGhost is another great option. It’s a far sight cheaper than ExpressVPN too. It’s also ideal for streaming all your favorite shows on Netflix, BBC iPlayer, and more. Read CyberGhost review