Our VPN speed test tool runs 365 days a year, performing over 3,000 weekly speed tests for 15 of the most popular VPNs.

Use our VPN speed test tool to get accurate speed results for some of the most popular VPNs. The tool displays a timeline of recorded speed data to show you how consistently a VPN has been performing over time.

Our test servers are located around the world, and update every six hours. You can also choose between VPN protocols to see how your speeds may vary.

* Provider-preferred protocol. This may not always be the optimal choice for speed or security, and may not be available on all servers. Learn more about VPN protocols.
Note: Data shown here is an average over past 6 months calculated as average of 4 tests performed every 6 hours daily.

We have test servers set up in 11 cities spread across the world, with 15 of the most popular VPNs running on them.

Our test servers send data to one another 24/7, to create an accurate, long-term picture of how fast each VPN truly is.

The data you see on the graphs above is a daily average of all those tests. It’s not perfect, but we think it’s the best tool on the internet for seeing how VPNs actually perform.

We use average speed loss as our go-to statistic as it’s the most informative piece of data for VPN users at home.

You may have different internet speeds at home compared to our 100Mbps servers. If that’s the case, all you have to do is take the speed loss percentage for the VPN you’re interested in and apply it to your own internet speeds.

For example, if a VPN takes 20% off our server’s speeds, you can presume that your home internet speeds of 50Mbps without VPN will reduce to 40Mbps while using it.

Having a very fast VPN is critical, because all internet activity while connected to your VPN is affected.

Online gaming, video streaming and torrenting will be affected the most. However, even everyday tasks like social media browsing or sending large email attachments can be affected, too.

Our tool tests the speeds of the following 15 VPN services:

We selected these VPN providers based on their large customer bases, popularity, and service quality.

It’s by no means a comprehensive list, and we’re always looking to add more VPN services.

Currently, we’re mostly restricted to VPNs that have the right setup (as well as the OpenVPN protocol) for us to add them to our testing infrastructure.

While your city may not be on this list, we hope the global spread is wide enough for you to estimate what your own speeds may be like.

Additional Information: When we review VPNs, we also run manual speed tests, as outlined in our VPN review process.

There can be some differences between the fastest VPNs based on our manual speed tests, and the quickest displayed by our automated tool. 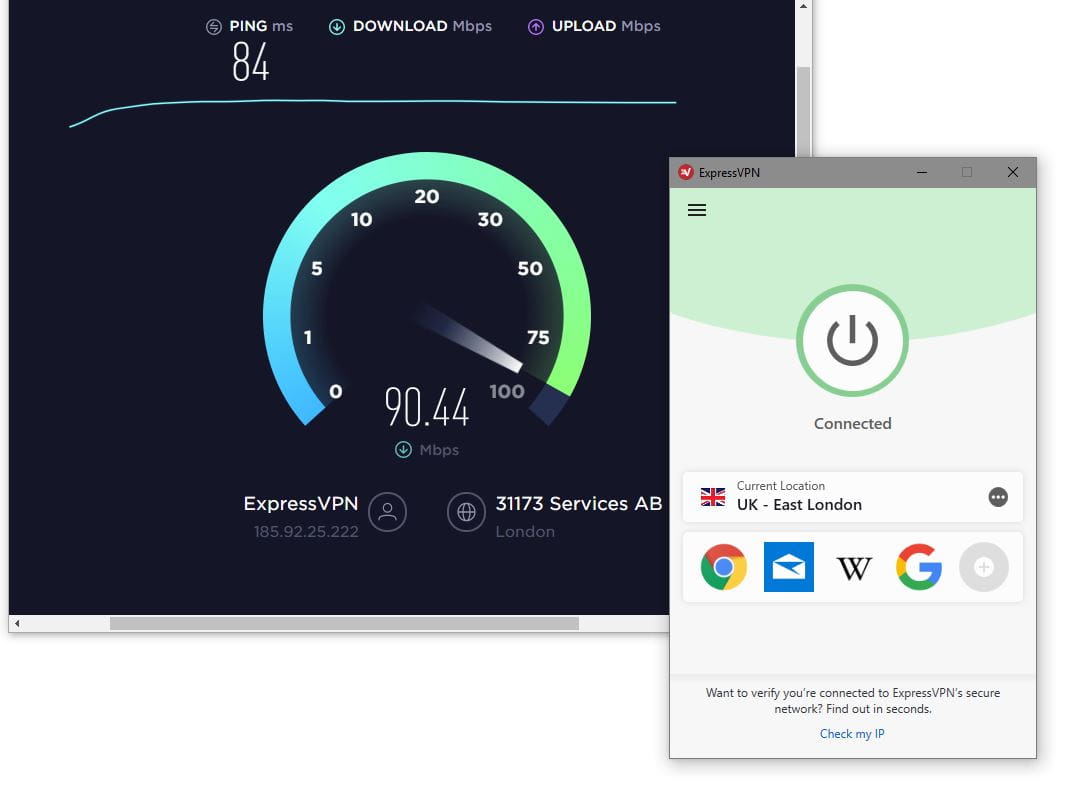 There are two ways you can test your VPN speed yourself: with a tool built into your VPN, or with a speed testing website.

Some VPNs have their own speed test tool within their apps. They may not be available on all platforms, but they are a quick way of understanding your VPN’s speed performance.

For example, ExpressVPN’s speed test tool, shows connection speeds on servers you aren’t even connected to.

The truth is every VPN will slow down your internet speed, because of how VPNs work.

A VPN diverts your traffic to a VPN server first, and then onto a website or application, before the data is sent back to you.

The extra distance traveled has an impact on web speeds. This also explains why your speeds get slower the further the VPN server is from your real location.

In addition, VPNs use high encryption to enhance your internet security. The higher the encryption, the more it can affect connection speed.

The goal when choosing a VPN isn’t to find one that doesn’t slow down your internet, but one which slows it down the least.

That’s why we talk about speed loss percentages, both on this page and in our VPN reviews.

Calculating the speed loss percentage is the fairest way to measure VPN speed. It also lets you apply it to your own internet speed to get an idea of how the VPN may affect it.