With the widespread shift to increased working from home, companies have turned to invasive employee surveillance software to track their staff. We take a look at what the rise of these intrusive tools might mean for the future of remote working. 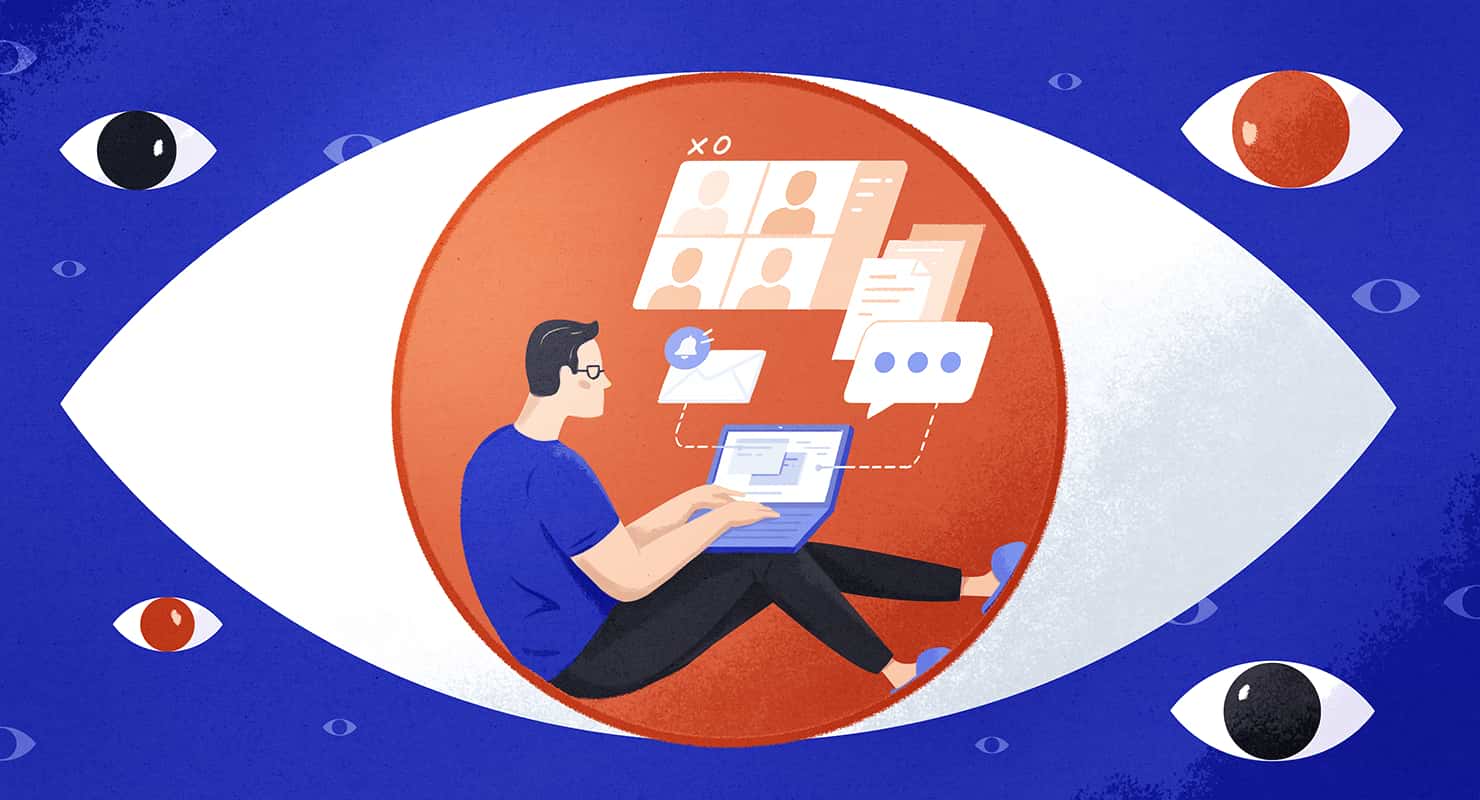 A third of the U.S. workforce shifted to remote work as a result of the pandemic, according to a survey conducted by MIT.[1]

Fearful this could lead to a drop in productivity, employers have turned to remote monitoring software to ensure their staff work effectively from home.

This software is capable of recording almost everything an employee does on their computer, from covert webcam access to random screenshot monitoring.

Demand for employee surveillance software shot up by 80% in March 2020 compared to the 2019 monthly average, the same month lockdowns were imposed. It remained high the following month too, at 65% compared to 2019.

Over two years on, hybrid working is being touted as the future of employment, with its mix of remote work and days in the office.

The prospect of working from home becoming permanent, even if only for part of the week, appears to have prompted a resurgent appetite for this intrusive computer surveillance software.

As the above graph shows, the average monthly demand for employee surveillance software has actually intensified rather than fading away.

That difference is greater still if you discount the initial spike in interest over the first three months of restrictions. Looking at only the months in 2020 after that initial surge, average monthly demand was “only” up 48% compared to 2019.

Why Are We Tracking Employee Monitoring Software Demand?

There has been a huge rise in the range and sophistication of surveillance technologies being adopted around the world and, as remote work looks set to continue for the foreseeable future, invasive employee surveillance may also be here to stay.

As advocates for internet freedom and the right to privacy, we believe this kind of computer surveillance in the workplace should never be normalized. By accepting computer usage monitoring and internet surveillance by employers, the risk is that it will further encroach into all aspects of everyday life.

What Do Employers Want From Monitoring Software?

The following data table shows the ten generic queries related to employment surveillance software with the highest volume of internet searches since March 2020. The terms are ordered largest to smallest.

As lockdowns came into force around the world in March 2020, interest in employee surveillance software surged. Over the ensuing months, that demand settled but at a much higher level than it was in 2019.

Since March 2021 however there has been a sustained upswing in demand once more for employee monitoring software.

After a nine-month period where demand for the software was 48% higher on average compared to 2019, it jumped to 60% in March 2021. It has remained on average at 63% higher than in 2019 since then, a 31% increase compared to the preceding nine months.

The market for employee monitoring software existed long before March 2020 of course and much of the increased interest has been focused around already dominant terms and phrases.

“Employee monitoring software”, for example, was already by far the most popular search up to March 2020 when it more than doubled.

This is a disturbing development as it suggests increasing numbers of employers wishing to spy on their workers who aren’t even prepared to pay for the privilege.

What’s striking about the latest data is that increases in the biggest searches have begun to accelerate.

The radical shift away from office-working has clearly made employers nervous about a reduction in productivity and its potential impact on their business. Greater computer surveillance in the virtual workplace, however, may actually reduce long-term productivity.

The following data table shows the 10 employee surveillance software tools with the highest volume of internet searches since March 2020. The percentage difference columns are based on that month’s search volume compared to the average monthly searches in the preceding year.

Time Doctor was the most in-demand software at the peak of employer demand in March 2020 when interest in the product tripled in comparison to 2019. This caused it to jump from third to the most in-demand employee monitoring software above its previously more popular rivals Hubstaff and FlexiSPY.

Over time however, Hubstaff has re-established its dominant position with the highest overall demand since March 2020, at a monthly average 104% higher than in 2019.

Overall, our findings show that the employee surveillance market is an increasingly concentrated one, with the top three software products accounting for two-thirds of global demand, up from 60% in September 2021.

The WorkPuls software experienced the highest relative increase in demand, with a 375% rise since March 2020, followed by DeskTime which experienced a 226% increase.

Not all of these employee monitoring software products offer the same functionalities and some are considerably more invasive than others.

What is a VPN?

VPN (Virtual Private Network) software encrypts your internet connection and routes your internet traffic via a proxy server, hiding your true IP address in the process. A VPN is typically used to evade monitoring of internet activity, access blocked websites and mobile apps, and prevent man-in-the-middle attacks on public networks.

Should I Use A VPN?

A reliable VPN service will prevent employee monitoring software from logging your browsing history. Rather than capturing your browser’s DNS lookups and the IP addresses of websites you visit, the employee surveillance tools will only be able to record that you visited the proxy server of your VPN service. Any attempts at inspecting traffic will also fail due to encryption.

Despite the effectiveness of a VPN in hiding your browsing history, it’s not possible to obfuscate its use. This will make it clear to your employer that you are trying to evade their surveillance measures, which will likely result in negative consequences.

Nor will a VPN help with other aspects of employee monitoring software, such as keystroke logging, IM monitoring or webcam surveillance.

The following data table shows the 26 most popular employee surveillance software products and their respective functionalities.

Our analysis of the software revealed the following:

Using our global monitoring data, we analyzed over 200 terms related to employee monitoring software, taking into account both generic and brand specific queries.

We also calculated demand based on the average monthly internet search volume over the course of 2019. This provided a baseline figure with which we could compare demand during the period of global lockdowns and social restrictions from March 2020 onwards.

This report is updated quarterly, typically in February, May, August and November.