Enter the URL of a website to check in real-time if the domain is blocked or banned by the Great Firewall of China.

How Does This China Firewall Test Work?

This tool makes use of ViewDNS.info’s Chinese firewall test API. To find out if a domain is blocked in China, simply enter the domain into the tool. It then contacts the API and checks Chinese servers for the domain’s availability in real time.

The test uses servers throughout China in five different locations: Beijing, Shenzhen, Inner Mongolia, Heilongjiang Province, and Yunnan Province. Each server will check if the website you’ve entered is accessible and returning a valid web page in China.

The easiest way to access censored websites in China is to use a Virtual Private Network (VPN).

VPN software lets you connect to a server located outside of the country you’re in, temporarily replacing your IP address and encrypting all your traffic.

By using an effective VPN, the Great Firewall of China will be unable to monitor and block your connection requests.

Alternatives to VPNs exist, however they’re not as effective. For instance, web proxies are slower and less reliable than VPNs.

Also, the Tor network is blocked in most of China, so you can’t rely on it to regularly unblock censored websites and services.

Unlike these alternatives, a reliable VPN will have a dedicated application for each of your devices, and your download speeds will only be slightly affected. It’s usually cost effective, too.

Which VPNs Work to Unblock Websites In China?

Not every VPN works in China. Over the years we’ve tested hundreds of VPNs and found that the hardest task for them all is consistently bypassing the Great Firewall of China.

The Great Firewall is constantly detecting and blocking VPN traffic. The only VPN services that work are those that invest serious time and money into bypassing the Firewall.

In other words, the Great Firewall is extremely sophisticated, and only the very best VPNs for China will beat it.

Our testing confirms that Astrill is still the most reliable VPN for China. Over the last year of testing, it has worked with a 100% success rate, which no other VPN has managed.

This success is mostly down to Astrill’s StealthVPN protocol – just select that before browsing and all of China’s blocked websites become accessible. It has servers in nearby Hong Kong and Japan, too, so its average download speeds stay fast.

Here’s a video of us testing Astrill VPN in China: 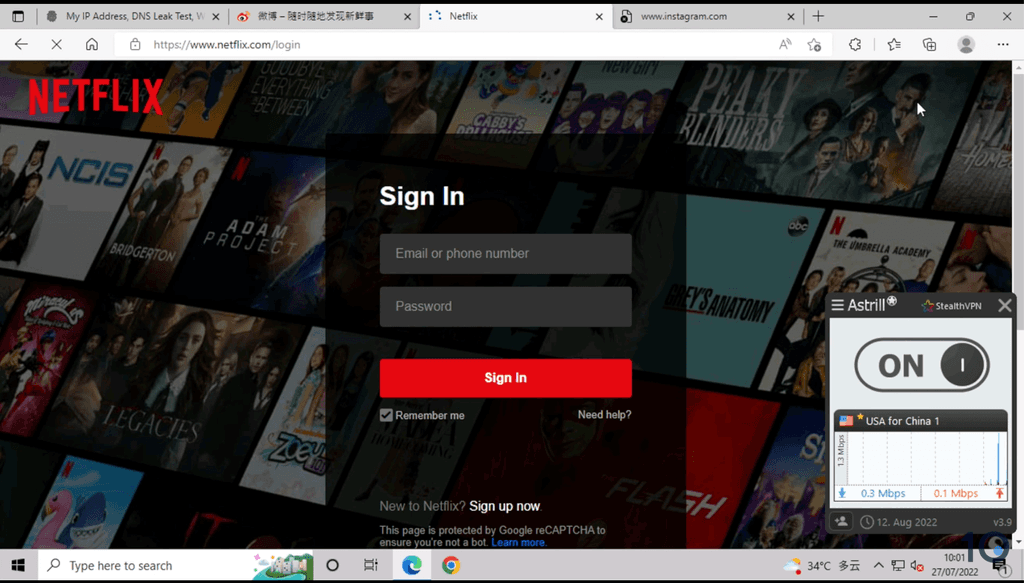 Astrill is expensive, but it almost guarantees to unblock the internet in China.

We also recommend Windscribe as the best free VPN for China. It has only faltered a couple of times in China over the last year.

However, Windscribe slows your internet connection down more than Astrill does, and its free app only has one server close to China (Hong Kong).

It’s a high-rated free VPN for a reason, and we love that it includes both StealthVPN and WStunnel options for both free and paid users.

Below is a video of us using Windscribe in China: 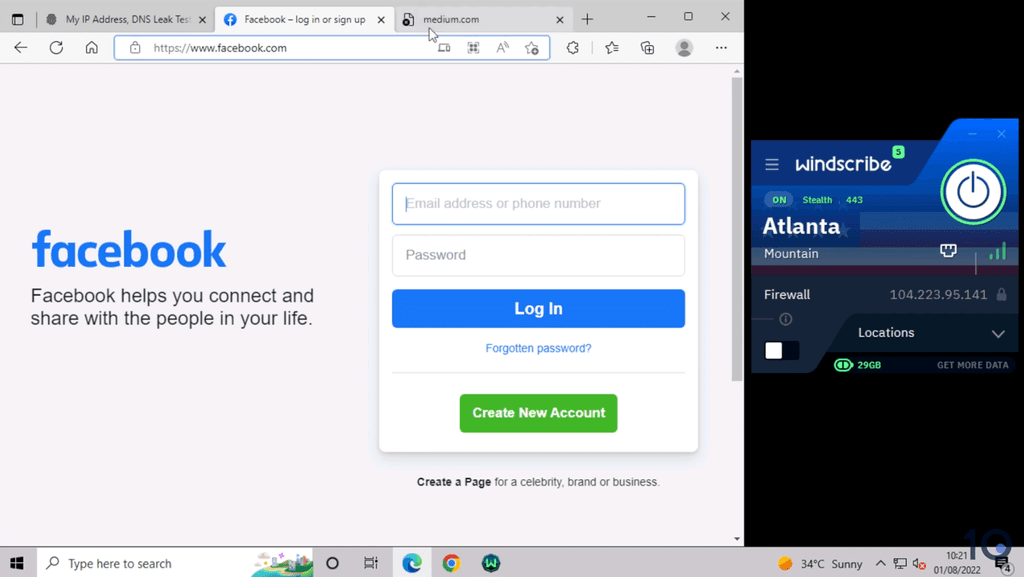 Windscribe Free isn't as reliable as Astrill, but it's impressive that a free VPN works in China at all.

What Is the Great Firewall of China? 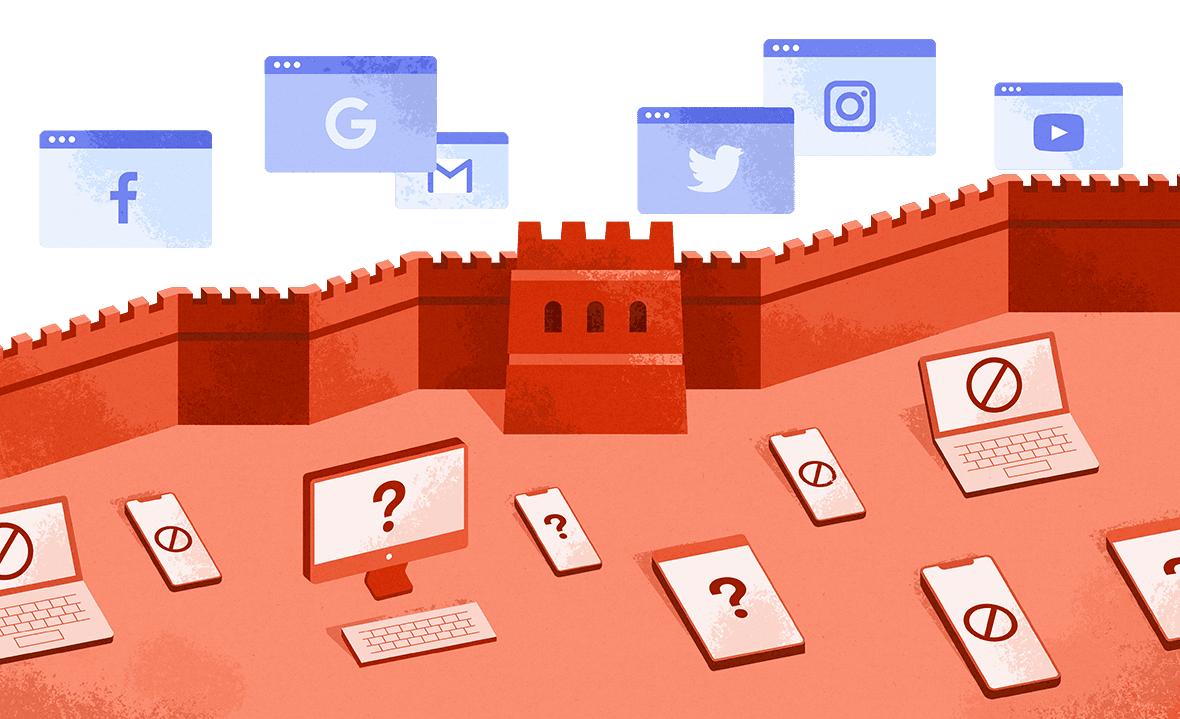 The Great Firewall of China (GFW) is the nickname given to China’s internet censorship system, which works by limiting, slowing, or completely blocking access to specific websites, applications, and web services.

Since 2003, the GFW has given Chinese authorities the power to monitor and restrict internet access in mainland China. It blocks roughly 250,000 web domains, including 135 of the world’s top 1,000 websites.

It is by far the strictest and most advanced internet censorship system in the world, and beating it is extremely difficult.

From a legal standpoint, the Great Firewall is backed by the Cybersecurity Law of the People’s Republic of China. Passed in 2017, this law combines several historical pieces of legislation to create one single definitive set of laws governing internet censorship in China.

Summarized, the Cybersecurity Law of the People’s Republic of China states that:

These rules are enforced by a mixture of real workers and automated software. The Chinese government is said to currently have up to 50,000 employees working on internet censorship.

That’s still not enough to effectively censor the entirety of the internet, though: it’s total compliance from ISPs (Internet Service Providers) which really bring the Great Firewall to life.

In order to avoid huge fines and even prison sentences, Chinese ISPs deploy advanced technologies to ensure that sites which need to be blocked remain inaccessible to everyone inside of China.

These censorship technologies include:

All of these techniques combine to make an extremely complicated and efficient censorship apparatus. It’s understandable why so many VPNs struggle to beat it – even some of the best VPN services on the market.

Why Are So Many Websites Blocked in China?

There are so many websites blocked in China because government guidelines for what is and isn’t legal are so broad and vague.

There are many types of content outlined in various Chinese state laws, but websites are mainly blocked in China if they host or promote:

However plenty of other websites which don’t appear to violate these standards have also been censored in the past. Email providers like Gmail and Hotmail have been blocked, as well as social media sites like Facebook and Instagram.

The original legislation used as the basis for this censorship simply stated that anything considered to be “subverting state power, undermining national unity [or] infringing upon national honor and interests” would be blocked. This gives Chinese web censors a very, very large scope to ban almost anything it wants to.

Which Websites Are Blocked or Banned in China?

There are more than 250,000 websites blocked in mainland China, including some of the most popular websites in the world. These include Google, Facebook, Wikipedia, Netflix, Reddit, and many more.

In fact, there are so many websites banned in China that it’s almost impossible to list them all on one page, which is why the Great Firewall test on this page is so useful.

However, there are several types of websites and plenty of big names which are consistently blocked to Chinese internet users.

Here’s a comprehensive list of popular websites that are blocked in Mainland China:

China has its own heavily-monitored social media websites, such as Sina Weibo. Almost every other popular social media site is banned, including:

These sorts of sites are naturally filled with information that the Chinese government disapproves of. As a result, almost all video blogging and content creation is limited to sites like Youku. Banned foreign sites include:

Baidu is often referred to as the Chinese answer to Google. It is by far China’s most popular search engine. Interestingly, Microsoft’s Bing search engine is not banned as it cooperates with the Chinese government’s requests for censorship.

The most popular blocked search engines are:

Almost every global news source is blocked in China due to critical coverage of the country’s government. The list is hundreds-long, but the most popular banned international news sites are:

Messaging apps are seen as an efficient means to sow dissent and mobilize collective action (like protests or riots). Chinese citizens mostly use WeChat, which is censored and unencrypted. Banned messaging services include:

Most popular video and audio streaming services are either unavailable or outright blocked in China. They all either host content critical of the Chinese government or could easily be used as broadcast platforms for such material. The most popular banned streaming websites include: