Astrill VPN is an expensive VPN service with strong security and a decent array of advanced features. Its stealth protocol is excellent for use in China and it also works to unblock US Netflix, but we recorded slow connection speeds. We recommend Astrill VPN for use in censored countries, but there are better options available for casual VPN users.

Astrill VPN may not be the first name to come to mind when you’re looking for a VPN, but it’s certainly one to consider.

It’s one of the most advanced and secure VPN services available – that’s we found in our testing and by the end of this Astrill VPN review you’ll understand why, too.

You’ll also find answers to all the most pressing questions, including:

Keep reading to learn everything about this VPN provider, but if you just want a quick summary of our findings, take a look at the overview below.

Sometimes you’re better off looking past the big names and making a slightly less popular choice. If you want to use a VPN to beat censorship in countries like China, Astrill VPN is that choice.

In fact, it’s one of our top recommendations for use in high-censorship countries – you can read why here.

First of all though, lets see who owns Astrill.

Astrill is a registered company based in the Seychelles. It was founded in 2009.

Seychelles is a great place to base a VPN service, as it sits outside privacy-infringing information-sharing agreements and has no legal obligation to share information with other nations.

Even if a law enforcement agency requested details of Astrill’s users, there wouldn’t be any to give as it doesn’t store personally identifiable information.

While this looks scary, this is purely to maintain its high level of performance and limit the number of devices allowed on a simultaneous connection. This information is only available for the duration of your VPN session and as soon as you disconnect it is permanently deleted.

We like this approach as it maintains the apps strong performance but keeps you safe.

More so, the data logs that Astrill collects are not personally identifiable information and can be deleted from Astrill’s member zone at any time you wish. They are used for customer support purposes and crucially do not contain any personally identifiable information. If you don’t use the software for 30 days, these logs are wiped automatically. 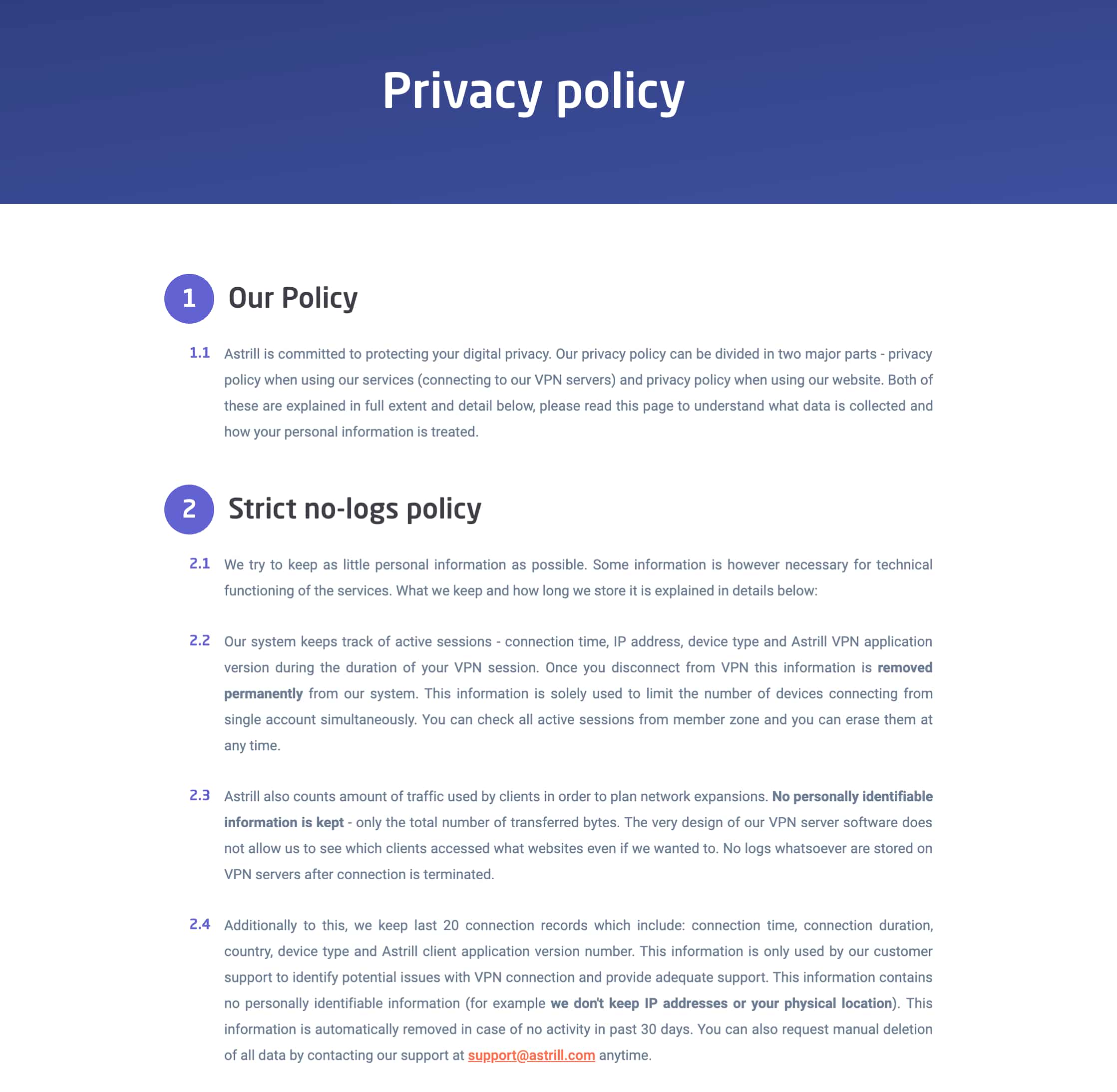 Speeds could be better

Astrill VPN is fast enough, but it’s nowhere near the fastest VPNs.

However, it does deliver impressive long-distance speeds when connecting out to the US and Singapore.

It’s also a decent choice for torrenting and steaming, but we would’ve liked to see faster same-country speeds.

However, latency really failed to impress with an average of 10ms, which will put off most gamers.

When connected to Astrill VPN:

Astrill doesn’t quite measure up to the best VPN providers, but speeds are rarely slow, with barely any connection drops and little fluctuation across its global VPN network.

We put all of the VPNs on the site through a rigorous speed testing schedule to determine the average speeds from multiple locations across the globe.

These are the average speeds we recorded from London to the below locations:

Servers in 64 countries but only 355 IP addresses

Astrill has a mid-sized VPN server network of 62 countries, covering popular locations across Europe and North America that should please most VPN users. 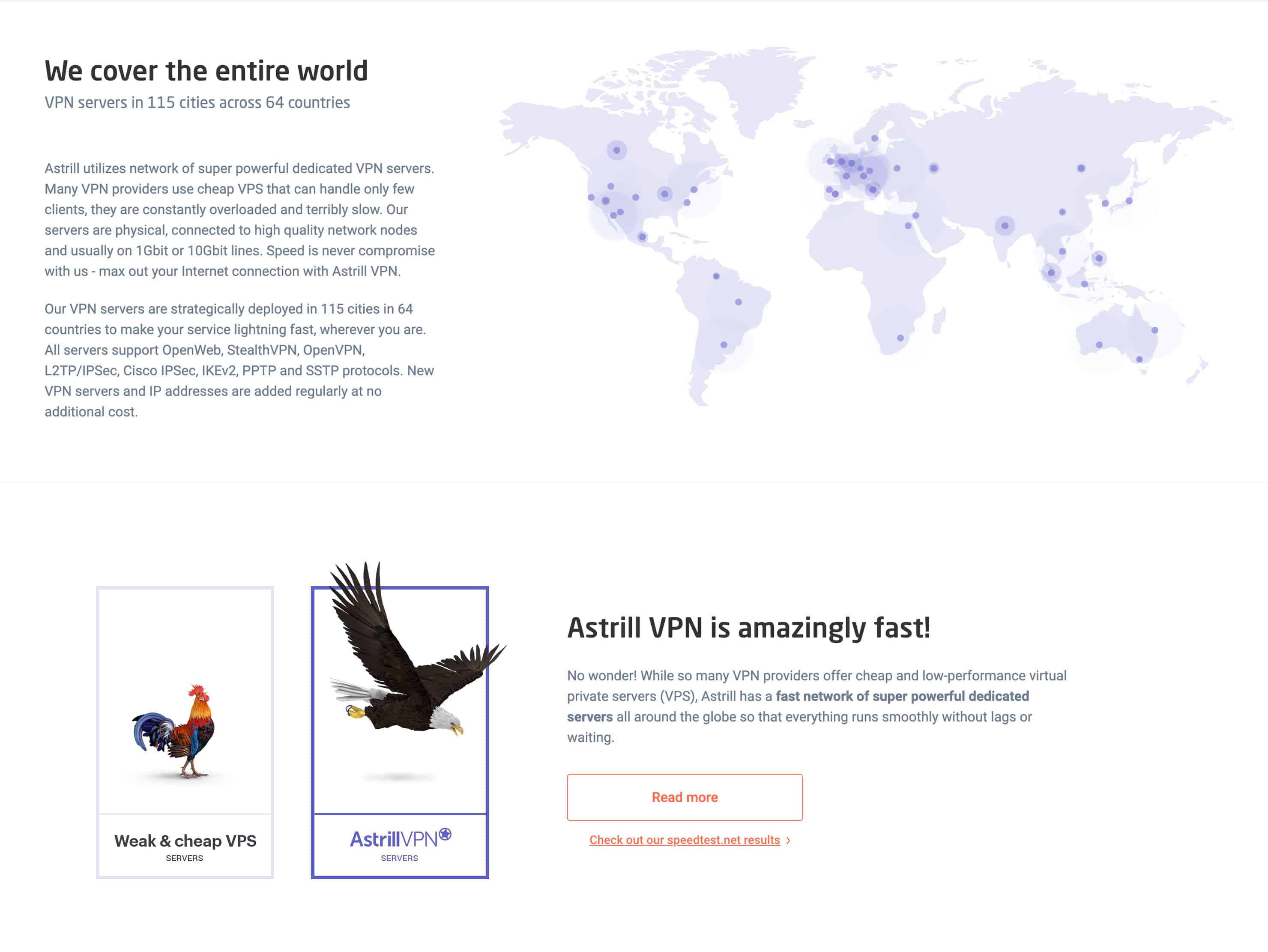 However, Astrill lacks more distant locations such as South America and Africa, with solely South Africa and Egypt representing the continent.

In terms of city-level choices, Astrill provides them in 14 different countries, which is a pleasant surprise. There are its city-level server options:

Astrill has some of the best coverage in the US, and you won’t struggle to find high-performance servers in Europe or the Asia Pacific region either.

In Australia, on the other hand, Astrill only has servers in the South West of the country (in Casula, Sydney, and Melbourne) and is not present in Perth. The same applies to Canada where Vancouver is missing.

Another problem is Astrill’s 355 IP addresses, which is extremely limited compared to some of the top VPNs that can feature over 5,000 in some cases. The more IP addresses, the smaller the risk of traffic congestion.

Astrill doesn’t have any major issue unblocking popular streaming services and we’ve had no problems watching Netflix through its US and UK servers.

Streaming BBC iPlayer, however, is hit-and-miss due to the BBC’s recent crackdown on VPN traffic – some days you can unblock it through Astrill’s multiple UK servers, and other days it’s completely blocked.

The problem with Astrill is that it’s not very fast, and that’s why it isn’t one of our recommended VPNs for Netflix or for BBC iPlayer. With a near-50% speed loss, there are better VPNs for streaming out there..

Astrill could be a very good choice for torrenting and Kodi.

It features P2P-optimized servers (marked with a yellow star) that allow port forwarding, a kill switch and AES-256 encryption. We also found no compromising DNS leaks so you’re privacy is take care of. The app even comes with DNS Leak Blocking features, too.

Its logging policy is also a safe one, only storing data while you’re connected and deleting it once you terminate the VPN connection.

If only the same country speeds were faster, though. Until we see the speed loss get closer to 10%, you’re better off using one of these fast and private P2P VPN services.

Still a popular choice for use in China

Astrill’s stealth VPN protocol provides an additional layer of obfuscation, which currently beats the Great Firewall and get users online in China.

Another positive aspect is Astrill’s number of city-level servers in neighboring Taiwan. Having these servers close to China helps achieve faster speeds.

There are also VPN servers optimized for connecting out from China and it’s no surprise that it’s our second-favorite VPN for China.

Importantly, remember that you’re not eligible for Astrill’s seven-day free trial if you sign up from China, so make sure you sign up before you travel there if you want to take advantage of the free trial.

Astrill works on a range of custom apps for platforms including:

Astrill VPN also works on an extensive range of devices and with the help of  several setup manuals, you can use the VPN with your Amazon Kindle Fire, Windows Phone or BlackBerry. There are also instructions on how to manually configure your existing router to support the software.

As for simultaneous VPN connections, Astrill allows you to connect with five devices at any one time, which is fairly standard.

The good news is that you can use Astrill with Xbox, PlayStation, and other game consoles, as well as streaming devices, by connecting them to a configured router. You can even buy pre-configured VPN routers from Astrill’s website.

But, we are disappointed at the lack of an Amazon Fire TV Stick custom app, especially when a number of rival VPN services, like IPVanish, make this available to their subscribers.

Astrill does not provide a browser extension for Chrome, Firefox, Safari or any other web browser.

If you want a lightweight VPN browser experience, there’s a whole selection of excellent VPN services that provide either Chrome extensions or Firefox addons.

There’s no other way to put it, Astrill is a fantastic choice for privacy.

OpenVPN, the most secure protocol, is easily selected and encryption is AES-256, a cipher considered unbreakable. There is also the rare inclusion of WireGuard, a protocol for optimal performance.

What’s more, Astrill automatically forces all of your traffic through its own DNS servers, meaning there is no chance it will be routed via less secure third-party servers.

We also love the split tunneling feature, allowing you to protect your browsing without losing access to local network devices, such as printers or smart TVs.

Not the prettiest, but still simple

How to Install & Set Up Astrill VPN

Astrill has never had the most attractive set of apps, but they make up for it in functionality and quality.

Real-time information about your connection is available to view and a welcome addition, and servers that work with torrents are helpfully marked with a yellow star for P2P applications.

Additional settings can be found behind the burger menu (three horizontal lines), with leak blocking and a long list of DNS servers to choose from. Split tunneling, referred to as Astrill Smart Mode, is easily accessible too.

Watch out – OpenWeb is the default protocol rather than OpenVPN. You have to change it in the settings.

The mobile apps are more attractive, but lacking the important privacy features of the desktop. If you want a VPN primarily for a mobile device, we have put together a list of our top picks for both Android and iPhone.

Astrill’s customer support delivers in most instances, even though the live chat feature was buggy. Astrill support agents often tried to avoid answering questions and sent us back to the website, which was disappointing.

You’re better off ignoring Astrill’s live chat and simply emailing support – we got a detailed response within a few minutes.

The support on the site is extremely useful, offering FAQ’s and video tutorials explaining some of the more advanced features.

There are also a huge amount of manual setup guides on the Astrill Wiki, which help set it apart from other providers. It’s also refreshing to see a contact phone number, if you’d rather speak to a human being.

Very expensive, even for long-term plans

Astrill offers a range of pricing plans that offer the same features but get cheaper on a monthly basis the longer you choose.

You might also want to take advantage of Astrill’s seven-day free trial so you can try it before you buy it. You don’t need to insert your payment details to download the free Astrill trial so there’s no chance of automatically upgrading you to a premium subscription should you forget to cancel. However, this is not offered to users in China, and it comes with a slightly reduced number of VPN servers.

It’s a particularly useful trial as Astrill has a strict no refund policy – all sales are final. This is a far cry from the no-questions-asked 30-day money-back guarantees that we frequently see with the likes of ExpressVPN and other top-tier providers.

Do We Recommend Astrill VPN?

Ultimately, Astrill serves a very specific purpose – to beat online censorship – and it’s close to being the very best at it.

We highly recommend this VPN if you need to use it to bypass internet blocks, all while keeping your traffic (and identity) secure.

Just beware that Astrill is fairly expensive and it doesn’t offer a refund, so you need to be sure it’s the right VPN for you before you buy.

It's easy to recommend the number one VPN in our testing, but ExpressVPN is an especially good alternative to Astrill as it also deals with censorship effectively and easily. Read ExpressVPN review

Already use Astrill VPN? Tell us what you think.