Only the best VPNs for China can bypass the GFW and access the open internet. Chinese content filters block most VPN traffic, unless a VPN uses cutting-edge obfuscation technology to disguise its traffic.

The VPNs we recommend are verified to work reliably in Beijing, Shanghai, and elsewhere in mainland China. They unblock Google, Instagram, Twitter, and many other websites.

Based on encryption, obfuscation, and reliability, the best paid and free VPNs for China are:

We’re confident the VPNs above are the most effective and reliable to access the open internet in China. We run weekly tests using our Shanghai test server to verify which VPNs still work.

Below is an overview of our key China VPN testing data:

The table below compares VPNs for China based on their access reliability and obfuscation technology. You can see which popular VPNs currently work in China, and which don’t.

We collected this data testing VPN access from our Shanghai test server.

The chart below summarizes how the VPNs we recommend for use in China perform in our key testing categories:

EXPERT ADVICE: Download your VPN before traveling to China. Most VPN websites are blocked in China, and safe-to-use VPN apps are banned from Chinese app stores.

The Best Paid & Free VPNs That Work in China

How We Test VPNs for China

We test for a number of key decision-making factors when testing the safest and most reliable VPNs for China.

For China specifically, we test for:

Here’s a breakdown of exactly what we test for when recommending VPNs for China, along with how much of the overall rating each category makes up:

The most important test for a VPN in China is whether it can bypass the Great Firewall (GFW), a name given to China’s web censorship infrastructure.

We operate a virtual Windows 10 PC installed on a server near Shanghai to determine whether or not a VPN actually works in China.

When testing a VPN, we attempt to connect to a server outside of mainland China using every available protocol on a variety of servers.

As part of this process, we also follow any additional instructions from the VPN itself, including downloading special versions of its apps.

We collect this data once a week for 15 popular VPN services and use it to track the percentage reliability over the last three and 12 months.

We believe this is the most accurate way to predict the long term performance of a VPN in China from outside the country.

The percentage uptime of each VPN over the last 12 months is what determines its rating in this category. For example, if it has worked 82% of the time, it will get a rating of 8.2/10.

Because we connect remotely from outside of China, our connection speeds are throttled. As such, we cannot accurately analyze other performance data, like upload and download speeds or latency.

OpenVPN Stunnel and XOR are both effective options we reward. Many VPN services also offer their own proprietary obfuscation protocols.

We also test for the ability to actively toggle obfuscation as a factor for VPNs in any censored country.

Logging is an important indicator of a truly private VPN.

In China, where using unauthorized VPNs is banned, it’s important your service doesn’t log your connections in the country.

We don’t recommend any VPN that keeps activity records in China, or has ties to domestic businesses or the government.

Minimum Requirement: Download speeds over 40Mbps on connections to nearby countries.
We Recommend: 60Mbps or faster on long-distance connections.

Speed is also an important component of choosing a VPN for China, as speeds in and out of the country are bottlenecked and can be very slow.

As we cannot test speeds in China directly, speeds in nearby countries (ideally Hong Kong, but also other countries in East Asia) are taken as an indicator of performance.

Having nearby servers is a good indicator of the quality of performance you can expect from a VPN in China.

Servers in nearby Asian countries, especially in Hong Kong, are generally the best choice for speed. We also test servers in Singapore, Japan, Thailand, Korea, Vietnam and more.

Servers on the US west coast can also deliver good speeds from China. They’re also ideal for accessing US streaming services.

VPNs That Don’t Work in China

The majority of VPN apps do not work in China. This includes some of the best and most popular VPNs.

China actively tries to identify and block unofficial VPN connections. For VPN to work in China, it needs to have obfuscation tools or stealth protocols as a minimum.

Most of the VPNs that do work in China put a significant amount of work and investment into beating the censors.

Here are some popular VPNs that do not work in China:

The Great Firewall of China 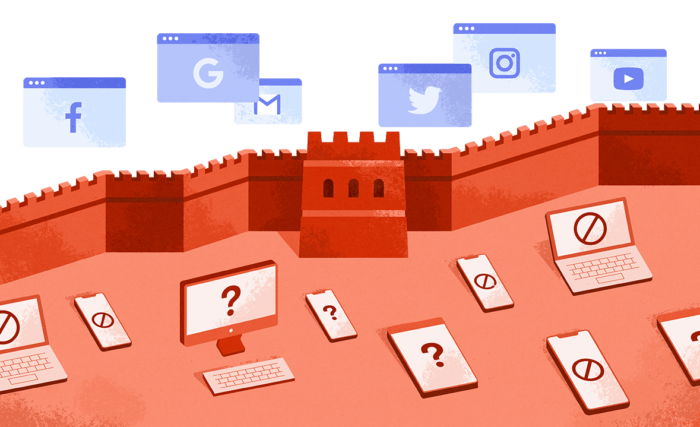 The Great Firewall of China (GFW) is a nickname given to China’s internet censorship system, which functions through legislation and internet filtering technologies.

Since 2003, it has given Chinese authorities the power to monitor and restrict internet access to anyone based in mainland China (Hong Kong and Macau are exempt).

The Great Firewall is designed to regulate and censor the Internet within China’s borders. It does this by limiting, slowing, or completely blocking access to certain foreign websites and services.

How Does the Great Firewall Work?

Unlike the online censorship in some other countries, China’s Great Firewall has been around since the origins of the internet. As a result, it is built into the basic internet infrastructure of the country.

The Great Firewall uses a combination of five methods to block websites and apps:

The GFW doesn’t operate in a single or straightforward way, and the Chinese Communist Party (China’s ruling political party) maintains a high degree of secrecy about how its censorship functions.

From the outside looking in, these are some of the common methods used by the Great Firewall to block websites and services.

By combining these technologies and constantly upgrading its methods and infrastructure, China has managed to build the most effective and dynamic system of online censorship in the world.

Here’s a more detailed explanation the five methods used to block or censor content in China:

China builds a blacklist of IP addresses which correspond to banned websites. If it sees you are trying to connect to these IP addresses, your traffic will simply be blocked.

If an IP address associated with a non-approved VPN are discovered, it is blocked too.

When you connect to a website, the Domain Name System (DNS) is used to establish a connection between your device and the website’s IP address.

China can set DNS servers up to give faulty information for some DNS requests, which will prevent you from establishing a connection with the website.

As well as blocking specific IP addresses, the GFW scans URLs for sensitive keywords. This means you may be able to access one part of a website, but not the pages that refer to content that the government would rather keep you from seeing.

The Great Firewall can look through blocks of unencrypted data to identify flagged keywords using a process known as ‘deep packet inspection’. It can then stop any unwanted packets from being transmitted.

After identifying an unwanted connection, China can inject reset packets, to break the connection between you and the website you are visiting for a period of time.

Much of the censorship carried out as part of the Great Firewall isn’t automated. The government hires staff specifically to scan the internet for content to add to its blacklist.

Does the Great Firewall Block Every VPN?

The Chinese government has been blocking VPNs to some degree since 2011, but this process has intensified since 2017 and early 2018.

During that time, the Chinese government ordered the Apple App Store to remove all VPN applications and threatened to block all VPN services that were not government-approved.

While it wasn’t successful in blocking all VPN services, many popular services are now unusable.

Even the VPNs with the most effective obfuscation tools occasionally fall victim to the Great Firewall’s censorship.

During times of political unrest, or on significant anniversaries such as June 4, the Chinese government cracks down on VPNs more intensely. Connecting to a VPN server will be harder, but the best VPNs usually find a solution reasonably quickly.

How Do the Top VPNs Beat the Great Firewall?

The encrypted traffic is routed to a VPN server in another country before going to the website or service that you want to access. This hides the destination of the internet traffic from the Great Firewall, too.

The Chinese censors have learnt to identify some VPN connections.

Using Deep Packet Inspection, the censors can see certain indicators of VPN traffic, such as characteristics of particular VPN protocols.

As a result, the most reliable VPNs for China now use obfuscation technology to scramble VPN traffic and make it look like normal HTTPS internet traffic. This helps the data to go undetected. 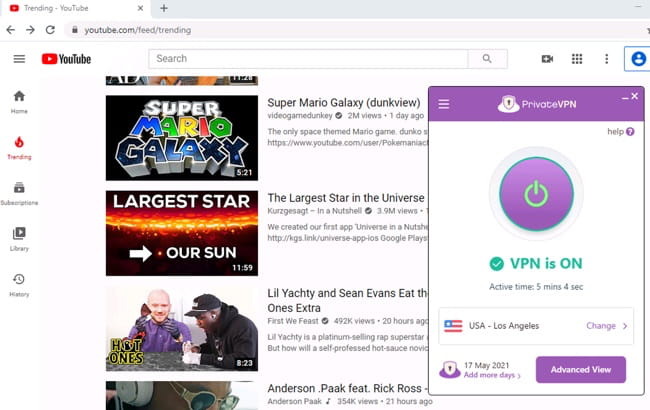 This means that one day a VPN server might work, and the next day it won’t. Some trial and error might be required when this happens.

What Is VPN Obfuscation?

Obfuscation technology disguises your VPN traffic so it blends in with other forms of online traffic. Normal VPN encryption stops observers from reading your traffic, but obfuscation stops them from knowing it is VPN traffic at all.

A VPN that offers obfuscation technology will allow you to select an obfuscation protocol from the settings menu.

Without obfuscation, the Chinese Firewall will detect VPN traffic (through deep packet inspection) and block it.

The two most common ways to obfuscate VPN traffic are:

Which Websites are Blocked in China?

Many popular websites and apps in the world are blocked in China. However, this censorship varies from day to day and region to region.

The Google Play Store isn’t available at all in China, and Apple’s App Store complies with Chinese laws. This means it’s highly restricted and does not offer VPN applications.

You can use greatfire.org and GFWatch to check if specific websites are blocked.

Some of the most popular websites and services unavailable in China include:

Many VPN websites and applications are also blocked in China, which is why it’s important to set up your VPN apps before you travel.

If you’re using an Android device, you can download APK files directly from some VPN websites – although they too may be blocked. 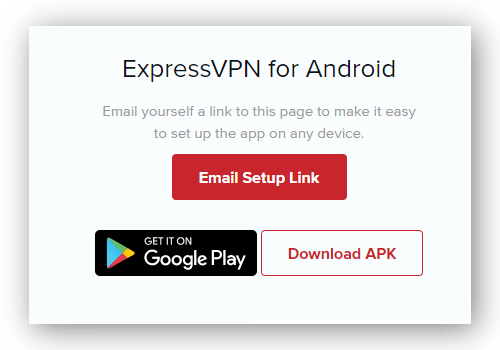 Be wary of downloading this type of file from third-party websites, though, as they can be infected with malware.

The Great Firewall can also block access to anything that requires access to the internet. This includes email (if you use Gmail) and blacklisted mobile apps.

If your mobile app needs to connect to a blocked site or service to operate, it won’t work in China.

Are VPNs Legal in China?

Only government-approved VPNs are legal in China. All VPN services must be officially sanctioned by the Chinese Communist Party (CCP) before being given permission to operate.

To receive this permission, VPN services must agree to conditions such as data logging and sharing data with local authorities, making the VPN useless from a privacy perspective.

Using an unauthorized VPN can technically result in fines of up to 15,000 yuan (approximately $2,200). However, there are very few instances of VPN users actually being charged or fined –particularly foreigners.

If you choose a legitimate, secure, and safe VPN for China it’s highly unlikely that authorities will be able to identify your VPN traffic. If they do, it’s very unlikely you’ll get into trouble for using it.

It’s important not to use an unsafe VPN with poor encryption and weak security. These VPNs are likely to leave your activity exposed. For example, the popular Hola VPN is unsafe to use in China.