Turkey has been ramping up its internet censorship and surveillance regime for years.

Unsurprisingly, almost 350,000 websites are blocked in Turkey. Using a dependable VPN is therefore vital to access the free internet from Turkey, and avoid the Turkish government monitoring your web activity.

The five best VPNs that work in Turkey are:

We selected the above VPN services using our testing methodology specific to Turkey.

If you are traveling to or living in Turkey, the VPNs we recommend above will allow you to access censored media, visit banned sites like Wikipedia, and communicate privately.

Luckily, Turkey hasn’t been able to block VPNs as effectively as China or the UAE. With the above VPNs, you can avoid government and ISP surveillance, and stream geo-blocked content.

The 10 Best VPNs for Turkey Compared

Use the table below to compare the best VPNs for Turkey based on their ability to bypass web censorship, obfuscation technology, logging policy, and number of nearby servers.

The table below compares how the best Turkey VPNs perform in five important testing categories:

What Is the Best Free VPN for Turkey?

Windscribe is the best free VPN for Turkey. In our testing, it has been the only free VPN that consistently works to bypass aggressive censorship and website blocks.

The free version of Windscribe comes with limited server options and a 10GB data limit, but its encryption is secure and its speeds are reasonably fast compared to most free VPN services.

If you choose to use Windscribe, it’s best to download the app before you arrive in Turkey.

In most cases, we don’t recommend using a free VPN in highly-censored countries. While there are a handful of good free VPNs, the vast majority come with security flaws, poor privacy policies, or they don’t encrypt internet traffic.

Free VPNs are also much less likely to come with the obfuscation technology necessary to avoid detection by an ISP or the Turkish government.

Are VPNs Banned in Turkey?

Only specific VPN services have been banned in Turkey.

The government uses deep packet inspection (DPI) to inspect, identify, and block traffic if it belongs to one of these VPN services.

Turkish censors use DPI to block VPN traffic when it identifies it, but it is nowhere near as effective as China’s VPN detection infrastructure.

For this reason, most banned VPNs using obfuscation technology still work in Turkey, including both ExpressVPN and VyprVPN.

Is it Legal to Use a VPN in Turkey?

It is completely legal to use a VPN in Turkey. Though banned websites are blocked, people are not held legally responsible for attempting to access them using a VPN.

Something to keep in mind, though, is that whatever you do while using a VPN in Turkey is still subject to Turkish law.

This includes Article 301, which legislates prison sentences of up to two years for anyone who “publicly denigrates the Turkish nation”.

This law has been used to actively punish criticism of the Turkish government, its leaders and its actions.

Beyond this, there have been large numbers of arrests in recent years over Twitter comments critical of the government.

Which VPNs Are Banned in Turkey?

Some banned VPNs have the capacity to overcome Turkey’s censorship technologies, but others don’t.

These popular VPN services do not work in Turkey:

If your VPN isn’t working in Turkey, one possible workaround is to switch to a VPN that offers port forwarding.

HTTPS traffic, though, generally passes through TCP port 443. If you can get your OpenVPN traffic to pass through this port it is effectively disguised as normal traffic.

You will need a VPN provider whose client includes port forwarding to do this. To learn more about port forwarding, read our list of the best VPNs for torrenting.

It can be difficult to download a VPN in Turkey because the government blocks VPN websites.

If you are planning on travelling to Turkey, we recommend downloading a VPN before leaving your home country to guarantee you can use it once you are there.

If you haven’t done this, or you are from Turkey and don’t have access to the open internet, you can use a proxy to access the website of your chosen VPN provider and download their app.

Fortunately, only major VPN services have actually been blocked, so it is generally possible to find a safe download link.

If your chosen VPN provider has been blocked, contact their customer support. The top VPNs for Turkey will usually provide an alternative URL that has not been banned by the censors.

How to Get a Turkish IP Address

It’s extremely easy to get a Turkish IP address using a VPN. In fact, it’s much easier than trying to use a VPN from within Turkey.

First, make sure you subscribe to a VPN with servers in Turkey or nearby countries. The VPN services in this article do, but you can also check server locations on a VPN provider’s website.

To get a Turkish IP address:

It’s as simple as that. You can then check your Turkish IP address using an IP checker tool.

There are a few ways to get access to blocked websites in Turkey. The most common ways to bypass Turkish censorship are:

VPN software is the most versatile of these choices. A good VPN will be able to tunnel your web traffic outside of Turkey without catching the attention of your ISP or the government.

Alternatively you can connect to the Tor network, a global network of community owned servers or “nodes” which anonymise your activity and relocate it to another country. Tor has been banned in Turkey, so it isn’t as easy to use as it once was. 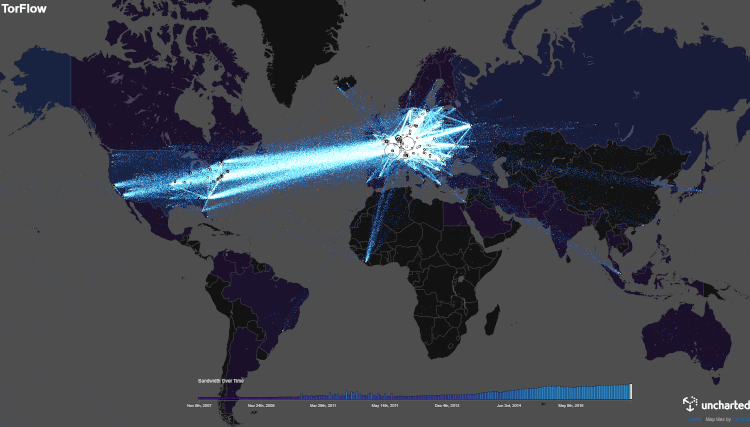 A visualization of Tor’s global data flow, 3 to 6 January 2016 by TorFlow.

Tor comes with its own risks, too. Unless you know what you’re doing, it’s much easier to expose your identity.

The third option is to use a web proxy. A proxy is more rudimentary than a VPN, and won’t protect your activity from surveillance by your ISP using methods like deep packet inspection (DPI).

Using a proxy can be a quick way to spoof your location and access restricted information about staying anonymous online in Turkey. However, it’s much safer to use a more secure tool that actually encrypts your connection.

Which Websites Are Blocked in Turkey?

Under Erdoğan’s leadership, an increasingly large number of websites have been blocked.

To access these sites and services during a government blackout, you’ll need a VPN or another reliable method of circumventing your Turkish ISP’s firewall.

Social media services that are routinely blocked in Turkey include:

Bans have been harsh and unexpected, none more so than Wikipedia, which was banned in April 2017.

The image hosting site Imgur has also been banned in Turkey, following an incident where two men took a district attorney hostage and posted an image of him at gunpoint on the website.

There is very little transparency from the Turkish government, so it is hard to tell when a website might go down and whether or not it will come back online.

The fact that online censorship is implemented so casually demonstrates the need to run a VPN in Turkey, where online resources can be closed off without warning or justification.

LGBT+ content and news have also been a persistent target for censorship, offline and online. In September 2019 TikTok banned all depictions of homosexuality from its platform in Turkey. 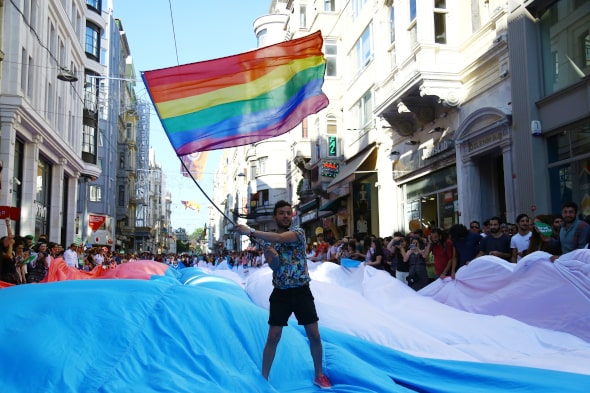 The dating app Grindr was banned in Turkey in 2013.

In July 2019 the Turkish news site Bianet was also banned. This was particularly alarming, as Bianet is one of very few independent news sources operating in Turkey.

It later emerged that the ban was made by accident, and only specific articles were supposed to be blocked. The other 135 independent news sites were not as lucky as Bianet, and remain offline.

Media sites are required to apply for a special licence to broadcast to Turkey. Netflix has applied for this licence and claims it won’t be censoring any content. However, we won’t be surprised if shows containing controversial scenes are re-edited or censored.

A huge number of social media platforms were blocked in Southern Turkey while the Turkish Armed Forces and the Free Syrian Army moved to invade Syria, against the Kurdish PKK and YPG, dubbed “Operation Peace Spring”.

Banning just part of the country is part of the growing technological capabilities of Turkey’s censorship regime.

How We Test the Top VPNs for Turkey

To make sure our recommendations are accurate, we use a scientific rating system to find the best VPNs for Turkey.

We test every VPN in five key areas, each of which are weighted according to their importance. We then combine this data to calculate an overall rating for Turkey.

For Turkey specifically, we test for:

Here’s a more detailed overview of the five categories we test for and how much of the overall Turkey rating they account for:

The ability to safely bypass Turkish website blocks is the most important attribute for a Turkey VPN, which is why it is weighted highest in our ratings.

We test to make sure that every VPN we recommend is capable of functioning safely in Turkey without being identified by authorities.

VPN services that work in Turkey on the majority of their international servers are rewarded, while those that are banned or blocked by ISPs are penalized.

Obfuscation technology is a key feature for any anti-censorship VPN. Obfuscation or ‘camouflage’ protocols disguise your VPN traffic as normal HTTP traffic, which helps it evade detection.

We test every VPN’s encryption and security settings to find out whether it offers traffic obfuscation.

VPNs with AES-256 encryption, no IP leaks, and a range of obfuscation settings are rewarded in the overall rating for Turkey.

Our automated and manual VPN speed tests give an accurate indication of how fast every VPN is on both local and international connections.

We calculate a percentage speed loss rating that reflects the impact each VPN is likely to have on your VPN speeds.

VPNs with an average speed loss of 20% or less perform better in the overall ratings.

Finally, the availability of nearby VPN servers is also tested when rating VPNs for Turkey.

The best VPNs offer reliable servers in Turkey, as well as servers in nearby countries like Greece, Ukraine, Bulgaria, and Romania.

If you connect to a VPN server close to your physical location, you’re much more likely to experience better performance.