You’ll know your VPN is working if it changes your IP address, your traffic is encrypted, and there are no DNS leaks that could expose your identity or activity. You can check this by noting down your IP address before and after connecting to a VPN server, using a VPN leak test, or downloading packet-inspection software. 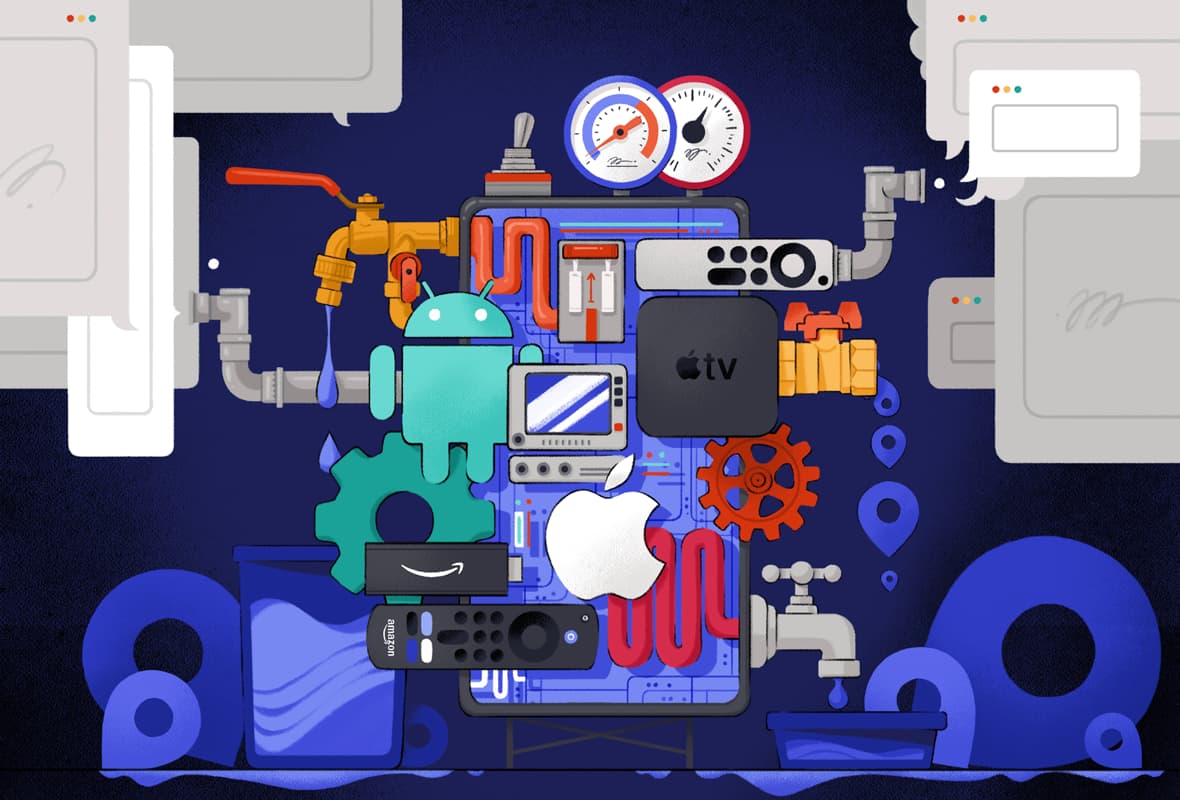 VPN software can be deceptively simple. Often, using a VPN is as easy as downloading an application and selecting a server to connect to. So how do you know if your VPN is actually working correctly?

SUMMARY: How to Check Your VPN Is Working

In this article, we’ll teach you how to check if your VPN is working properly on all popular devices including Android, iOS, Windows, macOS, and Firestick.

You’ll learn how to ensure your VPN is changing your IP address, encrypting your data, and protecting your data from leaks. If you discover that your VPN isn’t working correctly, we’ll also show you how to fix it, too.

EXPERT TIP: If you’re concerned about your VPN not working, the safest option is to choose a more reliable VPN service. We recommend ExpressVPN, which uses AES-256 encryption and has never failed to pass our leak tests in over 5 years of testing.

What Should a VPN Be Doing If It’s Working Properly?

If it’s working correctly, a VPN will hide your IP address and encrypt your communications on the internet. This provides a variety of privacy, security, and entertainment benefits, which you can learn about in our guide to what VPNs are used for.

In addition, the best VPNs should stop your data leaking through DNS and WebRTC leaks.

To summarize, a working VPN will:

These are the basic capabilities of a VPN service. However, the best VPNs go even further to fully protect your privacy.

For example, high-quality VPN services will operate their own custom DNS servers, too. These are designed to handle your DNS requests in place of your ISP’s DNS servers, preventing your ISP from tracking the websites you visit.

If you connect to a VPN and continue to use your ISP’s DNS servers, then your VPN isn’t working properly.

You’ll know your VPN is working if:

You’ll know your VPN is not working if:

How to Check If Your VPN Is Working (3 Methods)

There are three simple steps you can take to confirm that your VPN is working. These methods work for almost every popular device, including Android, iOS, Windows, and macOS.

However, the most important test for you will depend on how you plan to use the VPN.

If you are evading censorship and surveillance, for example, it is vital to check that your VPN is both encrypting your data and changing your IP address. If your main concern is unblocking Netflix, checking the encryption is less important.

The easiest way to see if your VPN works is to check whether it changes your IP address. To do this, test your IP address before and after switching on the VPN and compare the results.

To check your IP address and VPN location, follow these steps:

Our IP address before and after connecting to a VPN server in New York.

This is the easiest way to check your VPN is working on every platform, including Smart TVs and Amazon Firestick devices.

Temporarily changing your IP address is one of the fundamental features of a VPN, but it doesn’t always mean your VPN is working fully. Your DNS requests may still be leaking, for example, or your web traffic might not be encrypted.

Even if your VPN is hiding your IP address, there are other ways that information about you can be exposed. Collectively, these vulnerabilities are known as VPN leaks.

For example, your IP address could leak through WebRTC, or your country and browsing data could be exposed through DNS leaks. If any of this identifying information is revealed, your VPN isn’t doing its job.

The easiest way to test for VPN leaks is to use a dedicated tool. Otherwise, you’ll need to test for each data type manually.

Here’s how to check for IP and DNS leaks: 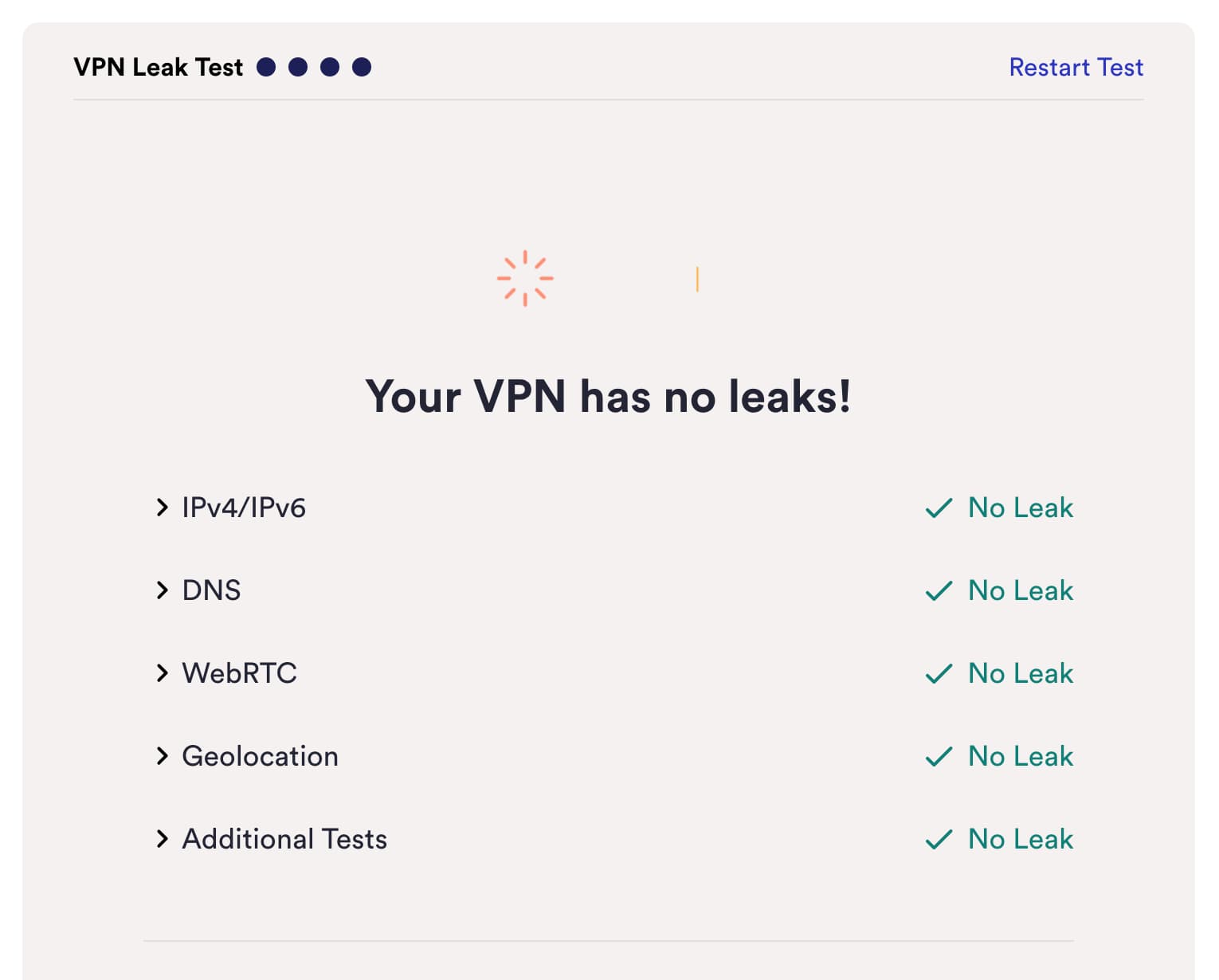 This VPN leak test result shows that our VPN is not leaking any information.

If you conduct this test on your computer and the VPN is confirmed to work properly, you can safely use the VPN on other devices like your phone.

3. Check Your VPN Connection Is Encrypted

A good VPN uses robust encryption between your device and the VPN server, which means that your data is protected even if someone can intercept it.

For most use cases, it’s enough to choose a trustworthy VPN and use it with a reliable VPN protocol and encryption cipher.

If you’re using a VPN to protect sensitive information, or to evade state censorship and surveillance, you can conduct tests to confirm that your encrypted tunnel is working correctly.

Here’s how to check your VPN is encrypting your data: 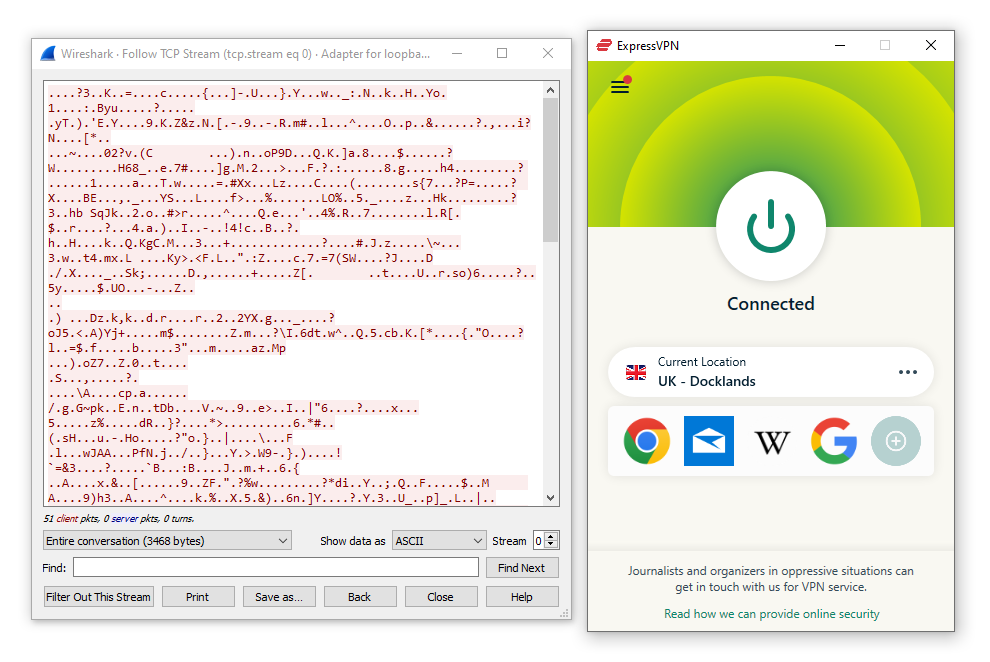 How Do You Know If Your VPN Is Working With Netflix?

Netflix changes the movies and TV shows you can watch depending on the country you’re in. This is called geo-restriction, and it’s used by Netflix to honor its licensing agreements with different production companies.

By spoofing your IP address, you can use a VPN to change your Netflix region and unblock content from other countries.

However, not all VPNs work with Netflix. The streaming service attempts to identify and block VPN traffic, which means only VPNs designed to work with Netflix can bypass its geo-restrictions consistently.

If your VPN isn’t working with Netflix, you won’t be able to watch the movies and TV shows that are available in the country you’ve connected to. You may see an error message, but more often you will only see Netflix Originals and other content for which Netflix has the global rights.

If you’ve checked your VPN and found it’s not working, try connecting to a different server or testing for VPN leaks. Otherwise, read our full explanation of what to do if your VPN is not working with Netflix.

What To Do If Your VPN Isn’t Working Properly

If your VPN isn’t working properly, there are some simple steps you can take to fix it. Often, it might be enough to change your VPN server, or to disable the source of any leaks manually.

However, if your IP address isn’t changing or the VPN’s encryption doesn’t work, you’ll simply need a better VPN.

If your VPN is working but the connection is unreliable, read our advice on why your VPN keeps disconnecting.

Check Your VPN is Turned On

If it seems like your VPN isn’t working, the first thing to do is to make sure it’s switched on:

Windscribe’s connect button has a green outline when the VPN is on.

Check You’re Not Using Too Many Devices Simultaneously

Most VPNs have a cap on how many devices you can use at the same time with one subscription. This is commonly known as a simultaneous connection limit.

Your VPN might fail to connect if you exceed this limit by using the VPN on several different devices at once.

Often, the easiest solution to most VPN issues is simply to connect to a different server.

If your VPN is failing to hide your location, leaking your data, or otherwise failing to connect, try a different VPN server in the same location and check again to see if it works better.

If you’re trying to unblock geographically restricted content, your VPN server will need to be in a country where that content is accessible. If not, you can try a different server anywhere.

VPN protocols are the set of rules that describe how a secure connection is created between your device and the VPN server. Not all VPN protocols are equally secure, and some may be more reliable than others.

If you’re having connection or encryption issues, it’s worth trying a different VPN protocol to see if it fixes the problem.

To do this, go into your VPN settings and choose one of the following VPN protocols:

If you’re suffering from network problems, you can try using OpenVPN with TCP instead of OpenVPN with UDP. OpenVPN TCP has error-checking built in, so it’s more reliable.

In addition, you may have a choice of encryption cipher, which describes how the VPN’s encryption works. The recommended option is Advanced Encryption Standard (AES) with a 256-bit key length.

There are several other VPN settings that may affect whether your VPN is working or not:

There are also settings you can change on your device to help your VPN work properly:

If you’ve tested your VPN for leaks and discovered that it’s not working properly, the right solution will depend on the type of leak you’ve found.

If your real IP address is exposed, your VPN simply isn’t working properly. In this case, you’ll almost certainly need to use a different VPN.

However, if you’ve found DNS or WebRTC leaks, there are several ways to fix these issues manually. You can find full instructions for each method in our explanation of how to fix VPN leaks.

How to Fix Encryption Problems

For most VPN services, encryption problems are highly unusual and a serious concern. If you’ve tested your VPN with Wireshark and found that your connection was not encrypted, then we recommend you try one of our recommended VPN services instead.

If you’re using a free VPN or a VPN browser extension, check to make sure it actually attempts to encrypt your data at all, as some of these services are proxies rather than ‘full’ VPN services.

In your VPN’s settings, make sure you’ve chosen a VPN protocol and encryption cipher in the settings menu.

Ultimately, a personal VPN service should work from its first installation and encrypt your web traffic without requiring you to configure it.

If you experience encryption issues with several different VPNs, seek support from your VPN provider to see if they can help you to resolve the issue.

How Do I Test If My VPN Is Working?

The easiest way to test if your VPN is working is to check your IP address before and after connecting to a VPN server. If your IP address changes, the VPN is working properly. You can also check for data leaks using a VPN leak test, and test your VPN’s encryption using free packet inspection software such as WireShark.

Why Is My VPN Connected But Still Not Working?

If your VPN is connected but your traffic isn’t encrypted and your IP address hasn’t changed, the VPN isn’t working. Check to see if you are using split tunneling, and disable it if so. Make sure you’re not using a ‘trusted networks’ feature either, which turns the VPN off when you’re using a network you’ve told it is safe.

If your VPN still doesn’t work, it may be leaking data or blocked by security software on your device.

Can a Slow Internet Connection Stop My VPN Working?

It’s possible for a slow internet connection to interfere with your VPN. The VPN software on your device sends a message to the VPN server every few seconds to keep the tunnel open. If it doesn’t get a reply in 120 seconds, your VPN will disconnect.

120 seconds is a long time, though, so it would be unusual in most places. Outages in internet infrastructure that cause a delay of this length could make your VPN tunnel close.