The best VPN apps change your IP address and deliver fast, unrestricted access to video content unavailable in your country or region.

Here’s a summary of the best VPNs for streaming in 2022:

Comparison of the Best VPNs for Streaming

Use the table below to compare the fastest and most reliable streaming VPNs based on download speed, access to streaming services, and Smart DNS availability.

All five VPNs have apps for Windows, macOS, iOS, Android, and Fire TV. Other than PrivateVPN, they also include Smart DNS to unblock streaming apps on Apple TV, PlayStation, and Xbox.

Further below you can also see which free streaming VPN we recommend.

When rating streaming VPNs, we prioritize access to US Netflix since it hosts the most TV shows and movies. For unblocking other platforms like Hulu, Amazon Prime Video, and HBO Max, skip to the best VPNs by streaming service section.

Later in this guide, we also advise you on what to do if your streaming VPN is no longer working to bypass geo-blocks.

Unlike many review websites, we’re completely independent and focused on VPN software. We’ve spent thousands of hours testing and reviewing streaming VPNs using our VPN streaming test process to recommend the best ones.

Here are some of our key VPN streaming testing statistics:

The following table compares how the best streaming VPNs perform in each key testing category:

The Best VPNs for Streaming in 2022

Windscribe Free is the best free VPN for streaming. It’s the only safe free VPN to consistently unblock content platforms at good speeds. 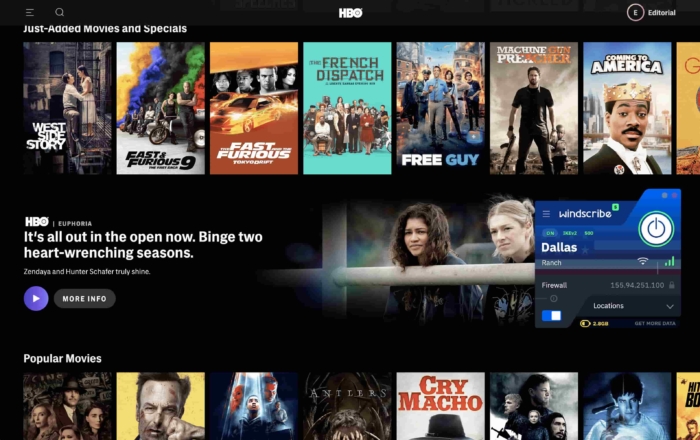 Windscribe Free unblocks all the major US streaming sites except for US Netflix.

Testing Windscribe Free, we verified it can stream 6 Netflix libraries, HBO Max, Hulu, Amazon Prime Video, and even BBC iPlayer. However, it is no longer able to access US Netflix from overseas.

It’s very effective for a free VPN service, but it has a 10GB monthly data cap, which equates to roughly 3 hours of HD streaming per month.

The Best VPNs by Streaming Service

The five VPNs we recommend above are the best VPNs for streaming overall.

However, the right streaming VPN for you depends on the specific content platform you want to unblock from abroad.

This section highlights the best VPNs for individual streaming websites and apps.

The table below summarizes the best VPN for each streaming service. We’ve added more details on each platform below the table.

Here’s a full list of the top VPNs for each major streaming service, along with the results of our streaming tests:

A good VPN for Netflix will bypass the service’s geographic restrictions.

That means you’ll be able to watch movies and TV shows in the US, UK, Japan, France, and dozens of other countries.

Based on our latest tests, ExpressVPN is the best overall VPN for Netflix – especially if you’re outside the United States.

The VPN has excellent international speeds, responsive customer support, and a 30-day money back guarantee.

It also works with 10 international Netflix libraries, including the US.

BBC iPlayer is notoriously difficult to watch for anyone outside of the UK.

NordVPN is currently the top VPN for BBC iPlayer. It’s extremely fast and unblocks BBC iPlayer on all its UK servers.

You’ll be able to watch UK TV in HD without buffering or slow loading times.

Using a VPN with Disney+ gives you access to movies from Marvel, Pixar, Disney, and more.

Most countries have access to Disney+, but if you’re in the US you can connect to a European server and stream Disney+ Star.

Likewise, users outside the US can access the Disney+ bundle package that includes Hulu and ESPN (with an additional fee).

The best VPN for Disney+ is Surfshark. That’s because it works to stream all Disney+ content on absolutely any server.

You’ll need a payment method registered in one of the countries Disney+ has launched. If you don’t have this, follow the workarounds in our Disney+ VPN guide.

Disney+ Hotstar has video content that is split between Disney+, Hulu, ESPN+ and HBO Max in the US. It also has a free version that allows you to stream Bollywood favorites and TV shows, like Koffee with Karan.

ExpressVPN is our favorite VPN for Hotstar. It runs India virtual servers that deliver fast connections speeds into India from abroad.

Amazon Prime Video has an international content library of over 20,000 movies and TV shows.

To access the US Amazon Prime Video library from abroad, simply switch to a US VPN server. You don’t even need to register a US Amazon account.

Based on our tests, ExpressVPN is the best VPN for Amazon Prime Video. It works on every US server and streams movies without any buffering or lag.

The five best VPNs for Amazon Prime Video are:

Hulu is another difficult streaming service to unblock. All of Hulu’s movies and TV shows are strictly blocked for anyone from outside of the US.

To identify the best VPN for Hulu, we tested a number of randomized US servers from all our top-rated streaming VPNs.

We found that ExpressVPN is the best VPN for Hulu. Once connected, it gave us access to shows like Fargo, The Simpsons, and The Handmaid’s Tale, all in HD.

HBO Max is the premium streaming service of HBO. To watch it, you’ll need an American IP address.

Using a VPN with HBO Max gives you access to all the TV shows and movies from HBO, as well as the full WarnerMedia library.

ExpressVPN is the best VPN for HBO Max. It reliably streams HBO Max from other countries, so you can watch Max Originals like Wonder Woman 1984, Friends, and Game of Thrones from outside the US.

Why You Need a VPN for Streaming

Using a VPN can greatly improve your streaming experience. If you’re at home, you can use a VPN to spoof your IP address and access thousands of geo-restricted movies and TV shows that aren’t available in your country.

If you’re travelling, you can use a VPN to access all of the content from home that you miss.

You can even use a VPN to get cheaper prices on your favourite streaming platforms. For example, by changing your location to Turkey, you can get a cheaper Netflix account.

In 2020 we surveyed over 688,000 internet users, and over 40% used a VPN to access streaming websites/apps and watch better video content.

Streaming services like Netflix, HBO Max, and Amazon Prime Video restrict their content to users in specific locations. For example, US Netflix has over 5,500 titles, whereas Spain has just over 3,500.

What’s more, some services like HBO, BBC iPlayer, and Hulu are only available in one country.

That means there’s a huge number of shows available that you can only access with a VPN for streaming.

There’s even more on offer if you’re a fan of sports. If you subscribe to a sports streaming service and don’t want to miss a game from home, simply switch on your streaming VPN and log in.

When you use a VPN, you hide your IP address and mask your location so that streaming websites think you’re browsing from a different country. For example, this lets you watch Netflix content unavailable in your region.

That’s because most services are now extremely effective at identifying and banning IP addresses belonging to VPN servers.

There are still a handful of high-quality VPN services that consistently work to access international streaming libraries with fast speeds and low prices.

Just make sure to connect to a server in the country where the movie or TV show is available to watch.

How to Use a VPN for Streaming

Before you can watch foreign streaming content, you’ll need to set up your VPN software.

If your chosen VPN service comes with custom apps then the installation process is very simple.

To stream movies and TV shows with a VPN:

If you want to watch Netflix, Hulu, HBO Max, or similar streaming platforms then you’ll have to buy a subscription to those services first.

While using a VPN can unlock different international content libraries, it can’t get you free access to each platform.

Video on How to Stream with a VPN

We created the video below to showcase how easy it is to unblock a streaming library in a foreign country with a VPN:

Most streaming services try to stop users from accessing their content with a VPN.

They do this by blocking IP addresses they believe belong to VPN servers. This usually happens when a large number of users try to access the service using the same IP address.

You’ll know when your VPN IP address has been blocked because you’ll see a proxy error message:

These bans come in waves, and it’s often impossible to predict. However, a good streaming VPN will work hard to get around these blocks.

If your streaming VPN isn’t working, try these troubleshooting tips to fix it:

Specifically for Netflix, there are additional workarounds to try if your Netflix VPN isn’t working.

How We Test Streaming VPNs

Our experts use a scientific testing system to rate each VPN for streaming.

For streaming specifically, we test for:

For a more detailed look at the science behind our rating system, here’s an overview of each testing category and what percentage of the overall rating they make up.

Netflix is the most popular streaming service and the reason a lot of people invest in VPNs.

For this reason, a VPN’s ability to access Netflix makes up 20% of its final rating.

Most people want access to US Netflix because it has the largest content library, but we also give additional weight to VPNs that work with Netflix Japan or Netflix Canada.

The more reliable a VPN is for accessing international Netflix libraries, the better its rating.

BBC iPlayer is another popular geo-restricted streaming service that is notoriously hard to access from abroad.

We reward VPNs that have a track record getting around the BBC’s tough blocks. The more reliable the VPN is, the higher it is rated.

As more streaming services enter the marketplace, we reward the VPNs that stay on top of the game and and offer access to a variety of different platforms.

We test every VPN on Amazon Prime, Disney+, Hulu, HBO Max, and DAZN. The more sites the VPN works with, the higher it is rated in this category.

VPN speeds are important to streaming. The faster the VPN is, the less lag and buffering you will experience.

You should be able to stream in Full HD or 4K when using a streaming VPN.

Our experts regularly run both manual and automated speed tests to ensure our speed testing data is up-to-date. We test for both local and long-distance speeds to calculate an overall rating for each VPN’s speed capabilities.

Minimum Requirement: Smart DNS is not a minimum requirement.
We Recommend: The VPN comes with Smart DNS functionality.

Smart DNS allows you to use a VPN’s DNS servers to reroute your web traffic through another country.

This is the easiest way to access region-restricted content on TVs, consoles, and other devices without native VPN applications.

As long as you can install a VPN on a router, you can use it for all of your streaming devices.

However, this process is complicated and not user-friendly. We reward the VPNs that have designed and created VPN apps for specific devices and platforms.

We test the compatibility of each VPN for Fire TV Stick, Apple TV, Xbox, PS5, and more.

Our experts then test these apps to see if they’re user-friendly and useful for watching streaming content.