If your VPN isn’t working with Netflix, the streaming service has banned the IP address of your VPN server. The simplest way to fix this is to use a streaming-optimized VPN. Alternatively, try connecting to another server in the same country or clear your browser cookies and cache. 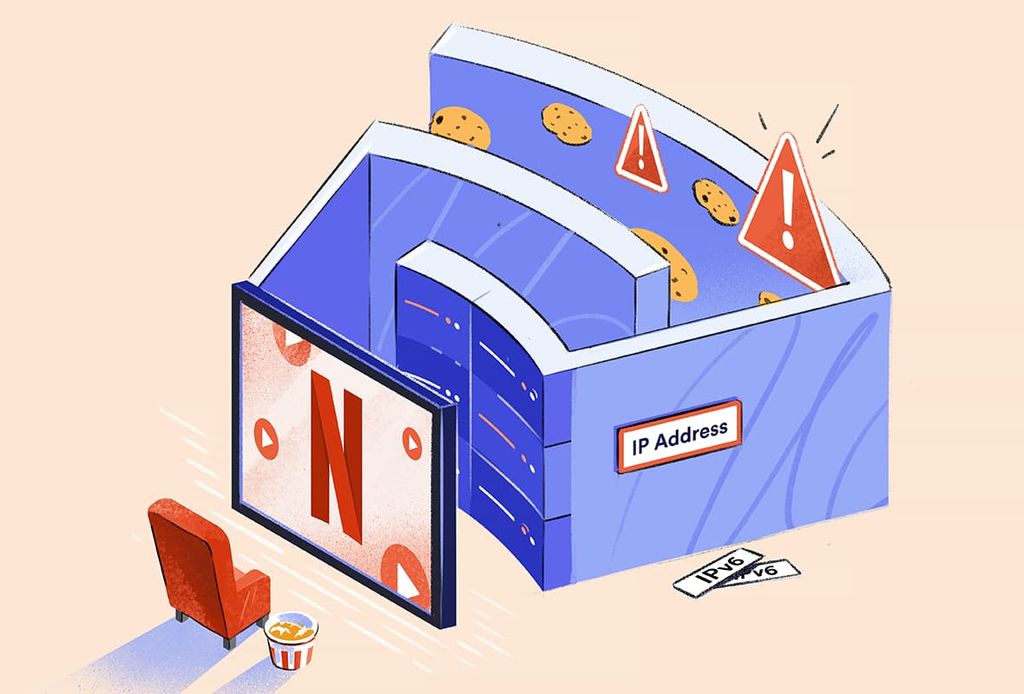 Netflix has a unique content catalog for every country. By using a Virtual Private Network (VPN) to change your IP address, you can stream your desired Netflix library from anywhere in the world.

However, Netflix doesn’t own the distribution rights for content in all regions. Due to these copyright agreements, the streaming service has to enforce geofencing and block VPN services.

If your VPN stops working with Netflix, you’ll only see Netflix originals or the ‘pardon the interruption’ proxy error.

Quick Guide: How to Fix a VPN Not Working with Netflix

SHORT ON TIME? The easiest way to fix a VPN not working with Netflix is to use one that works all the time. ExpressVPN unblocks 10 Netflix regions (including USA), and you can try it risk-free for 30 days.

How to Fix a VPN Not Working with Netflix

We’ve listed below nine simple workarounds to get your VPN working with Netflix.

The most effective way of solving Netflix VPN problems is to use one of the best Netflix VPNs.

This is because most VPNs won’t ever work with Netflix, no matter what workarounds you attempt.

The majority of VPN services lack the necessary technology, prioritize other software features, or don’t have the resources to unblock Netflix.

Our tests confirm that using ExpressVPN with Netflix is the most reliable way to beat the Netflix VPN ban in December 2022.

While ExpressVPN is not cheap, the service works consistently with US Netflix and nine other libraries.

During our ExpressVPN tests we also used the VPN to bypass Hulu’s VPN blocks and stream HBO Max from outside the US when connected to the VPN’s New York server. 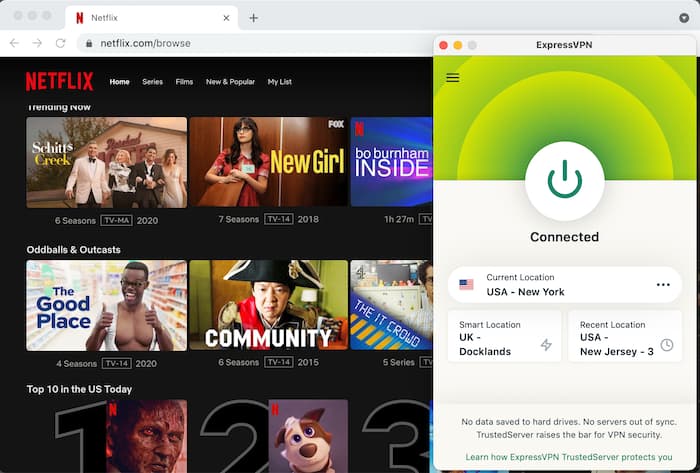 ExpressVPN works reliably with US Netflix.

If you want a free option, Windscribe is currently the best 100% free VPN that unblocks Netflix. However, the VPN’s free plan is limited to just 10GB of data per month.

2. Connect to a Different Server

If you can’t access Netflix using a VPN, it means that Netflix has identified and banned the IP address of the server you’re connected to.

To get a new IP address, simply connect to another server in the same country. There’s a chance that the new server won’t be blocked by Netflix yet.

Alternatively, use the table below. We’ve collected a list of servers from the best VPNs that work with popular Netflix regions.

Just connect to one of these servers to stream the specified Netflix region:

Once connected, refresh your browser on desktop or relaunch your app on mobile.

Netflix can use this information to identify your true location, even when you’re connected to a VPN server in a different country.

Clearing these files will force Netflix to show the library of the server you’re connected to.

How to clear cookies and cache in Google Chrome: 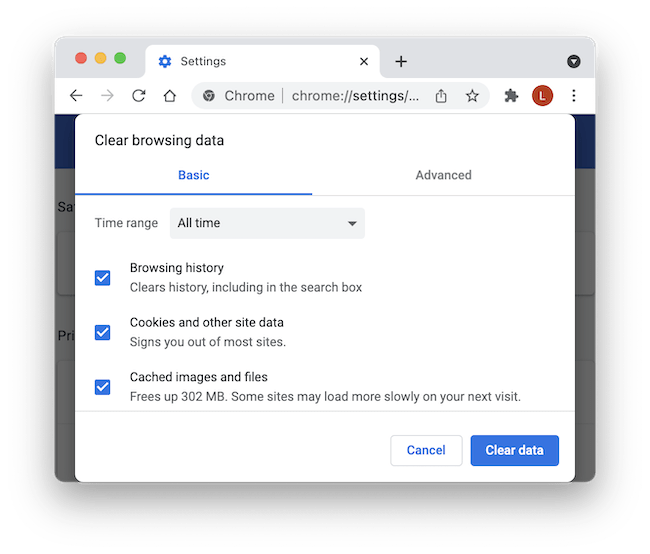 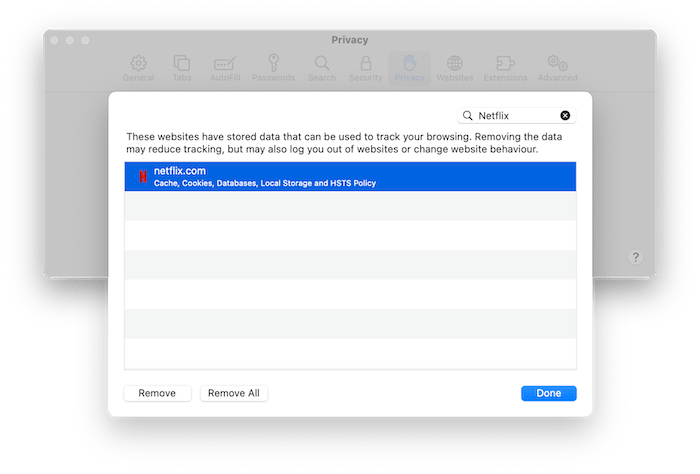 Note: This method only works on desktop. On mobile, you will have to restart your device to clear Netflix’s cache and cookies.

Netflix decides the library to show you based on your IPv6 address, not your IPv4 address (if you have one).

The problem is that many VPNs still don’t support IPv6. If your IPV6 address leaks through the VPN tunnel, Netflix will show your local library.

For example, when testing it with a US server, Betternet was leaking our IPv6 address. This meant that we could only stream TV shows and movies from our local UK Netflix library. 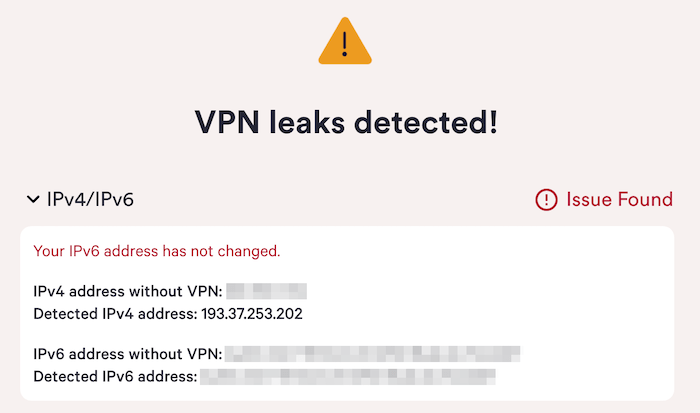 For added assurance, we recommend blocking IPv6 on your device, rather than using your VPN’s built-in settings.

How to disable IPv6 on Windows:

How to disable IPv6 on Mac:

You can check for IPv6 leaks using our VPN leak test tool.

Some VPNs come with Smart DNS functionality. Smart DNS can be used to change Netflix regions without having to connect to a VPN server.

Since the August 2021 Netflix VPN ban, our tests have found that Smart DNS is much more reliable for unblocking Netflix than full VPN services.

Smart DNS routes your internet traffic through a proxy server somewhere else in the world. However, unlike a VPN, it doesn’t encrypt your traffic. Nor does it include other security features.

Normally, we don’t recommend using Smart DNS. However, if you just want to stream a geo-restricted Netflix library and you’re not concerned about privacy, Smart DNS is a fine option.

Here are the VPNs we recommend that offer Smart DNS functionality:

Each VPN has a different method for setting up Smart DNS. Visit your VPN provider’s support page for instructions.

6. Stream Netflix on Your Computer

If Netflix isn’t working for you on devices such as an iPhone, a Fire TV Stick, or a Google Chromecast, try watching the same video on your desktop or laptop computer.

Watching on your computer is more likely to work as desktop VPN apps can route all traffic through its own DNS servers, but mobile VPN apps cannot.

Additionally, make sure your VPN app is configured to use the VPN’s DNS servers. You can enable this in the VPN app’s connection settings. 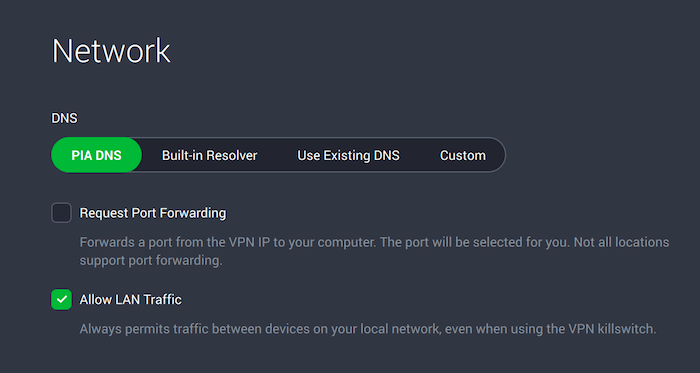 A desktop VPN app can force all traffic through its DNS servers.

As of August 2021, Netflix automatically blocks all non-residential IP addresses. As most VPN servers are located in data centers, it’s easy for Netflix to identify and restrict access from them.

To get around this, some VPNs allow you to pay extra for a residential IP address. Residential IPs make it look like you’re connecting from home on a regular ISP connection. Consequently, there’s no way for Netflix to know you’re connected to a VPN.

Windscribe is the only top Netflix VPN that allows you to get a US residential IP. When using it, we were assigned an AT&T IP address. In our tests, we were able to stream US Netflix 100% of the time when connected to this server.

Though reliable, the downside to this method is its price. Windscribe’s US residential IP option costs $96.00 per year, with no option to pay monthly.

EXPERT ADVICE: Make sure to purchase a residential IP and not a dedicated IP. Though unique to you, a dedicated IP address still belongs to a data center, so Netflix will still detect and block it.

If you can’t stream Netflix with your VPN, try changing the VPN protocol.

Each protocol uses different encryption and tunneling methods. Some are better at bypassing Netflix’s VPN detection methods than others.

You can change VPN protocol in the app’s settings. Try each option until you find one that works. However, we strongly recommend you don’t use PPTP, as it provides weak encryption and has known security vulnerabilities. 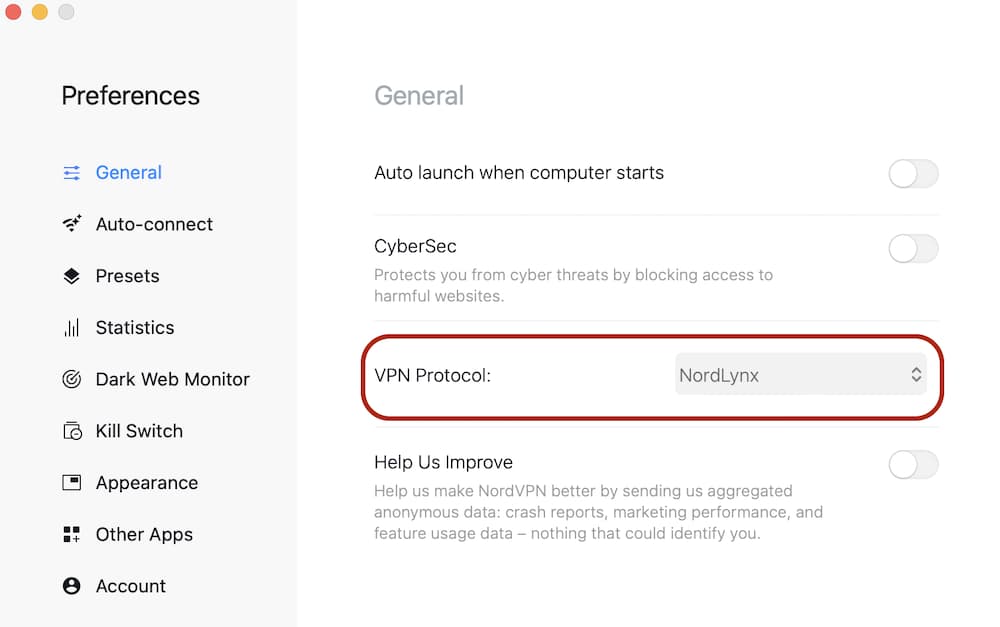 Change your VPN protocol to one optimized for streaming.

By following the above methods, you should get your VPN working with Netflix. However, if you’re still encountering the error message, contact your VPN’s customer support team.

A customer support agent will be able to provide you with a list of up-to-date working servers.

For example, we contacted ExpressVPN’s customer support team when our server was blocked from streaming US Netflix. We were given a list of three compatible servers within 30 seconds of asking. 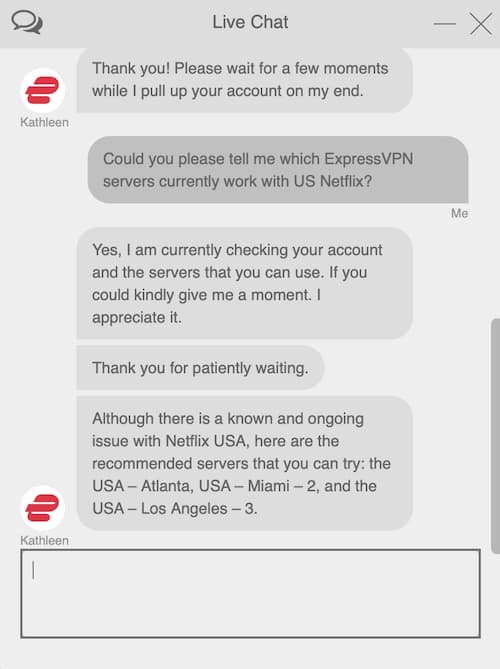 Most top Netflix VPNs also have 24/7 live chat support, so you’ll always be able to get a quick answer to your query.

How to Bypass Netflix Error Codes

When your VPN isn’t working with Netflix, you will encounter a range of error codes or problems with the service.

Here’s how to bypass the most common Netflix error messages: 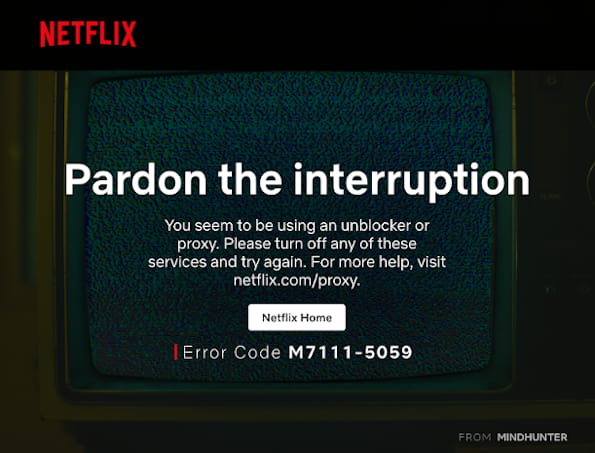 Netflix displays this error message when it detects you are using a VPN. You will be shown this when clicking play on a geo-restricted TV show or movie.

The easiest way to fix the ‘pardon the interruption’ error is to clear your browser cookies and cache files. Then, restart your browser and reopen Netflix.

Netflix Error Code 22004: “This Title Is Not Available to Watch in Your Area”

You’ll see this error code on your iOS device when Netflix detects you are using a VPN to stream a region-locked TV show or movie. For example, we encountered this error when trying to access Power on a blocked UK VPN server.

To fix this, connect to a working VPN server from those we’ve listed above. As well, use uNoGS to ensure the content is available in the country that you’re connected to.

You will see this error code when there is a general problem with your network. If you can access Netflix when disconnected from your VPN, this means there’s a problem with the VPN connection.

To fix this, contact your VPN service’s customer support team. They will let you know if there’s an issue with their server network, or if you’ve configured the VPN incorrectly.

Same as above, you will see the NW-2-5 error code when there is a problem with your network. It does not necessarily mean your VPN has been detected.

To resolve this, contact your VPN provider’s customer support. They can identify problems with your VPN setup, or let you know if the VPN is having connection issues. 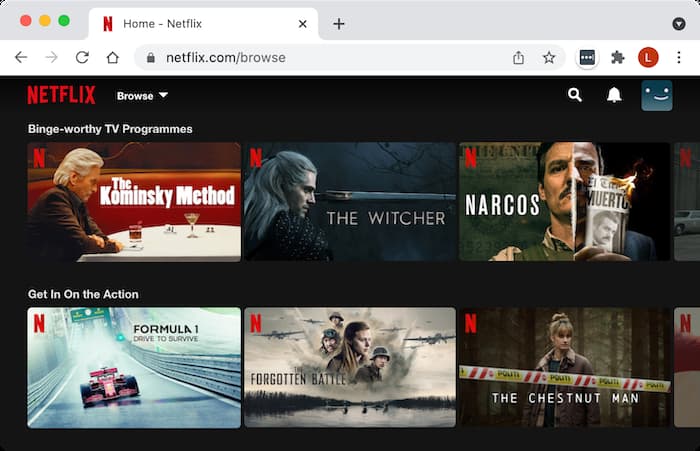 If the Netflix detects you’re using a VPN, it will only display Netflix originals. As Netflix owns the global distribution rights for these titles, there’s no need for it to geo-lock them.

This also applies to licensed content that Netflix has since purchased the global rights for. For example, you can also stream Seinfeld and Monty Python even if Netflix knows you’re using a VPN.

To get around this, change your VPN service. If you’re still having issues, connect to one of the servers that we’ve verified work with Netflix. 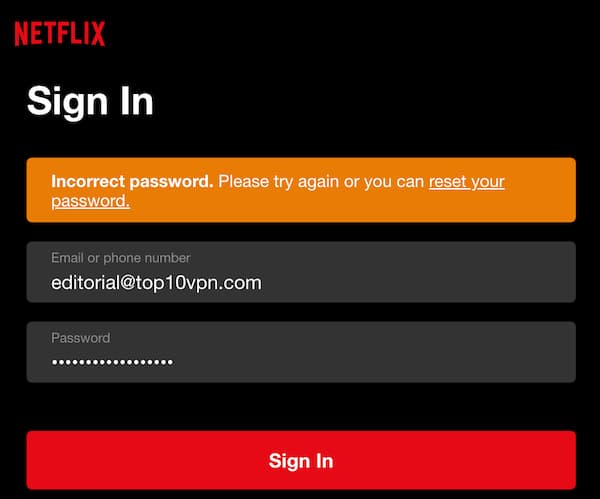 If Netflix has blocked the IP address of your VPN server, it’ll sometimes stop you from signing in. You will be shown an ‘Incorrect password’ error, even when your details are correct.

This error is more common on low-rated VPN services, like X-VPN and Hidester.

Therefore, the best way to fix this is to upgrade your VPN service. If this doesn’t work, try deleting cookies and cache from your browser.

How Does Netflix Block VPNs?

When using a VPN, you share an IP address with other users connected to the same VPN server.

Shared IP addresses are great for privacy and security. They make it much harder for any third party to identify specific users.

However, if over 1,000 people stream Netflix from the same IP address at once, Netflix assumes the IP belongs to a VPN server and blocks it.

This detection method is less effective on desktop traffic since VPN services can hide your true location by routing traffic through their own DNS servers.

However, this detection technique is extremely effective on mobile. The Netflix app can force your device to use its default DNS servers rather than those of the VPN.

This explains why it’s often harder to unblock Netflix on your mobile device than on a web browser.

Put simply, you can only access Netflix if your IP address appears to come from an ISP. If it’s apparent you’re connected to a VPN with a data center IP address, you will be blocked from streaming Netflix.

However, VPN residential IPs are expensive and are not ideal for privacy. This is why most VPNs no longer work with Netflix.

Why Does Netflix Block VPNs?

Netflix blocks VPNs because they allow users to circumvent territorial licensing agreements that the company has in place with content studios.

These licensing agreements allow copyright holders to sell their content in different countries for a larger fee than if distributed globally.

In 2016, Netflix caved to the pressure from large copyright holders and introduced a VPN ban. Since then, it has been blocking access to many VPN and proxy services.