A VPN is the best way to stream HBO Max from outside the US. But not all VPNs work. In this guide we show you how to unblock HBO's US-exclusive streaming service from any country, and which VPN you should use to do it. 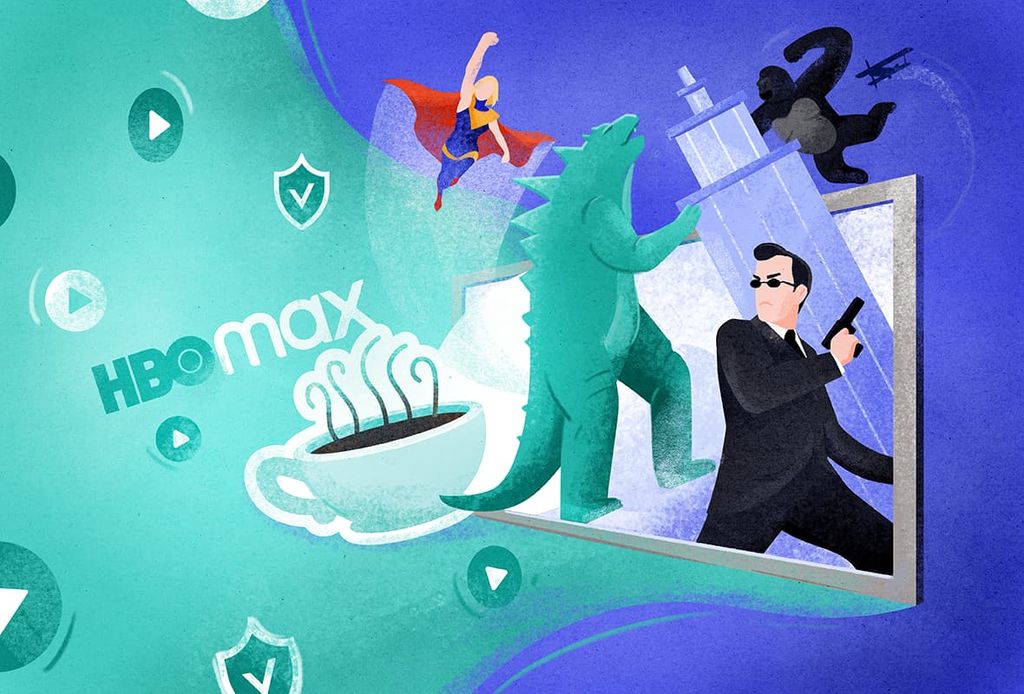 To watch HBO Max, you normally need to be located in the US, Latin America, or the Caribbean.

But with the right VPN for HBO Max, you can get a US IP address and stream HBO movies and TV shows from anywhere in the world, including the UK and Europe.

So how do you use a VPN to bypass HBO Max’s geographic restrictions and access movies like The Suicide Squad, Cry Macho, and The Matrix Resurrections? The process is simple.

Short on time? The best VPN for streaming HBO Max is ExpressVPN, which you can try risk-free for 30 days.

How to Watch HBO Max Outside the US

If you want to stream HBO Max but you’re outside the US, you’ll need two things: a VPN and access to a US-registered payment method.

If you don’t have a US payment method, we’ll walk you through another way to get HBO Max.

Here’s how you can stream HBO Max from wherever you are in the world:

How to Pay for HBO Max Outside the US

Don’t have an American credit card? You can still sign up for a HBO Max account and stream from abroad.

Below are four ways to sign up to HBO Max from abroad:

Method 1: Use a HBO Gift Card

Luckily HBO accepts gift cards, which you can buy from any country, and use to subscribe to HBO Max from outside the US.

Below are the steps to get a HBO gift card and how to use it sign up to HBO Max:

Method 2: Use a Third-Party US Card Service

Another easy way to sign up for HBO Max is to use US card payment services like StatesCard or USUnlocked, which have guides for HBO Max specifically.

For a small fee these payment card services provide US payment details with US addresses.

Method 3: Create a US Apple ID

Getting a US Apple ID and paying for HBO Max isn’t as easy as just changing your region in App Store settings like some websites make out.

You need to start from the bottom up and pay with a US gift card. You also need an Apple computer, like an iMac or MacBook.

If you don’t use Apple devices, you can use an Android to get HBO Max.

What Is the Best VPN for HBO Max?

You need a VPN to watch HBO Max. But which one? Not all VPNs work, especially free ones. We’ve tested 68 VPNs for HBO Max and recommend three services:

You can read how we came to these ratings further down the page.

ExpressVPN is the best VPN for HBO Max. It consistently unblocks HBO on all its US servers, making the process hassle-free. 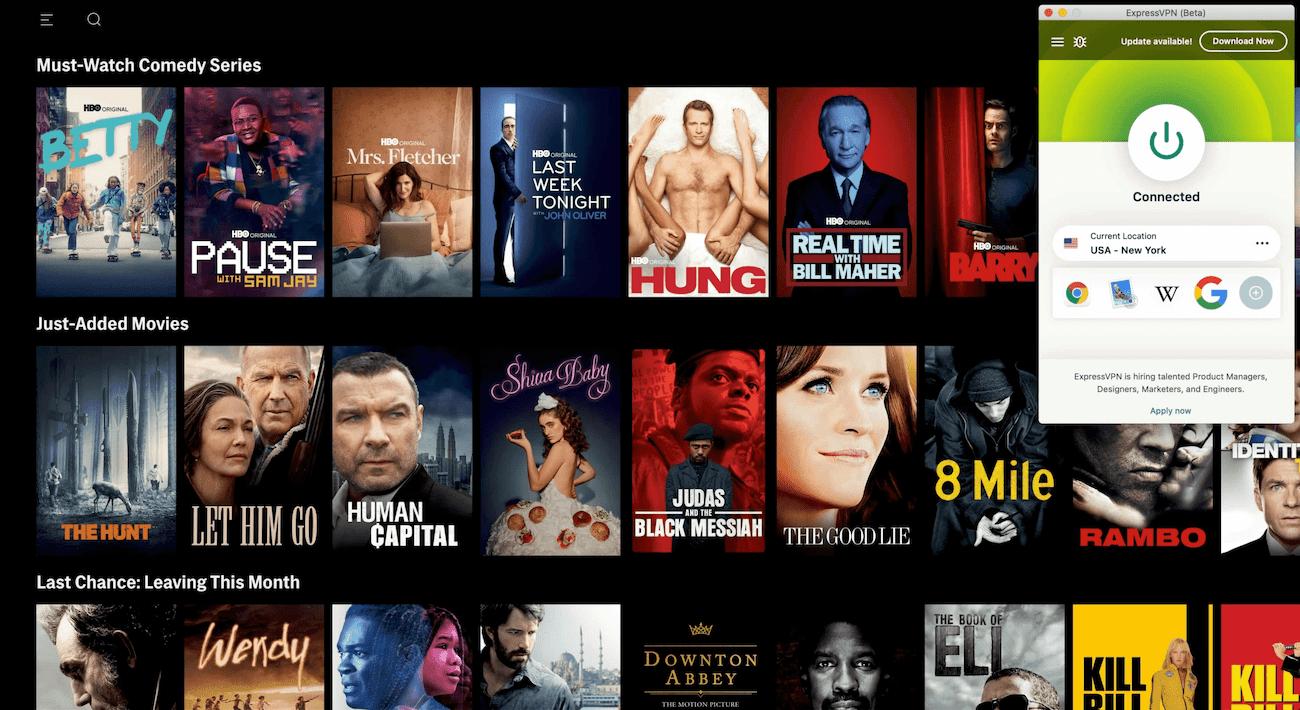 As speeds go, ExpressVPN has outstanding long distance connections to the US.

For example, we recorded a download speed of 84Mbps, which is phenomenal for such a long-distance connection.

These fast international connections mean you’ll have no buffering issues when streaming US content outside America.

Moreover, ExpressVPN has exceptional customer support and the apps are some of the best when it comes to usability and design.

NordVPN falls behind ExpressVPN in all the important HBO Max categories, but only very slightly. We happily recommend it if ExpressVPN is too expensive for you.

NordVPN unblocks HBO Max on almost all its 15 US server locations. However, the easiest way is to use its automatic US server selection. 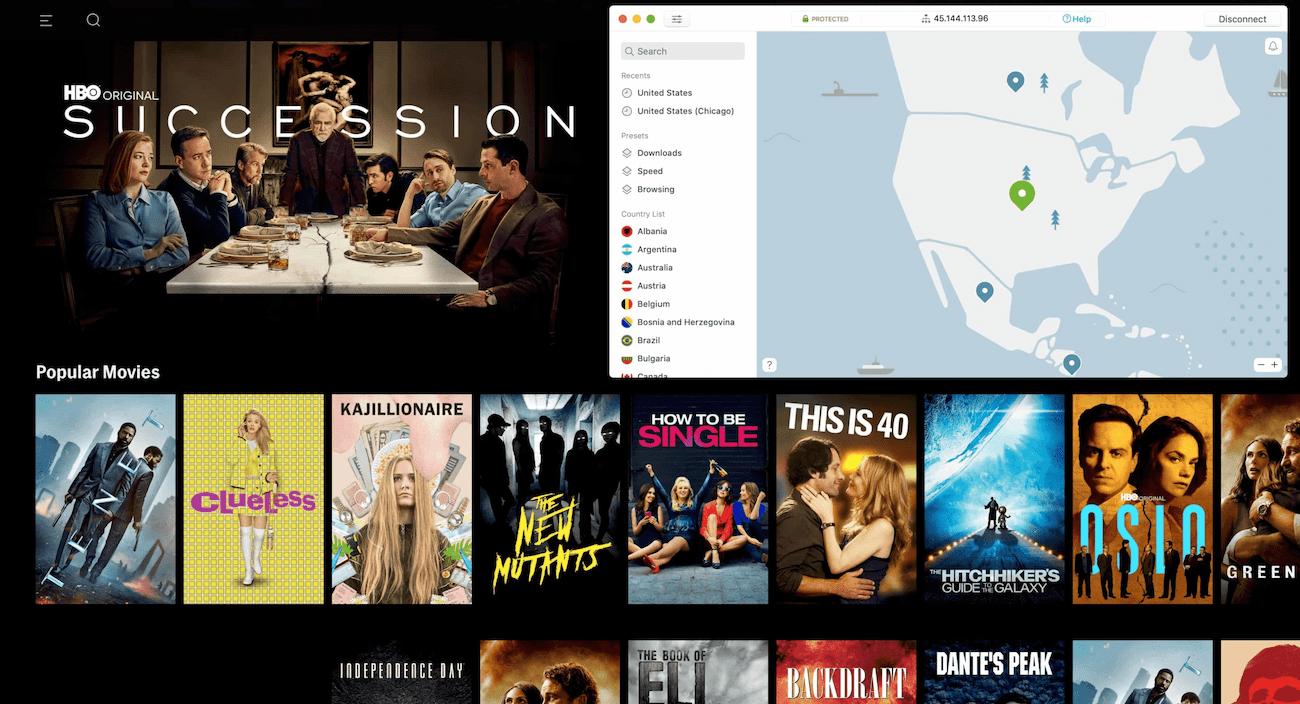 NordVPN edges ExpressVPN in terms of available US server locations, and it’s only a couple of megabits per second behind ExpressVPN’s long-distance speeds, too.

NordVPN is a comfortable second option, but the clincher may be the cheaper price. Compared to ExpressVPN’s $6.67 per month, NordVPN only costs $3.30.

Ultimately, ExpressVPN is better, but you may not want to pay more for marginally better performance.

Get NordVPN or read our detailed NordVPN review.

Surfshark unblocks HBO Max on many of its 20 US server locations, but not all of them. For this reason it’s not as good as ExpressVPN and NordVPN.

Finding a Surfshark VPN server that works is a bit of a guessing game. Thankfully, the default US connection currently works.

To watch HBO Max on Fire TV Stick, Surfshark is the best option. Its Fire TV stick app has advanced features like a kill switch and a split tunneling tool. 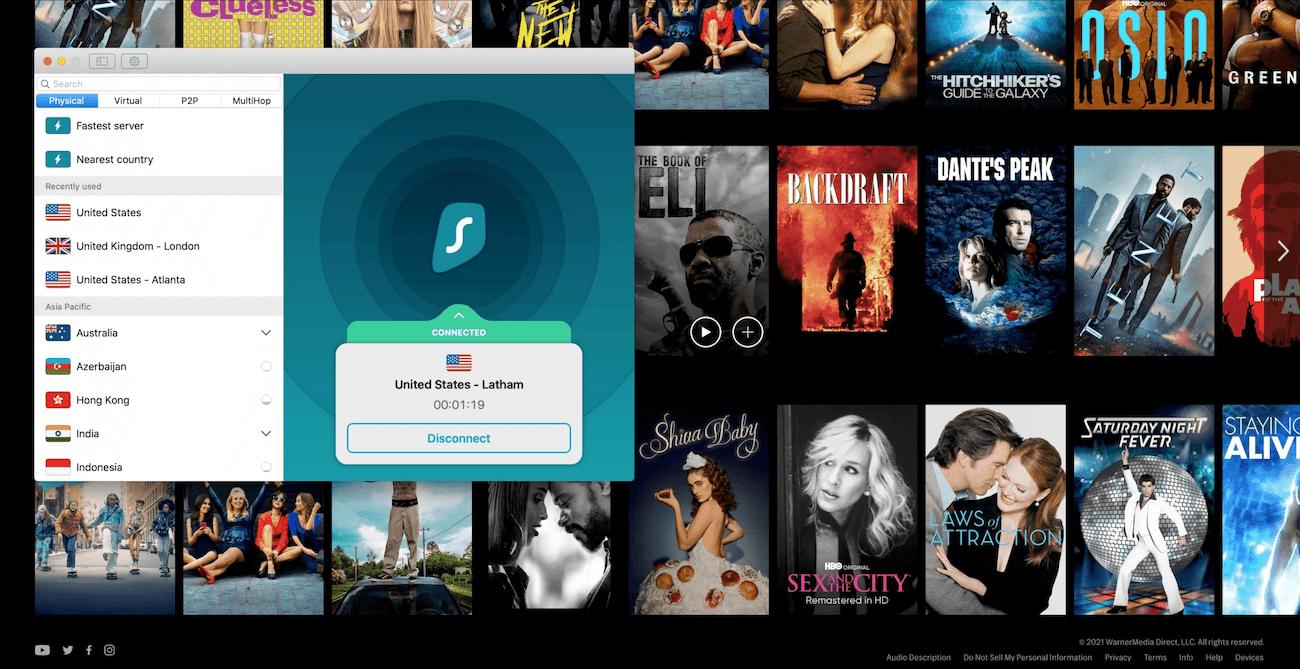 Surfshark isn’t as fast or reliable as ExpressVPN or NordVPN, but it does have the advantage of being the cheapest option.

The VPN service only costs $2.49 per month, with little compromise on quality.

If you still want to know how other VPNs perform with HBO Max, compare them below based on the most relevant categories:

As you can see from the table above, Windscribe and PrivateVPN are also viable options for streaming HBO Max.

However, the considerable long-distance speed loss, and the lack of Smart DNS, prevents us from recommending them.

Testing Methodology: How We Picked the Best VPNs for HBO Max

We tested 68 VPNs to discover which services meet our HBO-specific testing criteria.

The best VPNs for HBO Max access the geo-restricted streaming service quickly, consistently and without issues.

They deliver fast long-distance network speeds to ensure smooth, buffer-free streaming from abroad thanks to large number of streaming-optimized US servers.

A good Fire TV Stick app and Smart TV compatibility is important, too, to watch HBO titles on larger screens.

On a similar note, an effective Smart DNS feature is also ideal to stream content on devices that don’t support VPN applications. These include Apple TV, Roku, Xbox, PlayStation and more.

Moreover, a VPN should be easy to use and come with helpful customer support with knowledge of HBO Max.

The overall HBO Max rating is calculated based on the amount of value we assign to each category.

Below is the percentage of the overall HBO Max rating each category makes up:

What to Do if HBO Max Is Not Working

If you see the error message “Not in Service Area or VPN Detected” or “Sorry, HBO Max isn’t available in your region yet,” it means that HBO knows you’re using a VPN, or your VPN is leaking information about your real location.

You can try a different US VPN server to get around this. HBO Max’s VPN detection methods aren’t as sophisticated as BBC iPlayer or DAZN, so a change of server should fix it.

If that fails, you can clear cache and cookies and chat to the VPNs support to see what workaround can be done.

If the problem persists, it probably means that your VPN isn’t equipped to get around region blocks.

Even good VPNs like CyberGhost and Private Internet Access don’t work with HBO Max. If you want to avoid VPN detections, we recommend that you stick to our recommendations, which have been thoroughly tested.

The error code 03-37-215 occurs for people watching HBO Max on PlayStation. To fix this, simply restart your console.

If the problem persists, delete your device cookies, clear cache, and then restart the console again. That should make it work again. If not, speak to your VPN’s support.

How to Stream HBO Max from Your TV

It also debuts platform-exclusive “Max Originals” and offers a vast library from the archives of Warner Bros., CNN, TBS, Cartoon Network, and TNT.

The best way to watch the latest blockbuster like Mortal Kombat, Dune, or The Suicide Squad is via your home cinema setup.

You can do this by installing HBO Max’s app onto your Smart TV, Amazon Fire TV Stick, Apple TV, Xbox Series X|S, PlayStation 5, or Roku device. If you’re in the US can do this simply and as normal.

If you’re outside the US, you’ll need a VPN that also has a Fire TV Stick app or Smart DNS feature.

At the least, your VPN should be compatible with routers. But this process is more complicated than installing a bespoke app.

The VPNs we recommend all come with good Fire TV Stick apps and Smart DNS features.

How to Stream HBO Max on Amazon Fire TV Stick

If you’re in the US, installing HBO Max on a Fire TV Stick is no different to any other application.

However, to install HBO Max on your Amazon Fire TV Stick anywhere else in the world, it’s not as simple as changing your IP address; you also need to register a US Amazon account.

Even with your VPN on, if your Fire TV Stick is linked to an Amazon account registered in the UK, for example, the US-exclusive HBO Max app won’t appear in your Amazon App Store searches.

To fix this, simply create an Amazon profile with a US address:

Once this is done and linked to your Fire TV Stick, you can find the HBO Max app in the app store search bar.

And switching between US and UK Amazon accounts on your Fire TV Stick isn’t an easy or instant process.

To put it simply: forget about HBO Go and HBO Now. These are just old names for HBO Max and do not really exist anymore.

HBO Go was a streaming service for those with an HBO cable TV subscription. This hasn’t existed since August 2020.

HBO Now was launched in 2015 as a standalone video on demand service for those who didn’t have a cable subscription. It was designed to compete with Netflix, Hulu, and other cordless streaming services. Support for HBO Now ended in December 2020.

Can I Use a Free VPN to Unblock HBO Max?

Many free VPNs are unsafe and the ones we’ve verified as safe are limited due to data caps, server restrictions, or streaming blocks.

However, there is one worthwhile free service: Windscribe Free works with HBO Max.

Windscribe is safe and easy to use, but you are only allowed 10GB of data per month. Therefore, you’ll be very limited in how much you can stream.

Most other safe free VPNs don’t work with HBO Max. Hide.me Free for example, comes with two free US servers, but neither could get around the HBO Max region blocks.

Where is HBO Max Available?

HBO Max is only available in the United States, Latin America, and the Caribbean. You can only get access to HBO Max outside of these regions if you use a VPN.

Many more countries are scheduled to get HBO Max throughout 2021, including Eastern European and Scandinavian countries.

Western European countries like the UK, France, and Germany don’t have a HBO Max release date scheduled. If you are in one of these countries you need to use a VPN for the foreseeable future.

Some countries that can access HBO Max right now include:

Does HBO Max Have a Free Trial?

No, HBO Max doesn’t have a free trial.

It used to have a seven-day trial. But this was before it started debuting movies the same day as the cinema release; it stopped just before Wonder Woman 1984 debuted on the platform.

However, Hulu users in the US can get a one week HBO Max free trial. For Hulu users, do this:

This is a neat workaround for US Hulu users but you should also bear in mind that this trial restricts same-day Warner Bros. releases.

In other words, you won’t be able to watch the films getting released in cinemas at the same time unless you pay for it.