NordVPN works well with Netflix. It's less reliable than before, but it still unblocks US Netflix and 10 other regions. Streaming speeds are fast on a range of devices, including Firestick and Smart TVs. Overall, we recommend using NordVPN for Netflix. 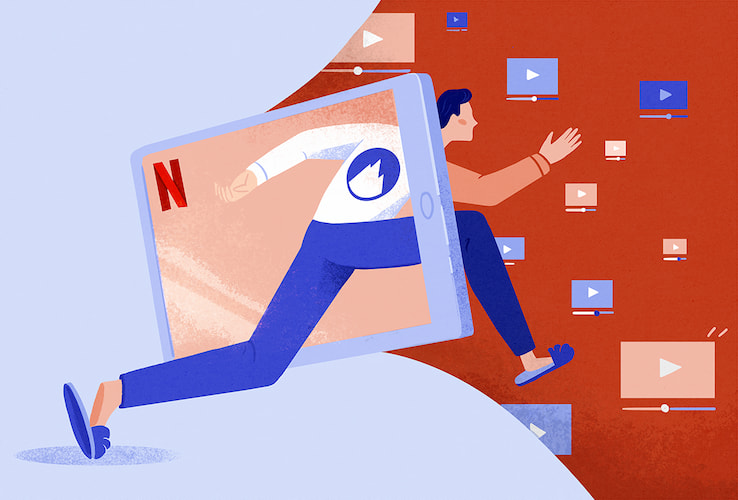 Latest Update: Try our workarounds if NordVPN isn’t working with Netflix for you.

If none work, then try ExpressVPN risk-free for 30 days. It’s the best VPN for unblocking Netflix USA, UK, and Australia.

Netflix’s libraries differ based on your geographical location. If you access the streaming service from the US, you’ll get the American library. In the UK, you’ll see Netflix UK.

The solution to bypass geo-blocks is to use a VPN. Top VPNs spoof your geolocation and unblock Netflix content from another country.

Since Netflix started blocking VPN traffic in 2016, it has become increasingly difficult to find VPNs that reliably work with Netflix.

We regularly test 56 VPNs with international Netflix libraries. Only a handful consistently work, and one of these services is NordVPN.

Based on our most recent streaming tests, NordVPN works with 11 Netflix regions including the US, UK, Canada, and Australia.

In this guide, we’ll detail our streaming test results and explain how good a VPN for Netflix NordVPN really is.

We’ll also walk you through how to set up NordVPN to watch Netflix, and provide troubleshooting tips if NordVPN isn’t unblocking Netflix.

NordVPN Not Working with Netflix?

NordVPN is one of the few VPNs to unblock several Netflix regions. However, the streaming platform is always finding new ways to block VPN traffic.

Netflix’s streaming blocks are becoming so effective that they can affect NordVPN’s excellent content unblocking capabilities.

We’ve listed below simple workarounds to help you if your VPN isn’t working with Netflix. They’ll help you bypass the m7111-5059 Netflix proxy error and stream geo-blocked content.

“Oops, something went wrong… Streaming Error. You seem to be using an unblocker or proxy. Please turn off any of these services and try again.”

1. Connect to a Different Server

Netflix identifies IP addresses that belong to VPN servers and blacklists them. NordVPN overcomes this by operating a huge server network that is extremely difficult to block in its entirety.

However, individual servers can still make their way onto the blacklist, though. If the server you’re using has been blocked, try disconnecting from the VPN and then re-connecting to a different server.

Because you’ll be assigned a new IP address, this should solve the problem. However, you might have to try it a few times to find a server that works.

Thankfully, NordVPN’s server network is so large that you won’t even have to change location to do this. The service offers multiple VPN servers in each country.

See the list of some of NordVPN’s servers that we’ve verified to beat the geo-blockers.

EXPERT ADVICE: Connect to NordVPN servers which have the largest number next to them. These are the latest servers, therefore, they have the least chance of being blocked by Netflix.

Another useful tactic is to make sure you’re using NordVPN’s DNS Servers. To do this:

If all else fails, contact the NordVPN Customer Support Team.

NordVPN’s live chat service is one of the best we’ve tested. It’s available 24/7 and the agents are often helpful and prompt in their replies.

4. Use a VPN that relibaly unblocks Netflix

Since the August 2021 Netflix VPN ban, most VPNs no longer work with Netflix. Even NordVPN stops working from time to time.

If our other troubleshooting steps don’t work, you’ll have to get another VPN that streams Netflix.

Our latest tests have found that ExpressVPN is currently the only VPN that can always stream US Netflix. It also unblocks the UK and Canada libraries.

Is NordVPN Good for Netflix?

NordVPN works reliably with US Netflix.

NordVPN is one of the best VPNs we’ve reviewed, particularly for streaming Netflix.

It also includes a feature called CyberSec, which blocks websites known to host ads, phishing scams and protects you from DDoS attacks.

We regularly review NordVPN, using our bespoke VPN testing methodology, and can confirm it’s still one of the best Netflix VPNs.

Here’s a summary of NordVPN’s streaming strengths and weaknesses:

In the section below, we’ll take a closer look at the features that make NordVPN good and bad for streaming Netflix.

Skip to the next section to learn how to use NordVPN with Netflix. Or, check out this list of NordVPN servers that work with Netflix.

We tested NordVPN in every Netflix region around the world and found that it unblocks content libraries in 11 countries, including:

This is much higher than average. NordVPN unblocks 9 more Netflix libraries than PIA and CyberGhost.

While some other VPNs can access more libraries than NordVPN, the VPN service streams all the biggest and most important regions.

This means that – because NordVPN works to watch Netflix Japan, US, and UK – there aren’t many big movies and TV shows you can’t access with NordVPN.

Stream US Netflix on Local Servers

One excellent benefit of using NordVPN with Netflix is that it lets you unblock American Netflix from anywhere in the world.

Connect to a VPN server located outside of the countries listed above, and you’ll access the US library when you log into Netflix.

This is a huge bonus for users who don’t live near the US, because you can browse the largest content catalog without suffering slower speeds.

Generally, the closer you are to the VPN server, the faster your speeds will be. With this unique feature, NordVPN lets you enjoy local connection speeds while streaming US exclusive videos.

This sets NordVPN apart from many rival streaming VPNs, but the company is tight-lipped on how it works. All we know is NordVPN’s SmartPlay feature is responsible.

SmartPlay is a hybrid of VPN and Smart DNS technologies, that is automatically built into the NordVPN service.

Similar to a VPN, a Smart DNS tricks websites into thinking your physical location is elsewhere to hide your true location and unblock region-restricted content.

To do this, a Smart DNS tool changes the DNS server your traffic is routed through.

Usually, the main drawbacks of Smart DNS tools are that they don’t encrypt web traffic, and can require some technical know-how to set up.

However, by combining Smart DNS with VPN software, and integrating it automatically, NordVPN’s SmartPlay feature appears to avoid these drawbacks.

Beating Netflix’s blockers is impressive, but a VPN service also needs to have good enough connection speeds to stream effectively.

With poor connection speeds, you’ll be forced to watch low-quality video and endure a lot of buffering.

NordVPN is one of the fastest VPN services we’ve ever tested.

Every VPN slows down your internet speed to some degree, but the speed loss is barely noticeable when using NordVPN.

When connecting from the UK to servers in the US, we experienced an average speed loss of just 21% – where our normal download speed of 94Mbps dropped to 74Mbps after connecting to a server in New York.

These are impressive speeds for a long-distance VPN connection, and our tests show that NordVPN consistently performs well on other international connections:

These speeds make NordVPN an excellent choice for Netflix. Even with a modest home connection, you should be able to stream buffer-free and in Ultra HD.

EXPERT ADVICE: For the fastest speeds, use the NordLynx protocol and connect to a VPN server as close to your physical location as possible.

NordVPN has one of the largest server networks on the market. It runs 5,613 VPN servers spread across 59 countries.

Larger server networks are much harder for Netflix to completely ban.

Some of NordVPN’s servers also use obfuscation technology. Often, services like Netflix can see that traffic has been encrypted, and deduce it’s VPN traffic.

To use obfuscation, select Obfuscated under Specialty Servers and choose your desired location from there. 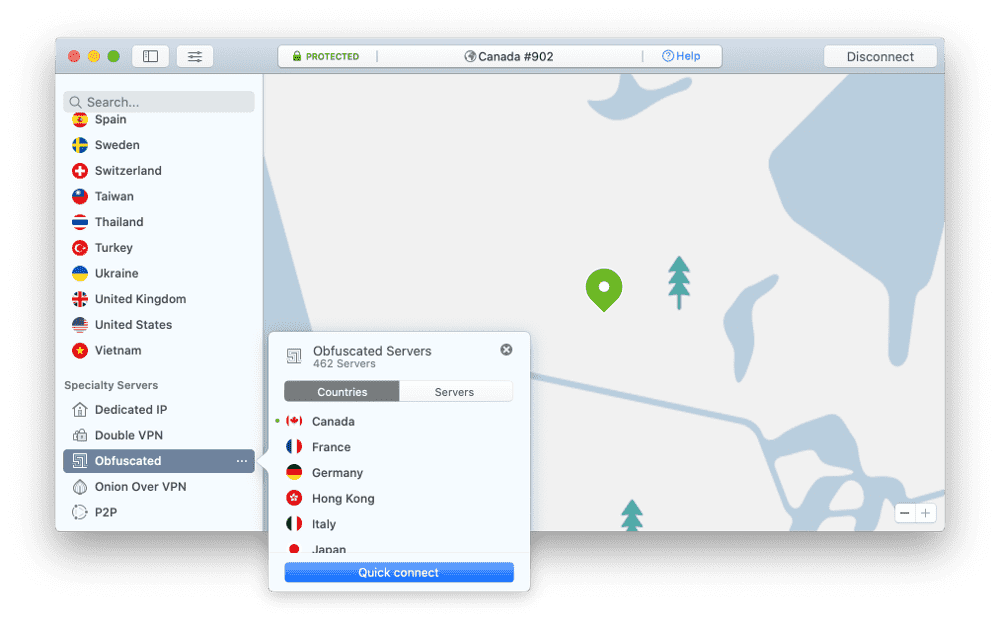 Here is a list of NordVPN servers we recently tested that work with the specified Netflix region:

How to Watch Netflix with NordVPN

To use NordVPN to watch Netflix:

Alternatively, see the video tutorial below. You can watch step-by-step how we used NordVPN to stream US Netflix. 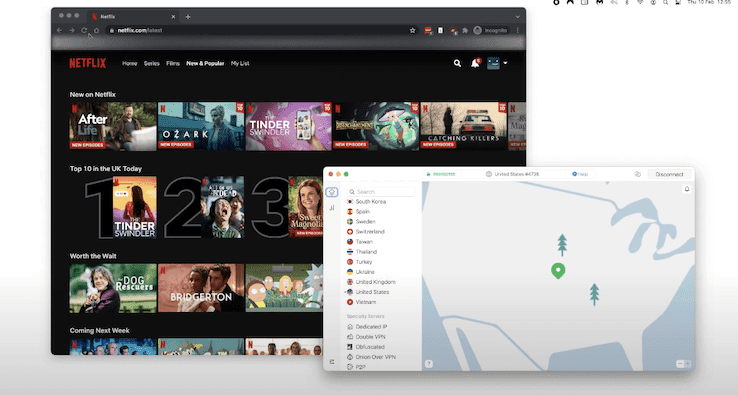 Your Netflix subscription works in every country. Use your existing account to freely watch content typically unavailable in your location.

If you encounter problems, such as the Netflix proxy error, see our simple workarounds earlier in this article.