BBC iPlayer is only available in the UK. The best VPNs for BBC iPlayer assign you a UK IP address, letting you watch the BBC’s video content from outside the UK.

Sadly, some of the best streaming VPNs don’t work with BBC iPlayer. That’s because the BBC uses advanced technology to detect and block VPN traffic.

Based on our unblocking tests, the best VPNs to watch BBC iPlayer outside the UK are:

Comparison of the Best VPNs for BBC iPlayer

Use the table below to compare the top BBC iPlayer VPNs based on VPN speeds into the UK, UK server coverage, and streaming-specific features.

Later in this guide, we’ll also explain how to watch BBC iPlayer with a VPN from countries like the USA, Canada, and Germany.

Furthermore, if you’re having trouble unblocking BBC iPlayer from abroad, we’ll show you how to fix your VPN not working.

The table below shows how the best BBC iPlayer VPNs performed in five key testing categories:

Here are some of the key BBC iPlayer VPN test statistics:

We tested and reviewed 56 to determine if they can unblock BBC iPlayer and if so, how well.

The reality is that many VPNs, including very popular ones, either don’t work with the BBC’s streaming platform, or they’re too unreliable.

Overall Ranking: #18 out of 56 VPNs Reviewed

What we don’t like: Mullvad is one of the most secure VPNs you’ll find. But, it’s not capable of unblocking streaming services, including BBC iPlayer.

Overall Ranking: #29 out of 56 VPNs Reviewed

What we don’t like: TunnelBear is not the quickest VPN, and more importantly hasn’t been able to access BBC iPlayer from several years.

Overall Ranking: #32 out of 56 VPNs Reviewed

What we don’t like: Avast SecureLine is slow connecting into the UK, and hasn’t worked with BBC iPlayer since we started testing its VPN applications.

Overall Ranking: #45 out of 56 VPNs Reviewed

What we don’t like: Turbo Free VPN is unable to bypass the BBC’s streaming geo-restrictions. Also, the VPN has simply too many annoying ads, and it leaks your real DNS details.

Overall Ranking: #54 out of 56 VPNs Reviewed

What we don’t like: Hola VPN is a dangerous free VPN that stores all your internet activity. It’s also very slow and can’t unblock BBC iPlayer.

How We Test VPNs for BBC iPlayer

In this section, we’ll detail our exact testing process to select the best VPNs for BBC iPlayer.

For BBC iPlayer specifically, we test:

Below is the complete list of factors we test to recommend VPNs for BBC iPlayer, along with how much of our overall rating they make up:

The ability to reliably and consistently unblock BBC iPlayer is of course the most important factor, so it makes up the majority of our rating.

We regularly test every VPN service on multiple devices and test access to BBC iPlayer ourselves.

We use this first-hand testing to record the number of times a VPN can unblock BBC iPlayer in a given period, and on how many servers.

The most effective VPNs will work on the majority of UK servers, and will also unblock other streaming services like Netflix.

Connection speeds are especially important for streaming because it is a high-bandwidth activity.

To stream in HD without buffering, you’ll need unlimited bandwidth and as little speed loss as possible.

We routinely test every VPN’s average download speed when connected to UK servers from Asia, Australia, Europe, and North America.

This gives us accurate data that reflects the speeds you’ll experience streaming BBC iPlayer from abroad with a VPN.

The fewer UK VPN servers there are, the more congested the network will be, resulting in slower speeds.

A large number of servers also means more IP addresses, making it much harder for the BBC to detect and block your VPN.

Minimum Requirement: Native applications for Android, iOS, Windows, and macOS.
We Recommend: Native apps for the above devices, as well as a Firestick app, browser extensions, and Smart DNS.

Device compatibility is also a key part of our rating. A VPN with many native applications lets you stream BBC iPlayer on most devices.

We use email and live-chat to test the quality of assistance on offer from every VPN provider.

This is to make sure you’ll be able to get the technical help you need if your VPN stops working with BBC iPlayer.

Live chat or responsive email support are both rewarded, while slow and ineffective customer support are rated lower.

Though they are not always part of our overall rating, there are certain indicators of quality that we factor into every VPN recommendation.

We expect every VPN to provide basic levels of security including AES-256 encryption, IP and DNS leak protection, and the OpenVPN protocol.

It’s also important that every service is simple to use for beginners and experts.

We analyze every VPN application in-depth to make sure it has a user-friendly interface and settings.

We reward customization and configuration options, as long as they come in an easily-understood format.

Finally we consider the price of the service. We give higher ratings to VPNs offering valuable features for a below-average price.

How to Watch BBC iPlayer with a VPN

Wherever you are in the world, you can use a VPN to get a UK IP address and watch restricted TV only available in the UK.

First, make sure to choose a VPN with servers in the UK. All the VPNs listed above have servers in London and elsewhere.

To stream BBC iPlayer with a VPN:

Following the above steps, you’ll be able to watch BBC iPlayer from outside the United Kingdom.

If you still see a BBC iPlayer error message, read the workarounds below to fix the issue.

Video: How to Unblock BBC iPlayer with a VPN

Watch the video below to see how easily we unblocked BBC iPlayer (as well as as US Netflix and Hulu) using NordVPN:

How to Fix Your VPN Not Working with BBC iPlayer

Sometimes even the most reliable VPNs stop working with BBC iPlayer. The situation can change from day to day as the BBC’s blocks become more aggressive.

VPN services describe it as a “cat and mouse game” because the BBC blocks VPN IP addresses almost as fast as the VPN service releases new ones.

If this happens, you may see a BBC iPlayer error message saying something like this:

“BBC iPlayer only works in the UK. Sorry, it’s due to rights issues.”

The best solution is to try a different VPN server. If this doesn’t work, you’ll need a workaround.

If your VPN isn’t working with BBC iPlayer, here’s how to fix it:

If your VPN still isn’t working with BBC iPlayer after following these tips, get in touch with your VPN service’s customer support. Otherwise, you may need to choose a new VPN service.

Internet users connecting within the UK run into issues a lot more frequently than those connecting from outside the country.

If you’re in the UK, you can use split tunneling to route iPlayer traffic outside the VPN. All other web traffic will keep using the VPN connection.

Why Do I Need a VPN for BBC iPlayer?

These content platforms do this to enforce licensing agreements they have with content owners. The extent of the restrictions varies across streaming services.

Netflix, for instance, has a different content library in every country. Other platforms, like Hulu and BBC iPlayer, are only available in one country.

BBC iPlayer is only available within the UK. If you try to connect from elsewhere, you’ll be unable to stream content. By using a VPN, your true IP address is replaced with the IP address of a VPN server.

If you connect to a UK VPN server, you can make BBC iPlayer think you’re located in the UK which will allow you to stream BBC iPlayer from anywhere in the world.

Currently, BBC iPlayer is one of the hardest content platforms to unblock. The service makes a dedicated effort to monitor and block VPN traffic.

As a result, even some of the top-rated VPNs don’t work with BBC iPlayer. Therefore, it’s crucial you use a VPN we’ve verified to work.

How Does BBC iPlayer Detect and Block VPN Services?

The BBC is very strict when it comes to enforcing geo-restrictions.

The BBC also runs checks on whether an IP address is ‘residential’ or belongs to a data center (VPN services mostly use data center IP addresses).

The BBC’s VPN ban makes it very hard to find a VPN that consistently works with BBC iPlayer. It’s also why even the best choices sometimes have a few UK servers that don’t work.

The top VPNs constantly update their UK IP addresses to maintain access to the streaming service.

While no VPN can guarantee to stream BBC iPlayer 100% of the time, the five VPN services we’ve picked are by far the most reliable.

Free services simply don’t have the resources to refresh their UK IP address pool, and keep finding new ways to obfuscate their traffic.

Not to mention that the free VPNs that do work are often slow and unreliable.

Also, most free VPNs are limited at best, and dangerous at worst. Learn more about these risks in our article on the best free VPNs.

Having said that, our tests indicate Windscribe is the only safe free VPN to consistently stream BBC iPlayer.

The VPN is fast, safe, and has servers across the UK. You can use Windscribe to watch BBC iPlayer abroad completely free. 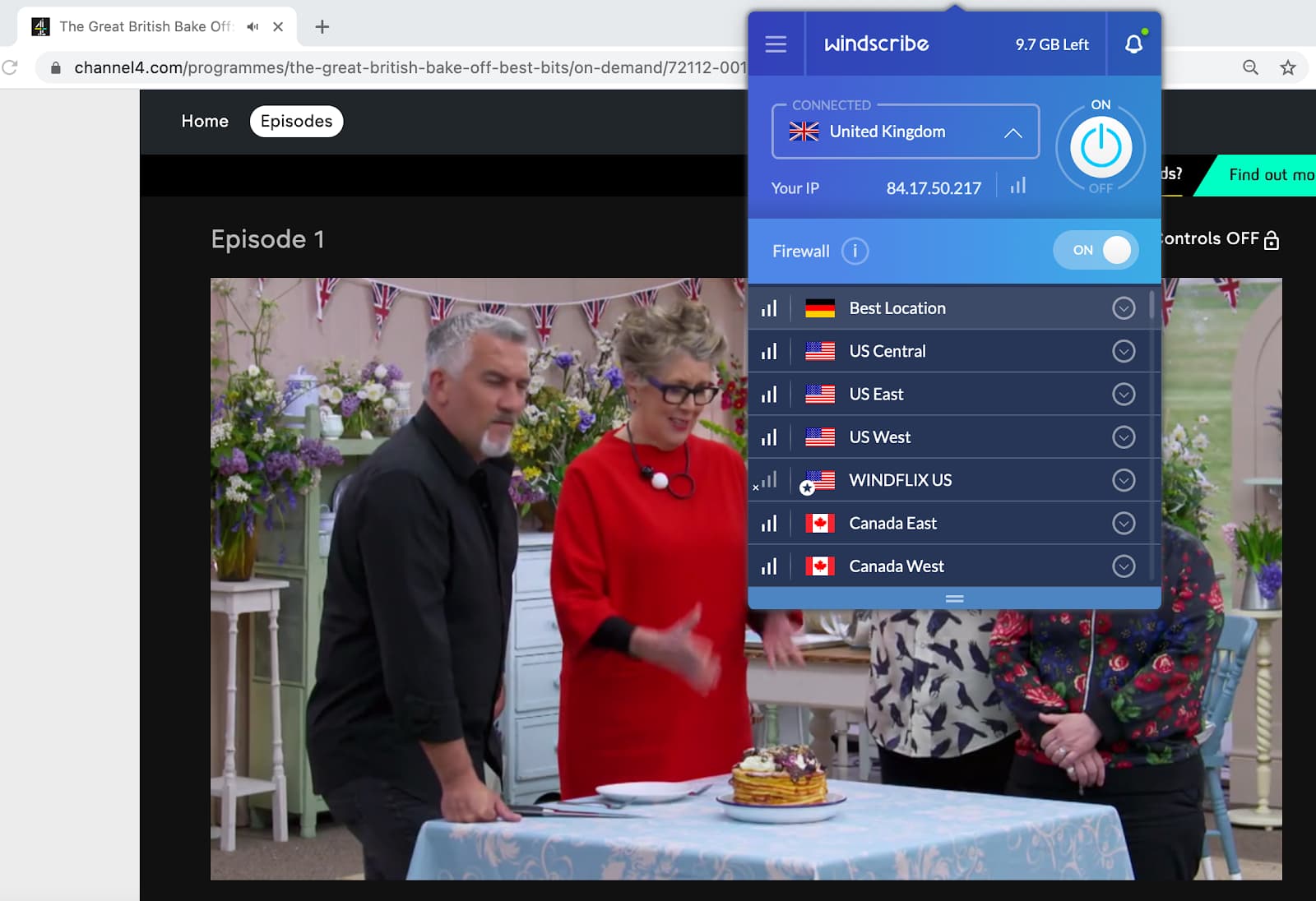 The free version of Windscribe unblocks BBC iPlayer from abroad.

However, there is a monthly data allowance of just 10GB. Unless you’re happy streaming for only a few hours each month, you’ll need to upgrade to the premium version.