With the best VPN for Apple TV you can unblock geo-restricted streaming sites like Netflix, BBC iPlayer, and Hulu anywhere in the world. This massively increases the number of TV shows and movies you can watch.

Frustratingly, native VPN apps are not available on the tvOS App Store, but there are simple workarounds to setup and use a VPN with Apple’s tvOS.

One way is to use a feature called Smart DNS, which allows you to connect to a VPN server by changing the DNS settings on your Apple TV. Alternatively, you can AirPlay content from your iPhone, iPad or Mac to your Apple TV.

We tested over 69 VPN services to find the very best VPNs for Apple TV.

The best VPNs for Apple TV are:

ExpressVPN, CyberGhost and Surfshark all come with Smart DNS so using them with Apple TV is very easy. However, Windscribe and PrivateVPN don’t, so you’ll have to either use AirPlay, or install the VPN on your home router. 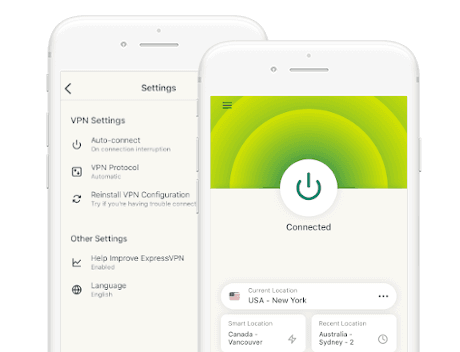 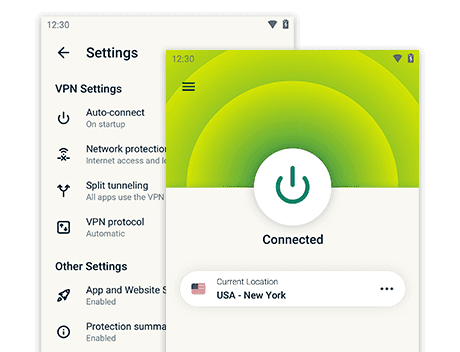 ExpressVPN is by far the best VPN for Apple TV out there. It consistently unblocks the widest selection of streaming services including over 19 Netflix libraries, BBC iPlayer, Hulu, Disney+, HBO Max, and many more.

The great thing about ExpressVPN is its high compatibility with Apple TV thanks to its SmartDNS tool called MediaStreamer. All you need to do is go into your Apple TV’s DNS settings and update them with the desired ExpressVPN DNS server credentials.

If you don’t want to use MediaStreamer, you can always cast your iOS or macOS device screen to Apple TV using AirPlay. ExpressVPN has in fact some of the most user-friendly apps for iPhone, iPad and Mac device.

ExpressVPN also has the widest selection of pre-configured routers we’ve seen, with an option to specify setup requirements when you buy for a ‘plug-and-play’ option. You can also install ExpressVPN on your own home router, although it’s easier to use either MediaStreamer or AirPlay.

We regularly test ExpressVPN’s speed, both locally and internationally, and the results we get are always exceptional. Particularly on long distance connections, ExpressVPN can’t be beaten.

Overall, ExpressVPN is an outstanding VPN for streaming on Apple TV. If you ever run into issues with the VPN, get in touch with its 24/7 live chat support team who in our experience will resolve most issues in little time. 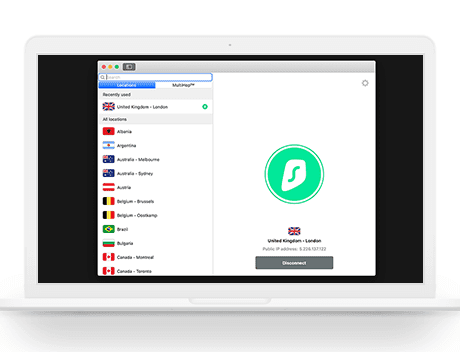 Surfshark has been improving month after month as a streaming VPN. In the past it suffered from lacklustre speeds at times, but it’s now registering much faster speeds, which are key for HD and 4K streaming.

It currently unblocks a wide selection of streaming services like Netflix, BBC iPlayer, Hulu and Disney+. Just like ExpressVPN, Surfshark comes with a Smart DNS tool, making it highly compatible with Apple TV. You can read more about this in our full guide to Surfshark and Netflix.

Surfshark’s native iOS and macOS apps are also very good and easy to use. Using AirPlay and your VPN together couldn’t be easier. While Surfshark doesn’t have a pre-configured router, you can set the VPN on your home router. Surfshark’s router-specific online guides make the installation easier for you.

Of course one of Surfshark’s main benefits is its affordability. While it’s not as fast as ExpressVPN, especially over long distances, Surfshark is considerably cheaper and if you’re on a budget then it could be the right VPN for you. 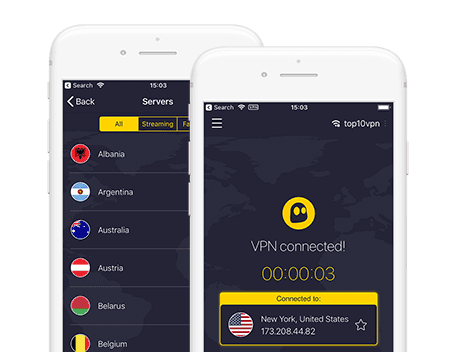 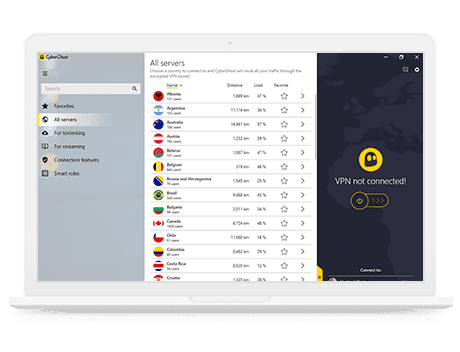 CyberGhost VPN is a budget service VPN that unblocks Netflix in the US, UK, France, and Germany. It also has a Smart DNS tool, just like ExpressVPN and Surfshark, which makes using CyberGhost a lot easier on Apple TV.

Similarly to its two rivals above, the CyberGhost iOS and macOS apps are user-friendly and work well with AirPlay. You can also use CyberGhost with your home router, or buy a pre-configured router, instead.

The main issue we have with CyberGhost is that it only unblocks four Netflix libraries, substantially less than its other rivals in this list. Also, its international VPN speeds aren’t the quickest. In fact, our download speeds fell by 74% when we tested connecting from London to a New York VPN server. This means HD streaming is not always possible, depending on the server location you choose.

Overall, CyberGhost is a very good VPN for Apple TV. Its 24/7 live chat customer service is one of the best we’ve seen, and it also has a very generous no-questions-asked money-back guarantee of 45 days. 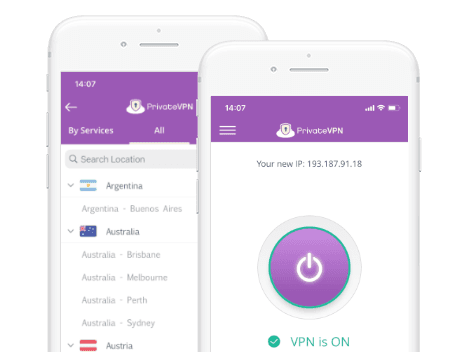 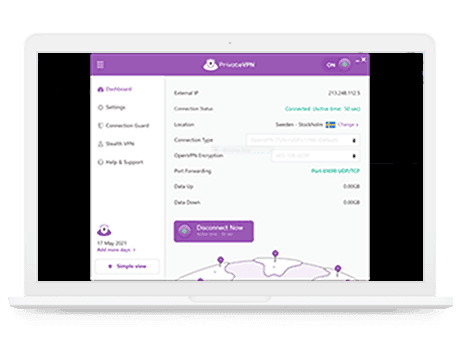 PrivateVPN is a very cost-effective VPN that doesn’t sacrifice too much quality. Especially when it comes to speed, frequently outperforming bigger name providers in our speed tests. This is deal for streaming on Apple TV.

Talking about streaming, PrivateVPN is one of the best VPNs for Netflix, unblocking 32 international libraries. It also works well with BBC iPlayer, Hulu and Disney+.

Sadly, it doesn’t have a Smart DNS tool, which is the main reason why we rank it only fourth. It does have good iOS and macOS apps, as well as pre-configured VPN routers. These PrivateVPN routers aren’t quite as plug-and-play as ExpressVPN’s, but these online guides should make the router installation as painless as possible.

While we didn’t experience issues while testing PrivateVPN over a few weeks, if you do need help from customer support, then you may get frustrated. It’s 24/7 live chat support team is not as helpful as it needs to be, and it’s sometimes unavailable for long periods of time.

Given the very cheap price, it’s worth considering PrivateVPN but the fact that it doesn’t have Smart DNS is an issue. 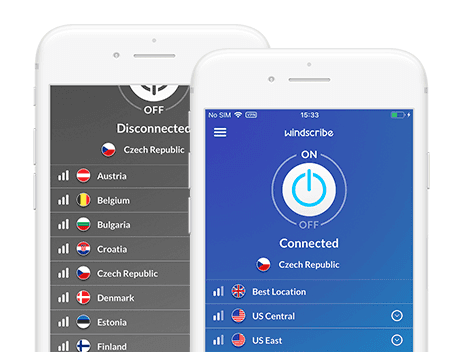 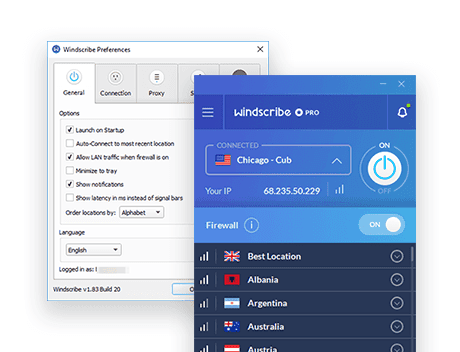 Windscribe is unique in the way that it works with 42 different Netflix libraries, including US, UK, South Korea, Australia, and Brazil. It’s a feat that not even ExpressVPN can beat.

This VPN comes in two versions: free, and paid. The free version of Windscribe is able to unblock US Netflix and BBC iPlayer, which is almost unheard of these days. However, you can only access five server locations and data usage is capped at 10GB per month.

Unfortunately, Windscribe doesn’t have Smart DNS functionality. To use with your Apple TV you can run the VPN on your iOS or macOS device, and use AirPlay to screen mirror the stream. Or, you can set Windscribe up at router level.

To avoid any surprises, always make sure that the ‘Unlock Streaming’ option in your Windscribe ‘My Account’ section is always switched ‘On.’

All in all, Windscribe is a good VPN for Apple TV, which you can try for absolutely free.

What Type of VPNs Work with Apple TV?

Technically, any VPN that you can set up on a router can be used with your Apple TV.  If a VPN provider offers the ability to configure the VPN on a router, then it’s worth considering for Apple TV. However, router installation is not always straightforward, hence a provider needs to provide comprehensive step-by-step guides

But, the VPNs that work best with Apple’s tvOS are the ones that come with SmartDNS functionality. We explain how this works below.

Alternatively, VPNs that have user-friendly iOS and macOS are also good options. If you have an iPhone, iPad or Mac device, you can smoothly AirPlay your video to Apple TV.

How To Set Up and Use a VPN with Apple TV

These are all the methods we have found for using Apple TV with VPN:

The most popular method of using a VPN with Apple TV is to use Smart DNS. In other words, you update the DNS settings of your Apple TV with those of your VPN server of choice.

This is by far the easiest way to setup a VPN on Apple TV, but many VPN services don’t offer Smart DNS functionality. We recommend using ExpressVPN, Surfshark or CyberGhost – they come with a Smart DNS feature, and unlock the most popular streaming services.

2Using a pre-configured router with VPN

Another way of using your VPN with Apple TV is to buy pre-configured, or pre-flashed, VPN router. You can order VPN routers from selected VPN providers, and they arrive almost completely setup. Once you received the router, ensure you complete the setup by following the online instructions on your VPN provider’s website.

3Configuring a router to use with VPN

Configuring a router yourself is slightly more difficult than purchasing a pre-flashed router, but can be cheaper. But, you can’t do it with just any router, though. In fact, you’ll need a router that has either been configured with an OpenVPN client, or which can be flashed with new firmware.

We’ve put together a detailed walk-through for you in our dedicated VPN router guide.

If you’re looking for more in-depth and step-by-step instructions on how to install a VPN on your Apple TV, head over to our dedicated VPN setup guide.

The best free VPN for Apple TV is Windscribe, which is also the best overall free VPN. The free version of Windscribe is reasonably fast, safe and it unblocks US Netflix and BBC iPlayer, which is extremely rare among free VPNs.

While it doesn’t have a SmartDNS feature, it does have an iOS and a macOS app, so you can use AirPlay with them. Also, you can install Windscribe Free on your router, as we explained above.

But, just like almost all free VPNs, Windscribe has several limitations: you can only connect to five server locations, and you’re allowed 10GB of data usage each month. Ultimately, while Windscribe is by far the best free VPN in 2021, free VPNs can’t beat a good paid VPN.

What Is Smart DNS?

SmartDNS is a tool used by some VPNs to change a devices DNS settings, so that you can connect it to a VPN server. Using SmartDNS doesn’t change your IP address, though.

Using SmartDNS is a very easy way to connect to a VPN server on gaming consoles, and Apple TV of course, but it’s not a full VPN solution. This means that it will not encrypt your connection, nor will it make you anonymous online. 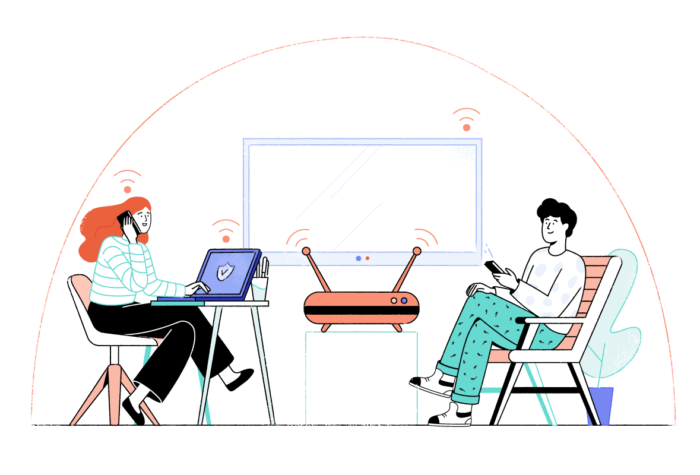 When selecting a router for your VPN there are several important factors that you should keep in mind – a VPN compatible router can cost much more than a standard router (most are priced at over $100) so you only want to make the purchase once.

For a router to support a VPN, it needs to either support an OpenVPN client or include the capacity to be flashed with new firmware. A router which supports OpenVPN will get you set up quicker.

You will need to bear in mind how many devices you plan to connect to the router, as some have limits. Similarly, depending on the size of your home you may need a router with greater range.

If you are not comfortable with this more technical process we recommend purchasing a pre-configured router from your VPN provider – these are available for most of our top picks for Apple TV.

For a proper look at VPN routers, along with their benefits beyond Apple TV, see our guide to what is a VPN router.

Can I Use NordVPN for Apple TV?

NordVPN is a very popular VPN, and currently our #2 ranked VPN for 2021, that can also be used with Apple TV. The main reason why we haven’t included it in this guide is because NordVPN currently doesn’t unblock Netflix or BBC iPlayer when the VPN is installed on your router.

Until this issue is fixed, the VPN services we recommend for Apple TV are likely to meet your expectations over NordVPN. Having said this, NordVPN does have very good iOS and macOS apps, which you can use with AirPlay.

Popular VPNs with no Smart DNS