IPVanish claims that it’s the “World’s Best VPN” on its homepage.

Seen this sort of statement before, right?

It’s certainly very popular with Android and Fire TV Stick users, but is it really the best overall?

We never take a provider’s word for it, so we put IPVanish VPN to the test – a very extensive one – to see if its claims are to be believed.

In this IPVanish review you’ll find all the answers you need, especially:

But before we answer each of these (and many more) questions, lets see the pros and cons of IPVanish VPN:

As you can see IPVanish certainly does have many strengths to shout about.

It’s now time to take a close look at who’s behind the company and whether it’s still a log-free VPN service.

IPVanish VPN was first released in 2012 by its former US-based owner HighWinds Network Group. IPVanish has since been acquired by StackPath and in 2019 by J2 Global which are both US-based companies.

As you can see IPVanish has always been operated by companies headquartered in the US, which does have very intrusive surveillance laws and is a member of the Five-Eyes data sharing agreement.

The fact that it’s based in the US is largely irrelevant though: its no-logs policy means no identifiable information is collected by the VPN provider. This was not the case a few years ago, as you’ll find out below.

Considering most VPN logging policies track at least server load or login information for maintenance purposes, this is what makes IPVanish a standout VPN for privacy.

However, it wasn’t always like this. In 2016, under previous management, IPVanish was found to be collecting logs when it handed information over to US authorities to aid in the prosecution of a user.

When it first received the non-legally binding summons, it only confirmed that the user’s IP address belonged to that user, but when pressed by the authorities, it turned over detailed connection logs that could then be used to identify the suspect.

IPVanish has since being acquired twice, and it appears to have turned things around. We carried out due diligence and grilled the company’s leadership and we’re happy to say that we no longer have concerns about its approach to user privacy.

IPVanish is a consistently fast VPN

IPVanish is a very fast VPN service, with some of the quickest speeds we’ve seen in our tests.

The VPN didn’t slow down our Internet connection too much, with speeds fast enough for HD or 4K streaming.

When connected to IPVanish:

Downloads, uploads and latency when using IPVanish are among the best we’ve seen, making this VPN a very smart choice for gamers and torrenters.

It’s also one of the most reliable VPN services we’ve seen, providing consistently fast speeds from one test to the next.

Here are the average speeds you can expect when using IPVanish to connect out to various locations around the world (from the UK):

IPVanish VPN gives access to more than 1,300 servers worldwide and over 40,000 IP addresses, which is one of the highest number of IP addresses provided by a VPN service. This means that you’re unlikely to experience VPN server congestion and slow speeds while connected to IPVanish.

The 50 countries in its server network are well spread-out, including some less common nations like Moldova and the Philippines (in addition to all the typical countries like US, UK, Canada, Australia, and more). US-based users can choose from IPVanish servers in:

We’d love to see more city-level selections in Australia – mainly Perth which is located on the West coast – and more servers in South America, other than Brazil and Colombia. The overall high number of VPN servers is enough to offset these minor complaints, though.

What’s more, IPVanish is one of the few VPN providers to own its entire (or very close to) server infrastructure, meaning they rent very few servers from third-parties.

Despite its fast speeds, IPVanish it’s not one of the best VPN services for streaming.

Most of IPVanish’s US and UK servers work for Netflix, although it can sometimes take a while to load.

As for BBC iPlayer, all of its UK servers are currently blocked and, according to IPVanish, they aren’t looking to fix this. If this is important to you, see which VPNs unblock BBC iPlayer, or read our CyberGhost review, our current top pick for BBC iPlayer.

We also tested IPVanish with Disney+ and had some success, but access is inconsistent. If you want to access Disney+ more reliably, we recommend checking the VPNs that do unblock Disney+.

IPVanish also confirmed it isn’t working with Amazon Prime Video or Hulu at the moment.

IPVanish is, however, one of the best VPN services for torrenting we’ve tested, with very fast speeds and a watertight logging policy.

Torrenting is permitted on all of its servers and when we checked for IP or DNS leaks, we found none.

Not to mention that it has a VPN kill switch, but more on this below.

Therefore, we recommend IPVanish VPN for all P2P activity including Kodi for which it’s currently the #1 VPN service.

IPVanish is very upfront in saying that it won’t work in China, despite being equipped with an array of obfuscation tools.

We really appreciate IPVanish’s honesty on this topic. IPVanish also provides a useful list of other countries the VPN won’t work in: 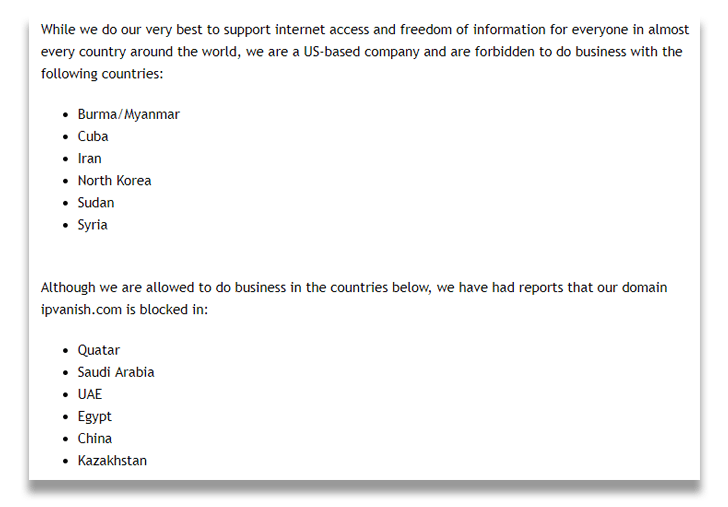 IPVanish states that it is “forbidden to do business in”:

IPVanish states that its domain, ipvanish.com, is blocked in:

It’s not just IPVanish’s domain that is blocked in these countries, many users have also reported that its VPN apps don’t work either.

Based on this, if you live or are travelling to a high censorship country you should use one of these VPNs to bypass aggressive internet censors.

Works with all major platforms & devices

IPVanish has custom VPN apps for all popular mobile and desktop operating systems so you can use them on:

You can also set it up on other devices using manual workarounds (see the ‘Games Consoles & Streaming Devices’ section below).

You can also use IPVanish with gaming consoles and streaming devices.

IPVanish is our number 1 choice for the popular Amazon Firestick, and it’s super easy to install and use.

You can use it up to 10 devices at once, which is very generous (the average among VPN providers is about 5 simultaneous connections).

You can also install IPVanish on your home router which allows you to use it on your PlayStation, Xbox, Roku, and many more devices.

Unfortunately IPVanish doesn’t have any VPN browser extensions, which is a real shame. This is one of the very few areas where it seriously lags behind its competitors.

If you want to use a VPN extension with your web browser then take a look at our:

One of the safest VPN providers

We believe that IPVanish is one of the most secure and private VPN services available.

The VPN app mainly uses the OpenVPN and IKEv2 protocols and encrypts your online traffic with the ‘unbreakable’ AES-256 cipher, meaning you’re protected at all times. You can also connect using L2TP/IPsec, if you prefer.

IPVanish has a VPN kill switch to protect your privacy in case of a connection drop, plus a host of other advanced features. This even includes SOCKS5 web proxy, which masks your IP address on P2P and VoIP connections – although it doesn’t encrypt traffic.

We also found IPVanish to be free of IP or DNS leaks in our most recent tests: 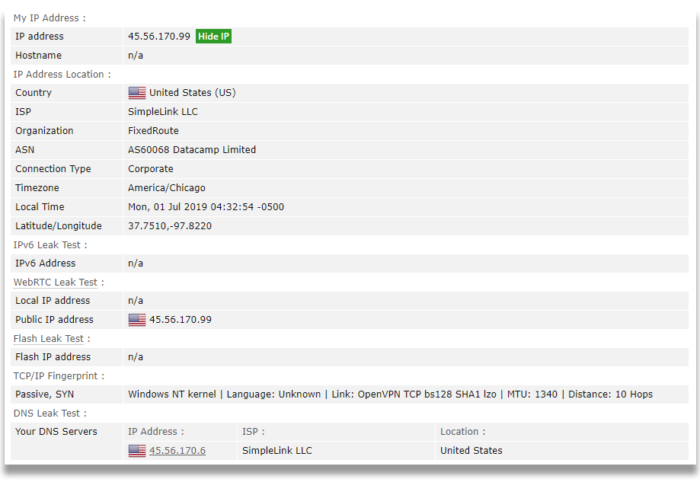 IPVanish’s leak test results when connected to its Chicago server

How to Install & Set Up IPVanish

The desktop VPN clients are perfectly simple to use and have recently gone through a complete makeover, which was long overdue.

It has a light and dark mode to choose from, too, which we like.

The advanced privacy settings are also easy to navigate, making IPVanish suited to both VPN beginners and more experienced users.

The mobile apps do lack a few key features, such as the VPN kill switch, but they’re still fast and secure.

IPVanish customer support agents were friendly and helpful no matter what we asked them. IPVanish also has 24-hour live chat support on its website.

The company also has excellent email support, with impressively well-written responses, as well as an online FAQ section for straightforward solutions to the most common issues.

If for any reason the VPN isn’t working properly, you should be able to fix it quickly by following these FAQ guides.

Worth it for the level of service

IPVanish is reasonably priced and affordable. It is neither the cheapest VPN service, nor the most expensive.

This January it’s running a special promotion, with 66% off the basic price of a two year subscription and 250GB of cloud storage.

The IPVanish seven-day money-back guarantee is 100% no-questions-asked and you’ll be refunded within 10 working days.

Our only issue is with the iOS policy – if you sign up for IPVanish via the App Store then you won’t qualify for the money-back guarantee. That seems a bit harsh.

Another drawback is that IPVanish only accepts credit cards, debit cards, and PayPal. Unfortunately neither cryptocurrencies like Bitcoin nor international options like Alipay are currently supported.

Do We Recommend IPVanish?

We absolutely recommend IPVanish, and if you’re a Fire Stick TV or Kodi fan then it’s the best VPN for you right now.

But IPVanish does have a few limitations that you need to be aware of, particularly:

Sound like a problem to you? Then take a look at the alternative VPNs below.

As our top-rated VPN service, ExpressVPN excels in almost every department. It's Fire TV Stick app may not be as good, but ExpressVPN beats IPVanish in most other respects. Read ExpressVPN review

If you live in or plan on traveling to China (or any other high censorship country) take a look at VyprVPN and its very efficient obfuscation technology. Read VyprVPN review

Already use IPVanish? Tell us what you think.

IPVanish does what it should and it does it well.

A great service at a great price. Stable and reliable connections with fast speeds. The IPVanish application works and looks great on both Mac and iPhone. The iPhone app has an OnDemand connection feature that ensures you’re always using the service even whilst jumping between WiFi networks or when reconnecting to your service provider. Awesome!

OK but not for BBC

Long term user. Takes long time to load up on and connect on iPad independent of router speed and no good for BBC which recognises all UK servers as outside of UK and blocks access.