Big changes in the dark web market landscape have driven up prices for hacked consumer data. This update to the Price Index shows how PayPal, Airbnb and Facebook log-ins are being sold for up to six times as much as earlier this year. 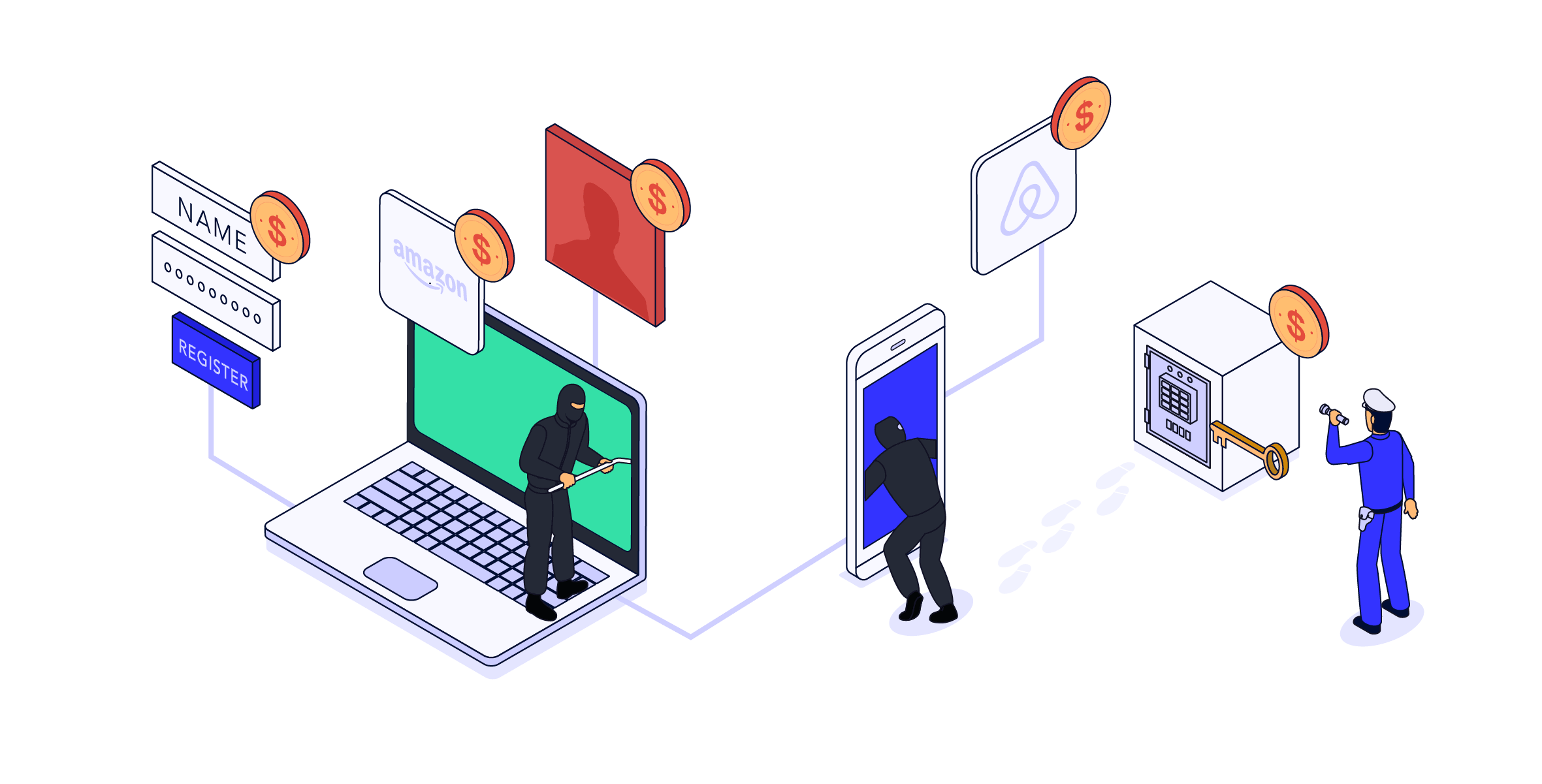 This June 2019 update of the Price Index comes at a unique time, following the takedown of two major dark web markets in quick succession by the authorities and a sharp spike in prices.

In order to assess the potential impact of this on consumers, we have reviewed a selection of the most important hacked log-ins and accounts to track their changing value to identity thieves.

Alarmingly, the prices have increased on average by almost three times compared to the start of the year, meaning that someone’s entire identity could potentially now be worth £2,400, up from around £800 in February.

Stolen consumer data is more lucrative for hackers and cybercriminals than ever before. This should serve as notice for everyone to be on their guard against identity theft, or risk becoming a victim.

Notable price surges include Airbnb (£20), Facebook (£14) and PayPal (£84.50) due to the sheer scope of potential fraud that can be committed by scammers in possession of these accounts.

The average person has dozens of accounts which form their online identity, all of which can be hacked and sold. Our team of security experts reviewed tens of thousands of listings across three of the most popular dark web markets – Berlusconi, Tochka and Nightmare. These sites deliberately obscure themselves from the public and can only be accessed through the Tor browser. They are used to buy and sell personal data, along with other contraband including illicit drugs and hacked software.

We created the Price Index to help the UK public understand the value of their personal data, and why it’s worth protecting.

Here are a few security tips on how to protect your sensitive online information:

The value of hacked Airbnb accounts is soaring as the 2019 holiday season approaches.

The accommodation marketplace is perennially popular with fraudsters, however, thanks to the range of scams that compromised Airbnb accounts represent. They can be used to create bookings for houses which criminals then burgle, while hacked hosts on the same app can be used for phishing. Fake listings for luxury properties can also be used to defraud consumers of large sums.

Airbnb has introduced two-factor authentication, but that hasn’t stopped crimes from happening.

Amazon accounts (£22.09) continue to grow in popularity with fraudsters thanks to the prevalence of multiple stored payment methods, typically both credit and debit cards. Not only can they buy a huge range of costly items for resale but also high value gift cards to redeem on their own accounts.

The sheer scale and impersonal nature of Amazon’s operations also make it appealing for scams.

The value of bank accounts on the dark web has almost tripled in just six months. This increase is likely driven by a range of factors. The fall of two big markets in such a short time, along with the likely subsequent arrest of key vendors, has caused a major – if temporary – reduction in easy availability of all accounts. Those sellers still active can therefore charge a premium.

We are also seeing in increase in listings that not only offer online banking credentials and relevant personal information but also full packages including debit cards, PINs, and for mobile banking services such as Monese, a burner phone and SIM to access them.

We are also currently seeing more hacked accounts for sale that have high balances, giving criminals access to thousands of pounds instantly.

Criminals are even able to travel internationally, as Avios siphoned off from hacked BA accounts can be used on multiple airlines to book discounted flights.

The value of accounts increase in line with the total number of air miles available. Double the points typically equals double the price tag. The current rate is just 18p per 100 air miles. Prices have increased since the mega breach the airline suffered last year, where the payment and passport details of 380,000 customers were stolen.[1]

Hacked credit cards are the bread and butter of the dark web economy in stolen data and prices remain stable at around £33 per account. Our data focuses solely on genuinely hacked accounts, as opposed to fraudulently-opened new credit cards using stolen identities.

Debit cards are similarly priced at around £46. The higher value is because it’s easier to realise the value of debit cards into cash, and because accounts with high balances are being put up for sale more often.

Genuine physical identity documents, such as passports and drivers licenses, are incredibly valuable for identity theft. Typically this means fraudulently opening lucrative lines of credit in the passport-holder’s name, which is then swiftly drained, leaving the unwitting victim with a huge debt.

Stolen documents of this nature – intercepted in the mail, for example, or stolen and sold to criminals by corrupt officials – fetch very high prices. UK passports, marriage and birth certificates all trade for around £2,000, but can fetch as much as £5,000.

Passport scans sell for only a fraction of the price due to their digital nature and the greater risk of not being accepted. They are typically sold in batches of ten scans or more for around £22 each.

Hacked eBay accounts are also particularly attractive as not only do they allow criminals to dupe buyers into sending them money for fake listings but also to buy expensive goods with the account owner’s funds to intercept and sell on.[2]

Fraudsters also buy eBay accounts in the hope of gaining access to associated PayPal accounts and indeed we are seeing vendors offer the two accounts together as a value bundle.

Prices for hijacked Facebook accounts continue to enjoy a resurgence as it becomes increasingly clear that the platform’s 2.38 billion users aren’t abandoning it any time soon.

Hacked Facebook accounts offer three routes to profit for cybercriminals. First, they are an incredibly rich source of personal information that can be used to facilitate identity theft, helping criminals answer security questions for example.

Finally, as for most online accounts, fraudsters bank on the fact that many people still reuse passwords across multiple accounts, especially those they use often like Facebook. By gaining one set of valid credentials, hackers use software to automate checking that log-in against thousands of other online services. The results will either be used for identity theft or sold on the dark web for a profit.

As with Facebook, Netflix and Spotify log-ins offer a route into potential identity theft. An added bonus is that opportunistic criminals can also stream TV shows and movies and music for free, at least until the true owner notices their account has been compromised.[3] The continued growth in the value of these accounts reflects just how ubiquitous they have become.

Ironically, stolen accounts for budget supermarket Morrison’s (£16) are more expensive than those of its more upmarket competitors due to the potential for exploiting its rewards system.

This is four times the cost of Ocado (£4) for example, while Tesco accounts are least appealing, priced at less than a £1 each.

All these accounts offer a route to profit via stored cards and other personal information, such as home address, along with password re-use.

Given that pricing reflects demand, Ocado and Tesco accounts have proven less profitable for scammers in the past, likely due to better security, less lucrative rewards schemes or fewer vulnerable stored payment methods.

Paypal has long been the scammer’s favourite. High balance accounts can be siphoned off directly, however as PayPal accounts are also often connected to multiple cards and bank accounts, thieves may also have access to significantly greater funds.[5] This functionality also means that PayPal accounts are also typically used as “middleman” accounts to facilitate all sorts of online scams.

Fraudsters in possession of a hacked PayPal account can also try to double their money by using the account funds to run various well-established chargeback scams on merchants who accept PayPal.

The recent surge in pricing for these accounts to around £84.50 each is likely due to the squeeze in supply caused by the disappearance of two major dark web markets (see Bank Accounts above for more info), along with the growth of PayPal Credit. Hacked PayPal personal and business accounts can be used to set up PayPal Credit accounts with high credit limits, which are then either drained or sold on for a huge profit. PayPal Credit accounts with high limits in the tens of thousands that have been created in this way sell for an average of £3,000, and as much as £12,000 each.

As with hacked streaming services, these accounts give the buyers access to high-quality media that’s otherwise locked behind a paywall. Prices have increased significantly in a short space of time, suggesting that there is strong demand for these accounts – although it does remain a niche offering on the dark web markets.

There have been frequent reports of scammers using hacked Uber accounts for expensive trips, often in Russia.[7] This cheeky scam is made simple thanks to the requirements for a credit card or PayPal account to be stored in the account.

Hacked email accounts tend to be sold either in massive dumps from large scale data breaches or as small batches of, or even individual, verified emails. For the purposes of the Price Index, we disregard big dumps as unit prices work out at tiny fractions of a penny each, and accounts are not guaranteed to be accessible or even valid.

Verified emails, such as Yahoo and Gmail, on the other hand, trade for a few pounds each. That may not seem much for an account that can act as a skeleton key to your online life, however increasing adoption of two-factor authentication keeps overall prices relatively low.