VPN stands for “Virtual Private Network”. VPN software is designed to protect your privacy, security, and freedom online. It establishes an encrypted tunnel between your device and a remote VPN server, creating a private network inside a public internet connection. 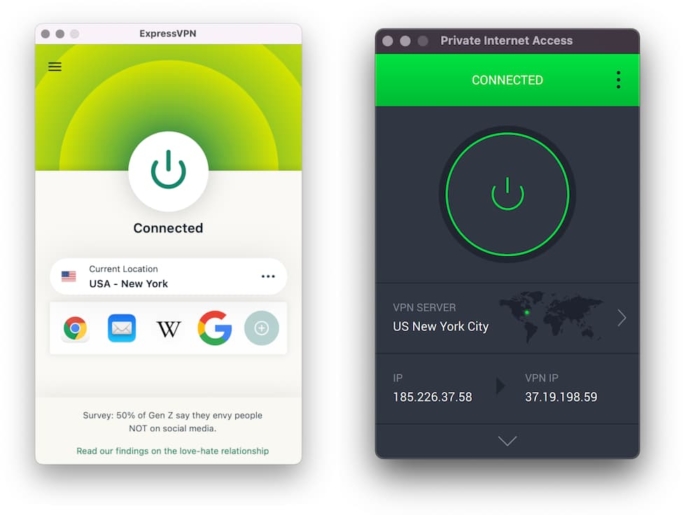 VPN stands for Virtual Private Network. It’s a type of software that achieves three key benefits when you connect to the internet: stronger security, improved privacy, and greater freedom.

When you connect to the internet using a virtual private network, the software creates an encrypted connection between your device and a remote VPN server.

A personal VPN service (not to be confused with a business/corporate VPN) encrypts your internet data transfers and changes your public IP address to the one assigned by the remote server.

As a result, personal VPNs let you access free public WiFi securely and mask your internet traffic by hiding your IP address. The best ones can even unblock geo-restricted websites and applications.

The three key advantages of using a VPN are:

VPN services aren’t just for computers or laptops. You can also install a VPN application on your mobile phone and tablet. The best VPNs even work on smart TVs, games consoles, and routers, too.

In this beginner’s guide to virtual private networks, we explain in detail what a VPN is, how it works, and why you need one.

We’ll also cover the advantages and disadvantages of VPNs, how much they cost, and what you need to look out for when choosing a safe VPN service.

What Is a VPN: Video Explainer

To help you understand the basics of VPN software, we created a short video explaining what a VPN is and how it works:

If you’re still unsure about how a VPN works after watching the video above, keep reading this guide or ask us a question in the comments section at the bottom of the page.

Have a specific question about VPNs? Here are all the articles in this introductory course:

Why Do You Need a VPN?

A good-quality VPN has many purposes related to internet privacy, security, safety, anonymity, and freedom.

In 2020, we collaborated with GlobalWebIndex to interview VPN users around the world and find out why they used a VPN. The common reasons to use a VPN are to:

These are the most popular uses, but there are also other reasons for using a virtual private network.

How Does A VPN Work?

A VPN works by creating an encrypted connection between your device and a private VPN server.

This secure connection is known as the VPN tunnel, and a VPN uses a range of VPN protocols to transfer the data.

VPNs create an encrypted tunnel between your device and a remote server.

By encrypting your data and transferring it through a tunnel, the VPN prevents internet service providers (ISPs), governments, and hackers from spying on your web activity.

Once your traffic reaches the VPN server, it is decrypted and sent on to the website or app you’re using. This has the effect of hiding your IP address because the connection is being relayed from the VPN server’s location, and not your location.

In short, a VPN encrypts your internet traffic data and replaces your IP address with the IP address of the server you’re connected to.

To learn about this process in more detail, read our full explanation of how VPN services work.

What Does A VPN Hide?

A VPN hides your IP address and online activity from your ISP, the Government, and the websites you visit. It does this by encrypting your data and routing your web traffic through a remote VPN server.

Connecting to a VPN can hide:

However, a VPN’s ability to conceal your personal data is dependent on who you’re trying to hide it from. Different entities have different levels of access to your information.

For example, your Internet Service Provider (ISP) assigns and administers your real IP address, which means you can’t hide it from them. You can, however, conceal your browsing activity from your ISP.

Similarly, the websites you visit will still be able to see your browsing activity. However, you can hide your real IP address from them. They’ll be able to see what you do, but not who you are.

What Are the Different Types of VPN?

These VPNs use technologies like OpenVPN or WireGuard to create encrypted connections to remote servers, helping users to obfuscate their IP address and evade censorship or geographic restrictions.

Where we describe the features of VPNs in this article, we’re referring to personal VPN services exclusively.

By comparison, remote access VPNs are typically used by employees to access their company’s files when traveling or working from home. In the absence of a stable internet connection, a mobile VPN may also be used instead.

Finally, site-to-site VPNs are most commonly used when there are multiple companies trying to connect to a single network simultaneously.

VPN applications are available on desktops, smartphones, and many more devices. When you use a VPN service on your mobile device, it’s sometimes referred to as a mobile VPN.

Mobile VPNs work on both WiFi and cellular data (e.g. 4G and 5G), but you will need an existing internet connection for the service to connect.

In other words, you can’t use a VPN without the internet.

Once connected to a VPN server, all your phone’s internet activity is encrypted and routed through the VPN server. Your IP address also changes.

Two things to be aware of with mobile VPNs are:

With data theft, mass surveillance, and internet censorship on the rise globally, a virtual private network has become a very important cybersecurity tool.

But, is a VPN always safe to use? The short answer is no.

While there are many legitimate and safe VPN services, there are also a large number of dangerous VPN products you must avoid.

Even paid-for VPNs can be unsafe to use, if you’re not aware of a few important concepts:

VPN Logging Policies: If your VPN service keeps a record of your originating IP address, when you connect to its servers, and which websites you visit, it is a threat to your privacy. This information could leak, or governments could force the VPN company to hand it over. For maximum security, you must check a VPN’s logging policy, and use a verified no-logs VPN service.

VPN Leaks: The purpose of a VPN is to hide your IP address and keep your internet activity private and secure. A VPN that leaks your IP and DNS credentials is not doing its job, and you shouldn’t use it. Use our VPN leak test tool to see if your service is leaking, and our kill switch tool to test if your real IP address isn’t exposed following a VPN disconnection. You can also test your DNS servers directly.

VPN Laws: VPNs are legal in most countries. However, in some countries – including China, Turkey and Russia – using a VPN is either illegal or severely restricted.

VPN Jurisdictions: Different countries have varying legislation surrounding the privacy of their citizens’ data. For instance, governments in the Five Eyes alliance, impose strict data retention laws and regularly force companies to hand over records of user web activity. Your safest option is to use a VPN based in a privacy-friendly jurisdiction.

Virtual Server Locations: The location of the VPN server you connect to can be important for privacy and security. Many VPN services use virtual server locations, where the advertised IP address doesn’t match the server’s physical location. This approach is often used to assign VPN IP addresses for countries where placing physical VPN servers is problematic.

How Much Do VPNs Cost?

A secure premium VPN costs on average $3.94 per month on a yearly or multi-year subscription. However, the average VPN price increases to $11.34 on a pay monthly basis.

The price of a VPN depends on a number of factors, including:

Typically, you’ll have to pay for the entire VPN subscription up front.

Surfshark is one of the best cheap VPNs we’ve reviewed.

A higher price doesn’t always indicate better quality, though. Do your research to find the best VPN for your needs (e.g. streaming, torrenting, private browsing, etc.) at a price that fits your budget.

Are There Disadvantages to Using a VPN?

The main disadvantages of using a VPN come from not understanding its limitations.

A VPN isn’t a catch-all solution for all your online privacy and security issues.

Below is a summary list of the main disadvantages and limitations of VPNs:

We always recommend using a VPN in conjunction with antivirus software and a password manager for improved security.

What Is the Best VPN?

Since 2016, we’ve tested and reviewed many VPN applications, and currently the best VPN service is ExpressVPN.

Every time we test and review ExpressVPN we verify that it’s still very fast, secure and works well for streaming, torrenting and gaming.

The simple truth, however, is that there is no definitive ‘best’ VPN.

While ExpressVPN is our highest-rated VPN, it may not be the right VPN for you. That depends entirely on what you want a VPN for. For example: