Virtual Private Network (VPN) services fall into four main types: personal VPNs, remote access VPNs, mobile VPNs, and site-to-site VPNs. In this guide, we explain how each of these VPN types work and when to use them. 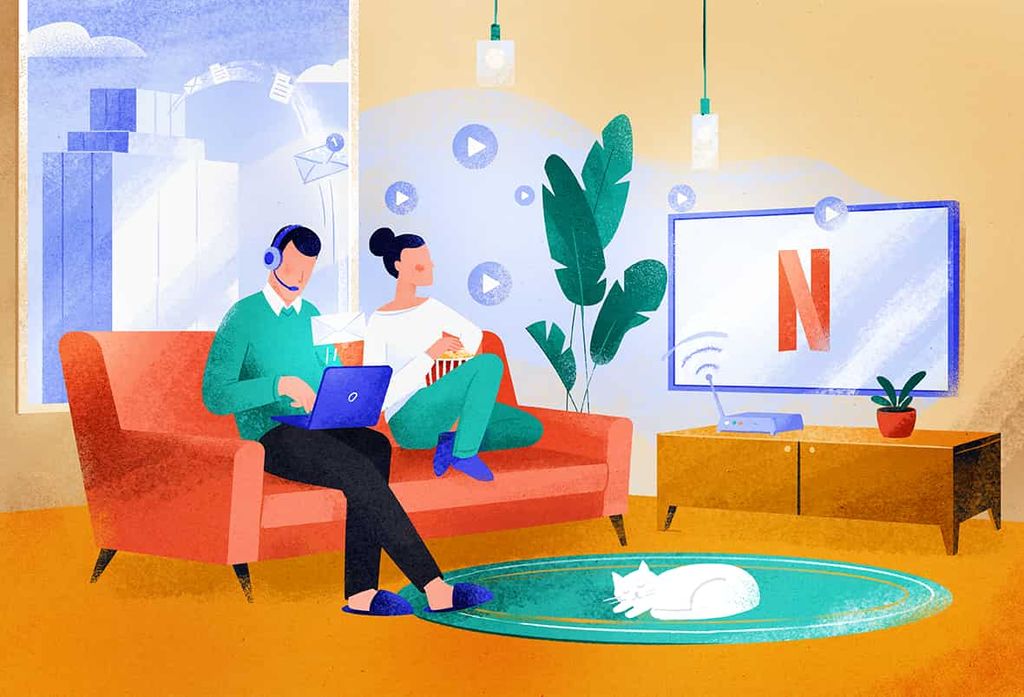 A VPN is a service that creates a private tunnel within a public connection (e.g. the internet). VPN software allows its users to send and receive data transfers securely.

The four main types of VPN are:

VPN review websites mostly write about personal VPNs. These are used to create secure and private connections to the open internet, as well as for bypassing firewalls and geographic internet restrictions.

By comparison, businesses use a remote access VPN, which enables employees to access the company’s private network when traveling or working from home.

If the employee doesn’t have a consistent or stable internet connection, then a mobile VPN may be used instead.

Finally, when there are multiple sites or multiple companies trying to connect to a single private network (not just a single employee), then businesses will need to use a site-to-site VPN.

Here’s a comparison of these four main VPN types:

In this guide, we’ll explain each of these personal and business VPN types in more detail. We’ll cover how they work, what they are useful for, and provide examples of products in each category.

A remote access VPN lets you use the internet to connect to a private network, such as your company’s office network.

The internet is an untrusted link in the communication. VPN encryption is used to keep the data private and secure as it travels to and from the private network.

There are different ways a remote access VPN can be used, for example:

EXPERT TIP: While remote access VPNs remain useful, cloud storage is a popular alternative if you just want people to be able to access files remotely. Cloud storage (such as Dropbox) uses an encrypted browser connection to protect your data, and is much easier to set up than a VPN is.

To use a remote access VPN on your device you typically need to install client software or configure your device’s operating system to connect to the VPN. There also needs to be a VPN server on the network end of the connection.

There can be many client devices, as many different users can connect to the VPN server. Between them, the client software and VPN server manage the VPN connection.

NOTE: This type of VPN is typically licensed according to how many simultaneous users need to access the VPN.

A personal VPN service connects you to a VPN server, which then acts as a middleman between your device and the online services you want to access.

The personal VPN – sometimes also called a ‘consumer’ or ‘commercial’ VPN – encrypts your connection, hides your identity online, and lets you spoof your geographic location.

A personal VPN service differs from a remote access VPN in that it doesn’t give you access to a private network.

Instead, a personal VPN works by giving you access to the public internet, but over an encrypted connection.

When to Use a Personal VPN Service

There are many reasons to use a personal VPN. Some of the most popular ones include:

For a more extensive list, check out our guide to what VPNs are used for.

EXPERT ADVICE: There are many protocols available for encrypting the connection. One of the most popular and most secure protocols is OpenVPN. Emerging protocols such as WireGuard and ExpressVPN’s proprietary Lightway protocol can be faster, and also work well.

Avoid using PPTP (which is easily hacked), L2TP/IPSec (which may be compromised by the NSA), and SSTP (which is vulnerable to attack).

We’ve tested hundreds of personal VPNs since 2016. Currently, our highest-rated VPNs are:

NOTE: Personal VPNs are typically sold on a subscription basis, with discounts available when you pay upfront for a year or more. There’s also a small number of free VPN services that are safe to use.

While remote access VPNs let you connect to a local network from anywhere, they do assume that the user will stay in one location. If the user disconnects, the IP tunnel closes.

A mobile VPN is a better option than a remote access VPN if the user is unlikely to have a stable connection, on the same network, for the entire session.

With a mobile VPN, the VPN connection persists even if the user switches WiFi or cellular network, loses connectivity, or switches their device off for a while.

NOTE: A mobile VPN can be used with any device and any connection: it doesn’t have to be a mobile phone on a mobile network.

When to Use a Mobile VPN

Mobile VPNs tend to be used to ensure consistent availability for mobile workers, or for the convenience of having a VPN that tolerates connection changes. For example:

NOTE: Many personal VPNs offer mobile versions of their service that you can download onto your cell phone. These are not the same as mobile VPNs. Mobile VPNs are usually a form of business VPN, used by employees to access the company network.

Whereas a remote access VPN is designed to let individual users connect to a network and use its resources, a site-to-site VPN joins together two networks on different sites.

If a company had two offices on the east coast and west coast, for example, a site-to-site VPN could be used to combine them into a single network.

Different technologies can be used to implement a site-to-site VPN. These include IPsec, Dynamic MultiPoint VPN (DMVPN), and L3VPN.

When to Use a Site-to-Site VPN

Depending on who owns the networks being joined, there are generally two different forms of site-to-site VPN:

There are three main ways a site-to-site VPN can be implemented:

An IPsec tunnel can be used to join sites together, in much the same way it connects individuals to a private network within remote access VPNs.

In this case, however, the VPN is implemented by routers at the two or more sites that are connecting to each other. For this reason, it’s sometimes also called a router-to-router VPN.

Whereas a remote access VPN creates a tunnel for one device to connect to the private network, with a site-to-site VPN, the IPsec tunnel encrypts the traffic between the connected networks. This can take two forms:

IPsec tunnels can be built using most firewalls and network routers.

The problem with IPsec tunnels is that IPsec connects two points to each other. In a site-to-site network, for example, IPsec could be used to connect two routers to each other.

That doesn’t scale well in large companies with thousands of sites, where thousands of connections might need to be established.

The network architecture is a hub-and-spoke design, which reflects the fact that most traffic goes between branch sites (spokes) and the main site (hub), rather than between one branch and another.

That said, it’s still possible for branch sites to connect to each other using a DMVPN. It just takes a little additional configuration.

The IPsec and DMVPN approaches both sit on top of the internet, which means they can’t offer consistent or guaranteed performance.

By contrast, Multi-Protocol Label Switched (MPLS) Layer 3-based VPNs can provide a guaranteed quality of service, with global connectivity. This is because MPLS is a way of routing packets across a network via any transport medium (such as fiber, satellite, or microwave) and any protocol.

Service providers can therefore use MPLS to create a Layer 3 VPN. The ‘Layer 3’ refers to the OSI network model, which uses multiple layers to explain how communications are converted between electrical, radio, or optical signals into application data. Layer 3 means the VPN is created in what’s called the ‘network layer’.

While some large companies might set up their own MPLS VPNs, they’re usually created by communications service providers.

The service provider can create a separate virtual network for each customer, which it resells as a wide area network (WAN). The virtual networks are isolated from each other, even though they may share some of the same physical network resources.

If you buy a WAN service from a communications service provider, it could well be using an MPLS L3VPN, without you necessarily knowing.

With an MPLS VPN, it’s possible to prioritize certain types of high-priority traffic, such as voice traffic, to ensure a better quality of service. The route through the network can be precisely controlled, too, to enable consistent and well-optimized performance.

Private WAN services are expensive, so there’s a trend for companies to decommission MPLS services in favor of cheaper internet-based VPNs. The main exceptions are for situations where any latency is critical – for example, in applications that detect faults and outages in the power grid.

Examples of the different types of site-to-site VPN include:

The four types of VPN outlined here have different applications, making it easy to choose between them.

Remote access and mobile VPNs provide remote access to a private network. They’re ideal for organizations that need to give employees or others out-of-office access to the company network.

Personal VPN services give individual users encrypted access to a third-party server. By routing your traffic through this server, you can protect your identity and hide from surveillance as you browse the open internet.

You can also use a personal VPN service to bypass geo-restrictions on streaming platforms like Netflix, and circumvent firewalls in highly-censored countries like China.

Site-to-site VPNs enable organizations to combine their networks from different locations into a single network called an intranet. You can also use a site-to-site VPN to invite partner companies into your network, which is then known as an extranet.