There are three key methods to setting up a VPN on a router. The easiest way is to buy a pre-configured VPN router. Alternatively, you can manually set up a VPN on specific router types.

Setting up a VPN on your router makes it easy to secure your internet activity on all your household devices.

Running a VPN on your router also avoids having to create a VPN connection on every connected device individually.

But, not all routers support VPN connections and not all VPNs support router installation.

Double-check your router’s manual to see if it supports VPN software. If it does, make sure your chosen VPN service allows for router setup before you buy a subscription.

The three main methods to set up and use a VPN on your home router are:

In order to use a VPN on your router, you’ll need the following:

Every router model and type is different, and it isn’t possible for us to give you a guide for every model here.

However, using this guide in conjunction with your user manual and your VPN service provider’s advice, you should be able to easily install a VPN on your router.

Important: You’ll need to log onto your router to follow this guide. The username and password may be printed on the rear of the router, or on a card that came with it.

The easiest way to use a VPN on your router is to buy a pre-flashed router. They’re not cheap, though.

Pre-flashed routers start at around $130 and high-end models can cost upwards of $500. That doesn’t include the price of the VPN subscription, which can be around $100 a year. 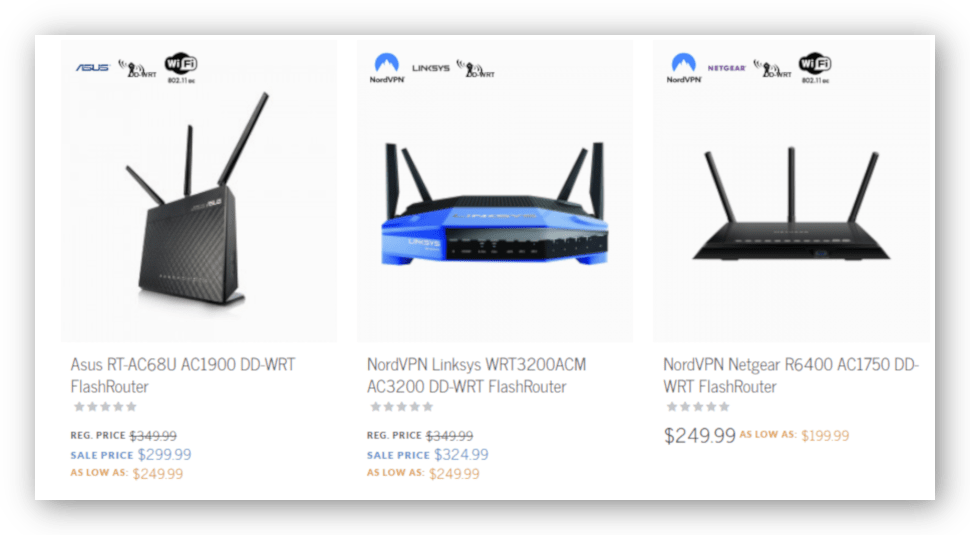 The most popular provider of pre-configured routers is FlashRouters.

Many VPN services offer pre-configured VPN routers through FlashRouters, but here are some popular examples:

Some of them support the FlashRouters Privacy App, while others rely on the default router firmware (DD-WRT, OpenWRT, or Tomato).

If you would like to buy a pre-flashed router it’s worth testing the VPN out on your desktop computer and mobile devices first to see if you are happy with the software in general before you commit to buying a router.

Most VPN services come with money-back guarantees, so if it’s not working out for you you can get a refund. Just make sure the guarantees are ‘no questions asked’.

Once you’ve purchased your pre-flashed router it will arrive configured and ready to protect your internet data.

You can read more about pre-flashed routers in our dedicated guide.

If you’ve purchased a pre-flashed router through FlashRouters, the device will arrive set-up and ready to use.

Once you’ve connected the router to the internet, just visit flashroutersapp.com on a device connected to the router’s network and enter the login details for your VPN subscription. 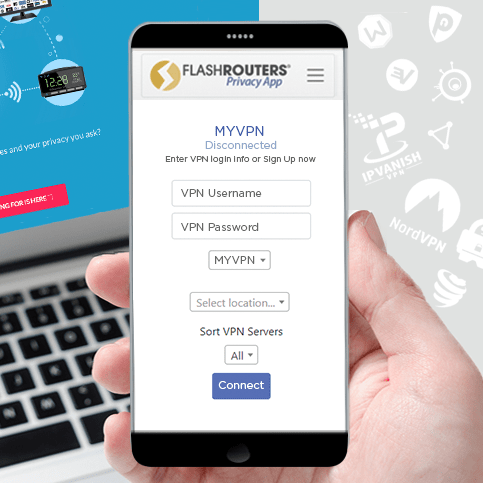 From there you’ll be able to choose a VPN server and connect.

Another easy way to use a VPN on your router is to use a VPN service that has a dedicated VPN router app or applet. We recommend using ExpressVPN.

When you manually configure a router you need to install each server location one-by-one. With a native app you have access to all server locations from the get-go.

Unfortunately, there aren’t many router apps available at the moment, but there are two that stand out.

ExpressVPN’s router applet, and the FlashRouters Privacy App (we’ll talk more about that in Method 3).

You can only use ExpressVPN’s app with an ExpressVPN subscription. 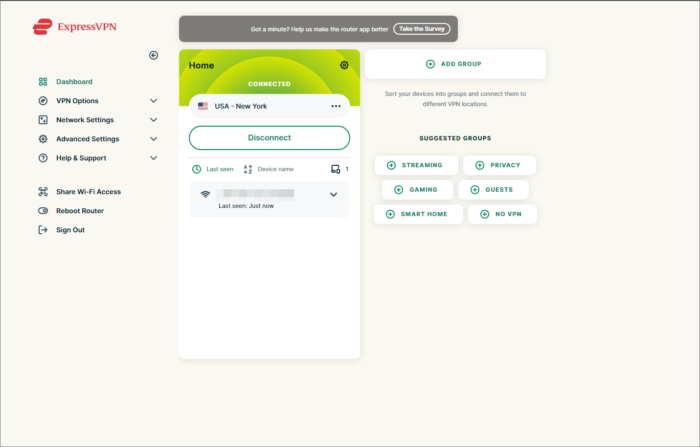 As you can see from the screenshot, ExpressVPN’s router applet is user-friendly and much more intuitive than standard router dashboards.

The app comes with a VPN kill switch and a type of split tunneling (called ‘Per device’), which allows you to exclude certain devices from the VPN.

We’ll be using a Linksys WRT3200ACM for the following setup instructions:

Now all the devices connected to your router will benefit from VPN protection.

ExpressVPN provides a range of guides for setting up its router applet on different router models should yours be different to the one we’ve selected for this guide.

We’ll start by explaining how to manually configure your current router, as you don’t necessarily need to buy new router hardware to do it.

If you’re looking for a ready-made VPN router you can skip to Method 3.

If you have an ASUS router then you may be in luck.

Some ASUS routers support the OpenVPN protocol natively through ASUSWRT firmware, so there’s no need to flash your router with new firmware – something that has a lot of potential to go wrong.

Here’s how to set up a VPN on your ASUSWRT router:

We’ll be using IPVanish with an ASUS RT-AC68U router.

If you don’t have an ASUSWRT router you’ll likely have to flash your current router with new firmware that supports OpenVPN VPN client software. The three main firmwares are:

Important: Do your research before attempting to flash your router with new firmware. Doing so on a device that doesn’t support the firmware could ‘brick’ your router, leaving it useless.

Here’s how to flash your existing router:

(These are very general instructions – read your router’s user manual for specific guidance, as it may require more additional steps than those outlined below.)

Once you’ve flashed your router it’s time to configure your VPN client.

It will be broadly a similar process as we outlined for ASUSWRT. But, you should follow the instructions supplied by your VPN provider to understand how to configure the VPN with your chosen firmware.

For example, here are IPVanish’s instructions for installing the VPN on a DD-WRT router.

While it’s easier to set up and use a VPN on computers and mobile devices, installing a VPN on your router has some unique benefits:

However, there are also some drawbacks to using a VPN on your router.

So, when should you and shouldn’t you use a VPN on your router?

As long as you keep your router switched on, the VPN connection will always be in place to encrypt your home’s internet traffic.

That means that you don’t have to wait for your computer to boot up fully before you benefit from VPN protection.

2Protects all types of internet-enabled devices

You can’t install a VPN directly onto some devices, such as games consoles and smart TVs.

But with a router you can cover all your gadgets that don’t support VPN client software directly.

Most VPN services restrict the number of devices that are running the VPN at any given time (i.e. simultaneous connections).

By installing the VPN at router level you can cover many devices with one single VPN connection.

As you can probably tell from reading this guide, installing a VPN on your home router can be difficult and time consuming.

It’s definitely not for beginners.

Even after you’ve completely set up your router with the VPN client software, it’s not as easy to change the settings as when the VPN software is installed at device-level.

While this should be fine for users who just want to protect their privacy, it’s not as convenient for those who want to use a VPN for content unblocking and streaming.

It’s super easy to switch server locations and settings to accommodate streaming within custom VPN apps for devices like computers and smartphones, but it’s not so simple on routers.

If you’re looking to stream content it might be easier to install the VPN software directly onto your preferred device.

However, some devices like Apple TV don’t currently have VPN apps, so installing the VPN at router-level will be your only option.

2VPN routers can be expensive

If you want to use the best and safest VPN protocols and encryption like OpenVPN with AES-256 you’ll probably need to buy new router hardware, which can cost hundreds of dollars.

And that doesn’t include the price of the VPN subscription itself, which can cost more than $100 a year.

There are some VPN services that aren’t compatible with routers, such as Hotspot Shield and TunnelBear.

Always check if a VPN service supports router connections before you purchase a subscription.

Even if the provider does support router connections it might only support unsafe VPN protocols on router such as PPTP.

4Internet traffic between your devices and the router is not secured

Another downside of using a VPN at router-level is that traffic between devices and the router is not encrypted.

While this isn’t so much of an issue if you trust everyone connected to your home network (and don’t mind them seeing your online activities), it does pose a security risk should a random stranger gain access to your network.

A VPN router encrypts the traffic of every device on your WiFi network.

You should, however, avoid using a VPN on both your device and the router at the same time to avoid slowdowns and instability.

One workaround would be to set up a separate router for devices that don’t come with custom apps like your Xbox or Apple TV. That way you can still use custom VPN apps on your computers and smartphones.

ExpressVPN’s router applet and the FlashRouters Privacy app – which is available for many DD-WRT routers – allows you to exclude certain devices from the VPN tunnel.

How to Choose a VPN-compatible Router

Not all routers can run VPN client software.

If you have a modem and router combo device that came with your internet package, it most likely won’t work with VPN software and you’ll need to buy a separate router.

So, which routers do work with VPNs and which one is the best?

There are many different router models that support VPN client software, and the best router for VPNs is simply the one that best suits your needs.

VPN-supported routers vary in price – they start at around $150 and can go up to $500, so a lot depends on your budget.

Different router models also cater for different users; some are geared towards gamers, while others are for more casual users who just want to protect their router traffic with a VPN.

You must also consider which VPN protocols the router supports, and whether it can be flashed with new firmware.

As we’ve mentioned before, OpenVPN is the best VPN protocol to use on your router.

While it’s generally much easier to use PPTP and L2TP/IPSec, since many routers natively support these two VPN protocols, they pose security risks.

PPTP can be hacked in minutes, and L2TP/IPSec is not safe to use when used with a pre-shared key.

It’s important VPN protocols and their levels of security in our guide to VPN encryption.

There is a difference between using your router as a VPN server and using it as a VPN client.

This setup guide covers setting up your router to use it as a VPN client. When you do this, it routes all of your internet traffic through the VPN encrypted tunnel to the VPN servers on the other end.

On the other hand, setting up your router as a VPN server lets you securely connect to your home network remotely. Internet traffic is encrypted and sent through the VPN tunnel from your device and to the router VPN server in your home.