We are tracking the websites officially blocked in Russia since the invasion of Ukraine in February 2022, including Instagram, Facebook and major news sites. 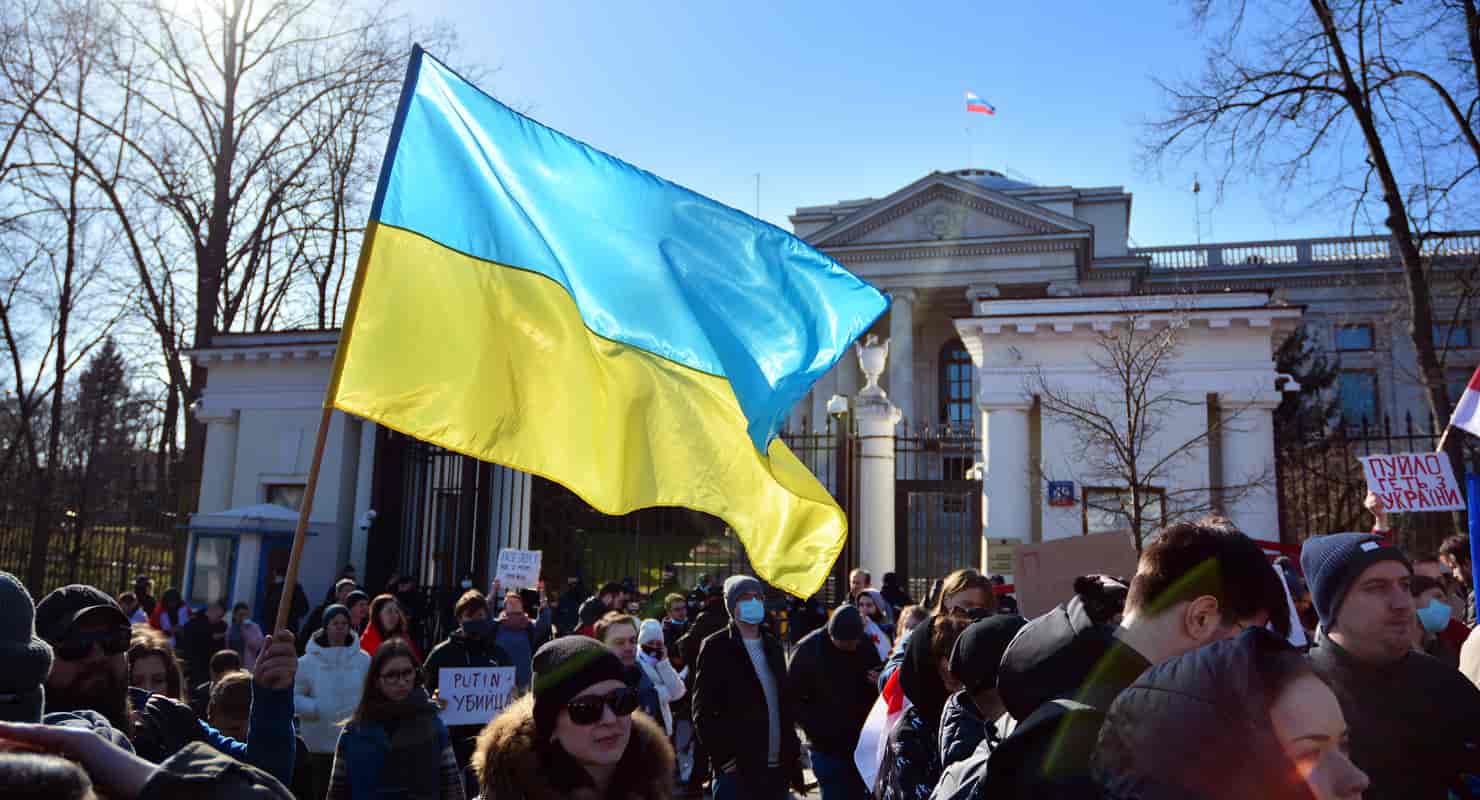 First published Mar 2, 2022. Last updated to incorporate the latest sites blocked in Russia, including the FBI and CIA websites.

Since Russia’s invasion of Ukraine on 24 February 2022, the Kremlin has sought to dramatically restrict the free flow of information online, with the Prosecutor General’s Office ordering local ISPs to block over 25,000 websites.

ISPs have adopted various techniques to block content in the country, including HTTP man-in-the-middle interference and DNS manipulation, with varying degrees of success.

The most common approach has been DNS based filtering and RST packet injection during TLS handshakes, according to The Open Observatory of Network Interference (OONI).[1] While officials often only identify a specific URL for blocking, the mechanisms used to restrict access by ISPs frequently mean the entire domain is rendered inaccessible.

Many of the websites identified for blocking since February 2022 are unrelated to the war, including gambling and adult websites. However, our analysis of blocked domains reveals a significant number were restricted because of content directly related to the conflict.

The banned sites are accessible via an online database maintained by the Russian NGO, Roskomsvoboda, at reestr.rublacklist.net.

From large international public broadcasters, such as the BBC, to local independent news outlets, almost 3,000 websites have been blocked since February. Social media websites, including Facebook and Instagram, have also been affected, alongside a huge variety of smaller websites.

The restrictions have had significant economic repercussions for the country, with the social media blocks costing the economy almost $16 billion according to our estimates.

As a result of the widespread blocks, Russians are turning in increasing numbers to VPN services, despite official restrictions on their use in the country. Daily demand for VPNs has skyrocketed to over 2,000% higher than before February 24.

VPN access remains a sensitive issue in Russia. Use of the software is permitted but accessing blocked content is illegal. With 15 VPN services currently officially banned for not complying with government demands, it can be difficult to find a trustworthy VPN that still works in Russia.

This research documents the websites blocked in Russia related to the invasion and aims to shed light on the country’s evolving censorship practices.

We will continue to analyze the sites being blocked in Russia and update this page on a regular basis.

The following table shows the 30 biggest domains by internet traffic added to Russia’s internet denylist since 24 February 2022 that relate to the Ukraine invasion, along with their locale and type of website. See the full list of blocked domains.

Jump to table showing top 10 countries by number of domains blocked by Russia since 24 February 2022.

The following table shows a breakdown of the internet domains of news websites blocked by Russia since 24 February 2022.

“Mirror domains” refers to alternative domains spun up in a bid to allow continued access to blocked new services. Websites with multiple potential categories have been classified according to their primary characteristic.

Russia has blocked more news services by far than any other type of domain. Almost 85% of the domains blocked since February 2022 that relate to the conflict are those of news websites.

A significant portion of these blocks have been of mirror domains with generic or semi-generic names, such as d1q41g9t686yni.cloudfront.net and svobobzlebokntcgs.azureedge.net.

This is largely a result of the ongoing cat-and-mouse game between Russian censors and the US-funded Radio Liberty/Radio Free Europe (RL/RFE) group of websites, whose main domains were among the first to be blocked in the censorship crackdown.

These mirror domains are spun up quickly and circulated on social media to provide continued access to RL/RFE websites such as radiosvoboda.org and sibreal.org that serve Ukraine, Russia and the Caucasus region. As quickly as Roskomnadzor can block these alternative versions, new mirror domains spring up to replace them, with those blocked typically then taken offline.

Other news sites, such as Mediazona and the BBC, have since adopted a similar strategy.

While this phenomenon has greatly inflated the number of news domains, 1,018 other news domains have been blocked. Russia has taken an extreme, scorched earth approach to censoring internet news of the war, blocking everthing from tiny local blogs to major international broadcasters.

Roskomnadzor has also heavily censored local news from Ukraine, and to a lesser extent from Russia. Prominent banned websites include poltava.to, which has over 600,000 monthly visitors, despite the majority of its content covering mundane local issues in the central Ukrainian city of Poltava, such as traffic and the activities of the local council.

Other major banned websites include Melitopol local news website ria-m.tv, which has around 1.2 million monthly visitors, whose coverage of the war is much more prominent and defiant in tone.

The Russian authorities have also clamped down on Russian news websites, with independent media like Meduza.io hardest hit. In total we found 50 Russian independent news websites to have been blocked since February.

Note that we classified independent news websites as primarily journalist-driven, as opposed to the more commercial advertising-focused news websites that typically source much of their content from third-party sources.

Outside of Ukraine, Russia and the U.S., the countries with the most news websites blocked by the Kremlin have been:

Other notable trends include the censorship of 12 sports domains and two chess websites for hosting content critical of Russia.

The following table provides a breakdown of websites blocked in Russia that we have classified as contributing to Ukraine’s digital war effort.

A key element of what we have dubbed the “digital resistance” to Russia’s invasion of Ukraine, and which Roskomnadzor has blocked with gusto, is site hijacking. This is where hackers have targeted low-quality vulnerable websites, seized control and replaced the content with some form of counter-propaganda.

We found 255 blocked domains where the website content has been replaced. More than 30 of these were Russian domains, whose content had all been replaced with the same simple one page website with the following message:

The name of the Telegram channel rf200_now is very similar to Ukraine government-operated counter-propaganda website 200rf.com, also blocked, which suggests state actors could be behind the hijacking.

The most frequently blocked hijacked websites (over 200 to date) also appear to be the work of Ukrainian state actors, who have seized and replaced the content of Russian registered websites on the .ua top-level domain with the following message:

Blocked Russian-registered website on .ua top-level domains that have been hijacked, purportedly by Ukraine state actors.

The Russian authorities have also blocked 122 websites dedicated to countering the domestic propaganda that seeks to frame the invasion as a justified act.

These websites range from impassioned calls for peace to graphic photographs of charred and mutilated corpses of Ukrainian civilians and Russian troops. While the majority of these websites originate from the Ukraine, 35 are Russian in origin.

Roskomnadzor has also censored a growing handful of websites promoting even more overt Russian dissidence. ostanovivagony.info, for example, provides explicit instructions on how to sabotage railway lines to disrupt supply lines between regional Russia and the front line.

Russia has also blocked several Ukrainian websites aiming to drum up grassroots digital resistance through DDoS attacks on hostile Russian websites, such as the Ukraine government-supported help-ukraine-win.com.ua website, which provides step-by-step instructions and tools for ordinary people to launch such attacks from their personal devices.

Simply showing any kind of support for Ukraine is also enough to draw the attention of Russia’s internet censors, with 62 websites blocked for even the smallest public indicators of support, such as the simple banner below.

Screenshot of video game website blocked in Russia for featuring a message of support for Ukraine.

The following table provides a summary by content type of the domains added to Russia’s internet denylist since Feb 24 that relate to the Ukraine invasion.

Countries With Most Blocked Domains

The following table lists the 10 countries host to the highest number of domains added to Russia’s internet denylist since 24 February 2022 that relate to the Ukraine invasion. Domains were considered to be associated with a country based on their top-level domains or, where known, the physical location of operations.

Note: 2,415 domains originating in the United States are mirror domains for blocked Radio Liberty/Radio Free Europe and Voice of America domains. Other mirror domains are included in the totals for Russia (118), Ukraine (17), UK (13) and Belarus (2)

In this ongoing tracking project, we regularly review all entries on reestr.rublacklist.net from 24 February 2022 and filter for domains relevant to the invasion of Ukraine. We exclude all content that is otherwise routinely blocked in Russia, such as unlicensed gambling or financial scam sites.

The relevant content was then manually reviewed and categorized by site type. Locale was derived from the top-level domain where possible, otherwise it was based on the physical location of the operator of the domain.

“Mirror domains” refers to alternative domains spun up in a bid to allow continued access to blocked new services. Websites with multiple potential categories have been classified according to their primary characteristic.