TurboVPN is an unsafe free VPN for iOS and Android. It's riddled with invasive third-party advertising and it logs connection data. We also detected DNS leaks, unsafe permissions, and malware. Using TurboVPN poses a serious risk to your privacy and security.

Turbo VPN has been downloaded by a staggering 300 million users around the world. But does popularity equate to quality?

Unfortunately, the answer is no. Turbo VPN is one of the worst VPNs we’ve tested, and it poses many risks to its users.

In this Turbo VPN review we will bring to your attention all the concerning issues we’ve identified. We’ll also answer other product-related questions such as:

Keep reading our Turbo VPN review to understand exactly why we strongly recommend you don’t use this VPN under no circumstances.

For safer and unlimited VPN use, we suggest an inexpensive VPN like Surfshark. With fast speeds, strong security, and a 30-day refund guarantee, we highly recommend it over Turbo VPN.

Try Surfshark for 30 days or read our latest Surfshark review.

Before delving into our Turbo VPN review, below is a quick overview of the service’s advantages and disadvantages.

We test and review every VPN in seven key areas. Here’s how Turbo VPN performs in each category:

When we first reviewed Turbo VPN, it had one of the worst privacy policies that we’ve seen.

Since we contacted Turbo VPN asking questions and pointing this out, we’ve noticed that it has completely overhauled its privacy policy.

Even so, the new privacy policy is still not great. It’s confusing, poorly written, but it at least lists the amount of data it collects.

Turbo VPN may not collect your ISP or IP address, but it does collect this:

The fact that it then calls itself a “no-logs” VPN goes to show the extent to which the term is so freely and wrongly used.

The minimal information allows us to provide efficient technical support to you.

But we know you can run a great VPN with far less information collected.

It’s obvious this VPN company doesn’t want you to read its privacy policy. It’s hard to read (the default font size is extremely small), and the information within is awful.

More than that, your data appears to be readily available for the Chinese Communist Party, plus whatever private interests and third-parties it’s also sharing it with.

Luckily, we are here to call it out and clearly warn you: avoid Turbo VPN.

It’s incorporated at 38 Beach Road #29-11 South Beach Tower, Singapore. Singapore is a nation of intrusive surveillance, government snooping, and has links with the Five Eyes — a US-led intelligence sharing network.

The director of Innovative Connecting is a Chinese national and entrepreneur by the name of Danian Chen, who is also the CEO of LinkSure — the company behind ‘WiFi Master Key.’

Once described by Forbes as “one of the most influential young leaders in China,” Danian Chen is listed only in corporate filings and has no public association with the company.

The fact that Turbo VPN is owned by a Chinese national, and the service’s privacy policy states it will hand over your personal information to legal authorities ‘if ordered by a court of competent jurisdiction’ is highly problematic.

Unless you want to risk your data being sent to China, we advise you not to use Turbo VPN.

Turbo VPN recorded mediocre results in our speed tests. Download speeds were below-par connecting to a nearby server, but dropped massively connecting to international server locations.

Overall, Turbo VPN’s speeds may be acceptable for casual use, but they are far too inconsistent for more regular use of the service.

Below are the results of our speed tests:

When connected to Turbo VPN:

Our download speed loss when Turbo VPN is running: 36%

These speeds are hit-and-miss, if slightly mediocre.

Turbo VPN didn’t fair much better connecting to further away server locations. Below are the results of our long-distance speed tests:

The VPN recorded some outright bad speeds, particularly connecting as far as Singapore. We recorded a 97% speed loss, which is one of the worst recordings we’ve ever seen.

It’s also the case that Turbo VPN is, unfortunately, wildly consistent. This is an issue backed up by many user reviews.

Turbo VPN claims to not put any caps on bandwidth or data usage, but it does operate a ‘fair usage’ policy.

If our experience is anything to go by, running a few speed tests seems to surpass what it considers to be fair, resulting in a steep drop in performance.

It claims to have 10,000+ servers both on its website and in an email with us.

That seems very unlikely. Even if it was true, it’s reserved for premium users.

For the free users out there, you get a choice of seven countries. These are: 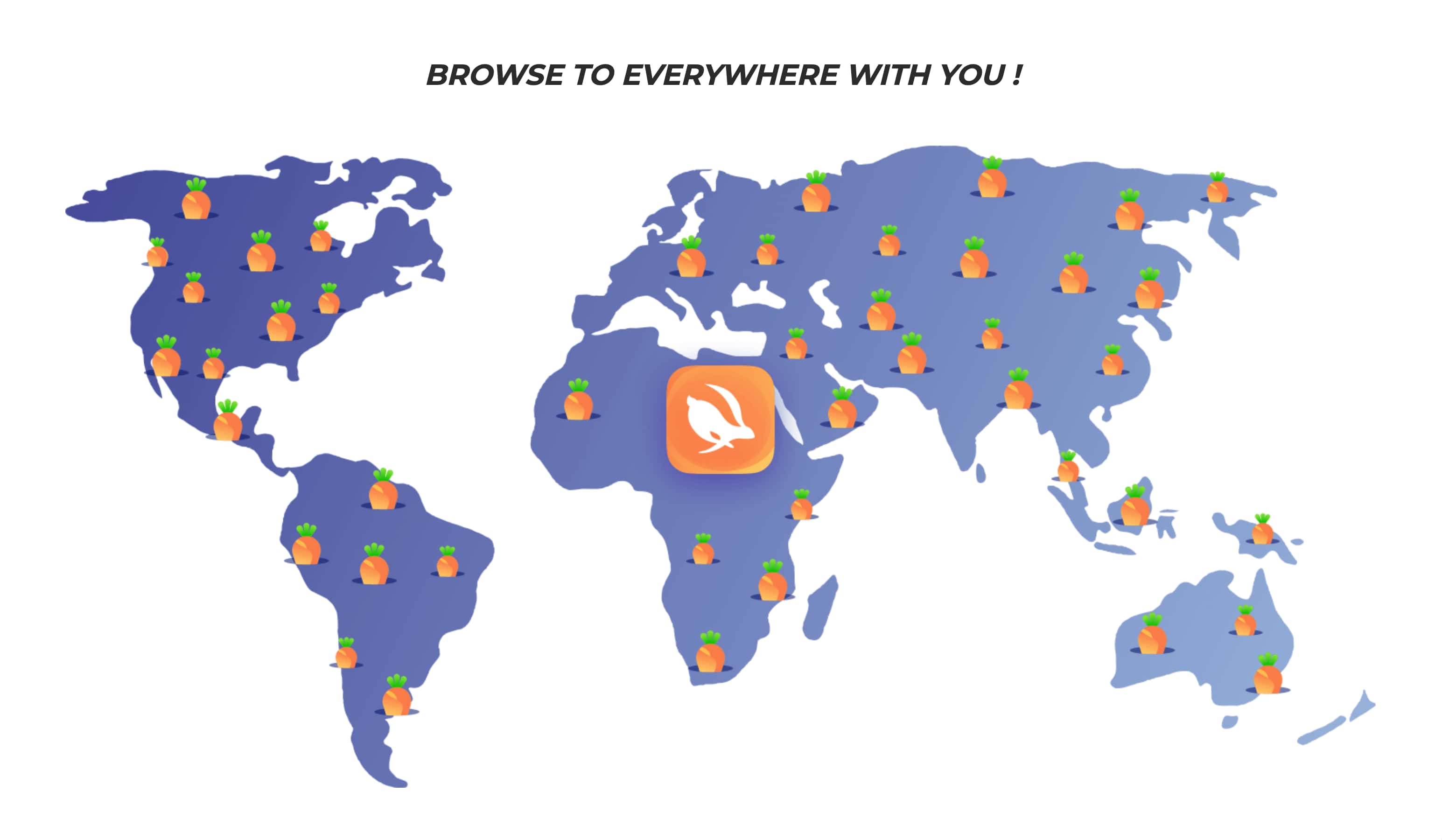 Only the US has a city-level choice — New York and San Francisco on each coast.

This is by no means the coast-to-coast coverage offered by many top-tier providers, but being able to select East or West Coast depending on your true location goes some way to improving performance.

The Asia-Pacific is represented by India and Singapore only, and users in South America and Africa will be disappointed to find no servers whatsoever.

If you’ll mainly be connecting from these regions, you’re better off choosing another provider that has a larger, more diverse server list, like TunnelBear Free.

A bad choice for streaming

Turbo VPN is a bad choice for streaming.

On both of its US servers we failed to access Netflix.

Some users have claimed to be able to access the site, but only through premium VIP servers, leaving free users high and dry.

To our surprise, it did unblock BBC iPlayer.

How long this will last, we can’t say, but it’s a positive for now.

The BBC has cracked down on VPN providers, so it’s likely that Turbo VPN’s only UK server will fall victim to this soon.

We really couldn’t recommend Turbo VPN for torrenting or P2P activity due to its serious lack of privacy features and intrusive logging policy.

Turbo VPN also states clearly in its FAQs that users should not access BitTorrent while connected or their account may be blocked.

Turbo VPN makes it quite clear that the app can’t be used in China. This is for ‘policy’ reasons.

The country has cracked down on VPN providers, rendering most VPNs useless when used to connect out from the country.

Turbo VPN is available on Android and iOS devices.

There are, however, no manual workarounds for any other platforms.

If you want Turbo VPN on any other device, you have to find another VPN service.

It’s also available with Turbo VPN Premium, which removes ads, has a ‘faster  connection’, and links up to 5 devices. You can sign-up for a 7-day free trial.

It’s not likely that you’ll find a VPN quite as unsafe as Turbo VPN.

As part of our free VPN investigation, we detected unsafe functions, DNS leaks and virus/malware on the app.

This goes against everything a VPN is supposed to do and what it represents.

On the positive side, it claims to offer OpenVPN as its default protocol, which is our preferred choice.

But you can’t see this from the app itself, so we can’t guarantee it is speaking the truth here.

They confirmed it in an email, but also told us they use IPSec. Considering that you cannot change your protocol, we can’t say which you’re using on any given server.

Other than that, there’s nothing else to speak of in terms of Turbo VPN’s security and encryption methods.

There’s not even a kill switch — an essential privacy feature that blocks internet traffic should the VPN connection drop.

Your personal data is not secure, with Turbo VPN not even maintaining its own DNS servers, which means that your web traffic is routed through third-party servers even when you’re connected to the VPN.

How to Install & Set Up Turbo VPN

Turbo VPN is super-easy to install and very simple to use.

It’s a smooth, modern-looking app with a pleasing hare-theme design.

The animation is fun, but don’t be distracted; remember that this is a potentially compromising app.

There are plenty of ads to bother you, but that’s often the sole source of funding for a free VPN.

Turbo VPN’s personalization options in the settings menu are limited solely to choosing whether or not the app connects on startup.

There’s nothing wrong with the design and usability of Turbo VPN—it’s all very intuitive—but that hardly makes up for its gaping privacy and security flaws.

Turbo VPN claims ‘seamless’ 24/7 customer service, but our experience was far from that.

We sent an email to the address provided on the Google Play Store, but got no response.

The website was no use either — it includes some very generic information about being the ‘fastest’, ‘easiest’ and ‘most stable’ VPN on the market, but lacks any technical information to back that up.

It also doesn’t provide any setup guides or troubleshooting tips.

The app does include an FAQs page but it’s very basic and won’t solve the majority of issues.

If you have a question or issue with the app, don’t expect many answers.

We do not recommend Turbo VPN under any circumstances. It’s unreliable, insecure, and dangerous.

Though you may be able to stream BBC iPlayer, this is simply not worth the trade-off in terms of privacy, security, and performance.

We recommend another VPN (almost any other VPN, in fact), but especially these:

Windscribe is our top-rated free VPN. Unlike Turbo VPN, it's got reliable download speeds, a good selection of servers and, most importantly, a strong privacy policy. Read Windscribe review

Surfshark is a premium VPN but it comes at a budget price of $2.49 a month. It's a good streaming VPN with fast speeds and several configurable settings TurboVPN can only dream of. Read Surfshark review