Many VPN companies ignore Linux users, and haven’t developed native VPN Linux clients. We’ve tested and reviewed 56 VPN services to see which ones did, and how well they work on Linux.

Each VPN we recommend comes with a full GUI (graphical user interface), removing the need for a Terminal command line or complex configuration files.

Our tests confirm that the best free and premium native Linux VPNs are:

The VPNs in this guide all offer a native Linux application, which requires very little configuration and offers way more features.

Nevertheless, if you still want to manually set up OpenVPN, we have a dedicated section explaining how to install OpenVPN on Linux.

Comparison of the Best VPNs for Linux

Use the table below to compare the top Linux VPNs for the most important criteria for Linux:

The top Linux VPNs are compatible with a wide range of distributions, including Ubuntu, Fedora, Arch, Mint, and more. They also have applications for all other major platforms.

In the table below we compare how the best Linux VPNs performed in our most important testing categories:

Here are some of our key Linux VPN testing statistics:

The Best Free VPN for Linux

While the premium version of Proton VPN is one of our very highest-rated Linux VPNs, the service also has an excellent free version.

In fact, based on our testing criteria, Proton VPN Free is the best free VPN for Linux.

The service’s free VPN software is highly secure and compatible with all major Linux distributions.

Setup and compatibility for the free version of Proton VPN is exactly the same as the paid version. You can install it on all of the following Linux distros:

Perhaps most importantly, Proton VPN has no data usage cap. This is extremely uncommon for a free VPN, and lets you use the free VPN without data limits.

However, as you can read in our Proton VPN Free review, the VPN has a number of limitations to consider.

While its very fast, the free VPN has servers in only three countries, it prohibits torrent traffic, and it doesn’t unblock popular streaming services.

Do Other VPNs Support Linux?

Almost every reputable VPN will support Linux, often with Linux-specific setup instructions on their website. Some of these VPNs include:

However, what separates these VPNs to the ones we recommend in this guide is that they do not offer GUIs for Linux.

A GUI, or Graphical User Interface, is what makes an app look like an app. Without one, you have no easy, visually-simple way to interact with a program installed on your device.

VPN clients without a GUI are almost unheard of on operating systems like Windows and macOS, but they’re extremely common on Linux.

So what does a program with no GUI look like? It uses CLI instead – the Command Line Interface. That’s what you see when you open the Terminal on a Linux machine. Rows of plain text on a plain background, with special commands required to perform certain actions. 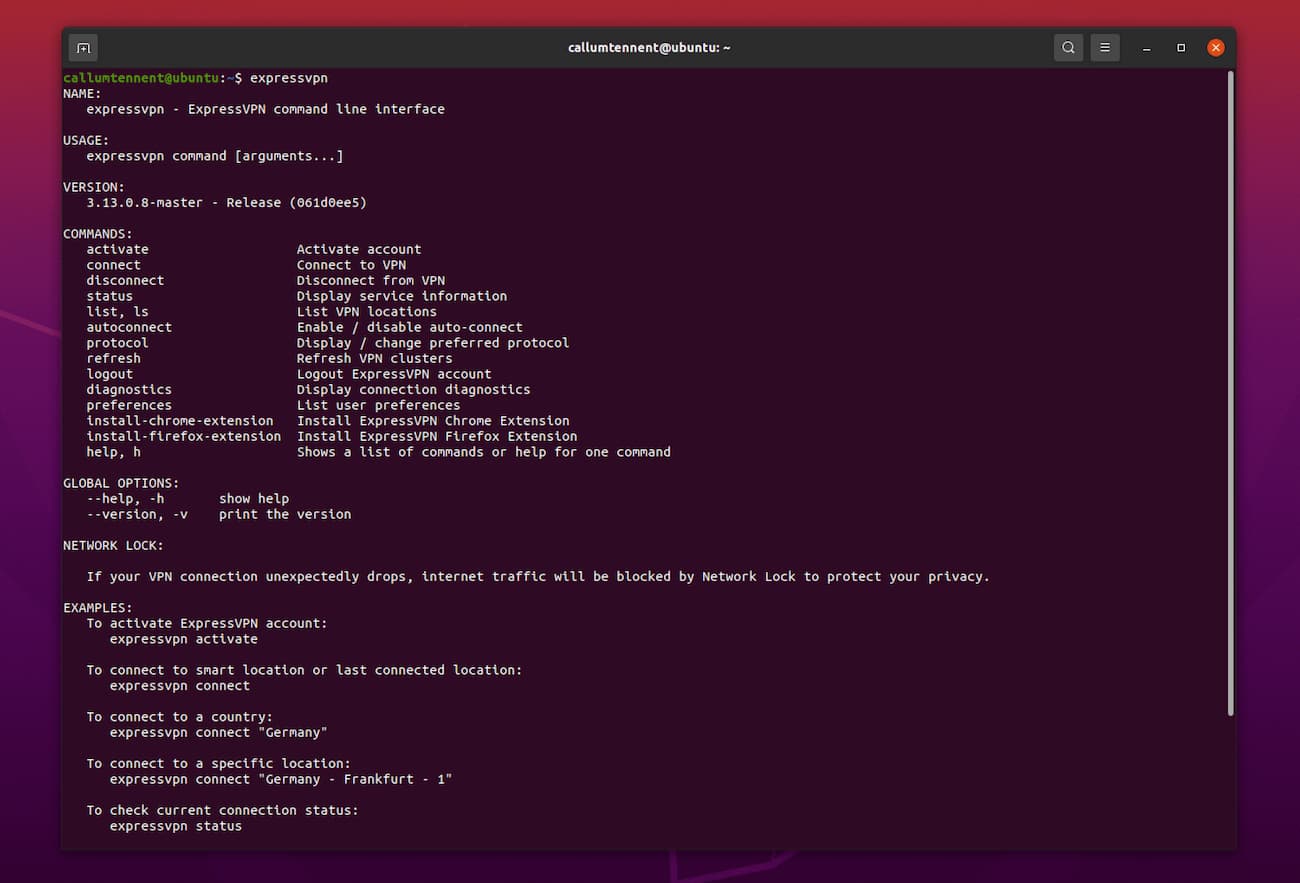 ExpressVPN only offers a CLI for Linux – it’s much less accessible than a full GUI.

That makes changing servers and switching extra features on and off a much longer and more technical process than it needs to be.

How We Test VPNs for Linux

There are a number of bespoke criteria we consider when ranking the best VPNs for Linux.

For Linux specifically, we test for:

Here’s a full list of the factors we look for when testing the best VPNs for Linux, along with how much of the overall rating they account for:

Minimum Requirement: Has a full-GUI app available for Linux.
We Recommend: An intuitive program that is easy to use and resembles its Windows counterpart as closely as possible.

Most VPNs don’t support Linux at all. Of the small number that do, even fewer actually maintain a proper Linux application.

Those VPNs will be content with offering a basic CLI (Command Line Interface) setup that’s unintuitive and slow to use.

Every VPN featured in this list has a Linux application with a full GUI (Graphical User Interface). This means that it looks and operates just like a VPN client on Windows or macOS.

This is the main criterion we use when rating VPNs for Linux. It should be easy to install (with minimal CLI work required), and simple to use.

The closer the VPN app is to its Windows or macOS counterpart, both for usability and features, the higher the score. All of the VPNs on this page treat Linux users with proper respect, delivering high-quality bespoke applications.

Minimum Requirement: Has a 64-bit Debian installer available.
We Recommend: Has installers for as many distros as possible, including Ubuntu, Fedora, and Arch, in 32-bit and 64-bit versions.

While the vast majority of the Linux market may use Debian or Ubuntu, there’s still millions of users on other Linux operating systems.

It’s important for VPN providers to cater to all of the most popular distributions. That means not just Debian variants, but Fedora/RedHat and Arch/Manjaro, too.

We also consider app architecture. There’s a good chance your PC runs the 64-bit version of Linux, but if you’re a 32-bit user we also make sure there’s a VPN that supports your build.

Minimum Requirement: OpenVPN and AES-128 encryption.
We Recommend: A selection of protocols (including WireGuard), plus AES-256 encryption.

Regardless of your chosen operating system, a secure and properly encrypted VPN is always important.

Linux is compatible with all popular mainstream VPN protocols, so the ideal Linux VPN will give you a choice within the app.

The minimum we look for is OpenVPN – the most popular protocol on the market and one we believe to strike the perfect balance between speed and security. WireGuard and IKEv2 are also popular on Linux – both are excellent choices.

Every VPN featured on this page also offers encryption via AES-128, AES-256, or a choice between the two. It’s virtually unbreakable, meaning all your VPN traffic is protected.

This is one area where making sure you have a proper VPN app for Linux makes a big difference.

The best Linux VPNs have a broad suite of extra features – just like their counterparts on more popular desktop operating systems.

A VPN kill switch is the very least we expect. Without one your internet connection and IP address could be left exposed should the VPN connection cut out at any time.

We look for more advanced features, too. Some VPNs offer privacy extras like built-in ad and tracker blocking. Others may have port forwarding to help you torrent faster.

Minimum Requirement: Minimal logs retained.
We Recommend: No personal information logged, with other data deleted promptly, from a company in a privacy-friendly jurisdiction.

Without a VPN your ISP can see every website you visit and every file you download. But with a bad VPN, all you’re doing is handing that information over to a different company instead.

The least we expect of any VPN is to not keep any logs that can tie your browsing activity back to you. It’s imperative that, in the event of a server breach of seizure, any information stored is completely anonymous.

The very best VPNs store no data whatsoever, although this is rare. A good number of them keep no more than aggregated metadata – general server usage statistics which are an anonymized combination of data from a large number of users.

Jurisdiction matters, too. Ideally your VPN of choice will be based in a privacy-friendly country. That means nowhere that’s a part of the Five, Nine, or Fourteen Eyes, or the EU.

A VPN will always impact your internet speeds, but the very best will do so by as little as possible.

Upload speeds are important for file sharing, and ping matter for gaming, but our main focus is on download speeds.

When connected to a server in the same country as you (or a foreign city close by) the speed drop should be practically unnoticeable as you browse the internet like usual.

Top-tier VPNs will also give you great speeds on long-distance connections. This can allow you to unblock region-exclusive websites or services as if you were in the country they’re based in.

How to Set Up OpenVPN on Linux

Every VPN we’ve featured in this list uses multiple protocols and a dedicated app for Linux to make the VPN setup and connection process as simple as possible.

However, it’s also possible to create a VPN connection on your Linux machine using nothing more than the Network Manager – Linux’s own built-in networking capabilities.

It’s free, and setup is relatively simple. However, you will need to provide OpenVPN config files for yourself. It’s these config files that allow you to connect to various server locations around the world.

The safest way to get OpenVPN config files is via a premium subscription to a VPN service (almost every provider offers them). There are free ones available online, but there’s no guarantee that they will be secure or private.

These instructions are based on the steps required for Ubuntu users, but they should largely apply for most other distros.

To manually set up OpenVPN on Linux:

We cover off this approach, plus other alternatives, in our guide to how to set up your own VPN at home.