There are excellent free and paid VPN choices for the Microsoft Windows operating system.

The best VPNs have applications for all popular platforms, but their software for Windows PC is often the most effective and fully-featured.

Based on our speed, security and streaming tests, the best free and paid VPNs for Windows PC are:

All the VPNs we recommend hide your IP address and secure your WiFi network connection on family PC desktops, personal laptops, and home office computers.

The very best ones, like ExpressVPN and NordVPN, also unblock popular streaming platforms like Netflix, HBO Max, DAZN and more.

Microsoft is working to address this issue with its next Windows 11 update.

If you’re a Linux PC user then you can find our list of the best full-GUI VPNs for Linux here.

We’ve spent thousands of hours testing and reviewing VPNs for Windows using our unbiased review process to recommend the most suitable VPN software for PC.

Here is an overview of the main Windows PC VPN testing statistics:

Comparison of the 10 Best VPNs for PC

Use the table below to compare the top 10 VPN clients for Windows based on compatibility, logging policy, speeds, and more:

The table below compares the top five Windows VPN services in the most important testing categories:

Are Free VPNs for Windows Safe?

If you’re searching for a VPN for Windows 10, you could be tempted to search the Microsoft Store to see what’s popular. The screenshot below shows what comes up when you do that. 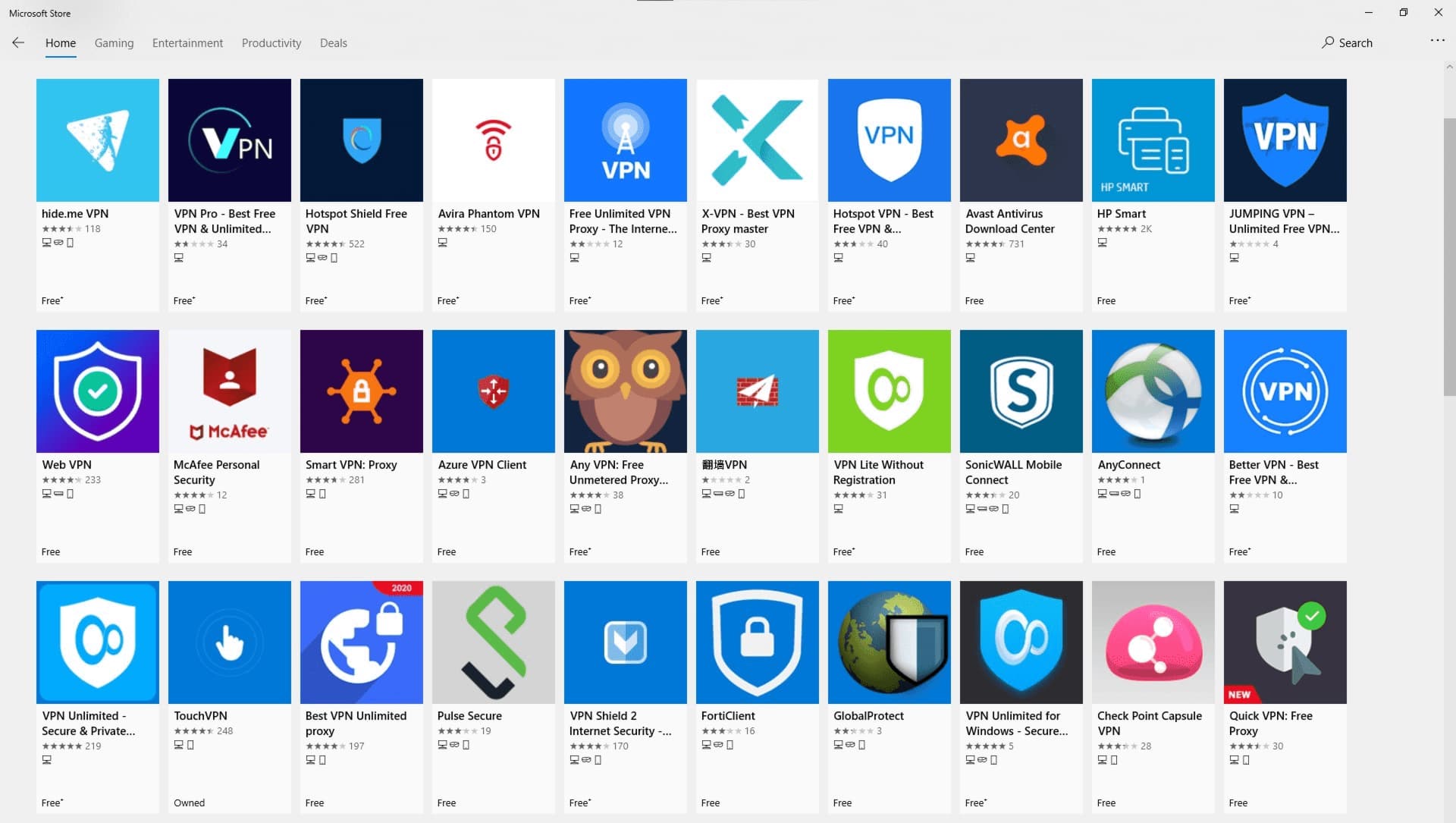 With a few trustworthy exceptions, you should avoid almost all of the VPNs in the screenshot above.

We constantly discuss how few good free VPNs there are, and it’s the same for Windows as any other operating system.

Some free VPNs will be harmless, but a nightmare to use – slow speeds, lack of server choice, daily data caps, and more. But at worst, some will log everything you do online.

In addition to ProtonVPN Free, there are a small number of free VPNs that are 100% safe, trustworthy, and performed well in our tests. See the ones we rate highly in our list of the best free VPNs.

Free VPNs to Avoid On Windows

It’s not just no-name VPNs that can be unsafe. There’s a number of popular, well-known VPNs you should stay away from.

Here’s two of the biggest names you should not trust:

Hola Free VPN has been downloaded by millions of users around the world, but the fact is that you should never download it.

In reality, Hola isn’t a proper VPN. Rather than providing its users with a network of secure and anonymous servers, Hola instead treats its users like servers.

Whenever you connect to an IP address using Hola, you’re actually using the IP address of another user.

This goes both ways of course, meaning that thousands of Hola users could be using your IP address to do whatever they want online.

What’s more, Hola’s parent company can also sell any ‘spare’ bandwidth from your connection to anyone willing to pay for it.

Hola is not a real VPN, and it is not safe – avoid it at all costs.

One of the most downloaded apps on the Google Play Store, Turbo VPN is also available on Windows. You should not download it.

Our independent investigation into free VPN ownership revealed some troubling information about the ownership of Turbo VPN and its siblings.

While it tries to remain suspiciously anonymous, Turbo VPN is actually linked to a family of corporations with no background in privacy, and worrying ties to mainland China.

You shouldn’t trust Turbo VPN with your personal data, as there are no guarantees as to what is being done with it.

The free version of Turbo VPN also has intrusive advertising and invasive trackers. Use a proven free VPN instead.

How to Set Up a VPN on PC

Installing a VPN on Windows is quick and easy, even if you’re someone who’s bad with technology.

While there are a few ways you can approach it, we recommend simply downloading from the official website of the VPN service of your choice. In this example we’ll use NordVPN.

While these instructions are tailored for NordVPN, the process will be similar for most VPNs on PC.

There are other ways you can install a VPN on Windows, although they’re a lot more complex. If you’re curious, take a look at our guide explaining how to set up a VPN on PC.

How We Test VPNs for Windows PC

When recommending Windows VPNs, we focus specifically on attributes and features that are most relevant to Windows users.

For Windows VPNs we specifically consider:

In this section, we’ll go into more detail on how we test all of those categories, and how they affect the overall rating for Windows:

Minimum Requirement: Easy to navigate, with essential features like the VPN kill switch.
We Recommend: The above, plus clear labelling, helpful shortcuts, and in-app FAQs.

As a Windows user, you’re lucky – Microsoft’s PC operating system is the number one priority for most VPN services when designing an app.

Ordinarily, Windows VPNs will be the best-designed version of the app, with the best range of features.

Of course, that’s not always the case, which is why we mark harshly here. A kill switch is the bare minimum. Ideally there will also be split tunneling, customizable server lists, auto-connect, and even port forwarding.

We also greatly favor VPN apps which clearly explain the features present, ideally with good labeling and in-app FAQs. Users with absolutely no experience of VPNs should be able to use it with confidence.

Minimum Requirement: AES-256 encryption combined with the OpenVPN protocol.
We Recommend: The above, plus a choice of protocols and private DNS servers.

A secure, reliable connection is always one of the most important factors for a VPN, but it’s especially important on your PC or laptop.

OpenVPN is a reliable, open-source protocol that has been popular for years. WireGuard is a new protocol which is being used more often – it’s extremely fast, while also maintaining the same security standards as OpenVPN. We test for both of these protocols in every Windows VPN.

AES-256 encryption is also expected from the top VPNs. If you find a VPN which only offers AES-128, it’s still perfectly safe, but it’s not the strongest available.

We consider all of these factors when awarding ratings in this category.

Equally as important as the encryption used is the logging policy of the VPN itself.

Using a VPN is pointless if the service logs private, revealing information like timestamps and URLs visited.

The ideal VPN won’t log any information whatsoever, with everything deleted as soon as your session ends. These VPNs are rare, but they do exist.

More realistically, the top Windows VPNs maintain anonymous, aggregated usage data. This might be something like the total amount of data you use in a month, how many times you connect, or the total number of users connected to a server at once.

We also place great importance on third-party auditing. This is where an external legal agency verifies the claims of a VPN’s logging policy. Conducting these on a regular basis is a huge sign of trustworthiness for a VPN.

We conduct two different types of speed tests to determine the fastest VPNs for PCs.

We perform manual speed tests on a weekly basis, while our automated speed test tool runs 126 tests every six hours to keep a log of VPN speeds across the world.

The best VPNs are between 5% and 20% slower on local connections, but anything less than 40% is acceptable.

We typically expect to see greater slowdown on international connections. The further your desired server, the greater the slowdown will be.

Speed losses of less than 40% on a connection that’s 400-800 miles away from you is very respectable.

The very least we expect of a VPN is to consistently stream US Netflix (or UK Netflix if you’re based in the US). These two libraries have the most varied and popular content.

We have subscriptions to all these streaming services, and perform regular tests to determine which Windows VPNs can unblock them.

Some VPNs offer specialized streaming servers, designed to stream a particular platform more easily. While these servers are useful, we prefer VPNs that give streaming access on any server.

Minimum Requirement: Permits P2P activity on a wide choice of servers.
We Recommend: Permits torrenting on all servers, with good P2P bitrate.

Torrenting is very popular on PC, and it’s crucial you can trust your VPN to hide your torrent IP address.

The trouble is, not every VPN supports torrenting. We test ever VPN for a wide selection of servers compatible with P2P traffic. They should be well-distributed geographically, too.

The top-rated Windows VPNs allow torrenting on every server. We check both marked and unmarked servers don’t throttle or restrict your bandwidth while you torrent.

We test using qBitTorrent, and download a series of large files when testing to make sure that bitrates are good.

While rare, port forwarding is an important bonus for a torrenting VPN. Being able to open specific ports within the VPN can lead to big increases in download speed.

Does Windows 10 Have a Built-In VPN?

Windows 10 does not have a built-in VPN. However, it does let you manually set up a VPN connection without downloading any extra software.

To do this, you still need a subscription to a VPN service.

To manually set up a VPN on Windows, navigate to the Windows search bar and type in ‘VPN settings‘. In the next window, click Add a VPN connection. From here you can then add a custom configuration from the VPN you are subscribed to. 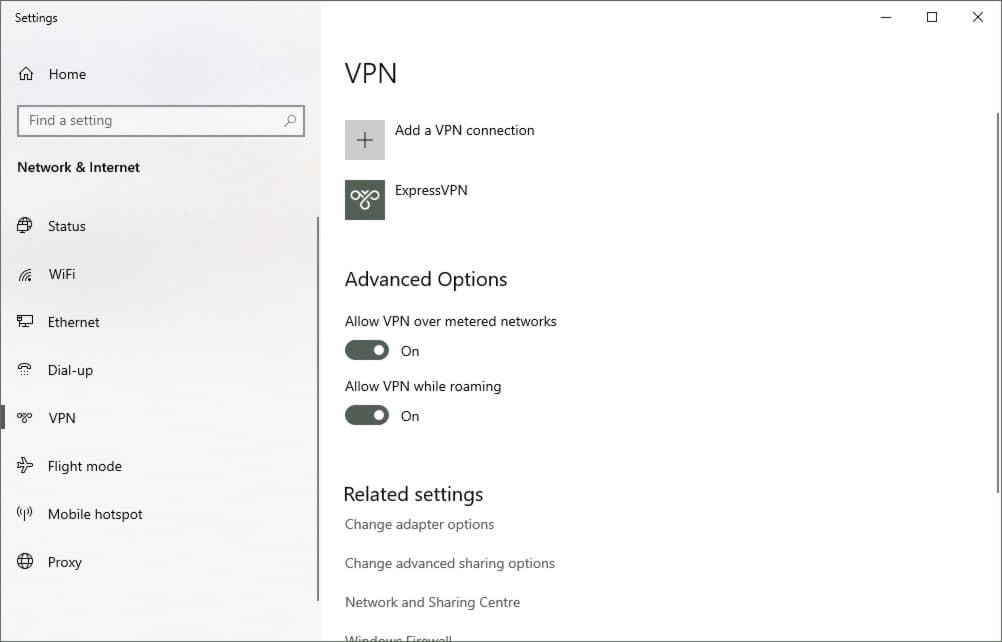 The end result of this is almost exactly the same as just using your VPN service’s downloadable client. There’s no real benefit to you to setting your VPN up this way, and it takes much longer – but the option is there if you want to try it.