See our full methodology in how we review VPNs.

SkyVPN is one of the worst VPNs we've tested. It should be avoided at all costs. It's an untrustworthy VPN that logs your IP address and other personally-identifiable data. It also fails to access Netflix and it's not safe for torrenting.

Why Trust Our Review?

Here are some of our key VPN testing statistics:

Although you can subscribe to a premium version of SkyVPN, we will be reviewing the more popular free version.

SkyVPN is truly one of the slowest VPNs we’ve ever tested. It’s also no way near as secure as its competitors.

It also doesn’t let you choose a VPN protocol, or even choose between protocols.

Even though it offers AES-256 encryption, it doesn’t offer any advanced features, like a VPN kill switch or split tunnelling, that can protect your online privacy.

See our list of the best free VPN apps

A base of operations outside of 14-Eyes or EU jurisdiction is preferable.

SkyVPN will not keep your internet activity private. The VPN logs personally identifiable information, like your IP address and location information. The VPN also has links to China, and the company has confirmed it will hand over user data if it's ever requested.

SkyVPN, Inc. is based in Hong Kong with obscure, hidden links to Chinese ownership.

Our free VPN ownership research revealed that SkyVPN Inc. is owned by Tengzhan Hongkong Limited (騰展香港有限公司), which refers to itself as SkyVPN Inc, Secure Sentry Communications, and Dingtone, depending on where you look.

The Tengzhan Group acquired Dingtone in 2015, according to this Chinese language disclosure document as there is no other reference in English language media.

Tengzhen Hong Kong Ltd incorporated in December of that year with You Xiumie (游秀妹) as director and sole shareholder.

None of this is easily available to find. There is nothing on SkyVPN’s website that alludes to its ownership or corporate history anywhere.

You can’t trust this VPN service. The Chinese government could potentially demand logs and information on any of its users whenever it pleased, and SkyVPN would have to cooperate. 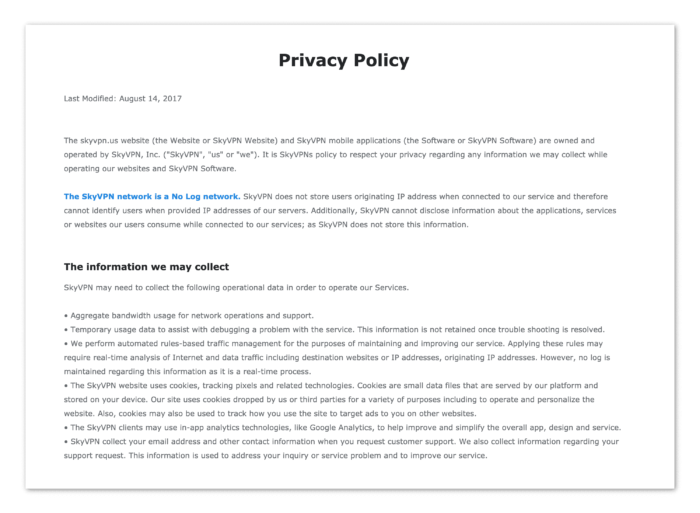 SkyVPN collects all this data:

Despite all that SkyVPN claims that unlike many VPNs that track you, “SkyVPN never does like that.” [sic]

SkyVPN is also quite open about how:

“Ads appearing on SkyVPN Software or any of our websites may be delivered to users by advertising partners, who may set cookies.”

We always raise an eyebrow when we read an unspecific statement like “other technical data” and “certain information” which can include anything – a lack of specifics is never good.

One thing SkyVPN is specific about is how it will hand over your data to whichever court asks for it.

SkyVPN is one of the slowest VPNs we've ever tested. Whether you're connecting to a nearby or international server, you can expect to see your internet speed drop by around 90%.

Here are the results we recorded when connected to a nearby SkyVPN server:

Here are the results from when connected to international SkyVPN server locations:

SkyVPN can’t manage more than 10 Mbps in download speeds – it’s one of the worst sets of speeds we’ve ever seen.

The global spread and coverage of the VPN server network is the most important factor here.

We also consider the number of city-level servers, plus how many IP addresses are maintained.

SkyVPN's server list depends on what device you're using. On the desktop app, you can connect to 18 server locations. This is impressive for a free VPN. On the mobile app, you can only connect to a US server, which is disappointing.

Ranked #45 out of 56 VPNs for Server Locations

SkyVPN has one US server to connect to when using the ‘Basic’ version on Mobile, including both iOS and Android. You have to pay for more.

Its desktop app, however, is much better, with a surprisingly decent 18 servers available.

For a free VPN, this is a surprisingly diverse and encompassing server list, with representatives from South America, Asia, North America, the Middle East, and Europe.

Without city-level server choice, you’re stuck with one server to cover large land masses like Canada, Australia and the US, though, and it doesn’t tell you where exactly the servers are based.

We checked and Canada’s server is in Toronto, New Jersey represents the US, and Brisbane is Australia’s. If you’re not near these places and want to use a SkyVPN local connection, your speeds are going to be even worse than the ones we recorded.

Streaming is rated by the number of different services unlocked, how many regional libraries are viewable, and how consistently the VPN can access them.

We tested on the single UK server for BBC iPlayer and found it doesn’t unblock the streaming service.

SkyVPN also fails to unblock any of Netflix’s global libraries.

Fans of Netflix or BBC iPlayer shouldn’t waste their time with SkyVPN.

That’s especially the case with SkyVPN’s one-server mobile app. It has no UK server and the single US one doesn’t unblock Netflix.

Not recommended for torrenting

We calculate the average download bitrate of every VPN using a bespoke torrenting setup.

Testing also factors in the percentage of servers which permit P2P, plus useful features like port forwarding.

Though SkyVPN does allow torrenting, we strongly recommend you avoid it. The VPN logs a lot of data, which makes it easy to identify you from your P2P activity. Its speeds are also very slow, so you'll have to wait a while for any files to download.

Ranked #46 out of 56 VPNs for Torrenting

SkyVPN does allow P2P file-sharing on most of it servers. However, it explicitly states in its Terms of Service that P2P activity is not permitted on some servers, including:

Therefore you shouldn’t attempt it as you’ll be violating the Usage Policy and could be suspended from using the service.

Torrenting is yet another activity we simply can’t recommend SkyVPN for.

Our remote-access server in Shanghai, China routinely tests if a VPN can beat restrictions and access a free, open internet. Obfuscation technologies and nearby servers are also a contributing factor.

SkyVPN does not work in China or any other countries that block VPNs. Even if it did, we would still not recommend it for bypassing censorship due to its invasive logging policy.

Ranked #56 out of 56 VPNs for Bypassing Web Censorship

SkyVPN has no obfuscation features to hide the fact that you’re using a VPN, and we don’t even know what security protocol it uses — because it won’t tell us.

If you need a VPN to combat internet restrictions, there are far better options. We recommend reading our guides on the best VPNs for the UAE and how to bypass Chinese censorship.

SkyVPN is unsafe and lacks transparency. The VPN does not disclose the VPN protocol it uses, so it's impossible to determine how well it's encrypting internet traffic. It also doesn't include a kill switch or any other VPN security features.

Ranked #51 out of 56 VPNs for Security & Extra Features

Similar to other low-tier free VPNs such as SuperVPN, SkyVPN reveals hardly any details about encryption or security on its website or app.

Don’t make the same mistake as its millions of users – this is our biggest concern yet.

SkyVPN talks about “military-grade” encryption and we did find mention of the claim it uses 256-bit AES encryption, which is a positive as this is strong encryption.

But there’s no information regarding SkyVPN’s chosen VPN protocol, so we have no idea whether it’s OpenVPN, IKEv2, or possibly something far less secure, such as PPTP.

We’ve messaged SkyVPN multiple times to ask, but have received no response.

There’s no VPN kill switch, so if the SkyVPN connection was to drop without you noticing your true IP address would be exposed to anyone who wanted to see it.

How is this rated?

A quality VPN should maintain functional, fully-featured applications and extensions for as many platforms and devices as possible.

This does not directly contribute to the Overall Rating, but instead makes up a portion of the Ease of Use rating.

SkyVPN is available on Windows, macOS, iOS, and Android. The desktop app is more fully featured than the mobile version, with more server locations and simultaneous connections.

It was originally designed just for mobile, but was later adapted for desktop, which becomes very apparent when you compare the two versions of the app.

On the free plan it’s only possible to use the VPN on one device at a time, so if you’re looking to protect multiple devices simultaneously you’re out of luck.

This rating mainly consists of the intuitiveness of setup and everyday use.

Device or platform compatibility and customization options are also a factor.

SkyVPN’s app looks like it was designed without much consideration for the user. The images and text are low-resolution, and there are a lot of adverts. In all, using SkyVPN is not an intuitive or enjoyable experience.

How to Install & Set Up SkyVPN

SkyVPN even claims to have no pop-up ads, which is blatantly false – the free version is packed with them.

Testing our speeds, it wasn’t long before we were told that our “data has been used up” and that we had to upgrade to VIP.

However, if you close that window you can, in fact, reconnect again and continue to use SkyVPN for free. 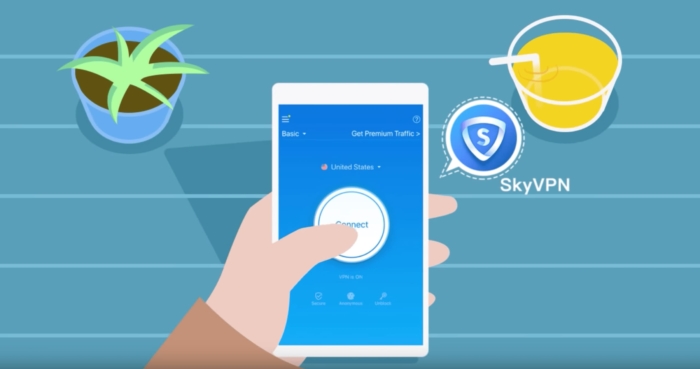 It’s simple, with a standard ‘Connect’ button in the middle of the screen and the server list just above, but SkyVPN is so basic it’s essentially stripped of anything useful.

This rating is based on our assessment of each VPN’s:

Not every VPN offers all of these, and they often vary in quality and response time.

SkyVPN's customer support is poor. There's no option for live chat, and the guides on its website are sparse and not very useful. For most problems, you'll have to use the VPN's slow email support.

Ranked #52 out of 56 VPNs for Customer Support

SkyVPN comes with an extremely limited FAQ and an email address for support.

And its answers to the questions are bad.

We contacted SkyVPN’s support email address multiple times to test how quick and helpful it was, but received no response.

SkyVPN is one of the worst VPNs we’ve tested. Avoid it, whatever you do.

Shady ownership, really bad speeds, awful logging policy, no streaming access — there’s nothing it does well at all.

Consider one of our VPN recommendations below instead.

Windscribe has a free version of its app that gets at least some things right. If you don't want to pay, turn your attention to this service which is our #1 free VPN recommendation. Read Windscribe review

Surfshark is a premium VPN, but not a pricey one. For a budget service, you get a lot of quality, including reliable access to streaming sites. Read Surfshark review