EXPERT ADVICE: Free VPNs for Mac are often slow, have data caps, and are blocked by streaming websites. ExpressVPN, the best Mac VPN, beats geo-blocks at fast and unrestricted speeds. Try it risk-free for 30 days.

The best VPN apps for Mac protect your internet privacy and security on your MacBook and iMac.

Secure macOS VPN software adds a layer of encryption to your internet connection, and hides your real IP address from third parties.

Our tests reveal that the best 100% free VPN applications for Mac are:

Windscribe is the best free VPN for Mac in 2023. While it’s limited to 10GB of monthly data usage, this excellent free macOS VPN is fast, private, and secure. It also unblocks several streaming platforms, which many safe free VPNs can’t do.

The problem with safe free VPNs is their limitations: slower speeds, data caps, or the inability to bypass streaming geo-blocks. For faster and unlimited VPN use, you’ll have to use a premium VPN for Mac.

Based on our latest tests, the overall best premium VPNs for Mac are:

ExpressVPN is the outright best VPN for Mac in 2023. Its well-designed and user-friendly macOS app delivers fast and encrypted connections across its 3,000 servers worldwide. Also, ExpressVPN continues to excel in our streaming, torrenting, and gaming tests.

We’ve tested all these VPNs on Ventura, Monterey, and Big Sur to ensure they secure your web browser traffic – including on Safari.

Our recommended VPNs are fast, private and secure, with user-friendly native macOS apps. You can download them directly onto your device, some even via the Mac App Store.

The table below compares how the top-rated Mac VPNs perform in each key testing category:

Here are the key Mac VPN testing statistics at a glance:

Following our VPN tests, we’ve identified a number of dangerous free VPNs for Mac we strongly suggest you don’t use.

Below are five of the worst free Mac VPNs we’ve tested:

What we don’t like: Turbo VPN is infested with third-party advertising, and it has worrying links to a suspicious Chinese company.

What we don’t like: Betternet’s free VPN lacks standard security settings like a VPN kill switch, suffers from WebRTC and DNS leaks, and has only one free VPN server.

What we don’t like: Touch VPN has an intrusive logging policy, uses the insecure PPTP protocol, and has no security features. It even leaked DNS requests in our tests.

What we don’t like: VPN Proxy Master logs too much that could be used to identify you. It also lacks important security settings, including a kill switch.

What we don’t like: Hola Free VPN logs your internet activity, it doesn’t use encryption, and it shares your idle bandwidth with other Hola VPN users.

The above macoS VPNs are simply too risky to use. Instead, use a free VPN for Mac we’ve verified to be safe.

Why You Need a VPN for Mac

Below are the three main reasons to use a secure VPN on your Mac:

How to Set Up a VPN on Mac

Each of the top VPNs for Mac we recommend come with a native app for macOS devices.

All you need to do is download the software from the VPN’s website, or through the Mac App Store, directly onto your Mac.

After that, you’ll need to follow the onscreen instructions. The process takes between 5 and 10 minutes from start to finish.

Follow the below steps to install a VPN on your Mac:

Our guide on how to set up a VPN on Mac covers all setup methods in detail, including how to install a VPN on a router.

How to Use a VPN on Mac

The brief video tutorial below shows you how quick and simple using a VPN on a Mac is. 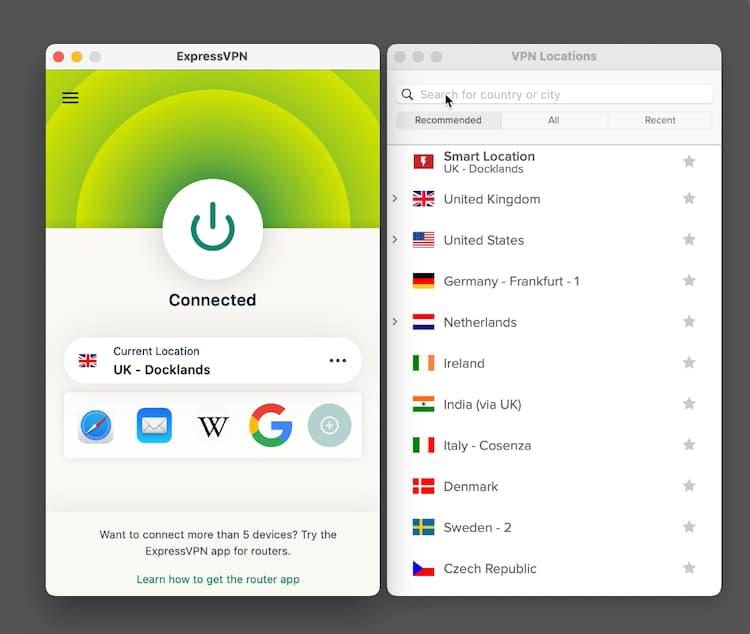 How to use a VPN on macOS.

All you need to do is open the VPN app and connect to a server by pressing the ‘Connect’ button.

You can select different server locations from the app’s server list.

Importantly, make sure you’ve enabled the kill switch, and that any IP/DNS leak protection setting is turned on. This guarantees extra privacy and security.

How We Test VPNs for Mac

To ensure the Mac VPNs that we recommend are the best available, we follow a strict and scientific review process.

We test each and every VPN on our iMac, MacBook Pro, and Mac mini — allowing us to verify a service’s quality across a range of macOS devices.

For Mac VPNs, we test specifically for:

Here’s a more in-depth look at all the factors we test for when ranking the best VPNs for Mac:

Minimum Requirement: A native app for Mac with some customization options.
We Recommend: An easy-to-use and feature-packed Mac app that can be downloaded through the App Store.

Every Mac VPN app should be as intuitive to use as Apple’s built-in applications. Each VPN should also include a baseline of standard features, regardless of whether it’s a premium service or not.

We make sure that there is a native app for macOS that can be easily downloaded either via a web page or through the App Store. We then check to see how simple it is to connect to a VPN server and change IP location.

We then look to see if the Mac VPN app has a kill switch, a split tunneling feature, or any more advanced functionality.

Due to the sandboxing and system requirements of macOS, many VPN providers don’t make the effort to implement all their features. The best will, though, making the application as fully-featured as its Windows counterpart.

A private logging policy limits the chance you’ll get identified from your online activity. Intrusive logging is more common in free VPNs, but we’ve also reviewed many premium Mac VPNs that collect too much user data.

Any paid-for VPNs that collect anything more than aggregated server data have been automatically excluded from this list.

As free VPNs have to make money somehow, many of them resort to intrusive data collection on users that can then be sold to advertisers. This makes using one of these VPNs as a tool for privacy and security essentially pointless.

In many of the free Mac VPNs we tested, we found serious privacy flaws. Our independent free VPN research has found that 80% share or log users’ real IP addresses.

To test for this, we inspect every VPN’s privacy policy. We record what information it collects, the purpose of the collection, and how long it’s stored for. In addition, we look for any services that present their logging practices clearly and concisely.

All the free services on this page are freemium VPNs, which means paying subscribers subsidize free users, so no data collection is necessary. We will never recommend any VPNs that log any personally identifiable user data.

Minimum Requirement: 5GB each month for free VPNs, and unlimited for premium VPNs.
We Recommend: Unlimited data with no bandwidth restrictions.

A data cap will limit the amount of bandwidth you can use each month. It’s the most popular way that safe free VPNs restrict their service.

This will inhibit the number of times you can stream, torrent files, or browse the web using your VPN —making it the most noticeable limitation you’ll face day-to-day. For this reason, every free Mac VPN must allow you to use a relatively large amount of data each month.

As well as checking every VPN’s data allowance policy, we download each service and check if there are any methods to obtain extra data each month. We’ve found that some VPNs increase your data allowance by up to 500% if you provide a username and password.

Overall, we tend to only recommend VPNs that offer at least 10GB of data each month. We strongly discourage using a VPN service below this amount.

We found that many of the VPNs we tested oversold their server space, meaning too many users are connected to one server at any given time. This results in slow speeds, connection dropouts, and an overall frustrating experience.

To measure every Mac VPN’s average speeds, we perform a number of manual speed tests. We test each VPN while connected to servers around the world.

We perform a monthly speed test per location on our MacBook Pro. Depending on its results, each VPN is then given a rating out of 10.

As you’d expect, the free services are always slower than the premium options. The best free VPNs will use clever techniques, like load balancing, to reroute traffic to a larger pool of servers. This makes these VPNs fast enough for HD streaming and quick torrent downloads.

Most VPNs, especially free ones, often have many users connected at once. This makes it easier for streaming services to detect and block the server’s IP address.

To see which free Mac VPNs work with streaming sites, we test all of them weekly on our MacBook Pro and iMac. We track how each VPN performs over time, with results going back multiple years.

We don’t state a VPN unblocks any streaming service until it’s worked for four consecutive weeks. This removes the risk of any anomalous results and means we know for certain that it’ll work for you, not just that it worked once.

We’ve developed an in-house test to calculate a torrenting rating for every VPN. This test is standardized and applies the same to each service we test.

Here’s how we test every VPN’s torrenting ability:

Overall, the best Mac VPNs will have an average torrenting bitrate of at least 5.0MiB/s, will keep no logs, allow P2P file-sharing on its entire server network, and support port forwarding.

As well as our six main testing categories above, we also look for other characteristics to find the best Mac VPNs.

For instance, we categorically disallow any VPN app that includes ads or pop-ups. Some free VPNs include advertisements within the app to support their business. While this is an annoyance and worsens user experience, these ads also pose a threat to your privacy. For example, Betternet is a free VPN that does not outright collect user data, but the free version includes Google Ads.

Betternet’s privacy policy states that Google Ads collects personal data to serve you more targeted ads — including your “mobile advertising identifier, IP address, and device information.” For this reason, none of the services we recommend include in-app advertisements.

In addition, we also expect a strong level of encryption and security. All the VPNs we endorse come with strong encryption techniques to securely tunnel traffic, with Perfect Forward Secrecy and an AES 256-bit cipher. The VPNs also come with a kill switch, IP, DNS, and WebRTC leak protection, and privately-owned DNS servers. These features prevent your identity from being revealed at any point.

Finally, we also consider how easy the VPN is to register and start using. We prefer services that don’t require you to input lots of personal information when signing up. If it’s a free service, we appreciate VPNs that don’t consistently try and push you to upgrade to paid subscriptions.