You can get a seven-day Surfshark free trial on iOS, Android and macOS, or get it free for 30 days by using its risk-free money-back guarantee. You can use Surfshark’s refund policy twice, for a total of 67 days of free use. 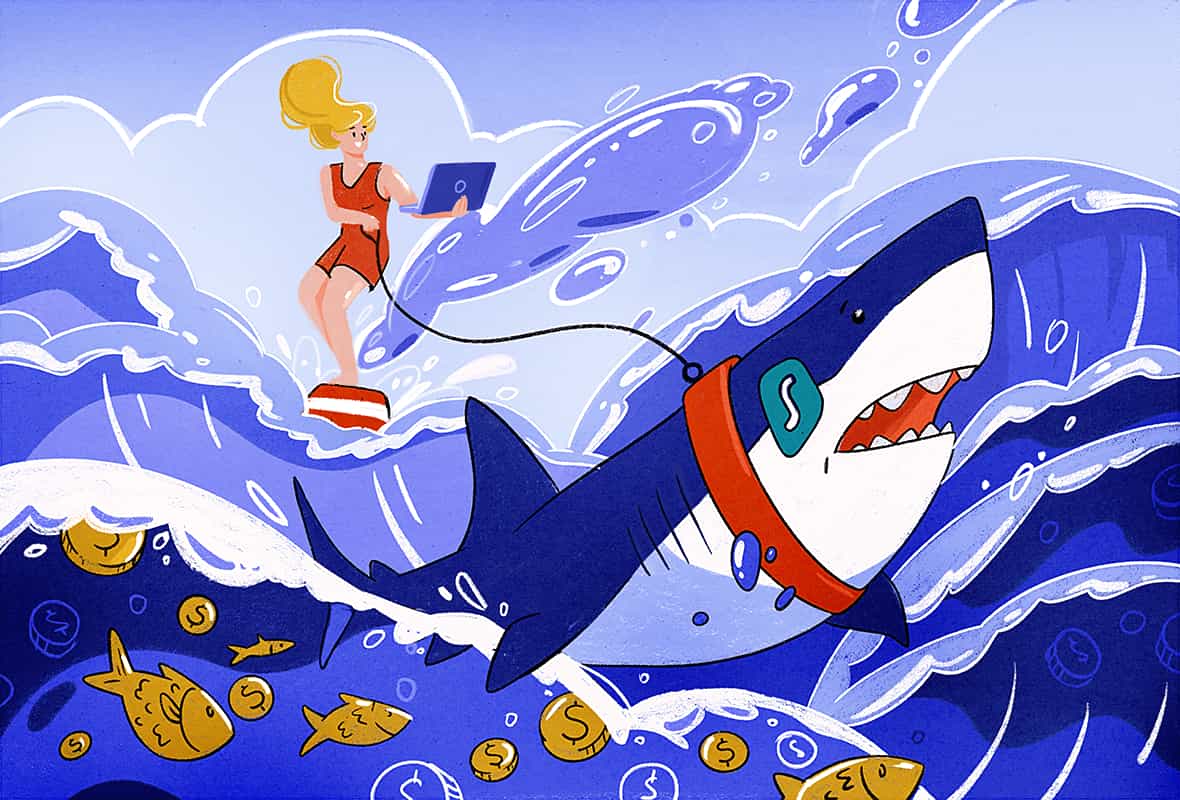 While Surfshark is one of the cheapest VPNs on the market, it’s certainly not free.

Having said that, you can sign up to a Surfshark seven-day free trial to try the service for free for a limited period of time.

It’s one of the best VPN free trials currently available, but you can only sign up to it via an iOS, Android, or macOS device.

To fully test Surfshark for longer than seven days, take advantage of its 30-day money-back guarantee, instead. Remember to request a refund within the 30-day window, though.

Uniquely, you can take advantage of Surfshark’s refund policy twice, which no other VPN service offers.

In essence, this very generous refund policy allows you to try Surfshark for free for a combined 67 days.

How to Get a 7-Day Surfshark Free Trial

Surfshark’s free trial is only available if you sign up via the App Store on iOS or Google Play Store on Android.

You can also sign up to the seven-day free trial via the Mac App Store, or by downloading the macOS VPN app on your device.

Once this is done, you can use the same account details to download and login to Surfshark’s free trial on any device.

This includes Windows, Fire TV Stick, and Linux devices. Surfshark doesn’t have a device limit, so you can test it on as many devices as you need.

How to Get Surfshark for Free on iOS

Here’s how to sign up to Surfshark’s seven-day free trial on iOS devices: 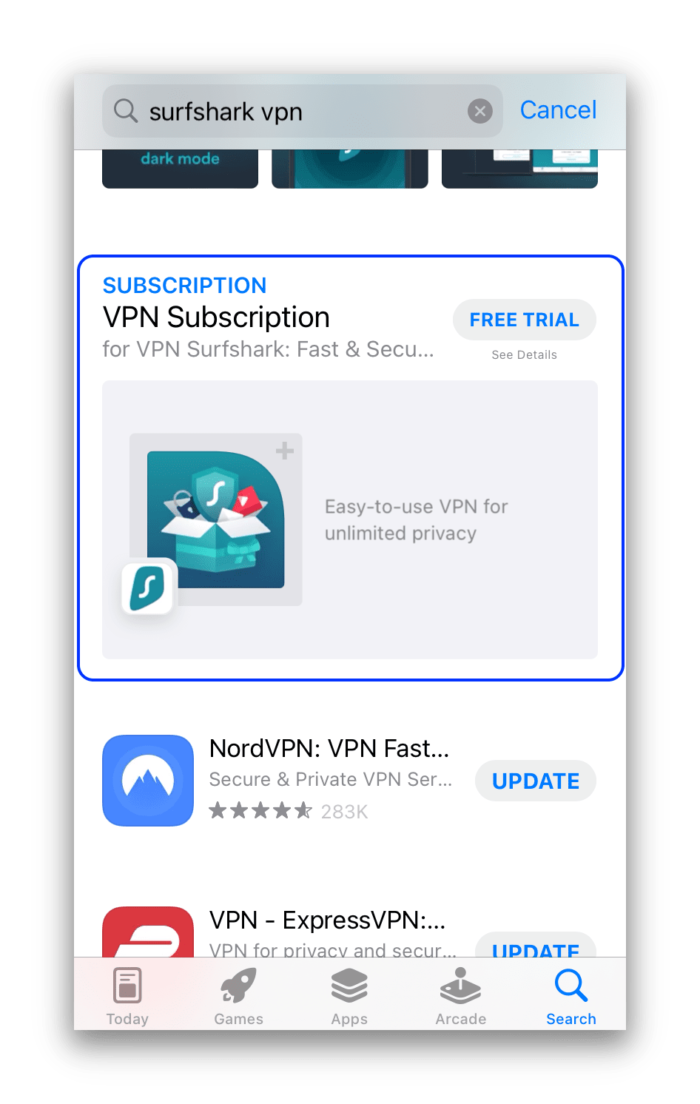 The Surfshark free trial is found under ‘VPN Subscription’ within the App Store. 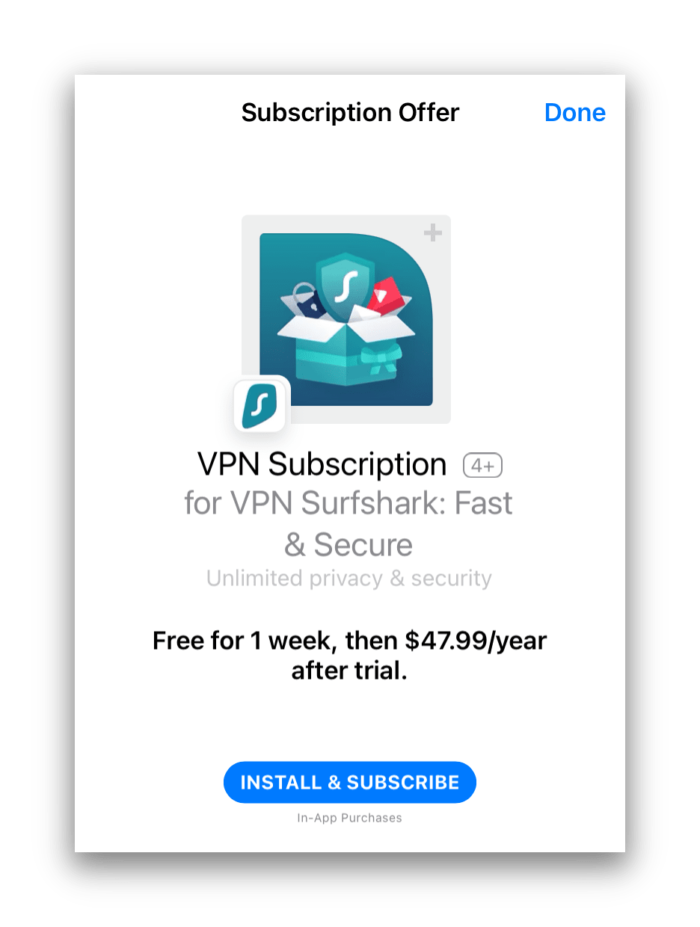 Surfshark advertises its free trial as part of a special subscription offer. 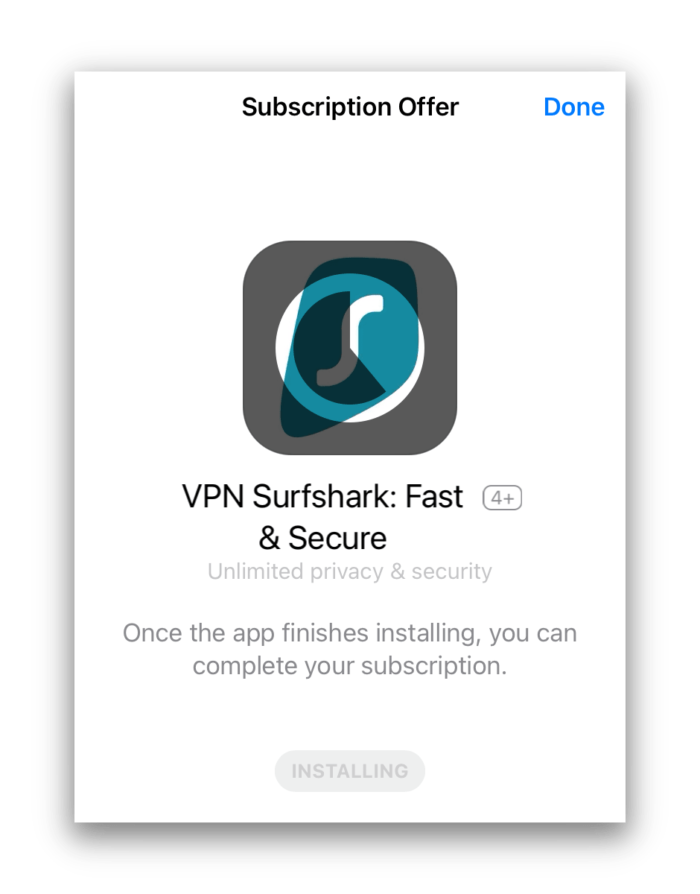 Surfshark will automatically install on your iOS. 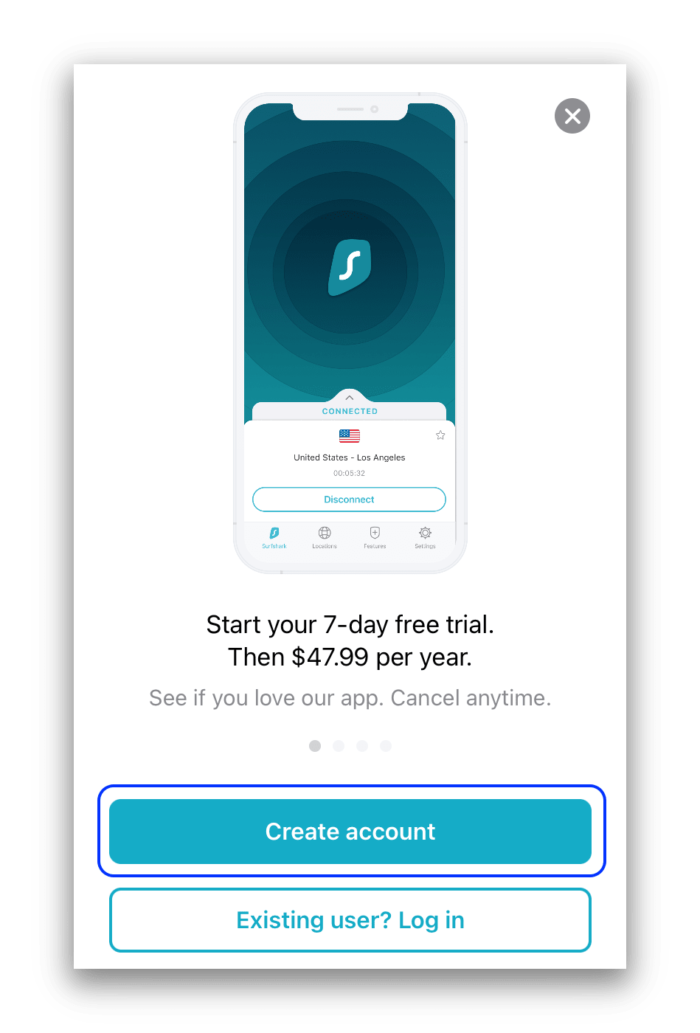 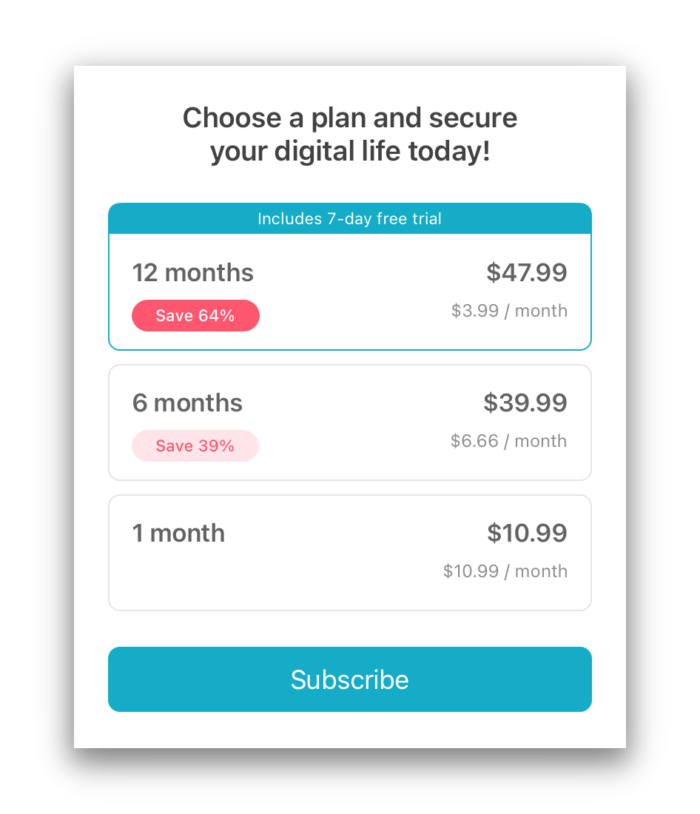 You have to select the 12 month plan to access Surfshark’s free trial. 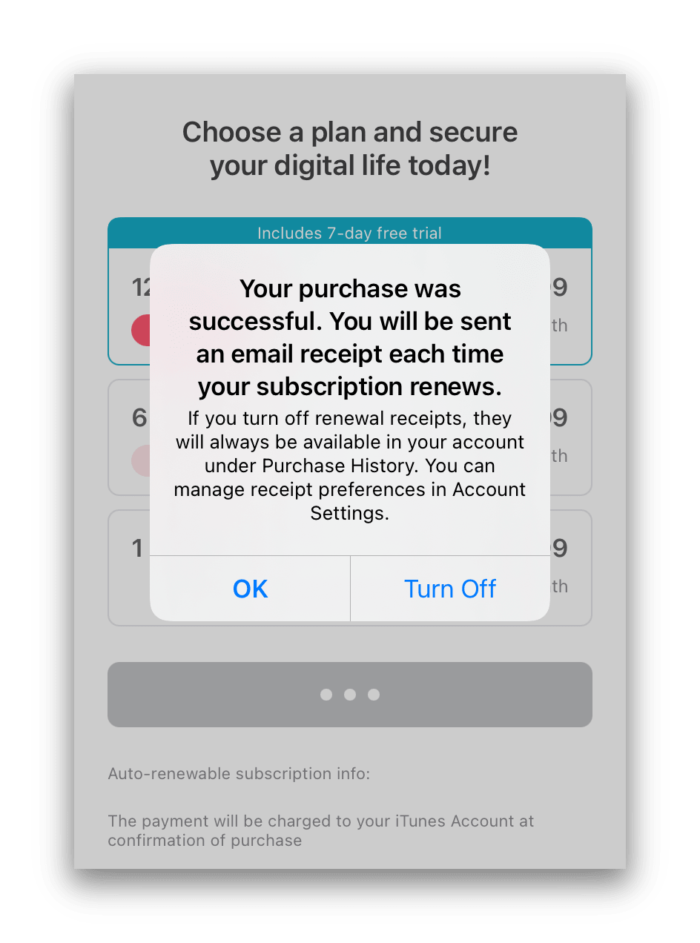 After seven days, your subscription payment will be taken and charged to your iTunes account. To avoid paying once the trial period is over, make sure you cancel auto-renew six days into the trial – 24 hours before payment is taken.

Better yet, cancel the free trial immediately. If you do not, Surfshark will take payment. This is explained under the Subscribe button: 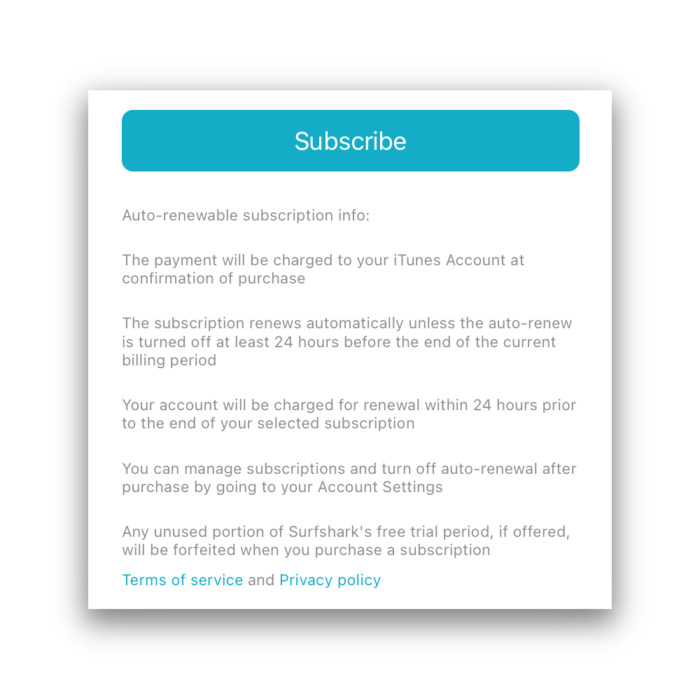 Cancel auto-renew via your iOS settings to avoid being charged.

How to Get Surfshark for Free On Android 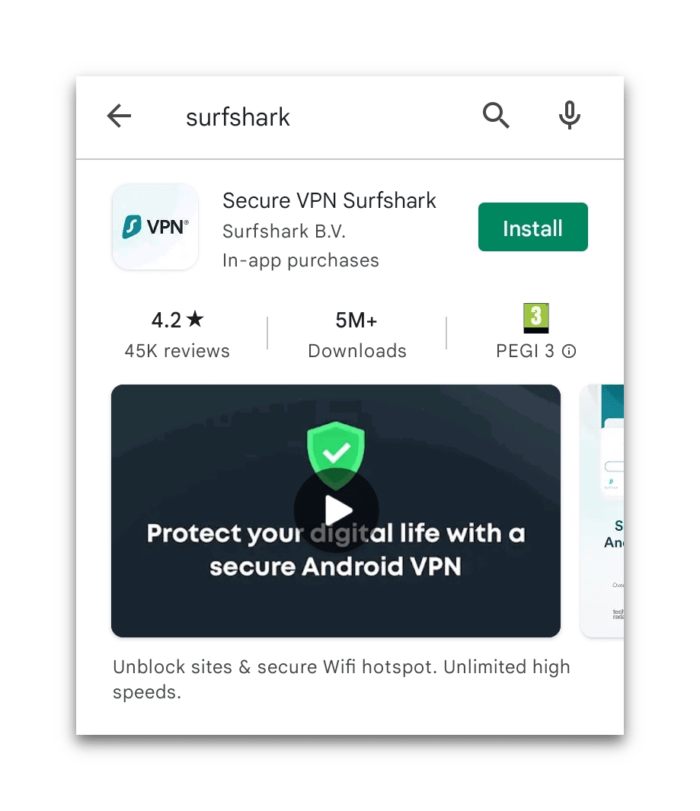 Surfshark is listed as Secure VPN Surfshark in the Google Play Store. 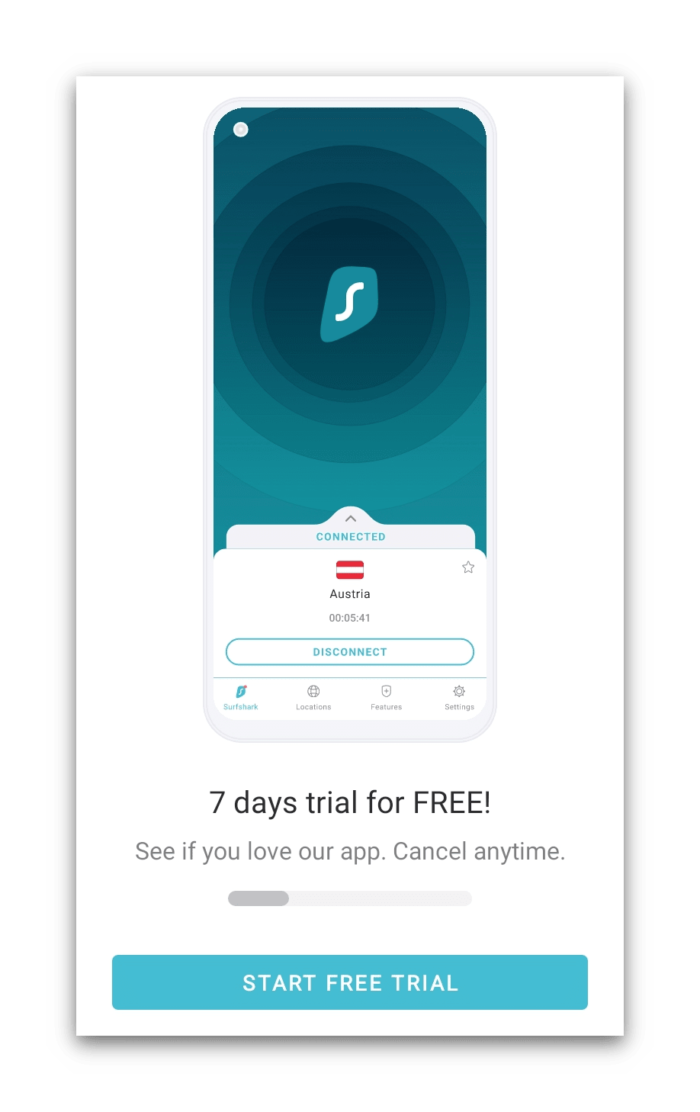 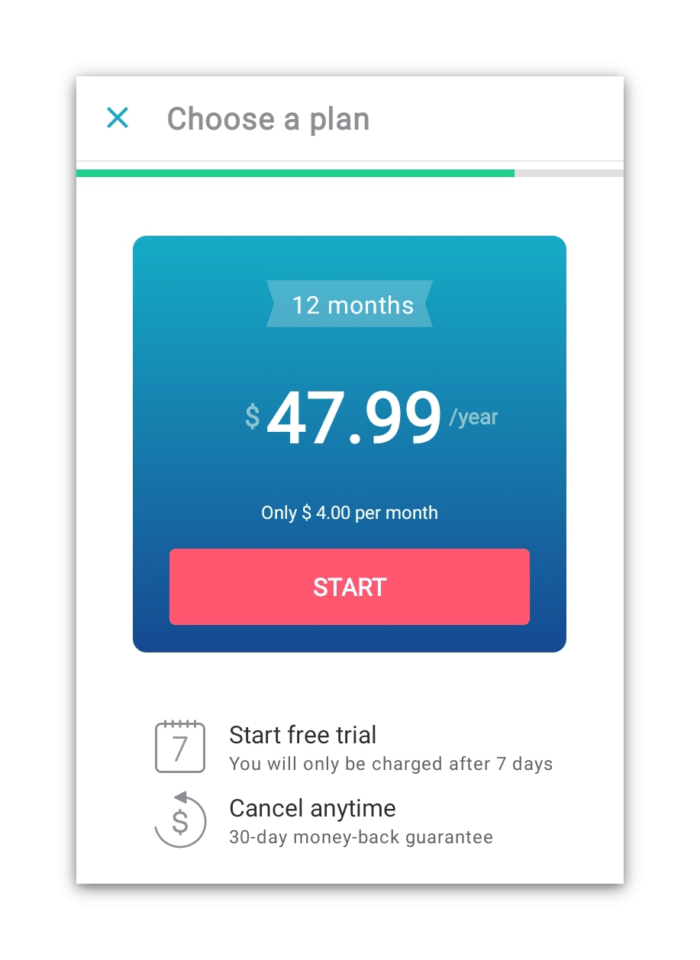 You have to choose the one year plan to get the Surfshark free trial. 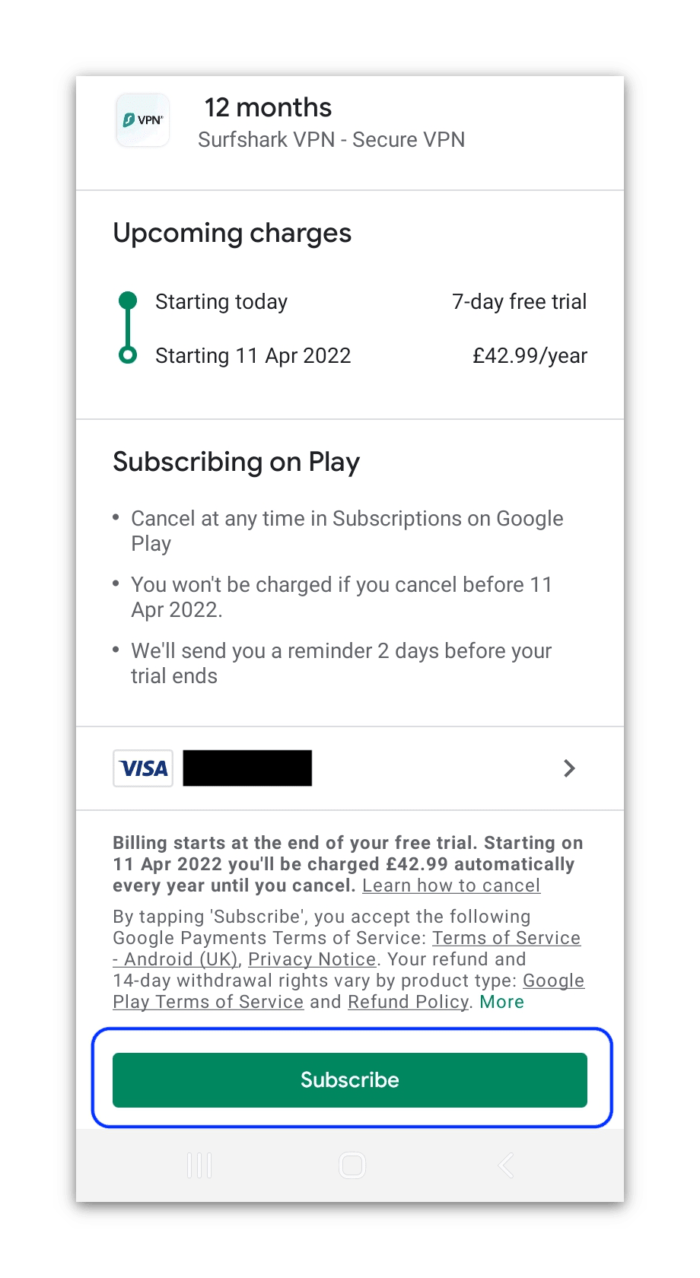 You will be automatically directed to the Surfshark app after you subscribe.

Surfshark will take payment from your Google Play account in seven days. As with iOS, you need to cancel auto-renewal at least one day before the trial ends if you want to avoid payment.

This is laid out under Auto-renewal info when choosing the Surfshark plan, which you can see below: 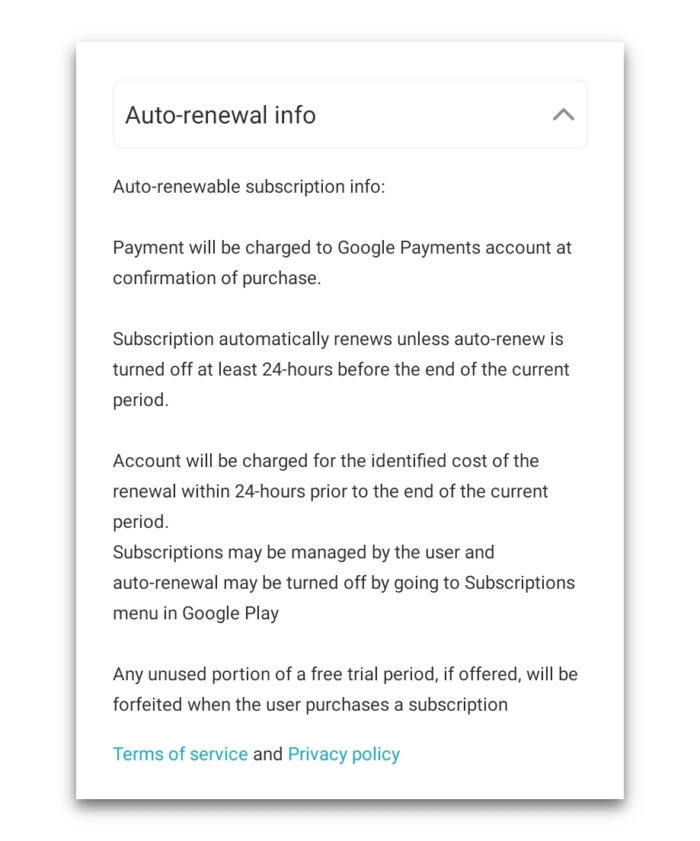 Automatic payment information is detailed in the auto-renewal notice.

How to Cancel a Surfshark Free Trial

If you sign up for a free trial on the Apple App Store or Google Play Store, your subscription will be set to auto-renew after seven days.

If you don’t cancel your subscription and disable auto-renew, your account will be charged automatically when the free trial period ends.

You’ll need to cancel your subscription at least one day before the end of the free trial period if you want to avoid payment.

In this section, we’ll explain how you can easily cancel your Surfshark free trial on iOS and Android devices.

How to Cancel a 7-Day Surfshark Free Trial on iOS

To cancel your Surfshark free trial on iOS, follow these instructions: 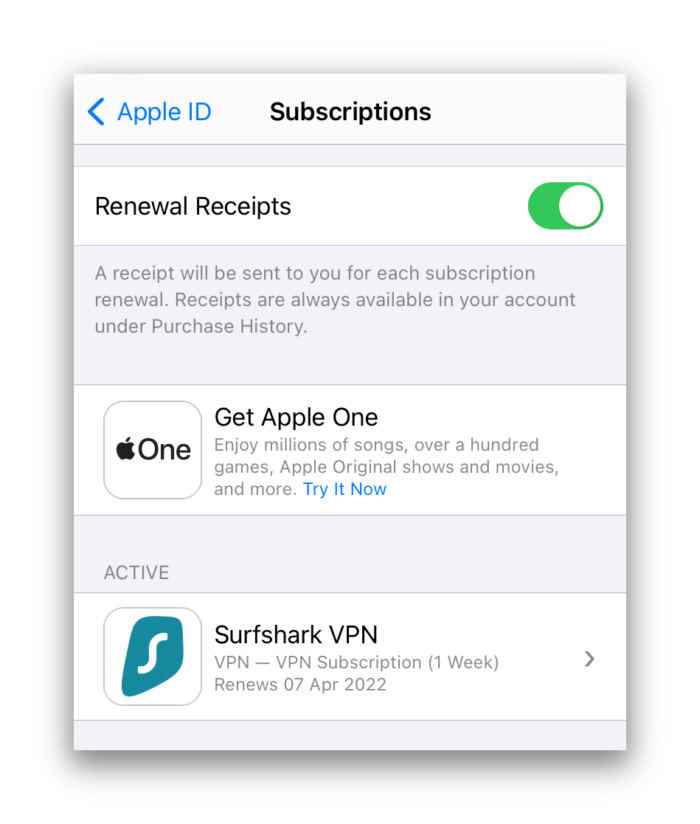 You will find an active Surfshark subscription in your iOS settings. 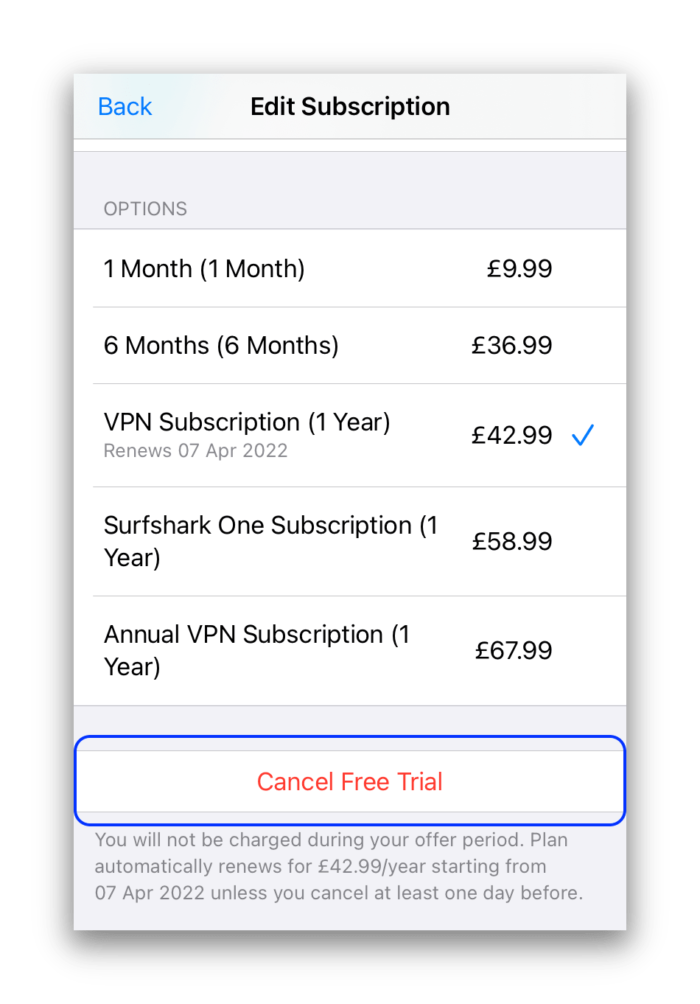 You need to cancel your annual Surfshark plan. 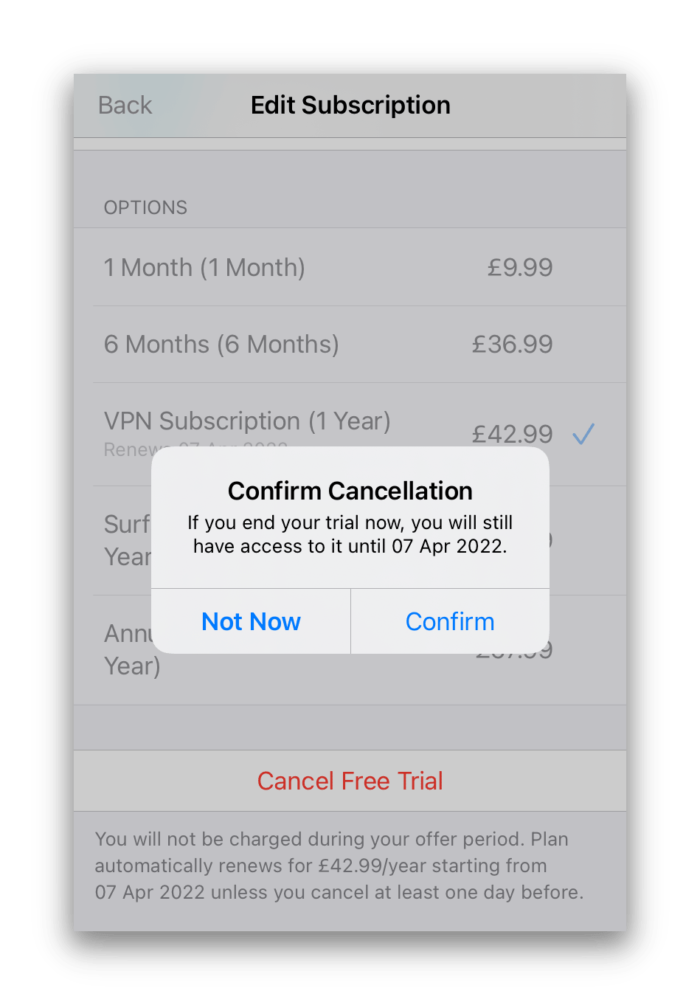 You can still use Surfshark until the trial period ends after you cancel your subscription.

How to Cancel a 7-Day Surfshark Free Trial on Android

To cancel your Surfshark free trial on Android, follow these instructions: 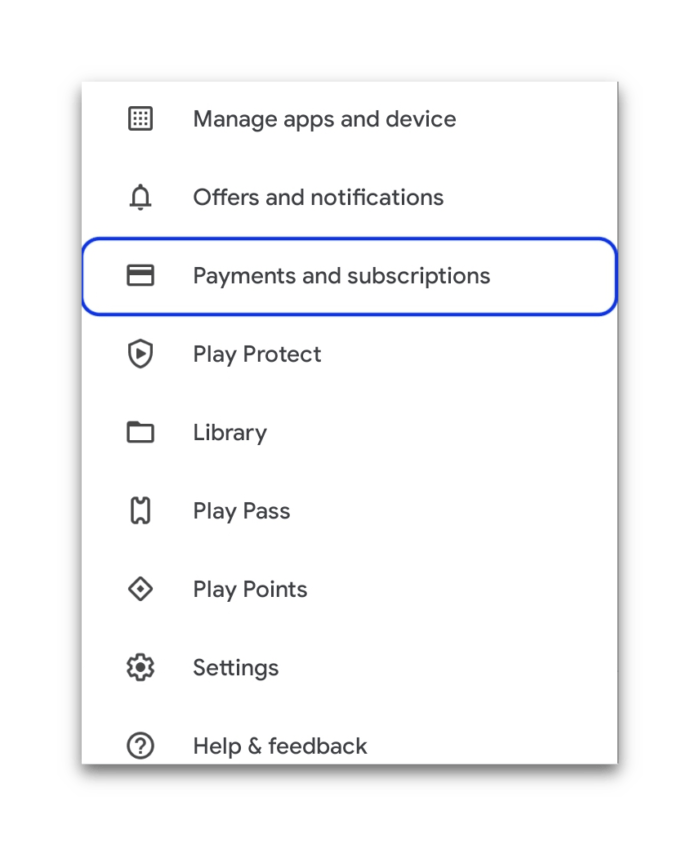 You can find your Surfshark subscription in your Google Play Store account. 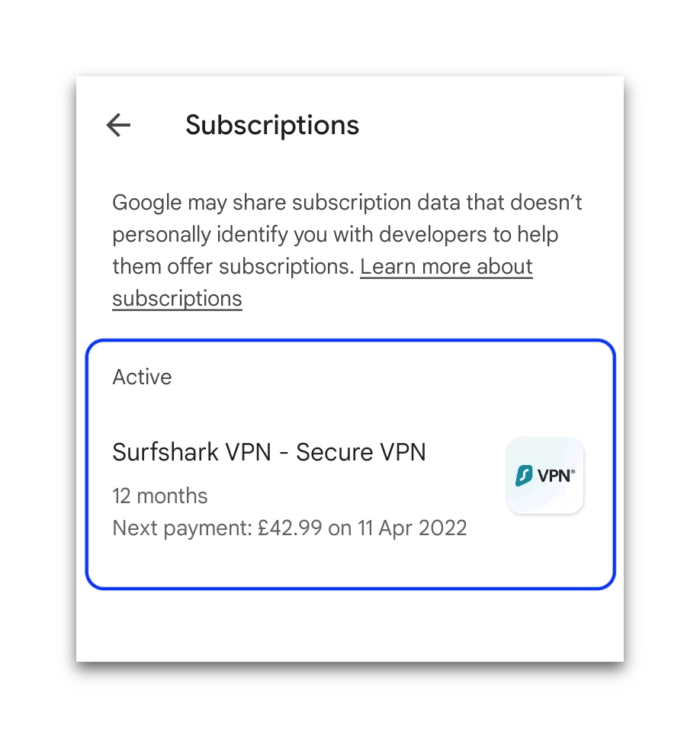 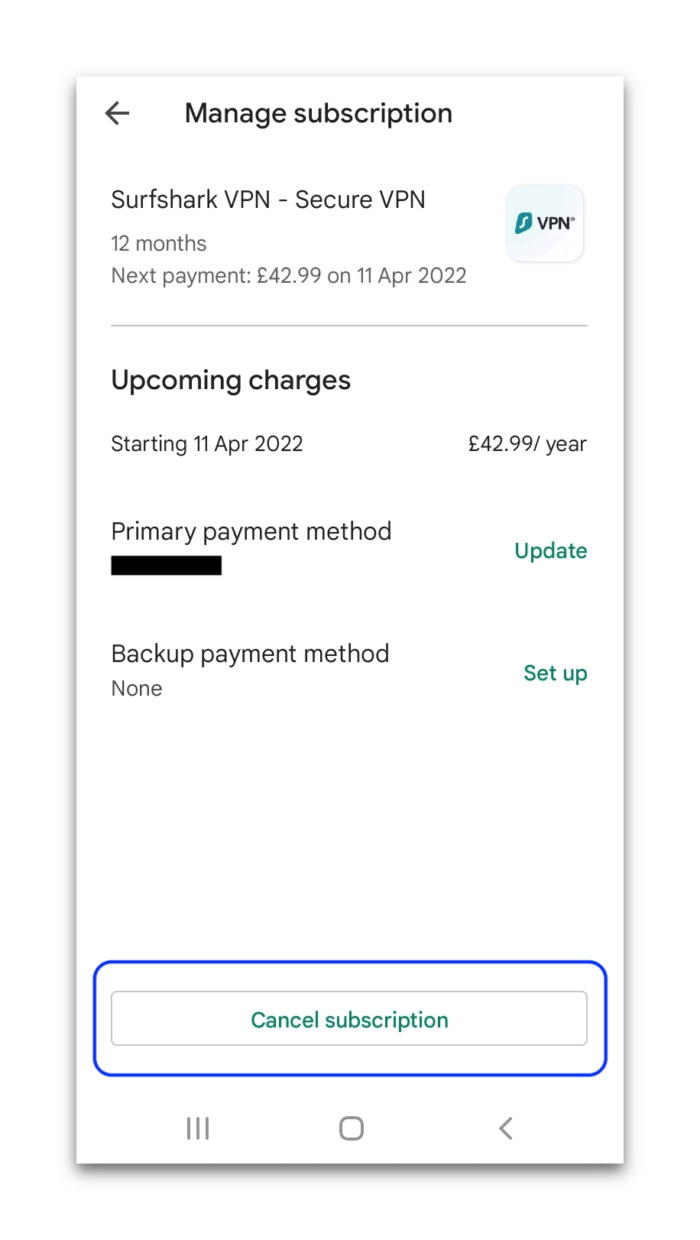 You can still use Surfshark VPN after you cancel your subscription, 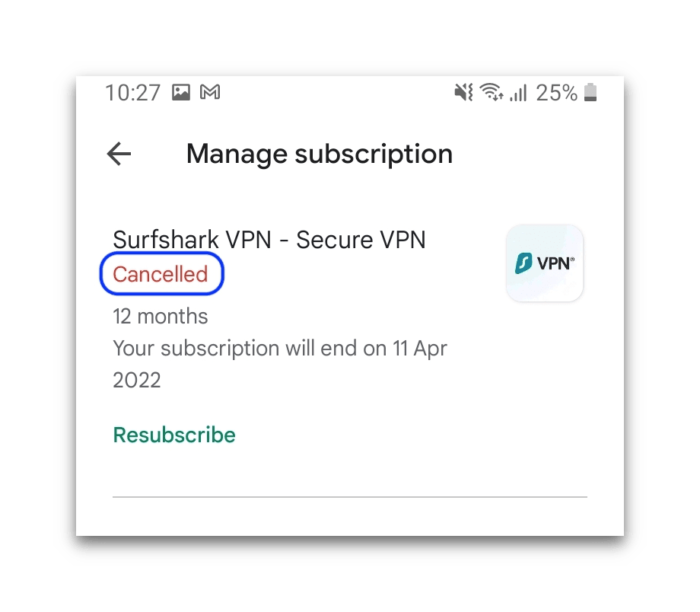 You’ll see a notification that your Surfshark subscription has been canceled.

How to Use Surfshark’s Money-Back Guarantee

You can trial Surfshark for longer than seven days by purchasing a subscription and getting a refund within 30-days.

In fact, Surfshark runs a no questions asked refund policy, so you don’t even need to provide a reason to cancel.

To cancel your Surfshark subscription, you simply need to get in touch with customer support and ask for a refund within the 30-day window.

You can do this by emailing support@surfshark.com or by selecting the ‘Support’ icon in the bottom-right corner of the Surfshark website and talking to a support agent. 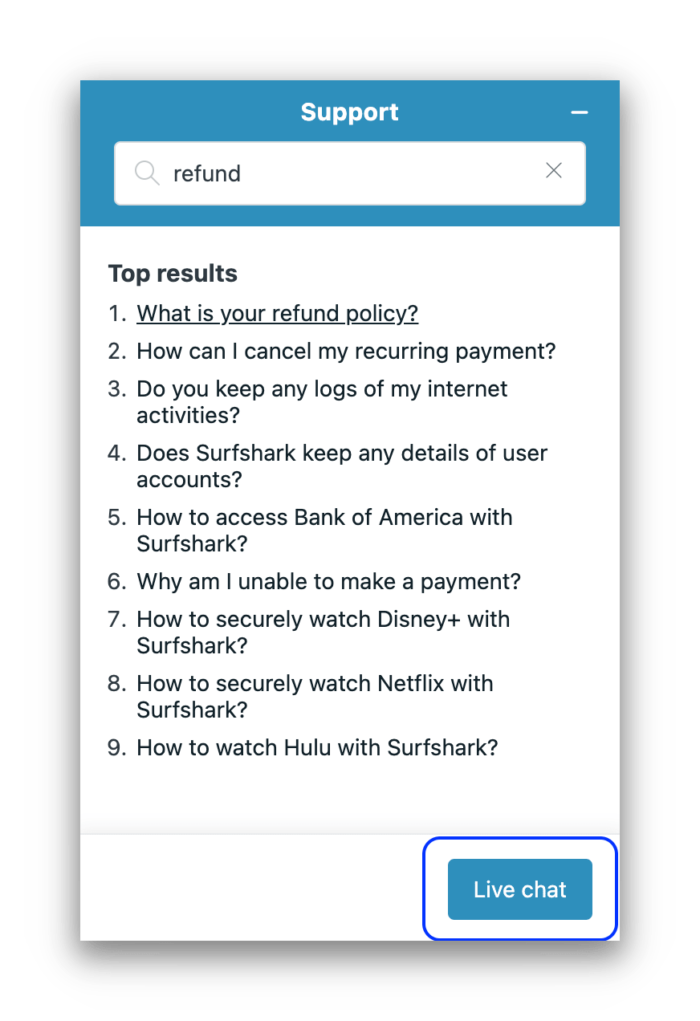 You can get a refund from Surfshark by chatting to its customer support.

You can actually get a full refund twice from Surfshark as long as “the period between both cancellations for which you claim refund is not less than 6 months.”

However, Surfshark’s terms of service states that the 30-day refund guarantee only applies for purchases via the Google Play Store or the Surfshark website.

In other words, if you signed up via iTunes/App Store/Amazon, via a reseller, or with a prepaid card/gift card, you’re not covered by the refund policy.

EXPERT ADVICE: If you sign up for the Surfshark free trial via the Apple App Store and then roll into a full subscription, the money-back guarantee does not apply. You have to cancel through Apple.

How Much Does Surfshark Usually Cost?

Surfshark represents great value. It only costs $2.30 per month on a two-year plan, which is less than the average monthly price of a VPN.

You will have to pay for the subscription cost of $59.76 upfront, though.

The two-year plan offers the biggest discount and the greatest value for your money. Be aware that it renews at the higher cost of $3.99 per month.

Use the table below to compare Surfshark’s two-year plan to the best monthly prices offered by rival VPNs:

Our review found Surfshark is one of the best VPNs for speed, security, and additional features.

Below is a table outlining Surfshark’s pros and cons as a VPN service:

Surfshark VPN’s applications are simple and well-designed, ideal for VPN beginners to use them quickly and easily. 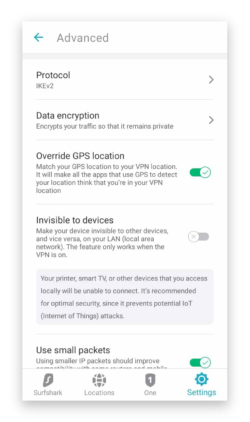 Surfshark uses secure protocols like OpenVPN and WireGuard, and encrypts connections via AES-256.

Moreover, its unlimited device policy lets you install and run Surfshark on as many devices as you want.

The VPN service is also great for streaming. Surfshark unblocks 10 Netflix libraries, it’s the best Disney+ VPN, as well as a good VPN for HBO Max.

Beware that Surfshark currently does not bypass Hulu’s VPN blocks, and it’s not a top choice for BBC iPlayer, either.

How Does Surfshark Compare to Other VPN Free Trials?

As of writing, Surfshark is second in on our overall VPN free trial rankings, behind CyberGhost.

CyberGhost offers a free trial with no registration for 24 hours on PC and Mac, three days on Android, and seven days on iOS.

Unlike CyberGhost’s, Surfshark’s free trial requires you to submit a payment method to access it. CyberGhost’s 45 day money-back guarantee is also much longer than Surfshark’s.

However, being able to use Surfshark’s money-back guarantee twice means you can actually use it for free much longer than all the other VPNs.

And although you have to sign up to it on mobile, Surfshark’s free trial is valid for all devices, including macOS, Windows, iOS, Android, Amazon Fire TV Stick, and more.

You can compare Surfshark’s free trial to other VPNs directly using the table below:

Yes, you need to insert payment details in order to access the seven-day Surfshark free trial.

You won’t be able to install Surfshark VPN without first using a payment method attached to your Google Play Store or App Store account. This doesn’t necessarily have to be a credit card; you can also use PayPal.

We prefer trials that don’t require payment information upfront, for convenience and to avoid the risk of accidentally spending money. But it is common practice for a VPN to require credit card details before granting access to free trials.

Will I Be Charged When the Surfshark Free Trial Ends?

You could end up being charged once the Surfshark free trial ends if you don’t manually cancel auto-renewal. Surfshark takes payment automatically as soon as the free trial period expires.

To prevent this, cancel auto-renewal via your device settings within the free trial period. It’s best practice to do it immediately after you sign up so you don’t forget.

You can read simple instructions on how to do this for Android and iOS further up this guide.

Importantly, remember that should you roll into a Surfshark subscription after signing up for the free trial via the Google Play Store or Apple App Store, Surfshark’s money-back guarantee does not apply.

To subscribe to Surfshark after the free trial period, cancel the trial before expiration and sign up via the Surfshark website. This way you’ll be eligible for the money-back refund promise.

Does Any VPN Have a 30-Day Free Trial?

Most VPN services come with no-questions-asked 30-day money-back guarantees. This policy lets you trial the VPN for a month and get all your money back if you cancel the subscription.

These are not free trials in the true sense, as you will be charged on sign-up. If you do not cancel, you will often be charged.

Should I Use a Completely Free VPN?

You can use a free VPN just as long as they’re safe. Many free VPNs are designed to log, collect and sell your data.

A premium VPN is always the best option, but we’ve identified free VPNs that are safe to use and with no strings attached. You should only use these free VPNs: