Surfshark works well with US Netflix, connecting to its Boston VPN server location. The VPN unblocks 10 Netflix regions at high speed. Surfshark is affordable, with a Smart DNS tool for added device compatibility. In this guide we'll also show you how to fix Surfshark not working with Netflix. 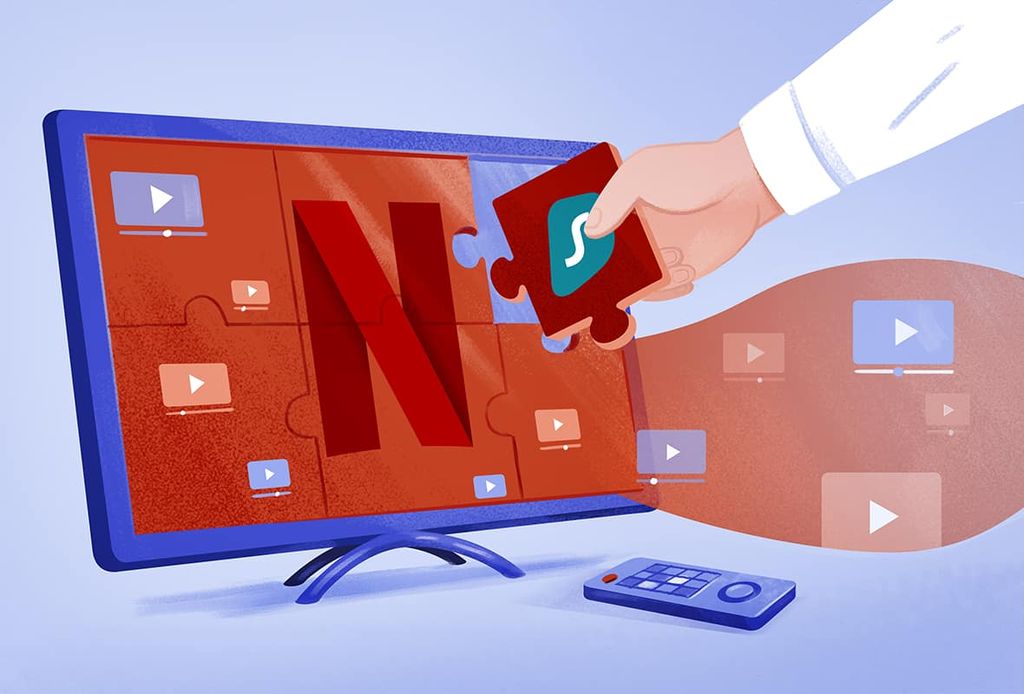 The movies and TV shows available on Netflix change according to your location. For instance, subscribers in the US can watch Breaking Bad, but those in Australia can’t.

Many people use a virtual private network (VPN) to bypass these geo-restrictions and get the most of their Netflix subscription.

A VPN changes your IP address to make you appear from a different location. It does this by routing your internet traffic through a remote server based in a country of your choice.

Sadly, since Netflix started blocking access to VPN and proxy users, it has become much harder to find a VPN service that unblocks the streaming service.

In this guide we’ll explain how good Surfshark is for Netflix, and we share troubleshooting tips if Surfshark isn’t working with Netflix.

Is Surfshark Good for Netflix?

Surfshark is an extremely good VPN for streaming Netflix.

In order to fully review Surfshark, we put the VPN service through our comprehensive VPN testing process.

The VPN service is great for streaming on a range of devices, too. This includes an impressive Firestick app to easily watch region-restricted movies on your TV. 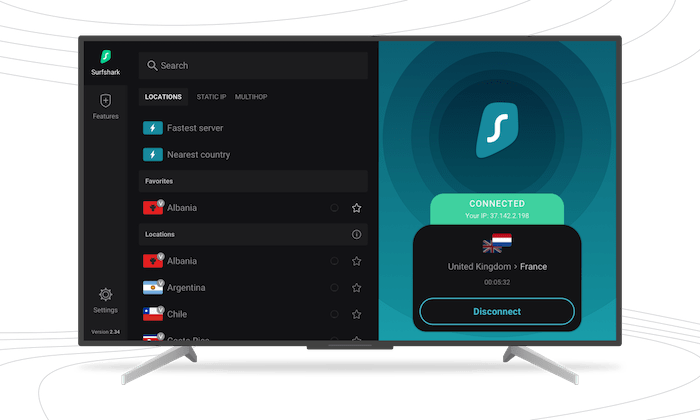 In the section below, we take a detailed look at what makes Surfshark a very good option for Netflix.

Alternatively, skip to our section on how to watch Netflix with Surfshark, or try our workarounds if you’re still seeing the Netflix proxy error.

Surfshark unblocks Netflix in 10 regions, including:

Being able to access the US Netflix library is a huge advantage if you don’t live in the US, since it has the biggest content catalog.

Other VPN services can stream more Netflix regions (e.g. Windscribe (32) or PrivateVPN (14), but the fact Surfshark works with the US, UK, and Indian libraries should be enough for most users.

The VPN’s UK servers also work with BBC iPlayer, one of the hardest streaming services to unblock. This makes Surfshark one of the top-rated VPNs for the UK.

Watch US Netflix from Anywhere

Not only can you access American Netflix via Surfshark’s US VPN servers, the VPN also lets you stream US movies and TV shows from any server location that isn’t streaming-enabled.

Simply connect to a country that isn’t listed above and you’ll be able to stream US content.

We love this feature because it allows users who don’t live near to the US to enjoy American Netflix content without sacrificing internet speed. You get the speed benefit of a local VPN connection, while accessing the most desirable Netflix region.

When you change IP address by connecting to a VPN server, your internet traffic has to make a longer round trip. This means a VPN connection will almost always be slower than connecting directly.

If your service’s speed isn’t fast enough, you’ll be restricted to low-quality video with a lot of buffering.

The VPN service isn’t the quickest VPN we’ve tested, but it’s fast enough to stream Netflix videos in high-quality and with no interruptions.

Our speed tests showed just a 10% drop in download speeds connecting to a nearby server using the WireGuard protocol. We measured speeds of 90Mbps – more than enough to stream Netflix in 4K.

Surfshark’s speeds are also good on international connections, which is crucial if you want to unblock movies and TV shows in far away countries.

The VPN also performs reasonably well on other global connections:

The above speeds were recorded using our 100Mbps fibre broadband.

Surfshark’s large server network of 3,200+ servers in 100 countries helps it to maintain good connection speeds by reducing server congestion and improving the distance between you and your local VPN server.

Surfshark protects your data with the safest encryption technologies on the market. It uses the military-grade AES-256 cipher to secure your traffic and lets you choose between a selection of great VPN protocols, including OpenVPN and WireGuard.

In addition, the VPN comes with effective IP, DNS, and WebRTC leak blocking tools, as well as a VPN kill switch that cuts your internet connection if the VPN ever stops working for a moment. Clearly, these tools are working well as we found no evidence of data leaks when we put Surfshark to the test.

Not only will Surfshark’s security suite keep you private and safe online, it’ll also help you beat Netflix’s geo-blockers. The obfuscation technology used by Surfshark makes VPN traffic look the same as regular HTTPS traffic, which makes it much harder for Netflix to identify you as a VPN user.

Obfuscation is applied automatically whenever you connect to a Surfshark server through the OpenVPN protocol. However, if necessary, you can change the connection protocol in the app’s Settings menu.

Simply open up Settings, select Advanced, and then choose your preferred protocol.

Compatible With a Wide Range of Devices

Surfshark lets you stream Netflix on all major desktop and mobile operating systems including macOS, Windows, Android, and iOS.

You can also use its Chrome or Firefox extensions if you prefer streaming video content in a browser.

Surfshark is also one of the best VPNs for streaming on your TV. Its dedicated Fire TV Stick app is very easy-to-use and well-optimized for bigger screens.

Simply download the app from the Fire TV app store and use the VPN to change your geographic region on a number of streaming platforms, including Hulu, HBO and YouTube.

Unlike many rival VPNs, you can easily use Surfshark on Apple TV, PS4 and other devices that don’t support native VPN applications.

To do this, Surfshark uses a SmartDNS (or Trust DNS) feature that works by rerouting your DNS requests, rather than hiding your IP address.

Smart DNS won’t encrypt your traffic in the way a full VPN does, so be careful when using it. But, it’s a great tool for spoofing your location and unblocking Netflix on Smart TVs and games consoles.

You can find full instructions for using Smart DNS on the Surfshark website.

Surfshark is very affordably and currently our favorite cheap VPN.

The VPN costs as little as $1.99 a month, if you’re willing to pay for two years up front. That’s considerably cheaper than our top-rated VPN, ExpressVPN, which costs $6.67 a month.

Moreover, if you want to try before you buy, Surfshark offers a 7-day free trial.

There’s also a 30-day refund period, meaning you can essentially stream with Surfshark entirely risk-free for up to five weeks.

How to Use Surfshark to Unblock Netflix

To use Surfshark VPN to watch Netflix:

Video: How to Unblock Netflix with Surfshark

You can also watch our video below. You’ll see us using Surfshark to unblock Netflix in the US and Japan.

One Netflix subscription is enough to unblock movies and TV shows in all 10 regions Surfshark can access.

If you connect to a VPN server that doesn’t support streaming, the service will also automatically redirect you to the US Netflix library.

If you run into any problems, like Netflix error m7111-5059, consult our workarounds below.

Surfshark VPN Not Working with Netflix?

Netflix is constantly finding new ways to block VPNs, in an effort to prevent people from viewing geo-restricted content.

As a result, you may experience your VPN not working with Netflix.

While Netflix does this because of its licensing agreements with production studios, viewers are the ones left suffering the inconvenience.

Surfshark is currently one of only a few VPNs that reliably work with Netflix. But, on occasion, you may come across the painfully familiar Netflix proxy error.

“Oops, something went wrong… Streaming Error. You seem to be using an unblocker or proxy. Please turn off any of these services and try again.”

Here are some easy workarounds to help you bypass the Netflix proxy error (also known by error code m7111-5059).

1. Use a Different VPN Server

Netflix blocks VPN servers by blacklisting the IP addresses that belong to them. While VPN services regularly launch new servers and refresh their old IP addresses, they’re not always able to keep up.

Luckily, Netflix is usually only able to blacklist a handful of servers at a time.

Therefore, the first thing you can try is reconnecting to a different server in the same location. It’ll have a new, unique IP address, that may not be blocked by Netflix.

You may need to try several different servers before you unblock the Netflix location you want to access.

In our tests, we always found a working server among Surfshark’s 3,200+-strong server network.

EXPERT ADVICE: Alternatively, you could use uNoGS to identify another country where Netflix hosts the content you’re after, and connect to a VPN server there.

2. Use a Different Encryption Protocol

If you can access your Netflix library, but the content is stuck on the loading screen, you may need to change the encryption protocol. To switch to a different protocol:

The Surfshark customer support team is on-hand 24/7 to help with any difficulties, including the m7111-5059 error.

We’ve always found the company’s support team very responsive and helpful in our years of testing. You can contact them via email or live chat.