Overall, ExpressVPN is better than NordVPN. Both VPNs are excellent, but ExpressVPN is more secure, and better for streaming and torrenting. However, NordVPN is faster and cheaper. ExpressVPN is our winner, but NordVPN comes a very close second. 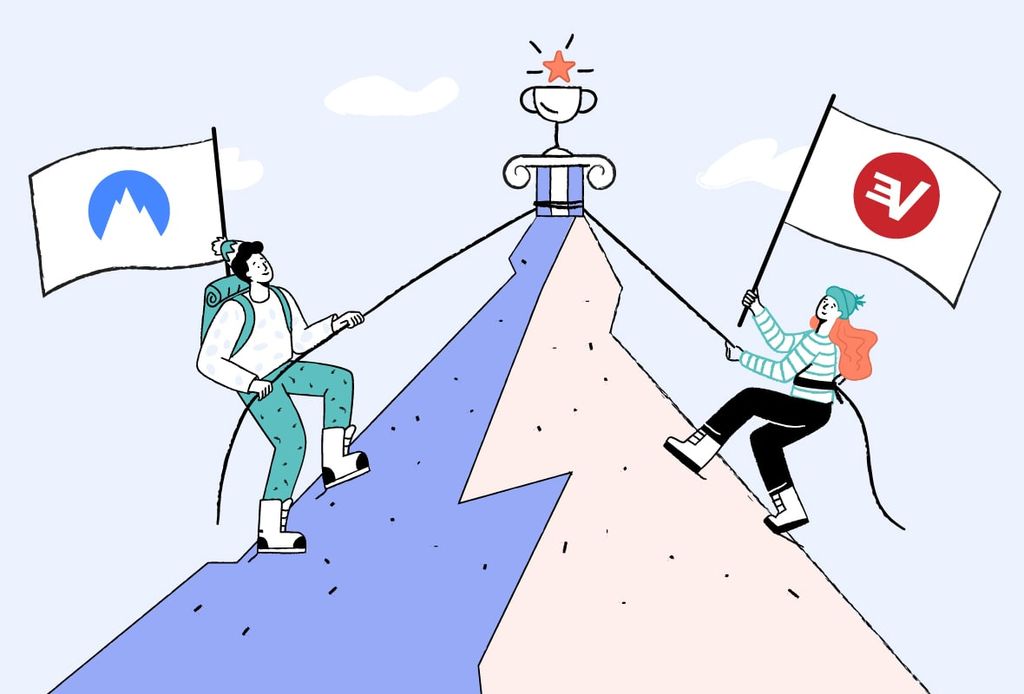 It’s a close call to pick the better VPN, and many of our readers ask us: which is better in 2022, ExpressVPN or NordVPN?

In this guide, we compare how ExpressVPN and NordVPN performed in ten key test areas, based on our extensive VPN testing process.

Before we dive into the detailed comparison, here is an overview of how ExpressVPN and NordVPN compare in each test category:

Table comparing which VPN service is best for each category.

As you can see from the table above, ExpressVPN beats NordVPN in 7 out of 10 key categories.

ExpressVPN comes out on top in areas such as security, streaming and torrenting. NordVPN only beats ExpressVPN in terms of logging policy, speed and price.

Below is a table comparing key information about the two VPN services, including price, number of servers and speed.

Which VPN Is Right for You?

Just because ExpressVPN is our overall winner doesn’t necessarily mean it’s the better VPN for you.

NordVPN is still one of the best VPN services we’ve tested. It’s also considerably cheaper than ExpressVPN, and comes very close in every area we tested.

For deeper analysis of each VPN service, read our ExpressVPN review and our NordVPN review.

The table below compares the average download speed, upload speed, ping times of NordVPN and ExpressVPN:

NordVPN and ExpressVPN are two of the fastest and most reliable VPNs on the market.

When testing a UK-to-UK NordVPN connection, we recorded an average speed loss of just 1%, compared to ExpressVPN’s 8%. 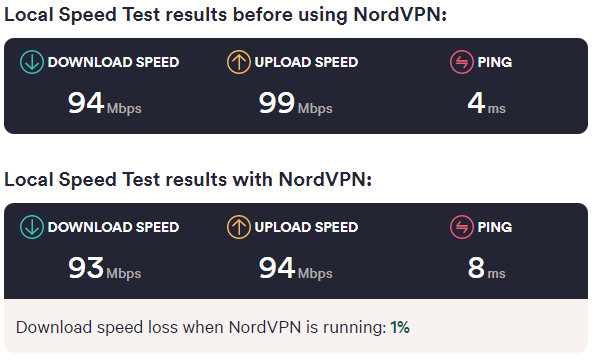 Both VPNs deliver excellent speeds, but NordVPN is marginally faster than ExpressVPN connecting to nearby servers.

Most of their VPN servers easily unblock content platforms around the world.

If you have trouble with a server, their customer service is very helpful in suggesting working servers.

ExpressVPN is the best VPN for US Netflix

NordVPN unblocks US Netflix, and several other regions, however ExpressVPN is more reliable across more devices.

NordVPN isn’t as reliable on Firestick and Apple TV

On the other hand, ExpressVPN’s Fire TV and Smart DNS solutions seamlessly unblock many streaming platforms, especially American ones.

Both VPN services are very good at streaming region-restricted content, but ExpressVPN is the better option to stream on all devices, especially US Netflix.

ExpressVPN and NordVPN are both excellent VPNs to download torrent files anonymously and securely.

However, ExpressVPN allows anonymous torrents on all servers, while NordVPN only allows it on specific ones. 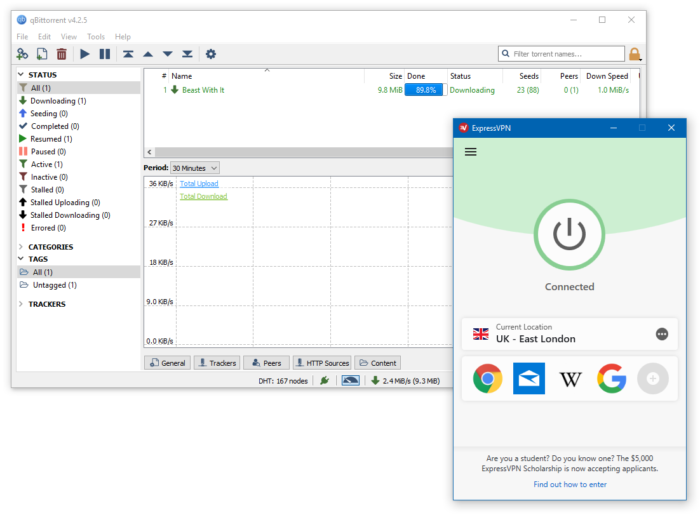 ExpressVPN is superior to NordVPN when it comes to torrenting capabilities. It’s faster at downloading files and it supports P2P traffic on its entire server network.

The table below compares ExpressVPN and NordVPN’s encryption and security features side by side to illustrate how close the VPN services are:

To protect their user’s security, VPN services must use the strongest and most up-to-date encryption software. Thankfully, NordVPN and ExpressVPN both excel in this department.

Both services use the industry’s safest VPN protocol, OpenVPN, along with the AES-256 encryption cipher.

NordVPN was the first of the two VPNs to incorporate the highly-regarded WireGuard protocol, however ExpressVPN is the stronger option when it comes to protocols due to the wider protocol choice and excellent automatic protocol selection tool.

Both VPNs include a number of important security features such as perfect forward secrecy, IP and DNS leak protection, and first-party DNS.

Moreover, both services use diskless (RAM-based) servers, which never write data to the servers, not even temporarily. 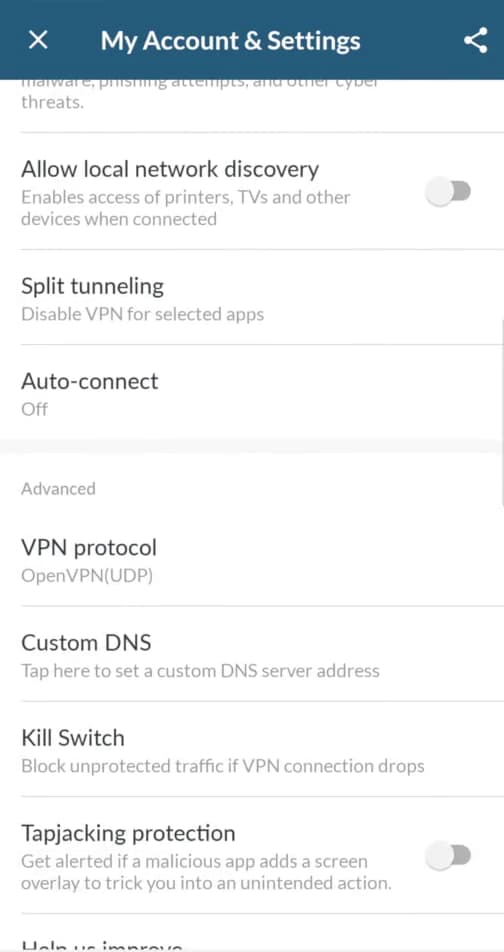 The NordVPN settings of its iOS application.

Uniquely, NordVPN has a ‘Double VPN’ (multi-hop) feature that lets users route their traffic through two different VPN servers to add an extra layer of privacy.

However, when it comes to security, we must take NordVPN’s 2018 security breach into consideration.

The breach was minor and NordVPN’s initiatives since the incident have been highly commendable. But, ExpressVPN has never suffered a breach to this date.

Both VPNs use the most secure VPN protocols, encryption ciphers, and advanced security features. ExpressVPN is marginally better because of its automatic protocol selection tool and because it has never suffered a security breach.

On the whole, both NordVPN and ExpressVPN successfully bypass aggressive internet filters in countries like China, Turkey and Russia.

Beating China’s Great Firewall is the ultimate test when it comes to bypassing censorship. Here, ExpressVPN outperforms NordVPN by some measure.

In fact, ExpressVPN is one of the most reliable VPNs to work in China. ExpressVPN worked 74% of the time testing VPN access from Shanghai.

NordVPN sometimes works in China, too, but it has been more inconsistent over the last three months. In our tests, NordVPN worked 52% of the time.

Also, NordVPN’s obfuscation tools are not available on iOS, so iPhone users will struggle to bypass censorship in China.

The table below compares ExpressVPN and NordVPN’s logging policies and their jurisdictions:

Both VPNs have been subject to external audits to confirm their logging policies, NordVPN by PwC in November 2018 and May 2020 and ExpressVPN also by PwC in July 2019.

These audits set an encouraging standard for the industry, but their purpose is only to confirm the VPN service is doing what it says it is in the logging policy. Audits do not assess the strength of a VPN provider’s logging policy.

Neither of these statements covers the full picture. Both VPNs keep some data, but the nature and scope of that data is not the same.

To limit the number of connections from an individual user, NordVPN stores the username and timestamp of each connection for the duration of the session. This data is then wiped within 15 minutes of disconnecting.

Because of this, we classify NordVPN as a no-logs VPN, and ExpressVPN as collecting anonymous server usage data.

Panama and the British Virgin Islands are located outside of international intelligence-sharing alliances (e.g. Five Eyes), where companies are not compelled by law to store any sort of user information.

ExpressVPN is ever so slightly better than NordVPN for privacy, mainly due to its BVI jurisdiction, and which we value more highly than NordVPN’s Panama one.

The table below summarizes the size and range of ExpressVPN and NordVPN’s server networks:

Both NordVPN and ExpressVPN have an impressive number of VPN servers across a wide range of countries. 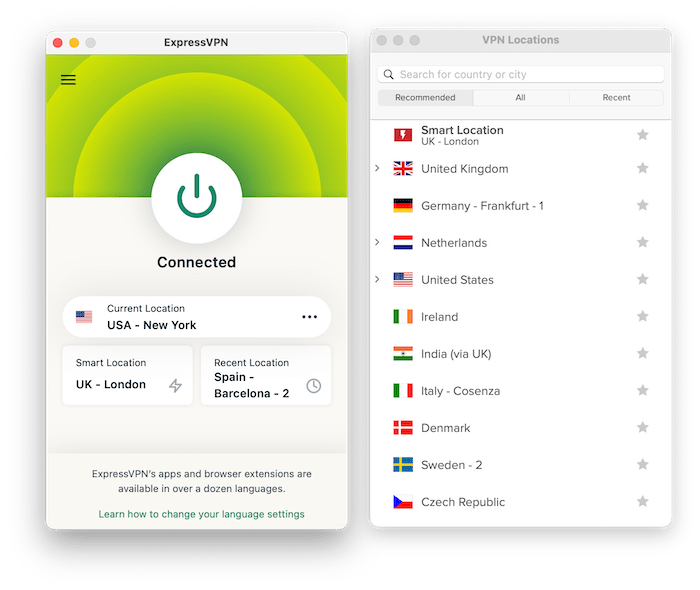 NordVPN, on the other hand, has a much larger server network, with over 5,155 servers compared to ExpressVPN’s 3,000.

The difference in server count may seem large, but you’ll unlikely notice any difference given that 3,000 servers is still impressive.

As for specific server locations, we recommend looking at ExpressVPN’s server lists and NordVPN’s.

Overall, ExpressVPN covers more countries, with a greater range of dedicated city-level server locations in the US and the UK.

NordVPN has more servers, but ExpressVPN wins because it provides servers in more locations. ExpressVPN runs servers in considerably more countries than NordVPN.

NordVPN and ExpressVPN Ease of Use Ratings:

NordVPN Ease of Use Rating: 9.5

ExpressVPN Ease of Use Rating: 9.8

The table below shows how both ExpressVPN and NordVPN are highly compatible with platforms and devices:

NordVPN and ExpressVPN lead the market in wide-spread device compatibility.

Both services have apps for all major operating systems. They each have router support, too.

NordVPN’s main application is easy to use, with an interactive map visualization of its servers. This doesn’t necessarily add much, compared to ExpressVPN’s more minimalist approach. 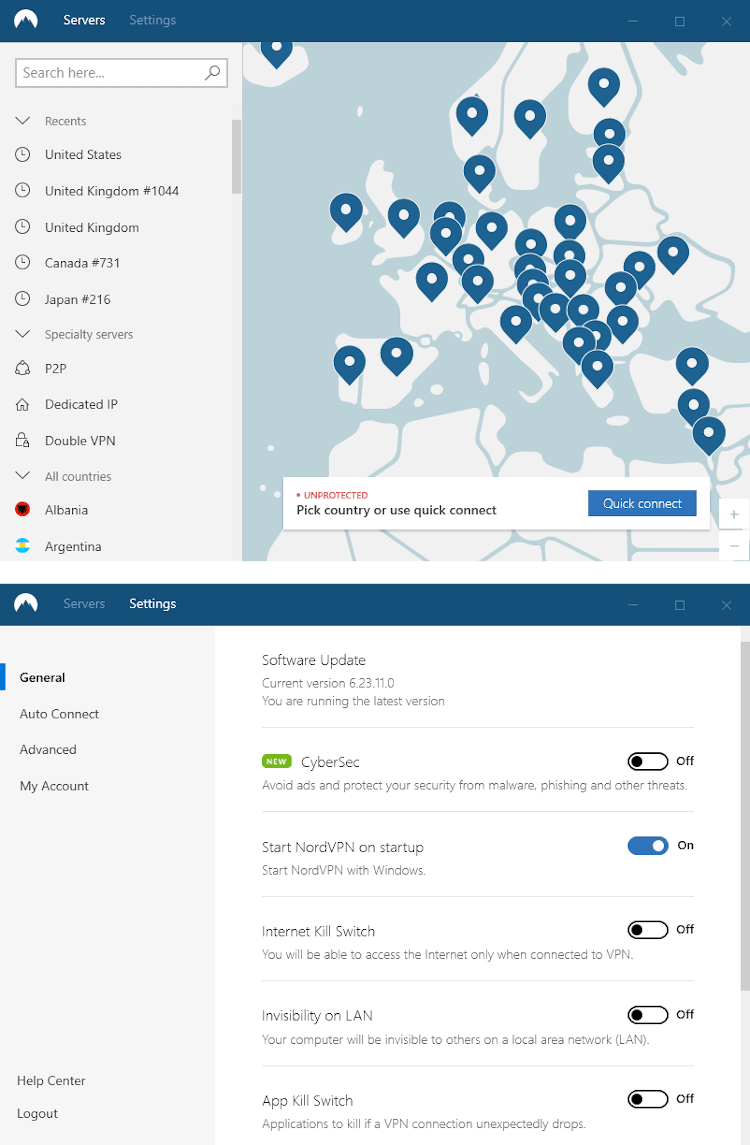 As for advanced settings, the two VPN services take different approaches. ExpressVPN puts its settings in a separate options window, whereas NordVPN uses a tab and toggle design. 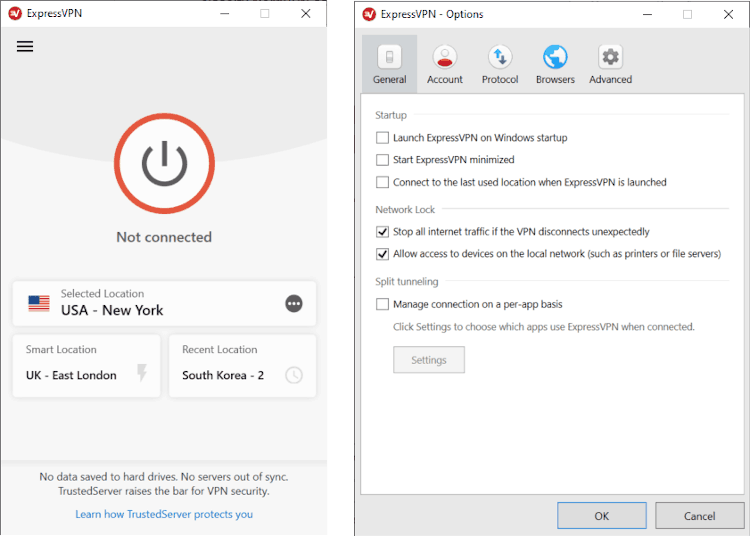 ExpressVPN’s apps all feature a big on/off button, and little else in their main window. The basic interface is pretty much identical across devices, whereas NordVPN varies more noticeably. 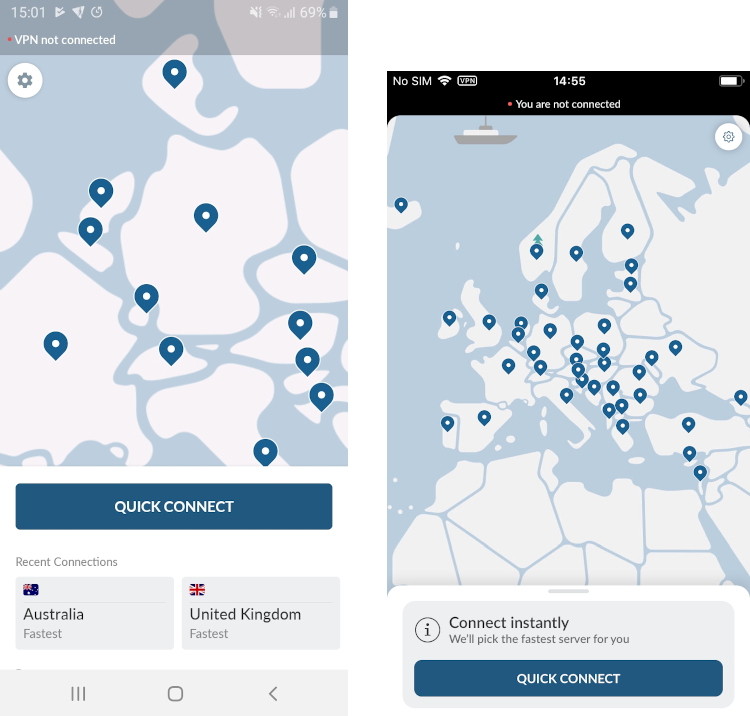 ExpressVPN’s extension is really a controller for the desktop app, which needs to be running for the extension to work.

We love that you can control the ExpressVPN app from the browser window, even if it’s not a conventional VPN extension. 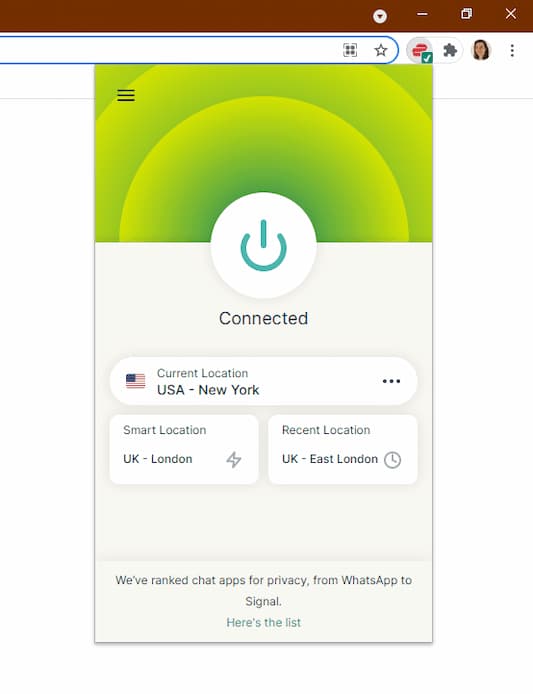 NordVPN’s extension works as a standalone, however it won’t work when the main software application is also running.

Overall, both ExpressVPN’s and NordVPN’s apps and extensions are highly intuitive across all devices – even if they do take different approaches.

Apps & Ease Of Use Winner: ExpressVPN

Both VPNs have easy-to-use apps for all major platforms and devices. ExpressVPN’s apps are simpler to use, and identical across all platforms. ExpressVPN’s browser extension is also more private and secure than NordVPN’s.

ExpressVPN and NordVPN both have email and 24/7 live chat support, with fast response times. 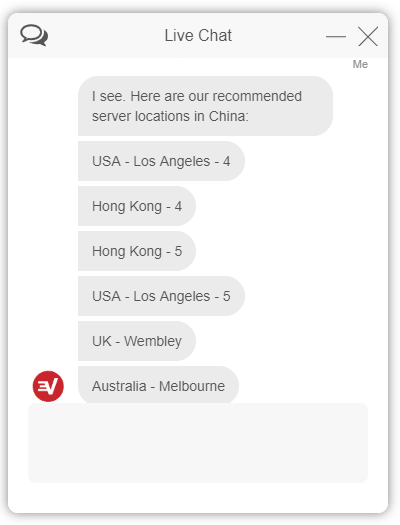 The VPNs are neck-and-neck in terms of the customer service materials they produce. For one topic, it may be that NordVPN has a more helpful guide, but for another, ExpressVPN’s material is better.

Neither service has phone support, but this is very common in the VPN industry.

Both VPN services excel at customer service, but ExpressVPN claims victory because we consistently find its 24/7 live chat support to be faster and more well-informed.

Test 10: Price & Value for Your Money

The table below lists NordVPN and ExpressVPN’s pricing plans:

NordVPN’s cheapest monthly price is $3.30, compared to ExpressVPN’s cheapest price of $6.67 per month. NordVPN is therefore significantly cheaper than ExpressVPN on a multi-year plan.

NordVPN is one of the best value VPN services you can buy if you’re willing to commit to a two-year plan and pay the full amount ($89.00) upfront.

If you’re not ready to sign up for a multi-year VPN subscription, then there’s less of a price difference between ExpressVPN and NordVPN.

Also, both NordVPN and ExpressVPN offer a 30-day money-back guarantee. It’s a no-questions-asked policy, which turns it into a virtual VPN free trial.

In other words, you can make the most of this refund policy to effectively use ExpressVPN for free and get NordVPN for free.

NordVPN is cheaper than ExpressVPN. A NordVPN subscription costs as little as $3.30 a month, but only if you sign up for two years and pay $89.00 upfront.