Over 30% of internet users worldwide use a Virtual Private Network (VPN), according to our new global VPN usage statistics report, which features rich insights into VPN user behavior. 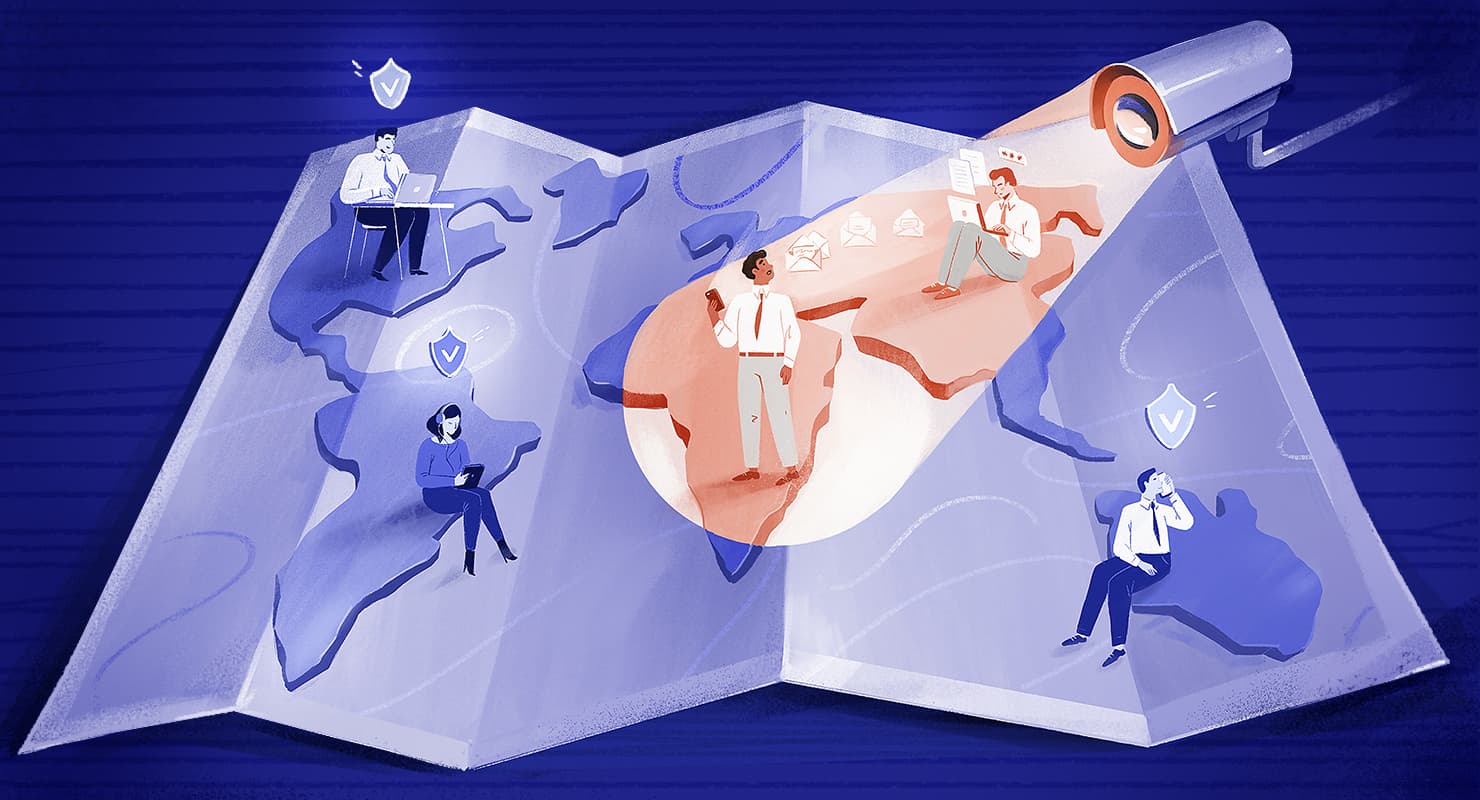 How and Why We Use VPNs

Over the last decade, Virtual Private Networks (VPNs) evolved from a niche tool for privacy obsessives to become an increasingly essential consumer product, used by all types of people around the world.

In 2020 the popularity of consumer VPNs continues to grow, and this once-obscure piece of software is now on the verge of becoming a mainstream internet security tool.

However, the motivations for using VPNs are highly diverse. While internet shutdowns and censorship have been the catalyst for recent surges in VPN use in authoritarian countries, more democratic nations have seen a sharp increase in VPN adoption for a multitude of different reasons.

To explore these trends and create the most comprehensive study on the state of VPNs in 2020, we partnered with GlobalWebIndex to produce the first Global VPN Usage Report.

This one-of-a-kind study is rich with new findings and statistics about VPNs and the people who use them.

The Global VPN Usage Report 2020 puts today’s world of VPNs under the microscope, presenting data from 42 countries – with a special focus on the U.S. and UK, to really shine a light on what makes these two mature markets tick.

VPN use has grown steadily since 2017. The following graph displays the average percentage of global internet users aged 16-64 using a VPN in the past month.

The following map shows where VPN use is currently most prevalent around the world.

VPN use is heaviest in Asia and the Middle East & Africa, in no small part due to governments being disproportionately repressive in those regions.

It’s also due to internet users in those regions being younger, more urban and more affluent, relative to the rest of the population, and therefore tending to be more comfortable with digital tools.

The following table shows the top 10 countries by VPN usage, calculated as a percentage of internet users in that country who have used a VPN in the last month.

It’s clear from our findings that the highest levels of VPN penetration are found where censorship and digital repression are heaviest, and – crucially – where their use remains legal.

In Indonesia, for example, authorities ramped up censorship to unprecedented levels during the 2019 presidential elections.[1]

While India is the world leader in internet shutdowns and also forces Internet Service Providers to block adult content.[2]

The following table shows the top 10 countries by growth in VPN usage. The figures in the Growth in VPN Use column reflect the change in each country in the number of internet users who had used a VPN in the past month in Q1 2020 compared with Q2 2017.

At first glance the results seem counterintuitive as the greatest relative growth in VPN penetration has been in countries with high levels of digital freedom, such as Australia and the Netherlands.

However, it’s possible to attribute this growth to the introduction of unpopular new surveillance laws in both countries during the period since 2017, which is the baseline for comparison.

For a comprehensive list of countries, see the full report.

The following chart indicates the gender split of internet users worldwide who have used a VPN in the past month.

The following chart indicates the level of education of internet users worldwide who have used a VPN in the past month.

The following chart indicates the income levels of internet users worldwide who have used a VPN in the past month.

The following chart indicates the age group of internet users worldwide who have used a VPN in the past month.

The highest-earners are the most likely to use a VPN, linked to affluent users often being more frequent travellers.

Other trends include that VPNs are favoured by more tech-savvy younger generations and that VPN usage increases with education level.

We also identified that VPNs are becoming more popular with baby boomers, with usage growing by 37% since 2017.

The following chart indicates the frequency of VPN usage for U.S./UK VPN users.

The following chart indicates for how long U.S./UK VPN users expect to continue using the product.

VPNs have become an essential day-to-day tool for many internet users in the U.S. and the UK, with over three-quarters using VPNs at least once a week (77%) and over a third (36%) every day.

Furthermore, 44% of users think they will keep using their VPNs indefinitely as opposed to for a specific purpose, such as travel.

We also found that iPhone VPN apps and Android mobile VPNs are edging ahead in popularity in the U.S. and UK over desktop versions of the software. In those two markets, 64% of VPN users have used a mobile VPN in the last three months, compared to 62% who have used either a Windows PC VPN or a Mac VPN.

Why Do People Use VPNs?

In the following sections, we take a deeper dive into VPN usage in the mature VPN markets of the U.S. and UK.

The following table shows the percentage of U.S. and UK VPN users who consider each reason for using a VPN as important to them when choosing a service.

We can see from the above that VPN users in the U.S. and UK use the software primarily for privacy and security purposes rather than to gain access to entertainment or geo-restricted content.

What’s particularly interesting is the apparent contradiction between the most common reason for using a VPN in the U.S. and UK – to stay safe on public WiFi networks (51% of VPN users) – and where they are actually most commonly used by far, ie in the home (81% of VPN users).

One possible explanation for this contradiction is that perceived threats to online security are associated more with public spaces than with private spaces.[3]

What Do People Look for in a VPN?

The top five factors for UK and U.S. users in choosing a VPN are:

For the full list of factors, see page nine of the full report.

There is clearly a disconnect between what we’ve seen are users’ primary motivations for using a VPN – privacy and security – and what they actually look for in a service, ie performance considerations.

We also found that 72% of UK and U.S. users are opting for free VPNs.

This is further evidence that VPN users’ choices do not line up in practice with their motivations, as in earlier investigations we have found the majority of free VPNs to have security and privacy flaws.

Given that 36% of users in those markets have used a paid VPN service, there is a small group of users who use both free and paid services, potentially using free services to explore whether VPN software is right for them before committing to a paid subscription.

62% of VPN users associate VPNs with the term “secure”, suggesting that VPN users may be treating all VPNs as equally secure, when research has proven otherwise.

Only 26% of VPN users associate the tool with the term “legal”, showing the continuation of a common misconception on the legality of VPN usage globally.

The following graph shows the change in percentage over time of global internet users who are concerned about the internet eroding their personal privacy.

We can see that that concerns about online privacy have grown slowly but largely steadily since 2013.

While there was a spike in early 2018, around the time that the Facebook and Cambridge Analytica scandal, along with the lead-up to GDPR, dominated media headlines, this was not sustained.

We also looked at how VPN use compares with other online privacy methods and tools, and explored the overlap between them.

While VPN usage has grown by 14% since 2017, the popularity of other privacy methods such as deleting cookies and using private browsers has stayed at a consistent level.

We can see that VPN users are more likely than the average internet user to take further measures to ensure their online privacy.

Disturbingly, 25% of the world’s internet users do not take any privacy measures whatsoever.

A theme that emerged was that while there is a broad awareness of the importance of protecting privacy, it’s not always clear to internet users what tactics they should use.

Even among those we categorized as “privacy-conscious” internet users, only a third use VPNs for example.

The following visualisation shows the level of concern demonstrated by U.S./UK internet users towards different groups that pose a threat to their personal data.

Cybercriminals/hackers constitute the largest group of concern (66%), when users think about threats to their personal data.

The immediacy of the consequences presented by cybercriminals make for an obvious, stronger reaction.

However, with ISPs the focus of only 28% of U.S. and UK internet users’ concern, it suggests the majority may be unaware of the scale of data mining that takes place.

Data Sample: All figures in this report are drawn from GlobalWebIndex’s online interviews of over 688,000 internet users aged 16-64 across 46 markets.

The respondent sample selection was fixed to set quotas on age, gender and education level to ensure our research was reflective of online populations of each market, not its total population.

Data Collection: The respondents complete an online questionnaire that covers a wide range of questions about their lifestyles and digital behaviors.

The first custom survey, based on 2,011 and 2,597 internet users in the U.S. and the UK respectively, was conducted in August 2019. This was predominantly themed around data security.

A second custom survey themed around VPNs, was conducted in January 2020 involving 2,405 and 2,426 internet users in the U.S. and the UK respectively.