AirVPN is a fantastic choice if privacy or torrenting is your main priority. It uses tested encryption and runs exclusively on OpenVPN. The apps are fast and secure, but they can be hard to use, especially for beginners. AirVPN is a reliable choice for advanced users though.

An independently-operated VPN founded by activists, hacktivists, and hackers sounds almost too good to be true – or is it?

That’s the backstory of AirVPN, which promises its users “the air to breathe the real internet”, so we decided to put it to the test for ourselves.

In our AirVPN review, we answer important questions such as:

You’ll find the answers to these, and many more, below our brief overview of AirVPN.

Read on to see if AirVPN is the right choice for you, starting with its VPN connection speeds.

AirVPN was formed in Italy in 2010 by a small group of activists and hackers, with the help of two lawyers.

Originally it was operated by Iridium, a satellite communications company, but AirVPN took over in November 2012. Paolo Brini is listed as the current owner of AirVPN, which is operated from Perugia (Italy).

Even today, AirVPN is operated exclusively by activists and ‘security issues aware persons’. It’s still based in Italy, putting it within reach of EU data retention laws.

AirVPN’s logging policy is fairly vague, so we contacted customer support for clarification.

After speaking to them we feel confident that AirVPN doesn’t monitor anything you do while connected to the VPN. It only collects ‘technical data’ for server maintenance purposes, but you can request for this to be deleted at any point.

AirVPN also doesn’t log any information that could be used to personally identify you, such as date/timestamps or your IP address, making it one of the most privacy-friendly VPN services out there and mitigating its Italian jurisdiction.

While AirVPN isn’t reaching the exceptional peak speeds of some of the fastest VPN services, it does stand out for the sheer level of reliability on offer.

AirVPN is equally as fast on both same-country connections and across longer distances, so you’ll be able to do pretty much anything you want to while connected to the VPN without breaking a sweat.

When connected to AirVPN:

AirVPN’s upload speeds were quick too, coming in at almost 75Mbps when connected to a VPN server in the same country – perfect for torrenting.

It’s not an ideal VPN for keen gamers, though, with ping times hovering around 18ms, even when we were connected to a VPN server in the same city as us.

If you’re based in the UK, here are the average speeds you can expect from AirVPN connecting out to a handful of popular locations:

To read more about how we test VPNs, you can read our full speed testing methodology here.

AirVPN offers one of the smallest server networks we’ve ever seen from a premium VPN service.

AirVPN only provides 200 individual VPN servers, which could lead to server congestion at busier times. Thankfully the ‘server load’ section on the app makes it easy to see which locations are approaching capacity. 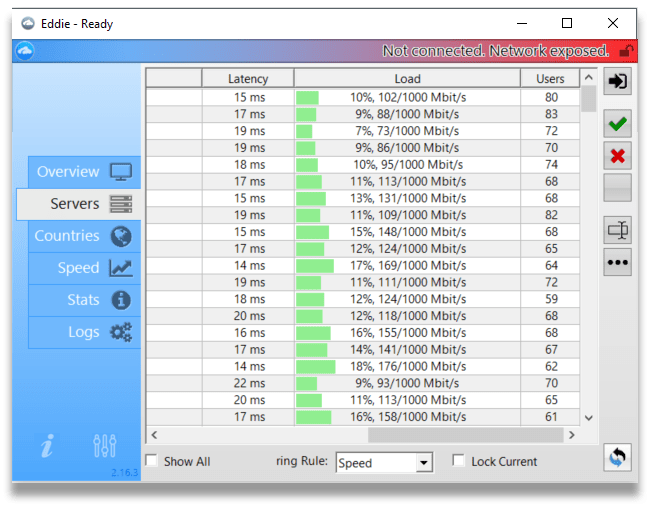 It’s clear that AirVPN is targeting the US market, with 37 servers in ten cities across the country. US-based users can choose from AirVPN servers in:

There’s also three city-level AirVPN servers in the UK (London, Maidenhead, and Manchester) and Canada (Montreal, Toronto, and Vancouver). Other countries with city-specific choice include Germany, Spain, and Sweden.

Europe has the best AirVPN coverage with 153 servers spread over 15 countries, while Asia is limited to Japan, and Singapore.

AirVPN used to maintain a Hong Kong server, but this was removed in July 2020 following escalation of China’s digital surveillance in the region.

South America is covered only by VPN servers in Brazil, while Africa is ignored by AirVPN altogether.

Great VPN for torrenting but not streaming

Because there are no AirVPN servers optimized for accessing streaming sites, it’s a case of trial and error, and we haven’t been able to watch Netflix through its US servers for several months now.

It’s the same story with BBC iPlayer, which has been inaccessible via AirVPN’s UK-based servers since we can remember. If accessing this service is important to you, check out our top VPNs for BBC iPlayer here.

Surprisingly, given the difficulty we’ve had accessing BBC iPlayer or Netflix, AirVPN was one of the few providers to work with Disney+ at its launch. Which is great to see.

Thankfully, on AirVPN’s website there is a list of ‘blocked websites’ which users can check to see if the situation with these streaming sites ever changes.

AirVPN is, however, a strong choice for anonymous torrenting and P2P activities.

Advanced torrenters will also like that AirVPN allows port forwarding on up to 20 ports simultaneously, to speed up transfers even more. You can do this in the ‘Client Area’ of the AirVPN website. Read more about AirVPN’s remote port forwarding here.

Works in China with some manual configuration

Currently, the only way to connect to AirVPN in China is to use the OpenVPN protocol over SSL, which encrypts your OpenVPN ‘fingerprint’ to make it undetectable. This is simple enough to do on desktop but more complex on mobile.

If you want to connect out from China on mobile devices using AirVPN you’ll have to install OpenVPN files and do some manual configuration – there are step-by-step guides on the website to walk you through the process.

AirVPN should work in other high-censorship countries, such as Turkey and Iran, due to its range of additional obfuscation tools such as SSH/SSL tunneling and access to Tor through the VPN.

Its limited server network is bad news for speed, though, as it means you may find yourself having to connect to an AirVPN server far away from your physical location.

Compatible with all major platforms & routers

There is also an AirVPN setup guide for iOS, however, it requires installation of third-party OpenVPN software. We advise iOS users to use VPNs with custom apps for iPhone or iPad instead.

AirVPN is also supported on DD-WRT, pfSense, Tomato, and AsusWRT routers, but again has to be manually installed and configured. This means AirVPN isn’t a very good choice if you want a plug-and-play VPN service.

You can have up to five simultaneous connections, too. Other providers offer more, but this should cover most people’s devices.

AirVPN offers a native VPN app for the Amazon Fire TV and Fire TV Stick. It can also be used with a range of other games consoles and streaming devices either by connecting them to a configured router or sharing the VPN connection from another device running the software.

There are no manual set-up or troubleshooting guides for any of these devices, but you can find lots of useful hints and tips in AirVPN’s online forums.

AirVPN unfortunately doesn’t offer any browser extensions for Google Chrome or Mozilla Firefox, which is hardly surprising given its lack of native apps for a broad range of devices. Some of its rivals, such as ExpressVPN, offer full-featured VPN extensions for all popular browsers.

One of the most secure VPN services we’ve seen

AirVPN is a fantastic choice if pure privacy is your priority. Encryption is via top cipher AES-256 and the software runs exclusively on OpenVPN, which offers the best security/performance balance.

The VPN kill switch is an essential feature to protect you in case of connection drops, and AirVPN also operates its own DNS servers, keeping your personal information confidential. 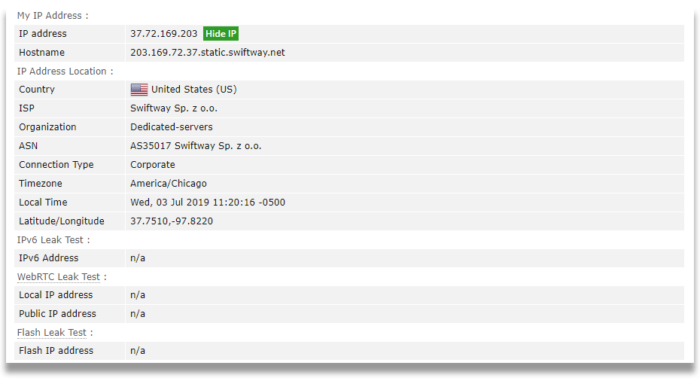 AirVPN’s protection against DNS, IPv6 and WebRTC leaks was also proven to be 100% effective in our latest tests.

You can use AirVPN to access the Tor browser, giving you an extra layer of encryption should you need it. The desktop app also offers ‘doublehop’, a feature that regularly switches your IP address to prevent your location from being tracked.

It would be nice to see WireGuard added in the future, but while OpenVPN continues to work very well it’s hard to argue the addition would be necessary

How to Install & Set Up AirVPN

AirVPN’s settings list is separated into tabs, each with loads of different options. This is where it could get confusing for less experienced VPN users, so we like that there’s an option to reset all settings to default just in case.

VPN server selection is way more difficult than it needs to be – the list is long and there’s no search feature. Even worse, each VPN server is named after a star, which gets frustrating after a while when all you want to do is choose a city and connect.

AirVPN says that its customer service isn’t outsourced in order to provide “high-quality support”, however a lack of live chat and slow email replies can be frustrating when you just have a simple question.

We like the extensive knowledge base on AirVPN’s website though, which includes an extensive FAQs section divided up by topic. There’s also a whole host of AirVPN community forums covering every topic you could think of, so you may find you don’t actually need to contact the support team very often.

Each AirVPN pricing plan includes the same features but they get cheaper on a monthly basis the longer the subscription you sign up for.

All plans have 3-day money-back guarantee

AirVPN offers a free trial, which can be obtained by sending a message to the support team and using the coupon code they send you. We received in less than a day, but people have reported on the forums that they were left waiting for a code for over 24 hours.

There’s also a money-back guarantee, however this is only valid for three days, which is stingy compared to the 30 days offered by most other VPN services. It is ‘no questions asked’, thankfully, and refunds are usually back in your bank within two working days.

AirVPN accepts the largest range of payment methods we have seen from any provider. This includes most major credit cards, PayPal, and a whole array of cryptocurrencies. Lots of international options are also accepted, such as Alipay and Giropay.

Do We Recommend AirVPN?

We do recommend AirVPN, but with one serious warning: AirVPN is absolutely not a VPN for beginners.

In fact, when talking about VPNs that we actually recommend, AirVPN is probably the most intimidating and unfriendly of all. It’s still super secure and produces fast download speeds, but be warned that it takes some getting used to.

It's our highest-scoring VPN for a reason: ExpressVPN does a lot of things well, but ease of use may be top of the list. ExpressVPN is so simple anyone can use it - and get great performance while doing so, too. Read ExpressVPN review

If streaming is important to you then you shouldn't download AirVPN. CyberGhost is a much better alternative, thanks to its unflinching access to Netflix, BBC iPlayer, and more. Read CyberGhost review