Downloading and sharing torrent files is completely legal. However, torrenting copyrighted material without permission is illegal in most countries including the United States, United Kingdom, Canada, and most European states. If caught, you could receive a financial penalty or even a prison sentence. 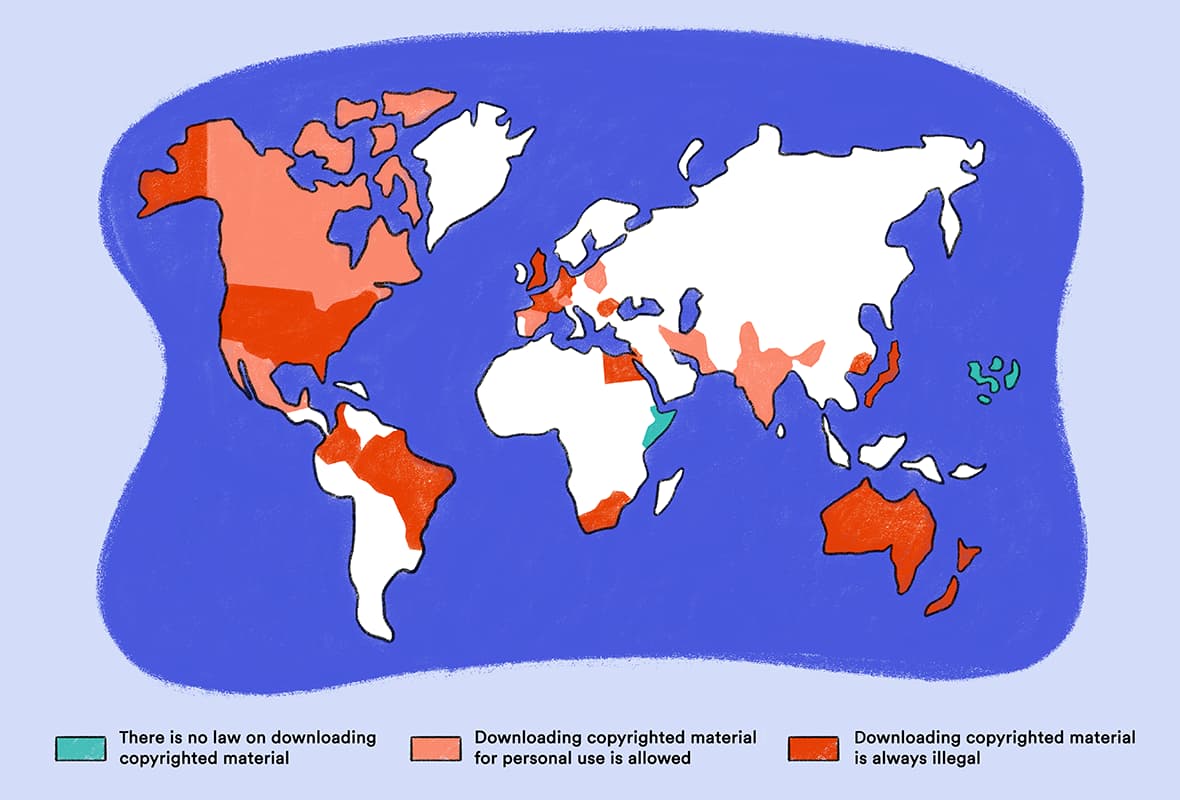 In this guide, we break down global torrenting laws by country and explain exactly what happens if you get caught file-sharing copyrighted works.

EXPERT ADVICE: To hide your IP address and file-sharing activity from your ISP and other peers in the torrent swarm, use a secure, no-logs torrent VPN like ExpressVPN to torrent securely. Also, use a safe torrent client like qBittorrent or uTorrent.

DISCLAIMER: This guide is intended to help users avoid accidentally breaking the law. While it has been thoroughly researched, we are not legal professionals. To clarify the laws in your country, seek professional legal advice.

Where Is Torrenting Legal and Illegal?

Torrenting itself is legal everywhere. It’s just a form of peer-to-peer file sharing, and torrent files are simply a type of document used in the process. There isn’t a single country where downloading torrents or using torrenting websites is illegal in itself.

However, the contents of many torrent files breach copyright laws, which vary by country.

It is illegal to torrent copyrighted files in the US, UK, Australia, New Zealand, and most states in the European Union.

Unfortunately, most popular torrenting sites host and distribute copyrighted content. If you download films, music or television files that are not in the public domain, there’s a good chance you could be breaking copyright laws.

There are two major international treaties on copyright: the Berne Convention and the Universal Copyright Convention. Countries that have signed these treaties agree to enforce each other’s copyright laws, and are more likely to pursue criminal charges.

Depending on where you live, the consequences of being caught torrenting copyrighted files can vary from small fines to jail time. However, if you’re downloading publicly-owned files from torrenting websites, you are not breaking the law.

Here’s a table comparing torrenting and copyright laws in 23 countries around the world. You can use it to see which countries enforce laws on torrenting, and which do not:

*only some kinds of copyrighted material can be downloaded for personal use. 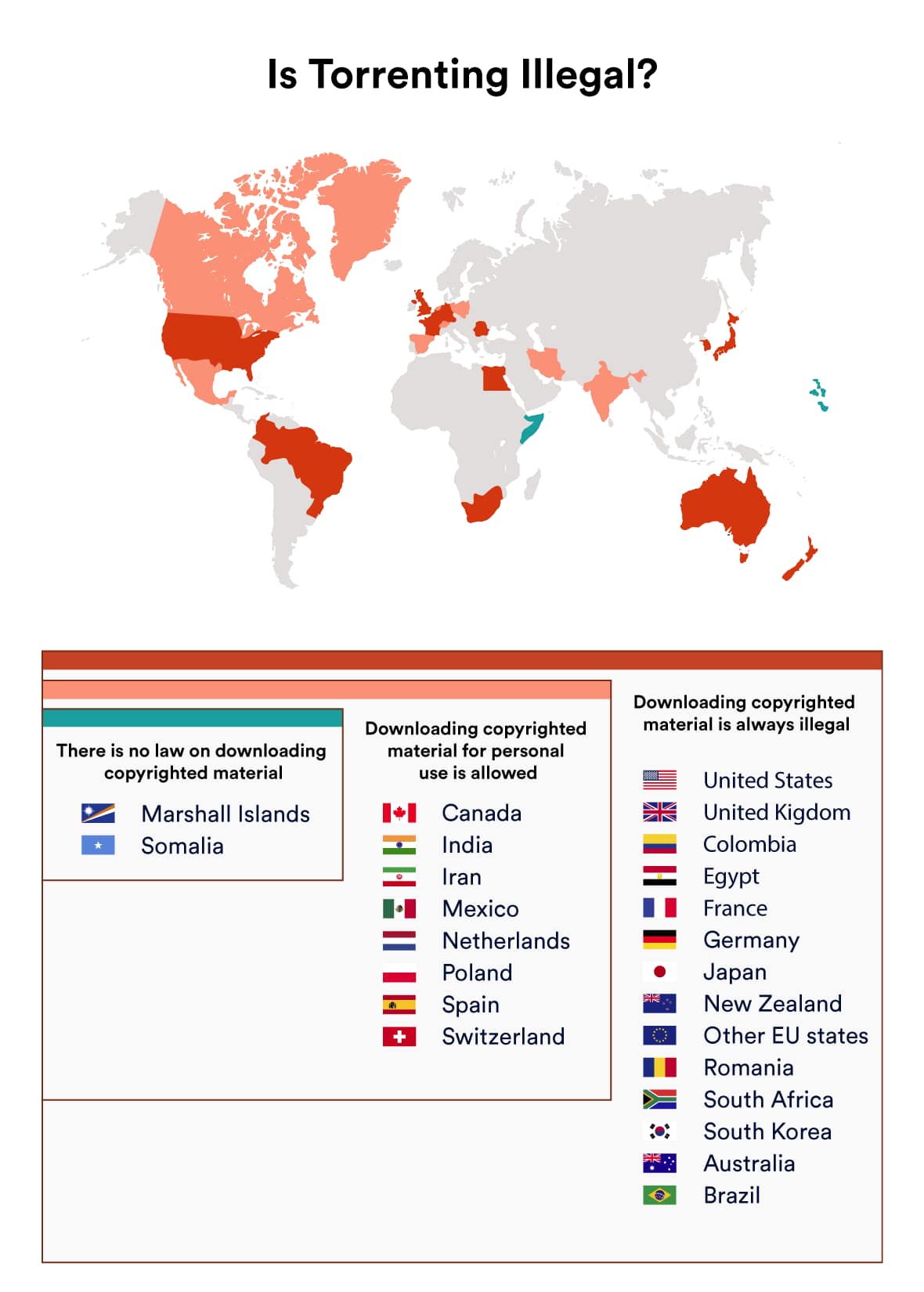 This map shows how torrenting laws differ across the world.

Torrenting Laws In the United States

Downloading and sharing copyrighted material is illegal in the United States. There are two laws that affect torrenting and P2P activity in the US:

If you’re torrenting illegally, your ISP will send you a warning letter and probably start throttling your connection speeds. If you’re caught repeatedly and found guilty in legal proceedings, you could be subject to criminal penalties including a $250,000 fine and up to five years in prison.

Torrenting Laws In the United Kingdom

Torrenting copyrighted material is illegal in the UK. In 2010, the UK government passed the Digital Economy Act to help curb illegal torrenting.

This law forces major UK ISPs to notify customers caught downloading torrents. The notification comes in the form of a cease and desist order.

The legislation also gives UK ISPs the right to throttle speeds and even disconnect users from the internet altogether.

Downloading and sharing copyrighted material in Australia is illegal. The Copyright Amendment (Online Infringement) Bill of 2018 allows ISPs to block torrenting sites classified as ‘pirate’ sites as well as any related mirror and proxy sites. 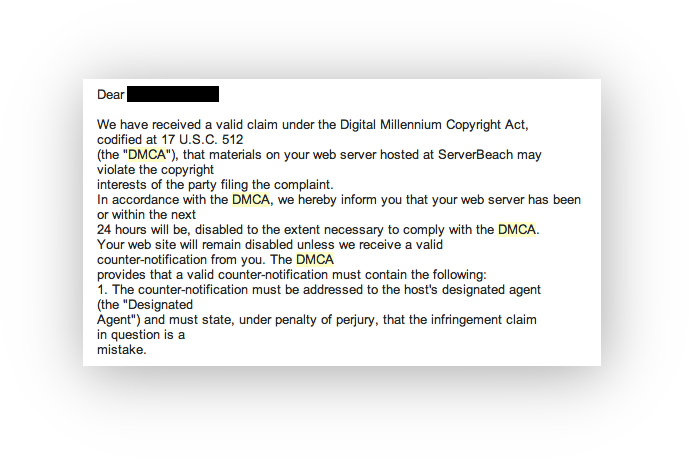 An example of a DMCA claim sent to an Australian user.

Many popular BitTorrent websites like ThePirateBay, Torrentz, and TorrentHound are therefore blocked. Overall, almost 1,000 file-sharing domains are blocked by ISPs like Telstra.

Since January 2014, the Copyright Modernization Act has required Canadian ISPs like Bell to send notices to copyright violators using their services.

Canadian ISPs are legally entitled to store download and upload data from violating subscribers for at least six months.

Which Countries Allow Torrenting for Personal Use?

There are two countries with no laws banning the download of copyrighted material: the Marshall Islands and Somalia. This doesn’t mean it is legal, just that there is no legislative framework for enforcing copyright claims in these countries.

There are a further eight countries where torrenting copyrighted material is allowed for personal use:

What Is the Punishment for Torrenting?

Even in countries where torrenting copyrighted material is illegal, the consequences vary a lot.

If you get caught torrenting copyrighted content, you could receive a short ban from using your ISP (internet service provider) or a small fine. In some countries, you could be looking at almost a decade in prison.

The United States applies a three-strike rule to anyone caught torrenting copyrighted content. After three strikes, content owners can begin criminal proceedings. After this, anyone found guilty can risk up to five years in jail and a fine of up to $250,000.

Torrenting involves both uploading and downloading files, so users often expose themselves to charges of distributing copyrighted material as well as downloading it. Even so, the maximum penalties listed here are very unlikely to be brought against individual torrenters.

Here’s a table comparing the legal punishments for torrenting copyrighted material in different countries across the world:

The legal penalty for torrenting can vary from a small fine to eight years in prison.

What Actually Happens If You Are Caught Torrenting Copyrighted Material?

If you have been caught torrenting copyrighted material, you will probably find out by a letter from your Internet Service Provider (ISP). The next step varies significantly by country, but if it is your first offense you will normally just get a warning, rather than any legal response. 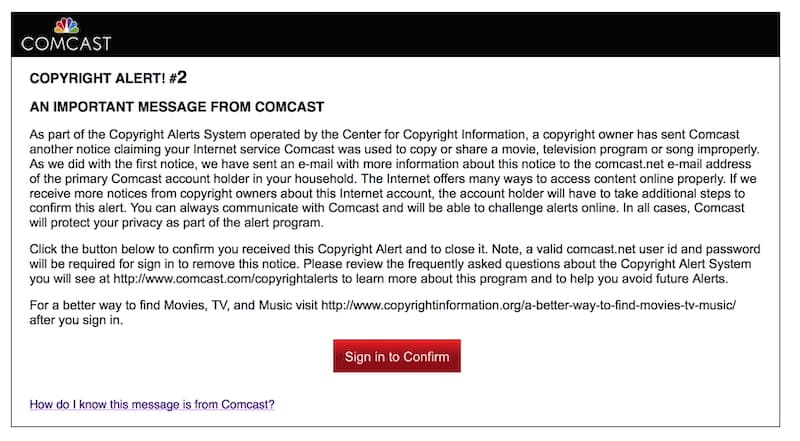 A copyright notice sent to a Comcast customer.

Copyright trolls identify users from their IP address, which is publicly visible when torrenting. Using your IP address, they can identify and contact your ISP, who will warn you and ask you to stop torrenting before giving your identity to the copyright holder.

If you’ve received a legal threat, you should seek proper legal advice immediately. They will be able to help you respond appropriately.

What Is the “Three Strikes” System?

In the last decade, lots of countries have implemented a “three strikes” policy towards piracy. This policy states that users caught torrenting get three warnings from their ISP, and if they don’t stop they will receive either a fine or temporary internet ban.

The policy has been scrapped in most countries, though, including the US and much of the EU. The two most significant countries that still use this system are South Korea and New Zealand.

Will You Get Caught Torrenting?

ISPs and copyright trolls are constantly monitoring P2P networks like Bittorrent and uTorrent to identify who is downloading and sharing copyrighted files. If you live in the US, UK, Australia, or Europe and you torrent these files without using a torrenting VPN, it’s quite possible you will get caught.

Copyright trolls are particularly prevalent in the United States. These are third-parties – usually law firms – that set out to catch copyright violators on behalf of content owners. They can lurk in torrent swarms, even seeding files themselves as bait.

We do not endorse the use of torrenting websites or software to download copyrighted material. There are many sites with free and legal content available through the public domain or creative commons license.