VPN 360 is a free, mobile-only VPN for iOS and Android. We don't recommend using it though: it doesn't work with Netflix, its speeds are unreliable and its security and privacy is weak. There are much safer and more transparent providers available.

One of the best and easiest ways to access all your favorite content for free? That’s what VPN 360 claims to be.

But is it true? To cut a long story short: no.

We tested VPN 360 to find out for sure. In this VPN 360 review, we’ll be answering your most burning questions, like:

Windscribe is a safe and free Netflix VPN

We test and review every free VPN in seven key areas. Here’s how VPN 360 performs in each category:

When we looked into VPN 360’s background a few different names arose.

VPN 360 doesn’t have a website, so the Appke App Store and Google Play Store are the only available sources of information.

The Google Play Store and Apple App Store both list VPN 360 as being owned by the same company that developed Touch VPN (which we’ve reviewed here), TouchVPN Inc.

However, the support email brings up another company, Infinity Software, which claims to be “a small company based in Hong Kong focused on user experience (UX), great design and development of web and mobile applications.”

Finally, the iOS privacy policy redirects to Aura, the US company that owns Hotspot Shield and Betternet.

In 2015, Touch VPN was bought by AnchorFree, which later rebranded to Pango, and then Aura – the same company that own’s premium VPN service Hotspot Shield. Aura’s privacy policy mentions VPN 360 as one of its products.

But where does Infinity Software come into the equation?

It’s definitely not the most clear cut and transparent VPN service we’ve reviewed.

Neither the US nor Hong Kong are ideal jurisdictions for a VPN to be incorporated in either: the US due to its involvement in the international intelligence-sharing alliance Five-Eyes, and Hong Kong because of increasing pressure and influence from China.

Our independent investigation into free apps actually confirmed a link between VPN 360 and mainland China.

A look at VPN 360’s logging policy will shed some light on what that means for you.

However, Pango admits to logging URLs visited through its VPN servers – but not in combination with anything that identifies an individual. It does pass on your approximate location to advertisers, though.

Pango’s policy also states that the VPN collects connection timestamps and the bandwidth consumed per session, as well as device hashes. It doesn’t store user IP addresses beyond your session.

However, VPN 360 says that it “may become necessary to temporarily maintain usage data to assist in debugging a problem with the service.” This usage data may include the date and time of your login and the IP addresses you visited. VPN 360 claims this information is deleted once the issue has been resolved.

More worryingly, VPN 360 is willing to disclose “personal information, including your usage data, to governmental authorities or agencies . . . if there is a good faith belief that such collection or disclosure is required by law.”

This suggests that VPN 360 will enable logging if requested to do so. 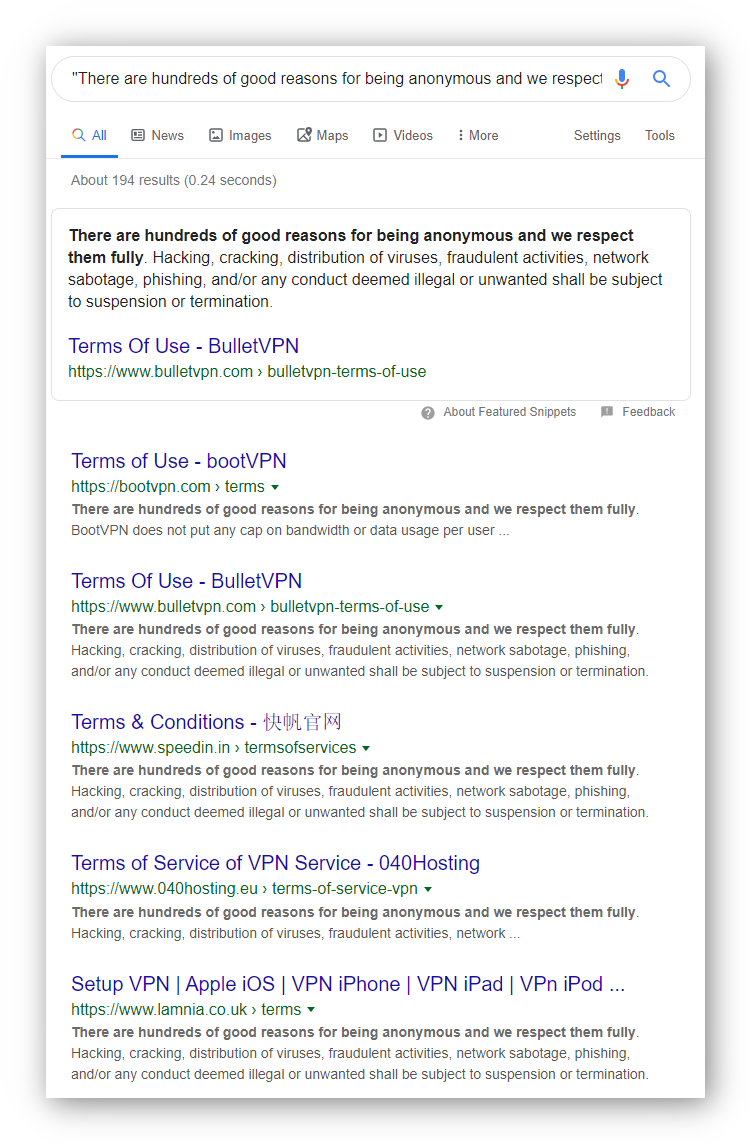 We can’t trust VPN 360 fully until it irons out the confusions over its multiple privacy policies and copy-and-pasted Terms of Service.

Even then, Pango’s logging policy is far from perfect. On the basis of this alone, we don’t think you should use this VPN.

VPN 360’s Android app and iOS are wildly different when it comes to speed.

Let’s start with the good news – the iOS app is surprisingly fast, even if there is only one server location available for free users.

Connecting from the UK to the free US server we experienced quick speeds, so if you live in North America it should even quicker.

Those kinds of speeds are good enough for a range of online activities including browsing, streaming, and torrenting.

Now for the bad news.

Under 2Mbps levels of slow.

That will certainly affect everything you do online. We’re not sure why there’s such a massive discrepancy between the apps, but it seems the VPN 360 team doesn’t either – it failed to reply to our query about it.

VPN 360’s only server location available to free users is the US.

This is far from ideal for optimizing speeds and accessing geo-restricted content.

Confusingly, the apps do come with the full server locations list, but if you click on any of the locations the VPN will prompt you to upgrade to a premium subscription.

While most free VPN services don’t offer huge server networks, most come with several options to choose from.

TunnelBear, for example, provides free VPN servers in 23 countries around the world.
Even VPN 360’s premium subscription only comes with 10 locations and costs a steep $11.99 a month.

Doesn’t work with Netflix & not secure enough for torrenting

It’s not surprising that VPN 360 doesn’t work with major streaming services like Netflix and BBC iPlayer.

For a start, it doesn’t have any server choices, so if the only free server fails to grant you access to your favorite shows you’ll be left with no other options.

Unfortunately, most free VPN services don’t work to unlock Netflix and the like – they simply don’t put resources into getting around the streaming services’ VPN crackdowns and blocks.

If you really want to use a VPN to stream the world’s content you’ll have to pay for one – here’s a list of the best VPNs for streaming to help you out.

While there are no restrictions on torrenting with VPN 360, we wouldn’t recommend it.

There’s no VPN kill switch, which could leave your private P2P activities exposed to your ISP or other third parties.

The lack of transparency surrounding the VPN protocols used and the confusing logging policies are also reasons to not risk it.

Try out these free VPNs for torrenting instead.

Doesn’t have the tools to work in China

It’s unlikely that VPN 360 will work reliably in China.

There’s no obfuscation tools to mask VPN traffic, and so it would likely get blocked by the Great Firewall.

If you’re traveling to China you’ll have to get a VPN that’s designed for beating the censors, and the most effective will cost you.

ExpressVPN is one of the most reliable VPNs for China.

We don’t recommend VPN 360 for other high-censorship countries either due to the lack of server location choice and missing VPN kill switch.

VPN 360 is a mobile-only VPN with custom apps for Android and iOS.

There’s no way to use it on Windows, MacOS, or Linux computers.

And forget about installing the VPN on your router.

Lack of transparency about encryption, no VPN kill switch

While the iOS app does give users an option to connect through IKEv2 – a safe, secure, and fast protocol – there isn’t any information readily available about the Android app.

The iOS app also comes with ‘Auto mode’, ‘Stay connected mode’, and ‘Fast mode’ next to the IKEv2 connection option. There is no contextual information given about these modes and whether they use a different protocol or not. 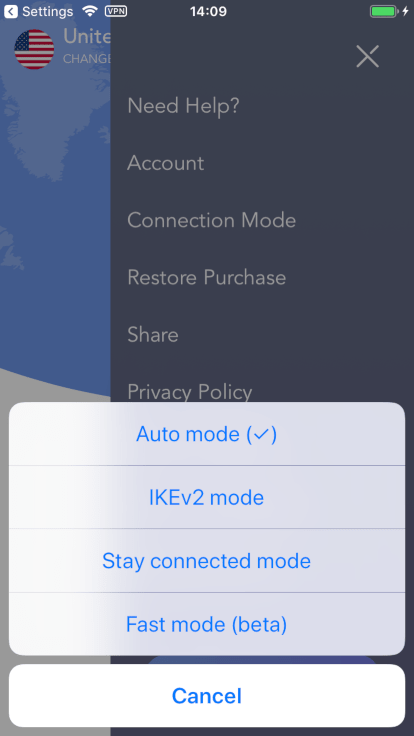 There’s also no information given about the type of encryption ciphers VPN 360 uses.

On top of the lack of transparency about the technology behind VPN 360 the apps don’t come with a VPN kill switch.

We consider a kill switch to be essential – it protects your private data in the event of a sudden VPN disconnect.

Thankfully we didn’t experience any IP, DNS, or WebRTC leaks during our tests: 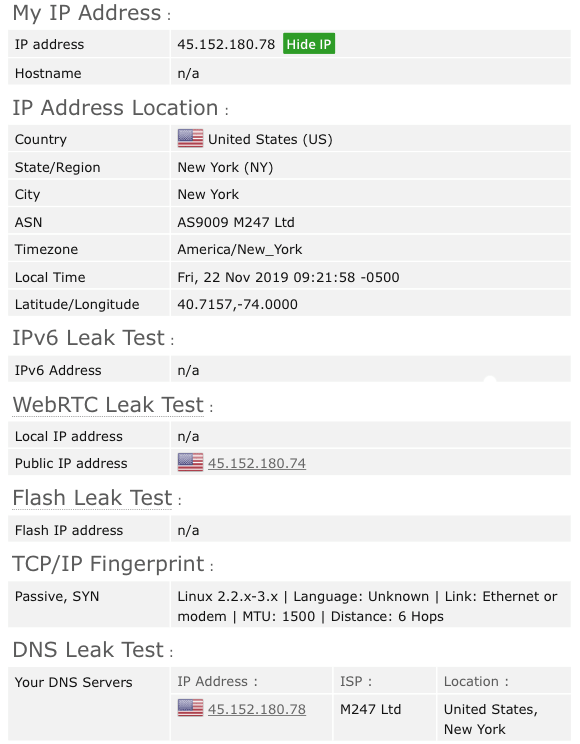 We test from the UK and connected to VPN360’s free US server.

Super easy to use, but has annoying pop-ups

It doesn’t take much technical knowhow to install and use VPN 360’s custom VPN apps for Android and iOS.

All you need to do is download them from the relevant app store, tap through a couple of installation prompts, and click the connect button in the center of the app.

There is a server location list within the app but there’s no point looking at it as free users only have access to the United States server.

The iOS app comes with some minimal settings (VPN protocol selection), while the Android app has none at all.

Aside from the lack of security features our biggest frustration with the VPN 360 apps is the constant pop-up ads. They’re intrusive and disruptive.

The ‘Fast mode (beta) connection mode for iOS didn’t work for us either.

There’s no official website for VPN 360, nor are there any FAQs or troubleshooting tips on the Google Play Store or iOS App Store entries.

It’s a given that VPN 360 doesn’t have live chat support, but there is a support email provided.

While we didn’t have much hope for a response to our questions we were surprised to receive one after just an hour or so.

The VPN 360 email support team answered most of our questions comprehensively, but it’d be better for there to be a dedicated website with a support page to save users the hassle of getting in touch over simple queries.

No. The huge differences between its two apps, the inadequate security features, and lack of a website mean we cannot recommend VPN 360.

There are far safer and more transparent VPNs available.

If you’re after a free VPN you can use for extended periods of time ProtonVPN is a great choice - there’s no VPN data cap. ProtonVPN is really safe and secure, and the speeds aren’t bad either. Read ProtonVPN Free review

While TunnelBear does limit users to just 500MB per month it comes with 23 free VPN server locations. That’s ideal if you need occasional access to restricted websites. Read TunnelBear review