The Global Cost of Internet Shutdowns

Intentional internet disruptions around the world cost the global economy billions of dollars every year. Our live internet shutdowns index measures the financial consequences in real-time and provides information on previous years' data.

UPDATED 13 July to include the latest financial impact of internet shutdowns in 2021, including data on restrictions in Cuba. This page is updated frequently as new disruptions occur.

The Global Cost of Internet Shutdowns index tracks the the total economic impact of every major internet blackout and social media shutdown around the world as it happens.

As well as the live tracker showing the total cost of disruptions for the year to date, you can access annual reports dating back to 2019. Use the page navigation to jump to the relevant section to see that year’s key findings and a link to the annual report, or use the following links to jump straight to those sections:

From 2020 onwards, our data includes additional human rights abuses perpetrated during these disruptions to illustrate the wider context of these incidents.

We calculate the economic impact of disruptions using the COST tool by collating every national and region-wide incident globally, and determining the duration and extent of the restrictions.

This tool, developed by internet monitoring NGO Netblocks and advocacy group The Internet Society, uses indicators from the World Bank, ITU, Eurostat and US Census.

In both our live tracker and annual reports, we include social media shutdowns, internet blackouts and severe throttling in our calculations. These types of disruption are defined as follows:

Our goal in doing this work is to keep public attention focused on just how damaging internet shutdowns truly are. This damage is both direct, in terms of the economic and human cost, and indirect, in that it forces people to use unsafe VPNs to try to circumvent the restrictions imposed upon them. We are also investigating the companies that provide the technology that make shutdowns possible.

See our live tracker of VPN demand surges around the world

Additional references can viewed in this Source Appendix document.

The following table shows the total economic cost of all major internet shutdowns to-date in 2021 by country where the disruptions occurred. Ranking is greatest to least economic impact, measured in USD.

Myanmar has been convulsed by protests against a military coup in February. After an initial internet blackout, the ruling military junta blocked access to Facebook in the wake of the coup in order to “maintain stability”.

Since then the people of Myanmar were subject to rolling restrictions with social media blocked during the day and a nightly internet shutdown that only ended on 27 April after 72 consecutive nights. Peaceful demonstrations turned deadly as the authorities cracked down, killing scores of protesters.

With the growing death toll now thought to be over 700, with children among those killed by security forces, mobile internet was cut completely on March 15. On April 1, the military junta ordered a further shutdown of wireless internet services.

India is again a world leader in self-inflicted economic damage from internet shutdowns. The Modhi government continued to throttle internet speeds to effectively unusable 2G levels in Kashmir until early February. It also implemented a costly blackout during the massive farmers’ protests outside Delhi in late January.

Authorities in Nigeria shut down Twitter on June 5 in retaliation for the removal of a tweet by President Muhammadu Buhari for breaching the social media platform’s rules.

In Uganda, authorities shut down social media in January ahead of the presidential elections. The disruptions helped prevent the spread of information about brutal crackdowns on opposition rallies that left at least 28 dead and many hundreds arrested. 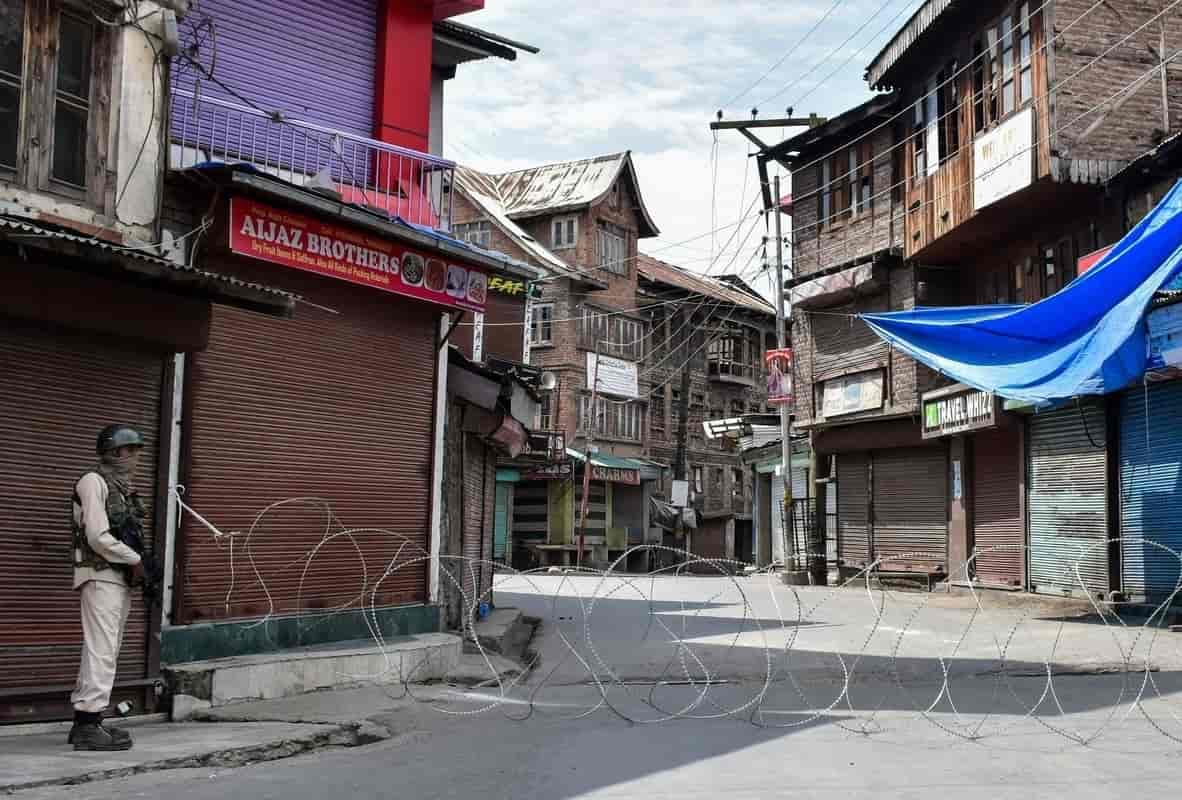 Soldier standing guard in a Kashmir street divided by barbed wire in Aug 2020 on the anniversary of the start of the internet shutdown.

The 2020 annual report, published on Jan 4 2021, analyzed every major intentional internet shutdown in 2020 and calculated the cost to a world economy already devastated by the pandemic to be a further $4 billion. It also identified additional human rights abuses associated with the blackouts.

Read the full Global Cost of Internet Shutdowns in 2020 report.

India continued to restrict internet access more than any other country. Most were highly-targeted short blackouts, affecting groups of villages or individual city districts, and so were not included in this report, which focused on major disruptions. The true economic cost is therefore likely to be even higher than the $2.8BN we calculated.

Authorities lifted restrictions in Kashmir in March 2020, seven months on from a controversial decision to strip India’s only Muslim-majority region of its autonomy. However, after the restrictions were lifted authorities continued to severely throttle internet speeds, with citizens only able to access 2G connections.

During the longest internet shutdown in a democracy, the arbitrary arrest of prominent Kashmiris became widespread.

In Belarus, authorities restricted internet access in August and September following a controversial presidential election as president Alexander Lukashenko attempted to stifle protests and calls for a re-run of the vote.

During the internet restrictions, there were multiple reports of police brutality, torture, and attacks on the press.

Meanwhile in Yemen, damage to an undersea cable in January reduced the country’s internet capacity by 80%. Some claimed it was a deliberate act of sabotage by the Houthi rebels that control large swathes of the country, however this remains unconfirmed.

The 2019 annual report, published on Jan 7 2020, analyzed for the first time every major intentional internet shutdown over the course of a year and calculated the global cost of shutdowns in 2019 to have been over $8 billion.

Read the full Global Cost of Internet Shutdowns in 2019 report.

In Iraq, internet blackouts were imposed in October after anti-government protests flared due to rising unemployment, failing public services and corruption. The disruptions were part of a brutal government crackdown that led to at least 220 deaths and injuries to many hundreds of people.

Sudan was rocked by unrest throughout the first half of the year after protests erupted calling for Omar al-Bashir, who had been in power for thirty years, to step down. Extended social media shutdowns were imposed as a response. Protests continued following a military coup, which prompted internet blackouts intended to prevent the flow of information, such as the recovery of at least 40 bodies from the River Nile.

Internet disruption cost African economies over $2 billion in total during 2019.

In India, the most significant disruptions were in Kashmir, where after intermittent shutdowns in the first half of the year, access was blocked from August onwards. The Modhi government attempted to justify the blackout on national security grounds due to unrest following the controversial decision to strip India’s only Muslim-majority region of its autonomy.

Elsewhere, violent reactions to the Citizenship Amendment Bill, which was viewed as specifically anti-Muslim, prompted blackouts in December across parts of several northern regions of India.

We review every documented internet and social media shutdown globally in a given year.

We include deliberate national shutdowns along with regional disruptions that are on a sufficient scale to be economically significant.

The economic cost of each shutdown is calculated using the Netblocks and the Internet Society’s Cost of Shutdown Tool, which is based on the Brookings Institution method. Regional shutdown costs are derived from the region’s economic output as a proportion of national GDP.

Partial outages are calculated as a proportion of the above costs based on the most up-to-date internet market-share information publicly available for the affected country.

Internet user data is sourced from the World Bank and government reports.

Additional references can viewed in this Source Appendix document.