StrongVPN started back in 1995 selling dedicated servers and in 2005 launched its first VPN service.

It’s one of the oldest VPN companies around, but is that enough to make it one of the best VPNs?

We tested StrongVPN extensively to answer common questions like:

After reading our StrongVPN review, you’ll know whether this VPN is the right one for you.

The key takeaways from our in-depth StrongVPN test are summed up in the box above, but if you want to get into the specifics then there’s plenty more below.

The StrongVPN VPN service was launched in 2005 by Strong Technology, LLC. StrongVPN has changed hands a number of times over the years, most recently in 2019 when it was acquired by the public company J2 Global.

StrongVPN Technology and J2 Global operate under the jurisdiction of the USA, which is one of the least privacy-friendly locations in the world.

StrongVPN does state that it will comply with valid subpoena requests, but it can’t provide information that it does not have.

That’s because StrongVPN doesn’t collect any customer activity logs so there’s no way of tying down any web activity to an individual user.

StrongVPN has a very strict zero-logs policy in place. It states that it doesn’t collect or log any traffic or use of its VPN service. This includes even basic connection metadata such as timestamps, chosen server or bandwidth consumed.

Because it collects absolutely no customer data, there is no way any of your web browsing activity can be traced back to you as an individual, which is great news.

StrongVPN’s speeds are more than fast enough for HD streaming, both for same-country connections and longer distance ones. You can expect very quick speeds connecting out to the US from Europe, too.

When connected to StrongVPN:

Latency was rather high though, at 16ms on same-country connections. Considering some VPN  services registered ping times of less than 1ms, keen gamers should take a look at these VPNs.

Upload speeds were very fast too, which is great news for torrenters.

We tested StrongVPN’s average speeds connecting from the UK out to a range of locations around the world:

Find out more about our VPN speed testing.

StrongVPN’s network leans towards the small side, with around 950 servers spread across only 26 countries.

We like to see VPN services serve many countries – ideally 50 or more – and the fact that StrongVPN doesn’t have servers in countries like Argentina, Greece, Indonesia, or New Zealand isn’t ideal.

StrongVPN also operates own its own servers just like its ‘sister’ VPN IPVanish. 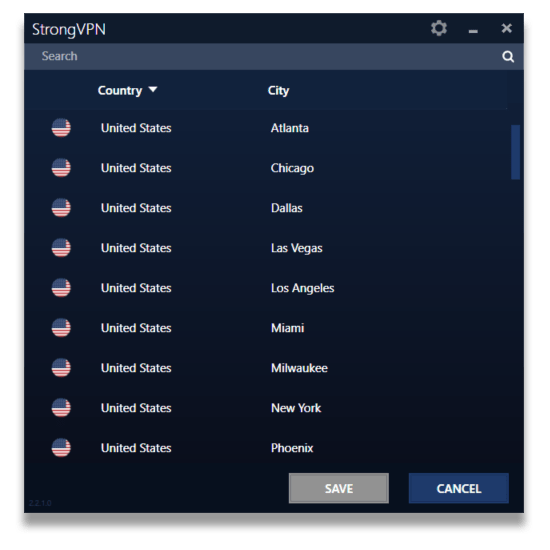 Multi-city servers can be found in:

The only Asian servers you will find are located in Hong Kong, Japan and Malaysia. South America is served by just Brazil, and there aren’t any servers in Africa.

You can see the complete list of StrongVPN’s servers via the button below, including the VPN protocol available on each server.

On the plus-side, StrongVPN does make a very high number of IP addresses available to its customers – almost 60,000 – which is great to maintain good speeds.

StrongVPN recently started working again with US Netflix on several of its US servers, after weeks of being completely blocked.

There are no dedicated streaming servers, which makes the task more difficult, but you shouldn’t find it too hard to find a server that works.

Streaming BBC iPlayer is a different story. StrongVPN unblocks iPlayer inconsistently, working on some days but not others.

Torrenting and P2P activity is allowed on all StrongVPN servers.

Download and upload speeds were good, and a strict no-logs policy means all your online activity remains private.

What’s more, StrongVPN also has a VPN kill switch and we didn’t detect any IP, DNS, or WebRTC leaks in our latest round of testing (more on this below).

A good option for users in China

StrongVPN is still a fairly good option to bypass aggressive web blocks in highly censored countries like China, Iran, Turkey and the UAE.

The additional obfuscation tools you get with StrongVPN are very useful to evade online censorship. It further scrambles your VPN connection, making it very hard to detect.

Keep in mind that the StrongVPN website is blocked in China, and possibly in other high censorship countries too, so we recommend you download and set up StrongVPN before you travel there.

Works with all popular devices plus routers

On its website, you’ll also find manual setup guides for other types of devices, platforms and software like Linux, Amazon Kindle and Kodi.

StrongVPN also provides step-by-step instructions on how to manually set up the VPN on your router to protect all internet traffic in your home.

StrongVPN’s 12 simultaneous connection limit is very generous and one of the highest we’ve seen.

StrongVPN can be used with consoles and streaming devices by either following the manual configuration instructions or installing StrongVPN on your home router.

There is also a native app for the Amazon Fire TV Stick, but it’s just not as good as some of the better Firestick VPN apps available.

StrongVPN no longer provides VPN browser extensions, which is a shame.

If you want to use a VPN extension from your browser, your should consider using one of these VPN add-ons for Chrome or Firefox.

StrongVPN is a safe VPN service, but it isn’t the most secure VPN provider we’ve reviewed.

On one hand, it has a VPN kill switch which prevents your true IP address from being exposed, it uses AES-256 encryption, and it operates its own DNS servers, meaning none of your web traffic will be routed through third-party servers.

We were also pleased to detect no DNS or IP leaks in our latest tests. 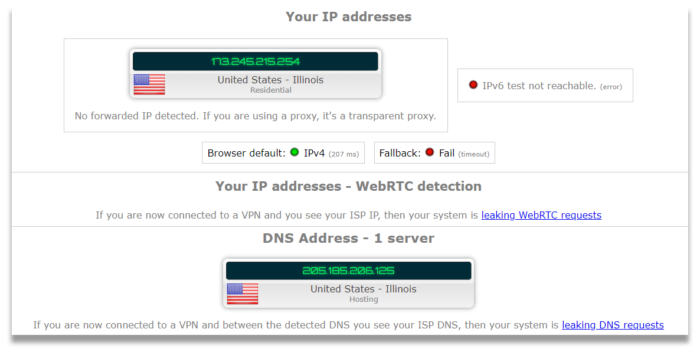 So, why is it not the most secure VPN?

Mainly because the very secure and fast OpenVPN protocol isn’t available on all servers – in fact, the vast majority of StrongVPN’s servers use the vastly outdated and insecure PPTP protocol.

StrongVPN has recently introduced support for the latest VPN protocol WireGuard. It is available as a beta version currently, and users are warned that while faster than other protocols available WireGuard is still in development.

Simply, easy-to-use apps for all devices

How to Install & Set Up StrongVPN

StrongVPN has recently updated its set of custom apps to make them far more accessible to inexperienced VPN users. The main screen is very stripped back, displaying only essential connection details.

A limited range of settings can be found behind the cog icon along the top of the app, however these are very basic. 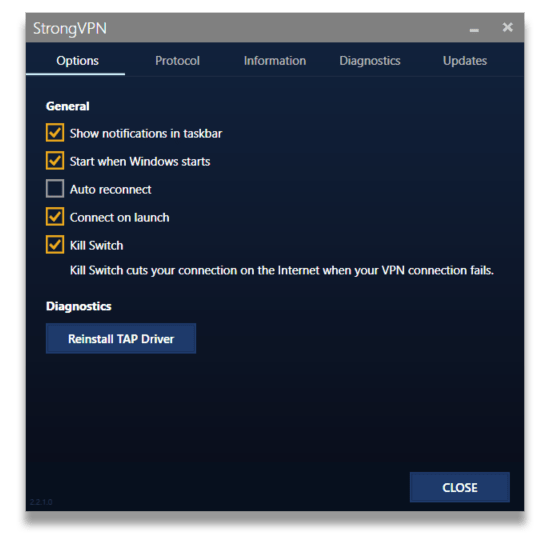 The mobile apps are also very good; simple and effective with a big button in the middle of the screen, but lack some security features, such as a kill switch.

Unfortunately, StrongVPN no longer offers any browser extensions. If you want something like this we’d recommend our top pick ExpressVPN.

Live chat is available 24/7, but most of the time we just ended up talking to a sales agent who copied and pasted answers from the FAQs section.

This was a little disappointing, but whenever they couldn’t solve our problems they did forward our details on to the tech team, who were always quick to respond.

The official StrongVPN website provides a great range of setup manuals for many different devices, including video tutorials and screenshots.

For basic instructions, the FAQ section should do the job, but for anything beyond simple help you’ll have to contact their customer support team.

StrongVPN offers a couple of different pricing plans to help you decide on the most suitable option. These have the same features but the longer subscription you opt for, the less you pay on a monthly basis.

The priciest option is the single month plan at $10.00, however this is reduced by 42% to a reasonable $5.83 if you sign up to an annual package.

StrongVPN offers a 30-day money-back guarantee in place of a free trial. This is for customers who are “less than 100% satisfied with the StrongVPN service,” and there are no hidden restrictions or data caps.

StrongVPN accepts the majority of standard payment options including most major credit and debit cards, PayPal and Alipay. It’s disappointing to see no option to pay in cryptocurrencies, however.

Do We Recommend StrongVPN?

StrongVPN is an easy VPN to recommend: it’s fast, works with all manner of streaming platforms, is great for torrenting, and much more.

We love StrongVPN’s its no-logs policy, and 12 simultaneous connections is one of the most generous allowances we’ve seen. Some of its privacy features could do with improving, and the server network isn’t as big as we’d like, but StrongVPN is still a very impressive VPN.

Worried about StrongVPN's lack of locations? Try NordVPN: it has thousands of servers spread across dozens of countries all over the world. Read NordVPN review

Astrill is one of the most secure, safe, and advanced VPNs available today. It's so well-maintained that it even works to bypass censorship in China. Read Astrill review

Already use StrongVPN? Tell us what you think.

Strong VPN has worked perfectly for me since 2010. I live in the UAE, where some simple sites are blocked, such as Skype and Western TV. I've never had an issue accessing what I wanted with Strong VPN. Each time I have come across an issue with loading Strong VPN onto a new phone or computer, the support staff have emailed me back within minutes, with a solution. The step-by-step solution was easy to follow and I was able to do it myself. If I was unable to follow the steps, the support person would remote access my device and do it for me. I will continue to be a customer of this fantastic service.

The installation process is a bit of a pain, but using it is dead easy and it still works with Netflix in a ton of countries. I use it to access foreign language dubs of shows to practice the languages I'm learning, since a bunch of other proxies stopped working after the Netflix crackdown.