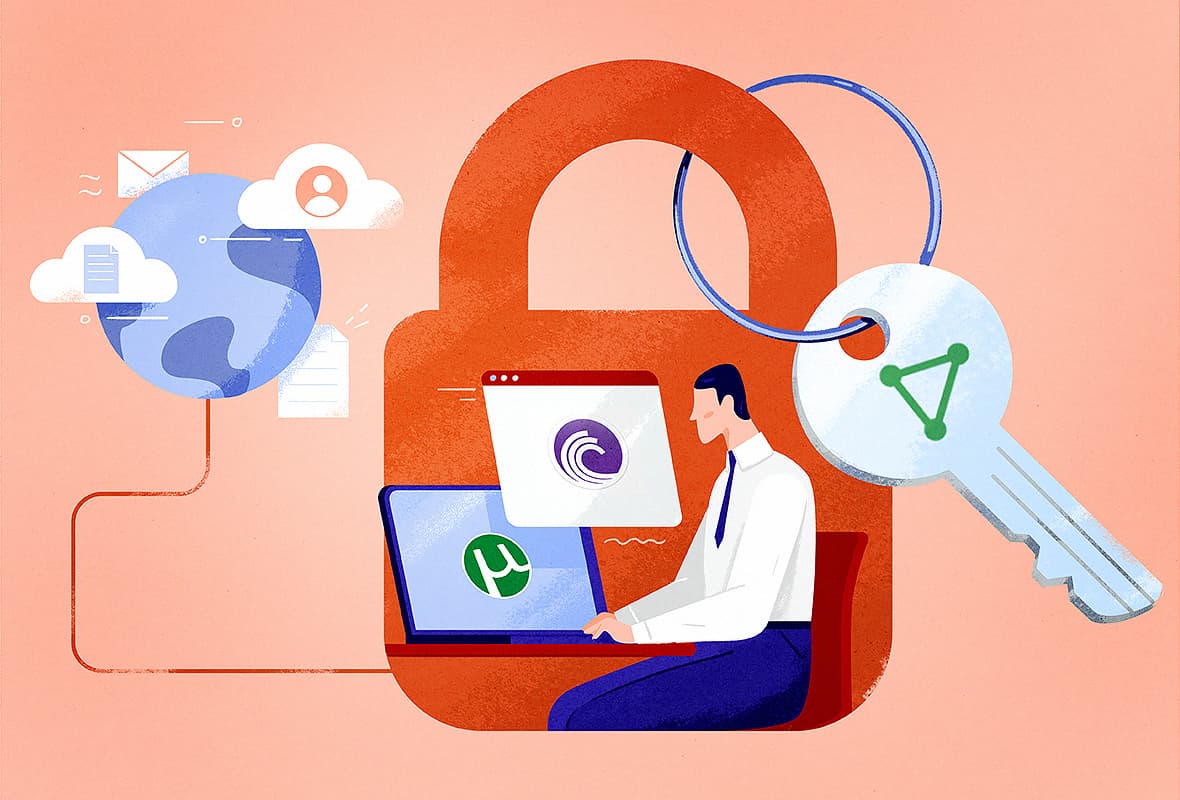 Our extensive P2P tests confirm the premium version of Proton VPN is a good VPN for torrenting. It’s a reliable service with a privacy-friendly logging policy and a strong commitment to transparency.

The VPN service secures your P2P traffic with AES-256 encryption, and assigns you an anonymous IP address that can’t be traced back to you.

We also tested and reviewed Proton VPN Free, but found it doesn’t support P2P traffic. If you want to torrent with Proton VPN, you’ll have to pay.

In this guide, we’ll explain how to torrent safely and avoid monitoring using the premium version of Proton VPN.

We’ll also cover in detail the pros and cons of torrenting with Proton VPN, as well summarizing the service’s key P2P-specific features.

Is Proton VPN Good for Torrenting?

SUMMARY: Proton VPN is a good, but not the best, VPN for torrenting. Ultimately, it is a safe and reliable service that protects your file-sharing activity with acceptable torrent speeds and no IP address leaks.

Here’s a summary of Proton VPN’s strengths and weaknesses.

However, top torrent VPNs like ExpressVPN and Private Internet Access are much faster and have larger server networks. Proton VPN will nevertheless keep you safe when torrenting.

Here is a table comparing the torrenting performance of each Proton VPN subscription plan:

Here are the features that make the premium version of Proton VPN a good choice for P2P file-sharing:

Proton VPN offers high-performance servers specially configured for torrenting and other P2P activities. You can find them by looking for the two-arrow icon in the app’s server list.

These optimized servers are only available in these twelve locations:

If you’re not based somewhere close to these countries, you’ll likely experience some connection slowdowns when connecting to these servers.

Trying to torrent on a non-P2P optimized server may lead to an error message or a P2P VPN redirect. This is because a number of the data centers Proton VPN rents its servers from do not allow P2P traffic.

As a solution, the provider uses a ‘Stateful Firewall’ that identifies P2P traffic and re-routes it to another VPN server that does permit torrenting.

Importantly, Proton VPN assures us that this firewall works without logging any identifiable information or seeing any of the files you’re downloading.

While it is impressive that Proton VPN offers P2P-optimized servers, it is a shame that they are available in a limited number of locations and that you may be blocked from torrenting on Proton VPN’s other servers.

If you’re looking for a safe place to host a VPN service, Proton VPN’s home country of Switzerland is a fantastic location for three main reasons:

You can torrent with Proton VPN comforted by the fact that Switzerland is a safe VPN jurisdiction that is unlikely to force a VPN company to record and store customer data.

Some VPN services keep logs of user behavior. This completely defeats the point of using a VPN for torrenting because it means your activity is still being recorded.

For this reason, even otherwise secure VPN services like Avast Secureline are not recommended for P2P.

Thankfully, Proton VPN operates a minimal logging policy. The only thing it stores is a timestamp of when you last logged in, which it uses to protect your account against unauthorized use.

There’s no record of where you signed in from, how long you were logged in, or what you accessed. What’s more, your previous timestamp is overwritten every time you log in for a new session.

This is about as minimal as logging can be.

If a court ever ordered Proton VPN to disclose user information, it simply wouldn’t be able to. There isn’t any recorded data to reveal.

This happened in January 2019, when a Swiss court approved a request from a foreign country asking for user data. “As we do not have any customer IP information, we could not provide the requested information and this was explained to the requesting party,” wrote Proton VPN.

You can also obtain a Proton VPN account anonymously, without providing any personal identifying information, by paying with Bitcoin (instead of credit/debit card or PayPal).

Testing ProtonVPN’s speeds, we experienced reasonably fast performance when connecting to a local server. We saw just a 7% drop in download speed on a UK-to-UK connection.

Sadly, Proton VPN does not perform anywhere near as well on international connections. It’s easily outperformed when torrenting with Surfshark, or other torrent-friendly VPNs like NordVPN and IPVanish.

This is particularly disappointing given Proton VPN’s limited range of P2P-friendly server locations. If they’re not near your physical location, your connection speed might suffer.

We also ran a standardized torrenting speed test by downloading a copyright-free video file over our 100Mbps broadband connection.

We timed how long it took to download, and divided the file size by the time taken, so that we could calculate the download bitrate.

The Verdict: Proton VPN has an average bitrate of 3.7MiB/s (or 31Mbps). Several of our top picks, such as ExpressVPN and NordVPN, achieved over 9MiB/s (or 75.5Mbps). Proton VPN is fast enough for us to recommend it, but if you’re impatient, faster options are available.

It’s important to note that we tested the Proton VPN Plus plan to get these speeds. Download speeds are slower on Proton VPN Basic and Proton VPN Free.

This is because these plans offer fewer servers, and the more congested a VPN server is, the slower the connections.

Proton VPN has a modern, comprehensive set of security features to protect your data and your privacy, which make it ideal for torrenting. These include:

Can You Torrent With Proton VPN’s Free Plan?

Proton VPN supports torrenting in its three paid subscription levels: Basic, Plus, and Visionary. The free version of Proton VPN does not support torrenting.

The free version of Proton VPN Free doesn’t support P2P traffic, though. According to the provider, this is to limit server congestion and prevent a decline in performance for those who really need the service. 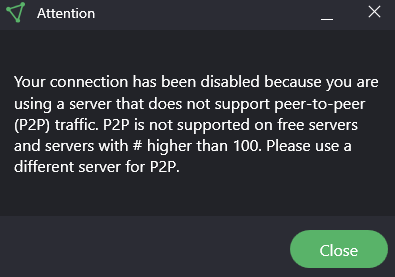 Torrent traffic is blocked on all Proton VPN Free servers.

If you want a risk-free way to trial Proton VPN risk-free, there’s a 30-day money-back guarantee on all paid plans.

How to Torrent with Proton VPN

Here’s a video showing you how to torrent using Proton VPN. In this instance, we used Proton VPN to safely download a torrent file on qBittorrent. 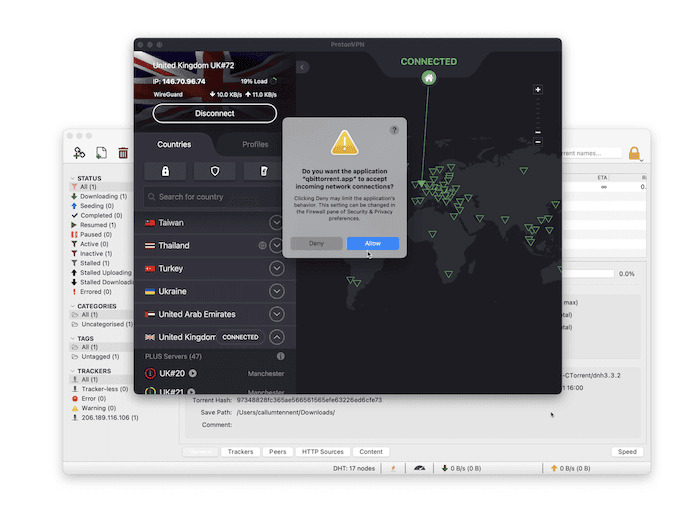 Video tutorial showing how to torrent files with Proton VPN.

Below are step-by-step instructions on how to use Proton VPN for torrenting and P2P file-sharing: