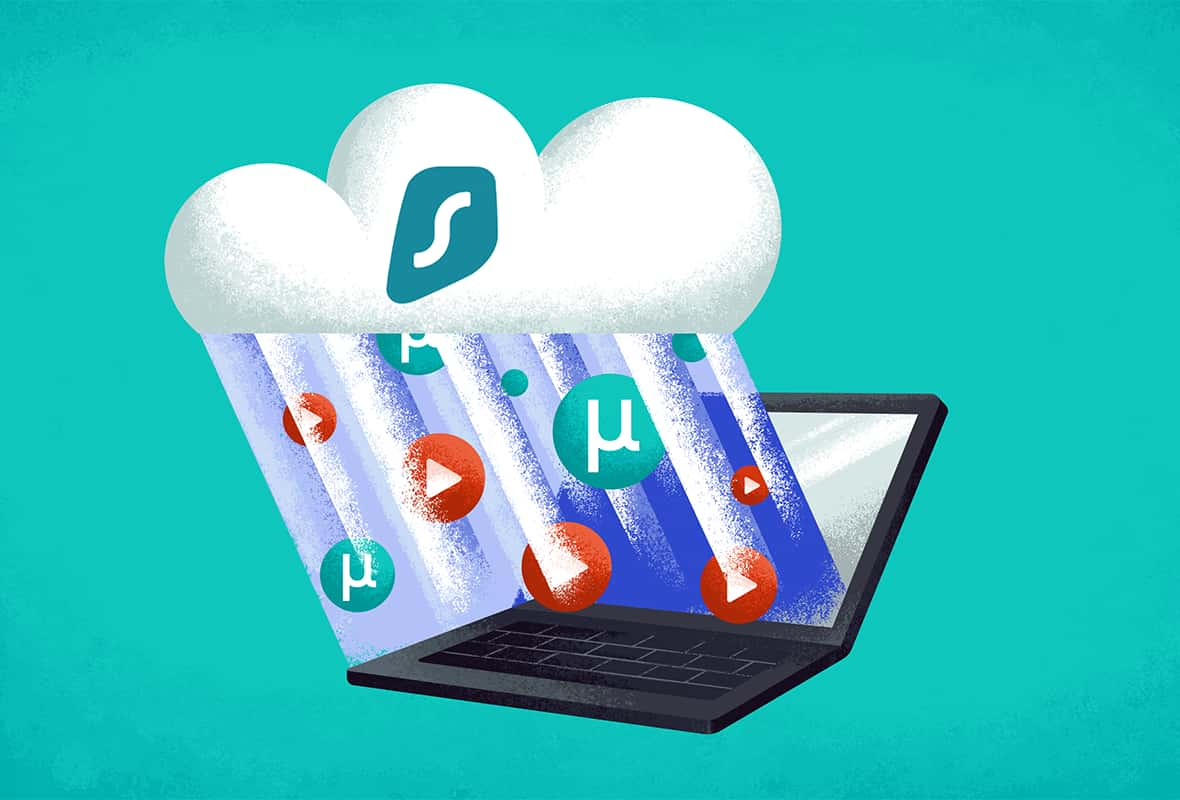 DISCLAIMER: While sharing files is perfectly legal, torrenting copyrighted material is not. If you want to avoid legal troubles, avoid illegal torrent sites and do not download an illegal torrent.

A secure VPN is essential to protect your identity when you are torrenting files.

The best VPNs mask your IP address and encrypt your traffic so that your ISP, and other users in the peer-to-peer (P2P) network, cannot record your activity or trace your downloads to target you with malware or copyright claims.

Sadly, not every VPN service supports P2P traffic, and many services simply do not offer the level of security necessary for safe and anonymous torrenting.

Surfshark claims to be “a torrent-friendly VPN that has everything you need”. We put this claim to the test by analyzing its average torrenting bitrate, logging policy, encryption standards, and server network, and comparing the VPN to 56 other VPN services.

We found that Surfshark is a safe and secure choice for torrenting. It supports torrenting across all its servers and works effectively with a wide range of torrent clients including uTorrent, BitTorrent, and qBittorrent.

Surfshark effectively masks your real IP address and can safely be used with the top torrent sites.

However, Surfshark is not the best VPN for P2P activity. Its speeds could be faster, and it doesn’t support port forwarding.

A Torrenting Alternative to Surfshark: Surfshark is a good VPN for torrenting, but it’s not the very best. It’s worth trialing ExpressVPN, one of our top-rated torrent VPNs, for 30 days risk-free.

In this guide, we cover all aspects of torrenting with Surfshark, including the VPN’s strengths and weaknesses.

We also suggest VPN alternatives to consider and explain how to torrent safely using Surfshark.

Here’s a brief video showing you how we downloaded torrents using Surfshark: 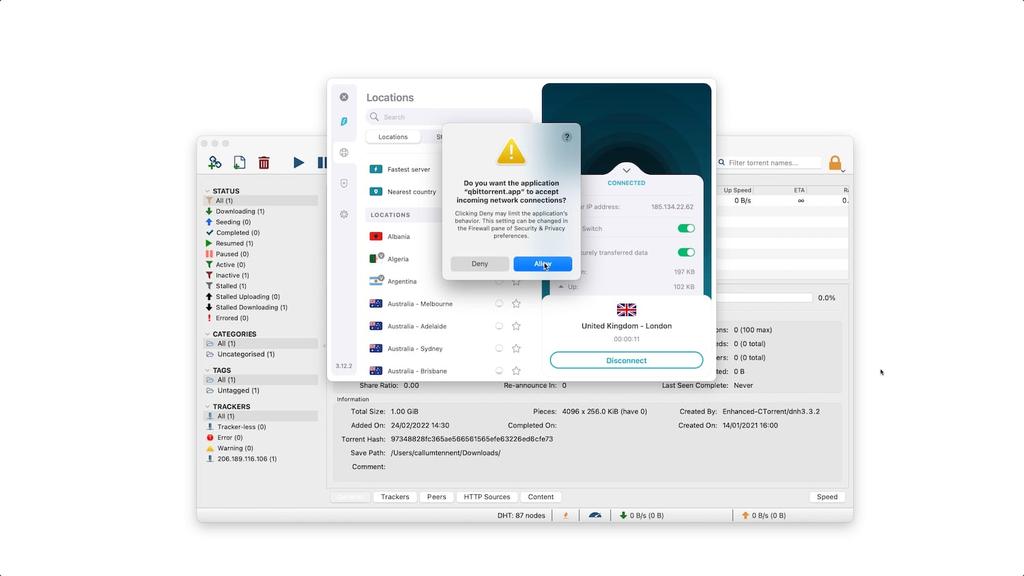 Surfshark’s Torrenting Performance At a Glance

How to Safely Torrent with Surfshark

When you use Surfshark with a torrenting client, the most important safety rule is to make sure the VPN is active before you open the torrenting application.

Additionally, ensure the VPN continues to run even after you’ve finished downloading.

For more advice on secure torrenting practices, read our guide on how to torrent safely.

Is Surfshark Good for Torrenting?

Surfshark is a safe choice for torrenting, but it’s not the best P2P VPN on the market.

The VPN comes with strong AES-256-bit encryption, a kill switch, and advanced features including Double VPN and obfuscation. It also supports torrenting on all its servers.

Though it’s not the best for torrenting, it’s still a good choice for casual P2P users looking for an effective all-round VPN.

Moreover, it’s one of the cheapest VPNs on the market and it also works well with international streaming services like Netflix, Disney+, and BBC iPlayer.

Learn more about the VPN’s overall performance in our detailed review of Surfshark.

Below is a table outlining the strengths and weaknesses of Surfshark for torrenting specifically:

Here’s an in-depth look at torrenting with Surfshark:

Is Surfshark Fast Enough for Torrenting?

Our regular torrenting speed tests have found that Surfshark is fast enough for a good torrenting experience, but it doesn’t match up with the fastest torrenting VPNs on the market.

Connecting to a VPN server in the same country, we saw a speed loss of just 15% with the VPN running.

While that’s not the fastest performance we’ve seen, it is still relatively fast. Connecting to a VPN server in your country protects your IP address from being traced without the speed loss of an international VPN connection.

Surfshark’s long-distance speeds are also good. Connecting from the UK to the US, we measured an average speed loss of 41%. Connecting to Australia, the speed loss was 40%.

We tested Surfshark’s average torrenting bitrate and compared it to 11 other P2P VPNs. Surfshark measured an average bitrate of 8.7MiB/s, compared to 10MiB/s with Astrill and 9.4MiB/s with ExpressVPN. In total, six torrenting VPNs were faster than Surfshark for torrenting.

EXPERT TIP: The OpenVPN protocol is typically faster than WireGuard when using Surfshark. Though Wireguard is usually faster than OpenVPN, we recommend you use OpenVPN with Surfshark for the fastest torrenting speeds.

Surfshark advertises more than 3,200 servers in 65 countries, all of which are P2P-friendly.

However, servers that are specifically-optimized for P2P activity are only available in specific locations. These servers aren’t labelled by default – to find them, type “p2p” into the server list. 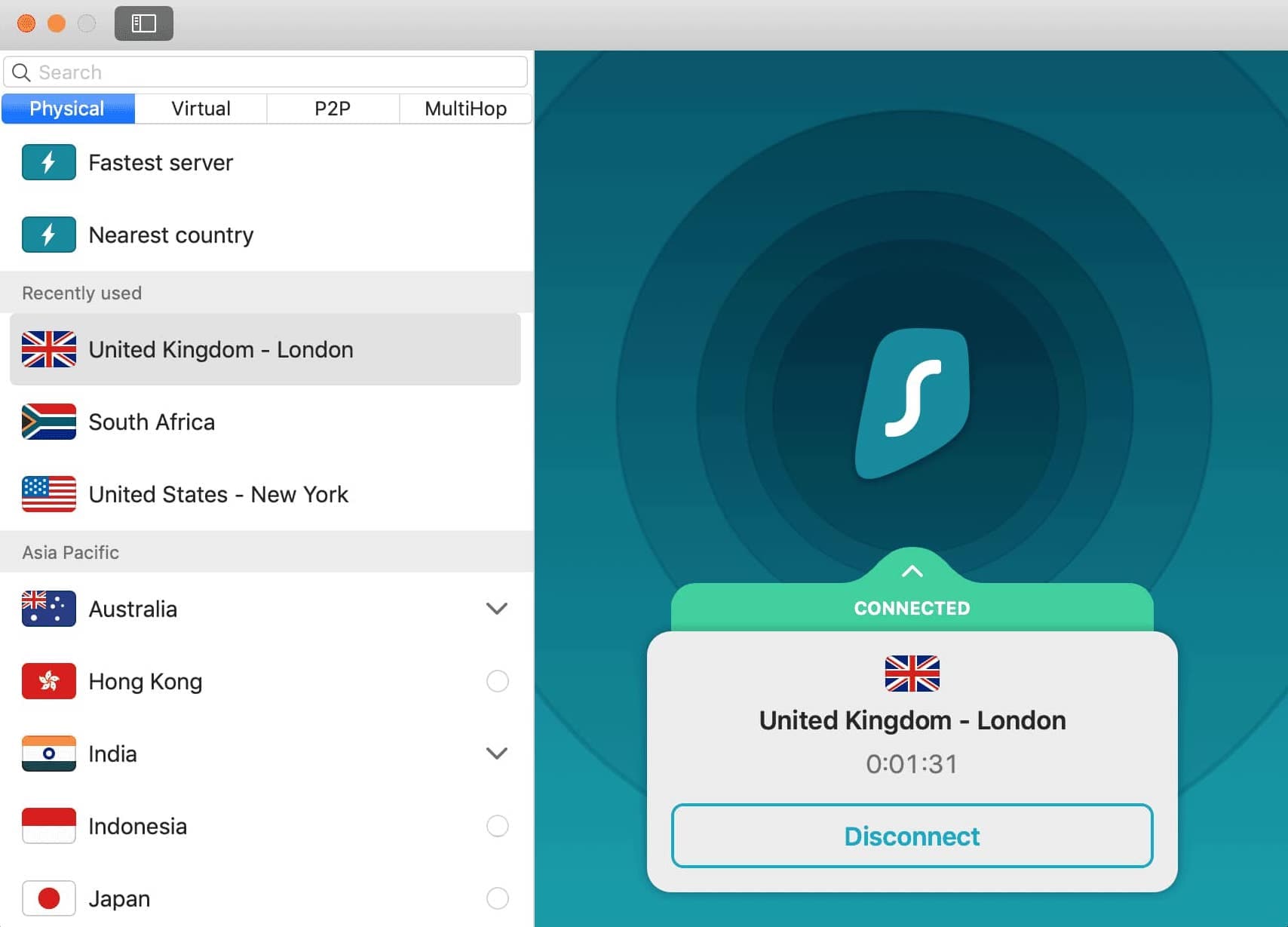 You can find P2P-optimized servers in Surfshark’s server menu.

If you use a normal Surfshark server for torrenting, your downloads are likely to be significantly slower.

It’s better to connect directly to a P2P-optimized server. Surfshark does not disclose how many of these there are, but they are available in the following locations:

Surfshark has a safe logging policy that collects absolutely no data about your activities while using the VPN. However, it does record aggregated performance data, unsuccessful connection attempts, and how often you use the VPN.

This isn’t a zero-logs policy, but it’s still safe. Surfshark does not store anything sensitive about you, your IP address, or your browsing history.

Surfshark is based in the British Virgin Islands (BVI), a privacy haven that is ideal for hosting a VPN service. There are no data retention requirements in the BVI, and no foreign governments can force Surfshark to store or share user data.

How Strong Is Surfshark’s Encryption?

Surfshark hides your IP address and protects your web traffic with industry-standard encryption. Here’s a quick summary of its security offering:

We tested Surfshark using our VPN leak test and found no DNS, IPv4, or WebRTC leaks when using the VPN apps.

However, Surfshark does not support IPv6, which means it won’t work with an IPv6 router and it may leak your public IP address if you’re on an IPv6-enabled network. We recommend you disable IPv6 or choose a VPN with IPv6 protection, like ExpressVPN.

EXPERT TIP: Surfshark offers browser extensions, but they only encrypt your activity within the web browser. That means you’ll need the full desktop VPN application to protect your torrenting activity.

No Support for Port Forwarding

As a result, many users consider port forwarding to be an essential feature for any torrenting VPN.

Surfshark doesn’t support port forwarding due to apparent security risks, which means it isn’t as easy or effective for seeding torrenting files as other top VPNs. In fact, there are some anecdotal reports suggesting that Surfshark doesn’t allow seeding at all.

If you’re looking for a VPN that supports port forwarding, we recommend PrivateVPN, AirVPN, and Astrill VPN. PIA is another safe option for torrenting, though its speeds are slower than most competitors. Port forwarding does enable external connections to bypass the firewall, so remember to use it with caution.

Despite its other shortcomings, Surfshark is a fully-featured VPN with an extensive suite of additional security features that are useful for torrenting.

These security features can be found on all of Surfshark’s apps for Windows, Android, Mac, iOS devices, and routers.

The Amazon Fire TV Stick and router apps can also be used to stream Kodi extensions that use P2P sharing.

There is also no limit on the number of simultaneous connections you can have on one subscription, which means you can use Surfshark on all of your devices at the same time.

How Does Surfshark Compare to Other P2P VPNs?

Surfshark is a good choice for casual torrenting. It protects your identity and encrypts your connection at reasonably fast speeds.

Nevertheless, there are better VPNs for torrenting. Services like ExpressVPN and AirVPN are faster on average, and have additional P2P-specific features.

Here’s a table comparing Surfshark to its top torrenting competitors:

ExpressVPN is one of the best P2P VPNs we’ve tested. It registered a fast average bitrate in our torrenting tests, faster than both Surfshark and AirVPN on average.

While torrenting with ExpressVPN we measured a download speed loss of just 8% compared to our speeds without a VPN. 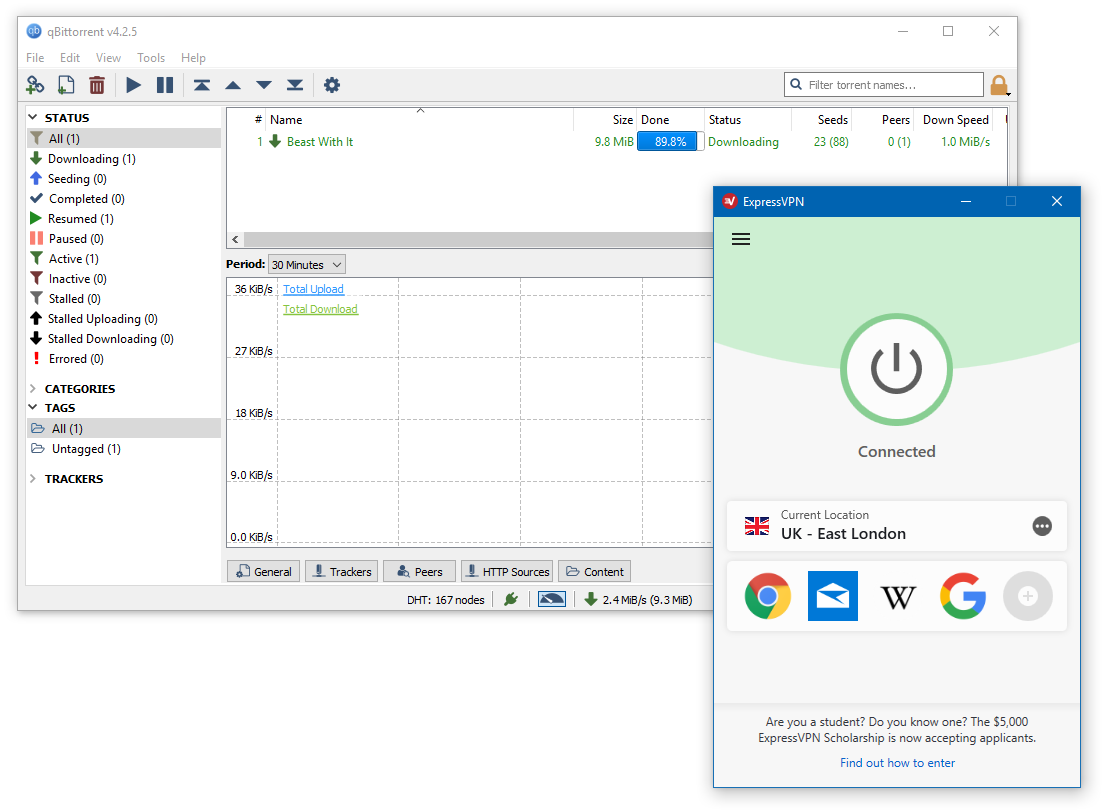 ExpressVPN being used alongside qBittorent.

The VPN offers the highest number of P2P-optimized servers – more than 3,000 compared to IPVanish’s 2,000. Surfshark does not disclose the total number of servers in its network.

Furthermore, ExpressVPN has an audited zero-logs policy and is based in a privacy-friendly jurisdiction (the British Virgin Islands).

However, ExpressVPN is more expensive than Surfshark and the other top-rated torrent VPNs. Its cheapest price is $6.67 per month on a 15-month subscription.

AirVPN is the best alternative to Surfshark if you need port forwarding for torrenting. However, it’s significantly more complicated to use.

While Surfshark has user-friendly applications and settings, AirVPN requires some manual configuration.

In a nutshell, Surfshark is a better for beginners, but AirVPN is built for experienced torrenting users. 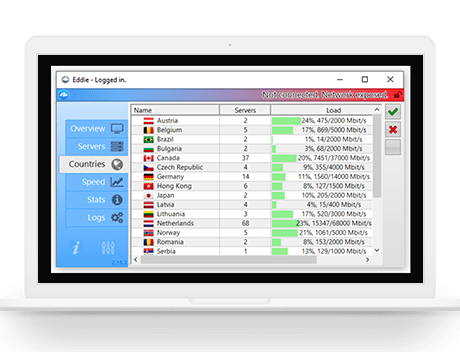 AirVPN’s menus are complicated for beginners.

AirVPN has been operating much longer than Surfshark, and most other commercial VPN services. It has a proven track record of trustworthiness. In fact, in all that time there have been no security breaches, logging or data-sharing incidents.

The service’s privacy policy is vague, but we have been reassured the VPN does not collect any information that could be used to identify you.

IPVanish is another very good P2P VPN. Its torrent speeds are faster than Surfshark’s across 2,000 servers and 40,000 anonymous IP addresses.

While Surfshark maintains minimal connection logs, IPVanish does not log any of your internet activity. The only information it records is your email address and payment method. 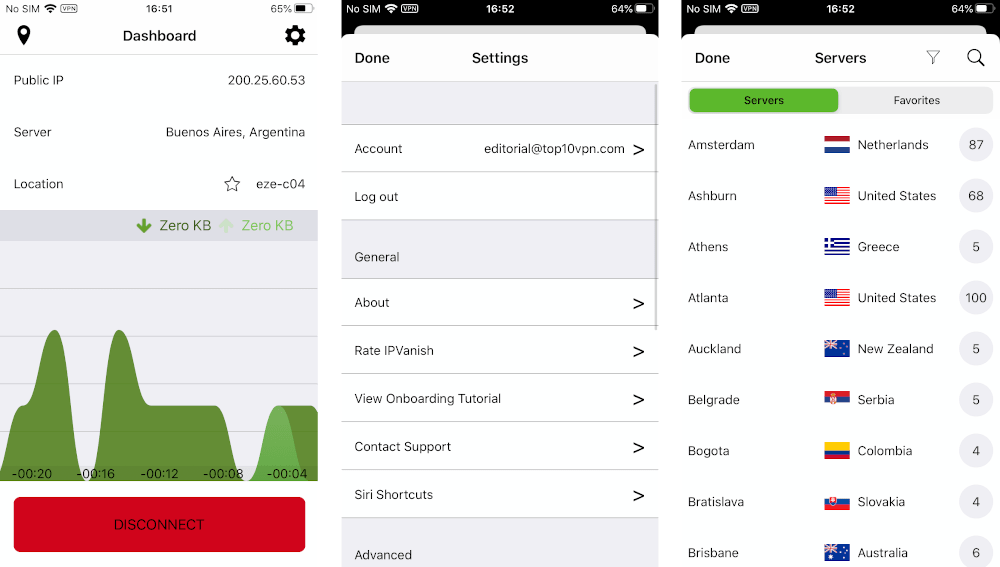 Using the IPVanish application on Android.

IPVanish costs $3.33 per month for a one-year subscription. This is more expensive than Surfshark’s cheapest option, but it’s still great value over a shorter pricing plan.

Although IPVanish is a better VPN for torrenting, Surfshark is better suited to users who want to use a VPN for many purposes.

For instance, streaming fans should pick Surfshark over IPVanish, which only works with American Netflix. By contrast, Surfshark unblocks many Netflix libraries, plus BBC iPlayer, Disney+, and more.