Surfshark is a great VPN for Apple TV. It’s easy to install and delivers fast-enough speeds for 4K picture quality. It also unblocks popular streaming apps, including Netflix and Hulu. The best way to use Surfshark with Apple TV is via AirPlay or Smart DNS. 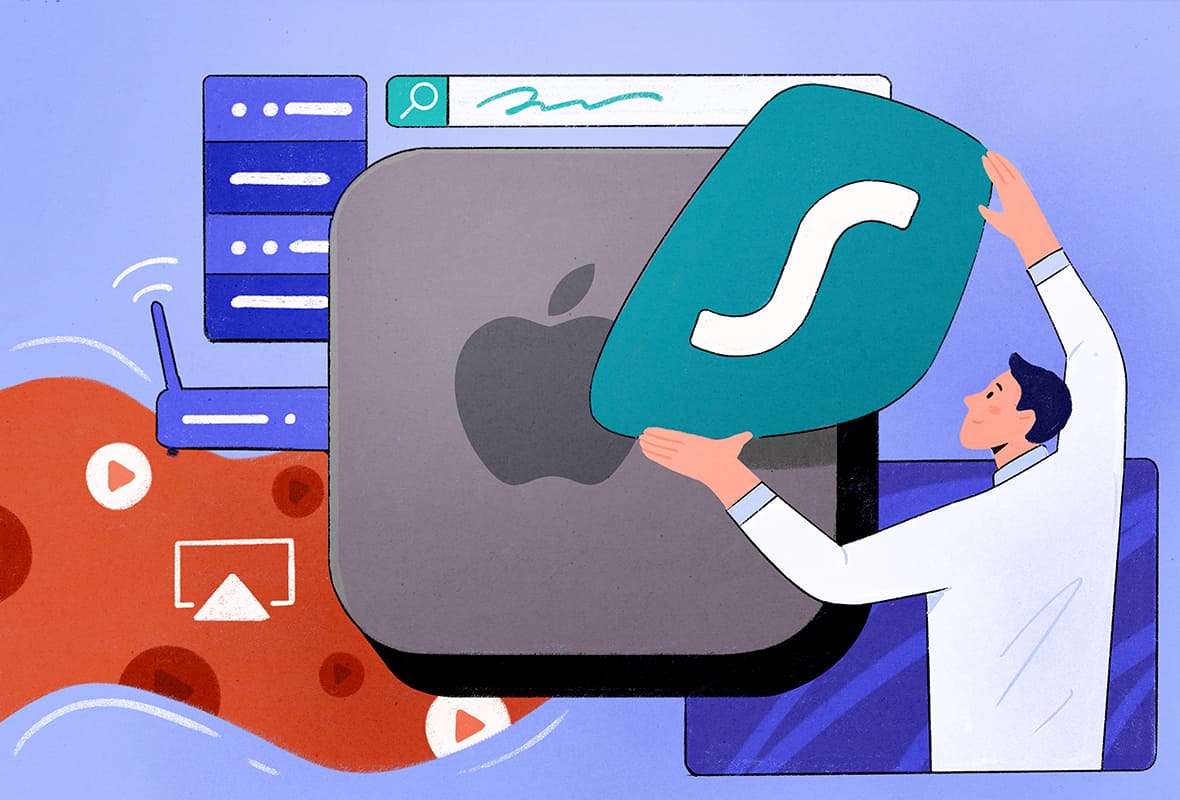 Surfshark is an excellent Apple TV VPN that can hide your Apple TV’s IP address and spoof your location. This lets you access geo-restricted streaming apps, like Netflix, BBC iPlayer and HBO Max.

The problem is that the tvOS App Store doesn’t support VPN apps, so you can’t install Surfshark directly onto your Apple TV.

Instead, you’ll have to set up Surfshark on a separate device, or use a proxy workaround.

In this guide, we’ll explain how to AirPlay to Apple TV from your iPhone, and how to use Surfshark’s Smart DNS tool.

We’ll also detail how to create a virtual router from your Mac, and how to install Surfshark on your physical router.

We provide detailed instructions and a flowchart to help you figure out which option is best for you.

Read our troubleshooting tips if Surfshark stops working with Apple TV, as well as what makes Surfshark a great Apple TV VPN, based on our tests.

EXPERT ADVICE: If you aren’t already a subscriber, you can test Surfshark for free for up to 67 days. Try Surfshark risk-free!

How to Set Up Surfshark on Apple TV

Unlike on other devices, you can’t download and install the Surfshark application on your Apple TV.

The four ways to set up Surfshark on Apple TV are:

To help you decide which installation method is right for you, use our flowchart/table below: 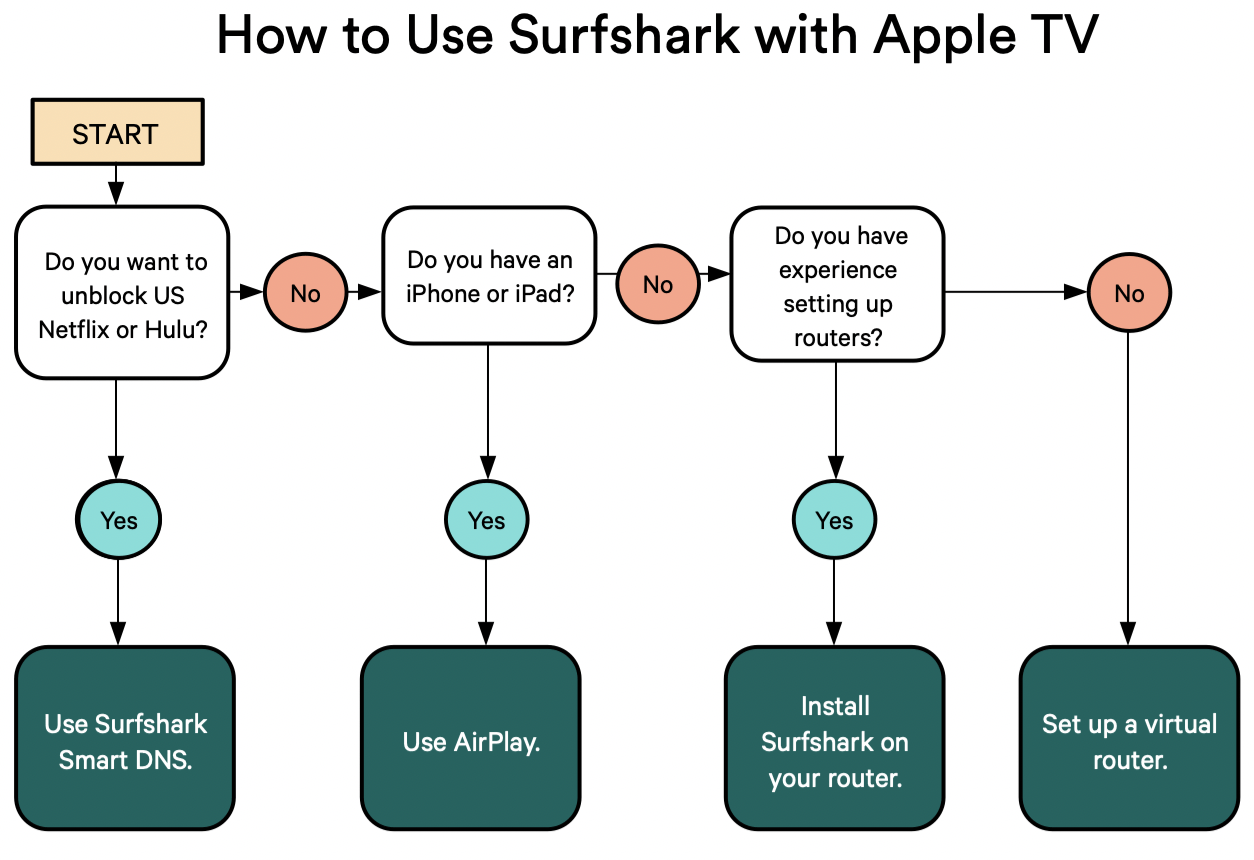 How to set up Surfshark with Apple TV.

Here’s a quick overview of the pros and cons of each installation method, too:

In the following section, we’ll give easy-to-follow instructions on each setup method.

How to Use AirPlay with Surfshark on Apple TV

Using AirPlay, you can connect to a Surfshark server on your iPhone or iPad, then cast content to your Apple TV.

Your Apple TV doesn’t have to be connected to a VPN for this to work. This is by far the easiest way to get Surfshark running on your Apple TV.

Here are the full instructions on how to use AirPlay with Surfshark on Apple TV:

How to Use Surfshark Smart DNS with Apple TV

Smart DNS works by redirecting traffic from certain streaming sites to proxy servers in regions around the world. It’s ‘smart’ because it ignores all other traffic, like cloud syncing and app updates.

We found that Surfshark’s Smart DNS feature only works with US Netflix and Hulu. Although Surfshark claims it also unblocks Disney+ and HBO Max, we’ve never seen this in our testing.

Generally speaking, Smart DNS has many drawbacks compared to a VPN. Streaming quality is sometimes poor, and it doesn’t anonymize your activity. You’ll also have to give your IP address to Surfshark so they can verify you’re a paying subscriber.

However, Smart DNS is still useful because it can be quickly and easily set up on devices that don’t allow VPN apps, like Apple TV.

In the video below, watch how we set up and used Surfshark’s Smart DNS to unblock US Netflix. 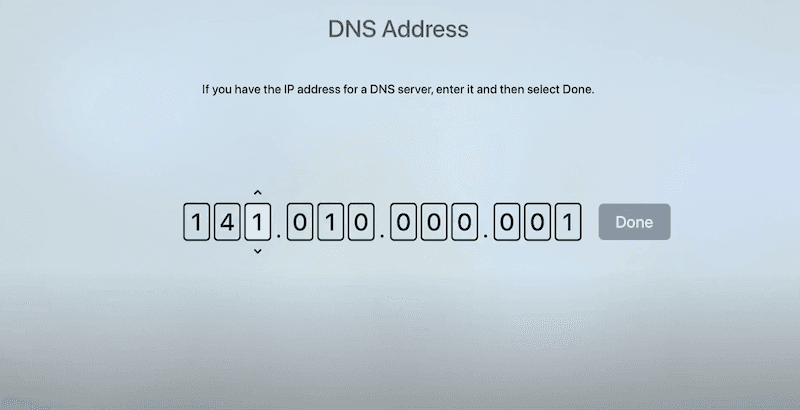 3. Install Surfshark on Your Router

How to Connect Surfshark to Apple TV Using a Router

If you want full encryption on your Apple TV, you’ll need to connect it to a router. You can also create a virtual router, which we detail in the section below.

Installing a VPN on your router will encrypt all the traffic on your network, not only from your Apple TV. It’s the best method if you want full security, but the worst if you want convenience.

Disappointingly, unlike many VPNs, Surfshark doesn’t allow you to buy routers pre-installed with its software. You’ll have to do it yourself.

You won’t be able to do this on the vast majority of routers, though, especially one supplied by your ISP. You’ll need a router that supports VPN clients or DD-WRT.

If your router does support VPNs, we recommend reading the specific installation instructions from Surfshark’s website. The method is difficult and varies significantly depending on the router’s make and model.

Here are the basic steps for setting up Surfshark on your router:

4. Use a Virtual Router

How to Connect Surfshark to Apple TV Using a Virtual Router

You can also connect your Apple TV to Surfshark by creating a virtual router from your Mac. This method is simpler and cheaper than using an internet router.

You keep all the benefits of a VPN router, too, including full VPN encryption and the choice of Surfshark’s entire server list.

Here’s how to share your Surfshark VPN connection from your Mac to Apple TV:

Surfshark Not Working with Apple TV?

Surfshark works reliably on Apple TV, but you might still encounter problems from time to time.

Below, we explain how to fix the most common problems we saw while testing Surfshark on Apple TV.

Connecting to a Surfshark server in another country won’t change your App Store location. To change country with Surfshark on Apple TV, you need your Apple ID to be tied to the region.

For example, to download the Hulu or HBO Max app from the tvOS App Store, you’ll need a US-based Apple ID. Likewise, you will need a UK account to access BBC iPlayer and All 4.

To do this, create a new Apple ID from your iOS device or Mac in the usual way. When prompted to enter your region, choose the country whose content you wish to access.

Once you’ve created the account and downloaded the apps, they will remain accessible from your home screen. You’ll still be able to open and use them while logged into your original Apple ID.

To use its Smart DNS feature, Surfshark requires you to provide your current IP address. Check yours by using our IP checker tool.

If your IP address in your Surfshark account is different, you won’t be able to access any geo-blocked streaming services.

To update your IP address, navigate to the Smart DNS section of Surfshark’s website and click Change IP. Surfshark will automatically update the IP address associated with your account.

If you’re using AirPlay, you’ll only be able to beam content to your Apple TV when your iPhone and iPad are on the same network as it.

To fix this, simply connect your iOS device to the same WiFi network. If you’re still having issues, turn off mobile data and WiFi Assist from your iPhone or iPad’s settings.

As well, remember that AirPlay doesn’t work with Netflix. Instead, you’ll have to use Surfshark’s Smart DNS or install it on a router.

Is Surfshark a Good Choice for Apple TV?

Surfshark is a great Apple TV VPN. It works reliably with most streaming services, has fast download speeds, and uses top-tier encryption.

We’ve tested 56 VPNs on our Apple TV, and Surfshark came out as the third-best option. It’s not perfect, though. Some of the other VPNs we tested had better platform support and faster speeds.

The benefits of using Surfshark with Apple TV:

The drawbacks of using Surfshark with Apple TV:

Overall, we recommend Surfshark for Apple TV users who want a top VPN for a budget price.

How Does Surfshark Compare to Other VPNs?

Although Surfshark is one of the best VPNs you can get for Apple TV, there are better all-round VPNs.

By choosing another VPN, you can unblock more streaming services, configure it using a router app, or save money.

Here’s Surfshark compared to some of its top competitors:

Overall, Surfshark is a good choice for Apple TV and certainly one of the best in its price range. However, ExpressVPN beats it in each of our key testing categories, and Windscribe is totally free to use.

ExpressVPN is very easy to use on Apple TV, making it our top-ranked Apple TV VPN. It’s fast, it always works with US Netflix, and it’s compatible with more devices than any other VPN.

Unlike Surfshark, ExpressVPN includes an app for routers. Using it, you can easily switch server location and quickly configure security settings. With Surfshark, this process is much more difficult and time-consuming.

However, ExpressVPN costs almost three times as much as Surfshark. It’s worth the extra price if you can afford it, but Surfshark is still a fine choice if you’re on a budget.

Windscribe is a good alternative to Surfshark if you don’t want to spend a cent. It’s completely free, with no payment details required. As you’d expect, though, Surfshark is better than Windscribe Free in every area.

Most of all, Windscribe doesn’t include a Smart DNS feature with its subscription. To get access to it, you have to pay an additional $40 a year. Surfshark’s Smart DNS tool is included with every VPN subscription.

Windscribe Free also doesn’t work with US Netflix, nor does it unblock as many Netflix libraries as Surfshark. Surfshark can stream 10 Netflix regions, including the US.