TorGuard is a good VPN for privacy-minded users. It's a no-logs VPN, which uses the recommended 256-bit AES encryption cipher and allows torrenting on all its servers. It's very fast on local speeds, but unfortunately it slows down over longer distance connections. And unlike its other top rivals, Torguard often doesn't work with Netflix or BBC iPlayer.

TorGuard is a well-established US-based VPN service that’s been around since 2012 and it promises “complete privacy.” We put this claim the test, and in this TorGuard VPN review we’ll answer all the important questions you have, like:

Before we give you all these answers, though, here’s a brief overview of TorGuard VPN’s main pros and cons:

Can You Trust TorGuard?

TorGuard, which is based in Florida (USA), was founded in 2012 and is owned by VPNetworks LLC, although we couldn’t find much information about this company.

Usually, being based in the US isn’t ideal for a VPN service, but TorGuard’s zero-logs policy means that even if law enforcement request your personal data from TorGuard, it wouldn’t have nothing anything to hand over.

We contacted TorGuard’s customer support, which told us that it would only comply with an “official court ordered ruling” and, even then, it would only be able to submit “blank hard drives.”

In May 2019, TorGuard filed a legal complaint against NordVPN accusing them of blackmail and a potential DDoS attack. The case is still ongoing, but as far as we’re aware, TorGuard has yet to provide evidence to support its allegations.

TorGuard claims not to keep any logs, making it a strictly zero logs VPN service.

What’s more, it doesn’t even temporarily log connection metadata, which isn’t uncommon among VPN services. This means nothing you do while connected to a TorGuard VPN server can be linked back to you.

TorGuard’s international speeds have recently slowed down, and although it’s still fast on shorter distances. Overall, it still falls short of the fastest VPN services.

However, if you want a secure VPN for everyday browsing, downloading and streaming, TorGuard will do the job.

When connected to TorGuard:

TorGuard’s speedy uploads, and same-country ping times of just 9ms, make it a great choice for torrenting and gaming.

Also, we didn’t suffer from any connection or speed drops while connected. Big plus in terms of reliability.

Here are the average speeds you can expect from TorGuard for the popular locations below (connecting from the UK):

See how we test VPNs for an in-depth look at how we measure overall VPN performance.

Choose from 64 cities in 50 countries

TorGuard operates 3,000 in 50 countries, covering most popular nations. It doesn’t release the exact number of IP addresses (we can guess at least 3,000 – one for every server – but it’s probably much higher).

A choice of servers in 10 US cities isn’t the best we’ve seen from a VPN service, but TorGuard has a good spread of locations covering the entire country.

There’s also city-level choice in a handful of other countries (two cities each), such as:

It’s pretty unusual to see no city-specific servers in the UK, though.

If you’re located there, or want to connect to those regions, CyberGhost VPN and its much wider range of server locations will better meet your needs.

TorGuard has recently removed it’s Luxembourg server location after an “unauthorised equipment seizure by authorities”. This is a shame – but it’s good to see TorGuard being proactive in protecting its users’ privacy and security.

Good for torrenting but no Netflix

TorGuard isn’t a reliable VPN service for streaming, unless you want to pay an extra $7.99 per month for a dedicated streaming IP address (not good for privacy, though).

Unfortunately, it doesn’t work with Netflix anymore, although it previously worked on a handful of US servers.

Also, TorGuard can’t unblock BBC iPlayer, which has been the case for several months.

However, TorGuard is an excellent VPN service for torrenting, as P2P activity is permitted on all of its servers.

Good download (and upload) speeds, a VPN kill switch and a transparent no-logs policy are all great features of TorGuard that will satisfy torrenters.

Safe choice for users in China

TorGuard claims to work in China, despite the country’s crackdown on VPNs. This is thanks to its proprietary Stealth VPN protocol, STunnel.

You can enable Stunnel by simply ticking a box in the TorGuard app’s settings, which adds a second layer of encryption to your VPN connection.

Stunnel wraps traffic in a layer of TLS encryption to make it harder to identify as VPN traffic.

So, using TorGuard makes it easier to bypass the so-called Great Firewall of China and unblock web content.

According to TorGuard’s user forums, it works pretty well if you connect to its Hong Kong, Japan, Singapore, Taiwan, or US servers.

Just beware that TorGuard’s website is currently blocked in China, so you’ll need to download the VPN before you travel.

You can also use TorGuard in other highly-censored countries like Iran, Turkey, Saudi Arabia and the UAE.

Can be installed on all popular platforms, including routers

TorGuard has VPN applications for:

It has has an app for Linux devices – it’s one of very few VPNs to provide a native GUI client for every distro of Linux.

You can also set up TorGuard on your home router (read our VPN router installation guide here), or you can buy a pre-configured router from TorGuard’s website.

You can use TorGuard with a wide range of games consoles and streaming devices, by connecting them to a router that’s running the VPN software.

There’s also a custom TorGuard VPN app for Amazon’s Fire TV Stick, which is very easy to download and install onto your Firestick. 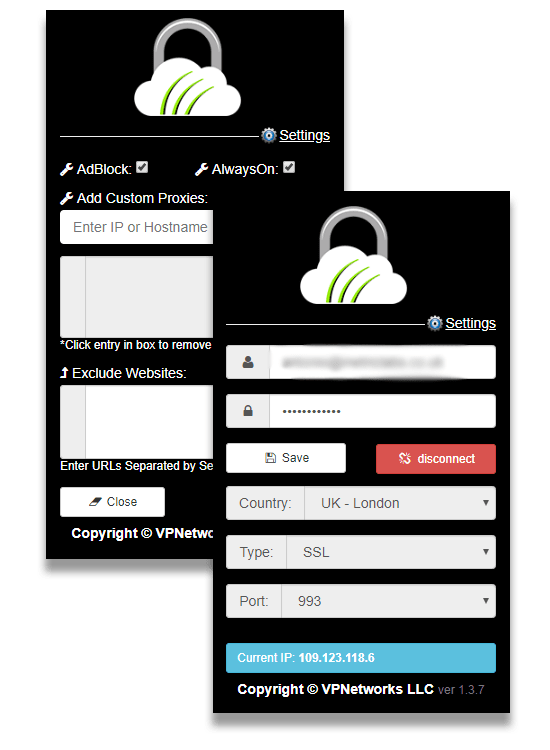 TorGuard’s addons are not true VPN extensions as they won’t encrypt your browser traffic. For extra security, use them with TorGuard’s desktop app running at the same time.

TorGuard is a very secure VPN service and it will keep you safe online.

Not only does it use the highest level of encryption, AES-256, but the TorGuard Windows app also defaults on startup to OpenVPN, currently the strongest VPN protocol.

It also fully supports the ascendent VPN protocol Wireguard on all platforms, and was one of the earlier VPNs to do this. TorGuard includes a VPN kill switch, and it owns its DNS servers, ensuring your personal data is protected.

And, there’s a ton of advanced settings to satisfy even the most security-conscious users as well, including: 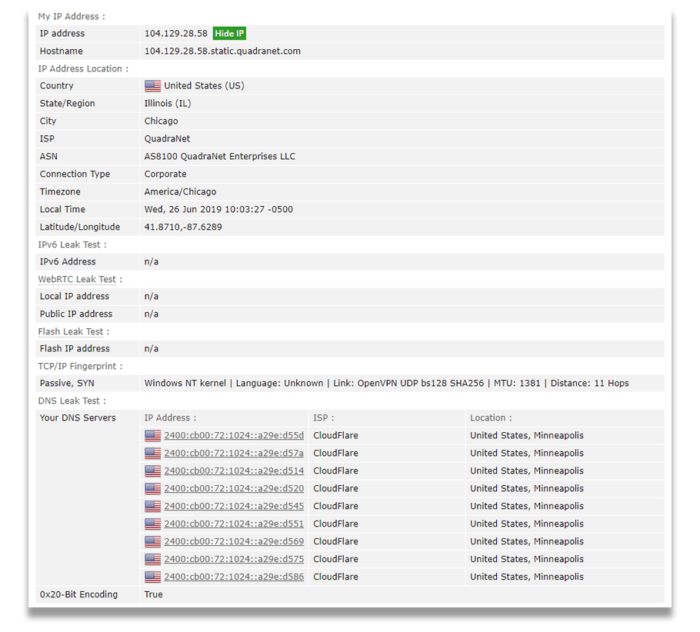 And to top it off, we didn’t detect any DNS or IP leaks in our latest tests.

How to Install & Set Up TorGuard

TorGuard’s custom VPN apps are best for those looking to fine-tune every aspect of the app, right down to the level of handshake encryption being used.

Disregarding the cluttered design, we can confidently say that TorGuard works well and does the job with minimal fuss. The apps operate on the OpenVPN protocol and you can manually select UDP or TCP if you require.

TorGuard has a lot of advanced settings, but thankfully these are very sensibly organized within the apps. These enable you to add extra layers of security, switch to using TorGuard’s proxy servers, or even execute custom scripts.

Using TorGuard is as easy as downloading and installing the VPN app from the website. Simply sign up for a TorGuard account, visit the downloads section and click the button for the device you wish to use the VPN on.

TorGuard has decent customer support for a budget VPN service.

The website is full of useful information, but it can be difficult to navigate. There’s also no real effort by TorGuard to explain complex concepts or use simple English.

The forum is good for finding answers to specific questions, though.

It’s good to see live chat is in use, although it isn’t available 24/7. Support agents also tend to use pre-written responses, but generally come across as friendly.

Obviously, you can send a support request via email, and replies are generally quick.

TorGuard costs $9.99 if you just sign up for a single month, which is pretty reasonable compared to other VPN services, but bigger savings can be found on longer plans. Both the six and 12-month plans are just $4.99 per month, saving you 50%.

Further savings can be found on the 24-month plan, though – but TorGuard’s website hides it.

Click on any payment plan and you’ll be taken through to ‘Step 2’ of the sign up process. There you’ll see an option to choose the billing cycle – the final option is ‘$99.99USD Biennially’, which equates to a healthy 58% off the standard monthly rate.

Don’t forget to use our 50% off lifetime coupon (see above) to get TorGuard for even cheaper.

TorGuard has a 7-day free trial you can take advantage of. It offers the full service minus the option for a dedicated IP and some streaming compatibility. It is completely ‘no questions asked’, though, and TorGuard will refund your payment if you are “less than 100% satisfied” with the VPN service.

According to TorGuard’s customer support team, you can expect your money to be refunded to your account within 3-4 days.

TorGuard offers an extensive range of payment options including all major credit and debit cards, PayPal and a long list of cryptocurrencies. Options such as Alipay and Neosurf are also available through its partnership with Paymentwall.

Do We Recommend TorGuard?

No logs, a good number of servers, fast local download speeds, and it even works in China: overall, TorGuard is a very good VPN.

It’s not perfect, though. TorGuard’s international speeds need to improve, the apps look old, and it doesn’t consistently unlock Netflix or iPlayer.

Basically, it’s a good VPN for torrenting but not for streaming. So, if you want a full-package VPN then the two VPN services below will certainly please you more.

If TorGuard's high price (or long contract) is proving intimidating, we'd recommend you try PrivateVPN. It's very cheap, and also has a seven-day free trial that requires no payment details to take advantage of. Read PrivateVPN review