Blazing fast speeds, complete online privacy, and instant access to any website from any country are just some of the things that ZoogVPN promises on its homepage.

Do these claims hold any weight? We put ZoogVPN to the test to find out for ourselves.

We’ll also let you know the answers to the following questions and more:

Our review will tell all you need to know about ZoogVPN – the good, the bad, and awful. Here’s a quick summary of what’s to come:

Now that you have an idea of what to expect we’ll get to the juicy bits, starting off with who’s behind ZoogVPN and what data it collects about you.

ZoogVPN was founded in May 2013 by “a bunch of networking geeks and techies” – their names are George Agal, Alex Ovan, and Sam Jones.

We couldn’t find any information about them online, though.

The VPN service is owned by Zoog Services IKE, which is now based in Greece following its incorporation in the Isle of Man, a self-governing British Crown Dependency (and frequent tax haven).

Zoog provides an address on its website, which isn’t as common in the VPN industry as we’d like it to be.

Greece isn’t part of the 14-Eyes international intelligence-sharing alliance, which is a positive, but it is a member of the EU, which still engages in data sharing between member states.

In order to find out what that means for you, let’s take a look at ZoogVPN’s privacy policy.

If you had any concerns regarding ZoogVPN’s Greek jurisdiction – don’t. This VPN is strictly no-logs.

The only thing that Zoog does collect, aside from your email address, is aggregated information about the total upload and download data transferred on its servers. This is used to maintain the VPN service.

None of this information is shared with any other company or party, save for customer emails in cases where they’re required to verify payment (for example with PayPal or your credit card provider).

Next we’ll see if ZoogVPN’s speeds are as pleasing as its approach to privacy.

Uploads and downloads were consistently quick enough for HD streaming and smooth torrenting when we connected to nearby VPN servers.

When connected to ZoogVPN:

Ping times were a little less impressive, but shouldn’t affect the vast majority of users. For a lesser-known product, ZoogVPN’s speeds are very, very good.

Here’s a quick look at how well ZoogVPN performed internationally:

ZoogVPN’s server network is underwhelming at just under 50 physical servers located in 26 countries. The best VPNs have hundreds, if not thousands, of servers.

To make matters worse, we experienced quite a lot of server connection failures during our tests, further narrowing the choice of available locations.

The vast majority of ZoogVPN’s servers are situated in Europe and North America, but there are a handful in Asia-Pacific too.

If you live in South America there’s just one server in Chile, and for those in Africa the only server on the continent is located in South Africa.

ZoogVPN’s website claims that there are “thousands” of shared IP addresses available to users, which should go some way to reducing server congestion.

As is expected for such a small VPN server network, ZoogVPN doesn’t provide city-level servers in many countries, but there are two options in Germany and eight in the US.

If you need more server choice then you’ll find plenty on our list of the top five VPNs for 2020.

They unlock a variety of streaming services including Netflix, BBC iPlayer, and Disney+ – all of which we found worked during our tests.

You can easily find out which servers work with your favorite streaming service on ZoogVPN’s network status page.

As for the video quality, ZoogVPN’s speeds are more than good enough for HD streaming with little buffering.

ZoogVPN allows torrenting and P2P traffic, but only on some of its VPN servers.

These P2P-friendly servers are clearly marked within the app’s server locations list, and span 16 countries including Canada, the US, and a handful of servers in Europe and Asia-Pacific.

ZoogVPN’s no-logs policy will be attractive for torrenting fans, as will the VPN kill switch, which prevents your IP address from being exposed to peers and your ISP should the VPN connection drop.

Obfuscation tools may work in China

It’s hard to say for sure whether ZoogVPN can be used to consistently bypass internet censors in China.

That said, the Windows and Android VPN apps do have ZoogVPN Shadowing – an extra obfuscation tool designed to make VPN traffic look like normal internet traffic in order to help you beat censorship blocks.

It’s a promising sign, and will almost certainly do the trick in slightly less heavily censored countries like Russia and the UAE, but it’s a fairly recent development and we can’t be sure that it works reliably in China yet.

For now, we recommend you use an effective VPN service – like ExpressVPN.

Like most VPN services, ZoogVPN comes with custom apps for the following desktop and mobile devices:

It is possible to install the software on Linux and routers but it requires some manual config.

You can use ZoogVPN on up to five devices at once using just one subscription.

For those who want to protect their streaming devices, ZoogVPN provides a great solution: custom apps for both Amazon Fire TV Stick and Android TV.

What about smart TVs and games consoles?

Well, you can use ZoogVPN use on pretty much any internet-connected device by installing the software on a supported router. It’s a pretty complex process, but ZoogVPN provides simple setup instructions on its website.

ZoogVPN doesn’t provide any browser extensions, but this isn’t much of a loss.

While browser add-ons offer a more light-weight experience, they don’t provide the same levels of protection as VPN desktop and mobile apps do.

If you really need one take a look at the following guides we’ve put together:

ZoogVPN doesn’t provide anything out of the ordinary when it comes to protocols and security features, but it does include the bare essentials.

First things first, what protocol and encryption does it use?

We were happy to find out that ZoogVPN supports OpenVPN – one of the most secure protocols available – and traffic is encrypted with AES-256, a cipher considered uncrackable.

The iOS app runs exclusively on IKEv2/IPSec, a fairly new VPN protocol that is fast, safe, and particularly useful for mobile devices that dip in and out of WiFi and 4G.

ZoogVPN doesn’t have any advanced features, like split tunneling and Double VPN, but it does have a VPN kill switch for Windows and Mac, which is responsible for preventing personal data leaks should the VPN connection drop suddenly. 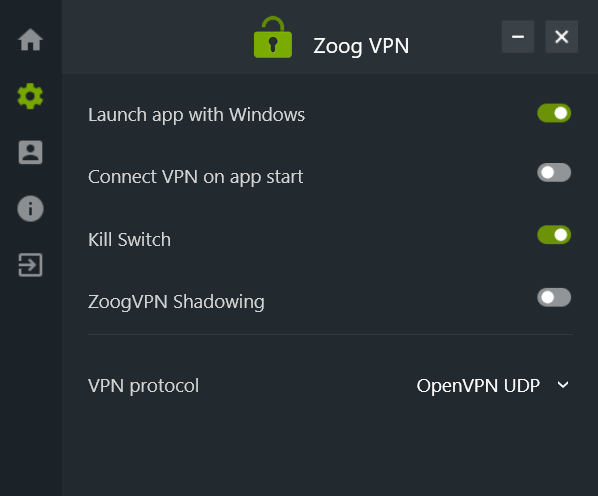 Oddly, a member of the live chat support told us that the feature was broken: 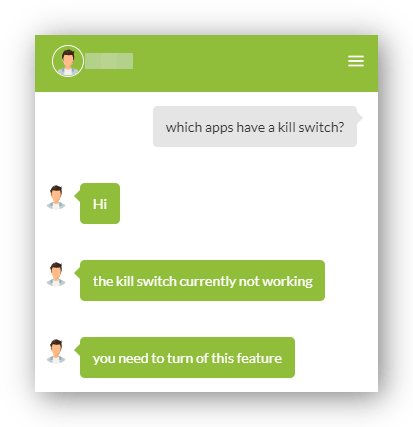 As the live chat support had proven unreliable for our previous enquiries we got in touch with ZoogVPN’s email support to clarify the situation.
Here’s the response we got:

“The online chat consultant may have been misinterpreted when he responded regarding the Kill Switch. We offer Kill Switch on Windows and MacOS. There are no confirmed issues on either of the platforms.

“We have seen some users report various experiences with the Kill Switch functionality but we have not been able to reproduce such scenarios internally and thus those cases are unconfirmed.

“We have been extensively using Kill Switch on Windows and MacOS without any major issues.”

While this eroded our trust in the ZoogVPN, somewhat, we did find that the kill switch kicked in while we were connecting to servers. 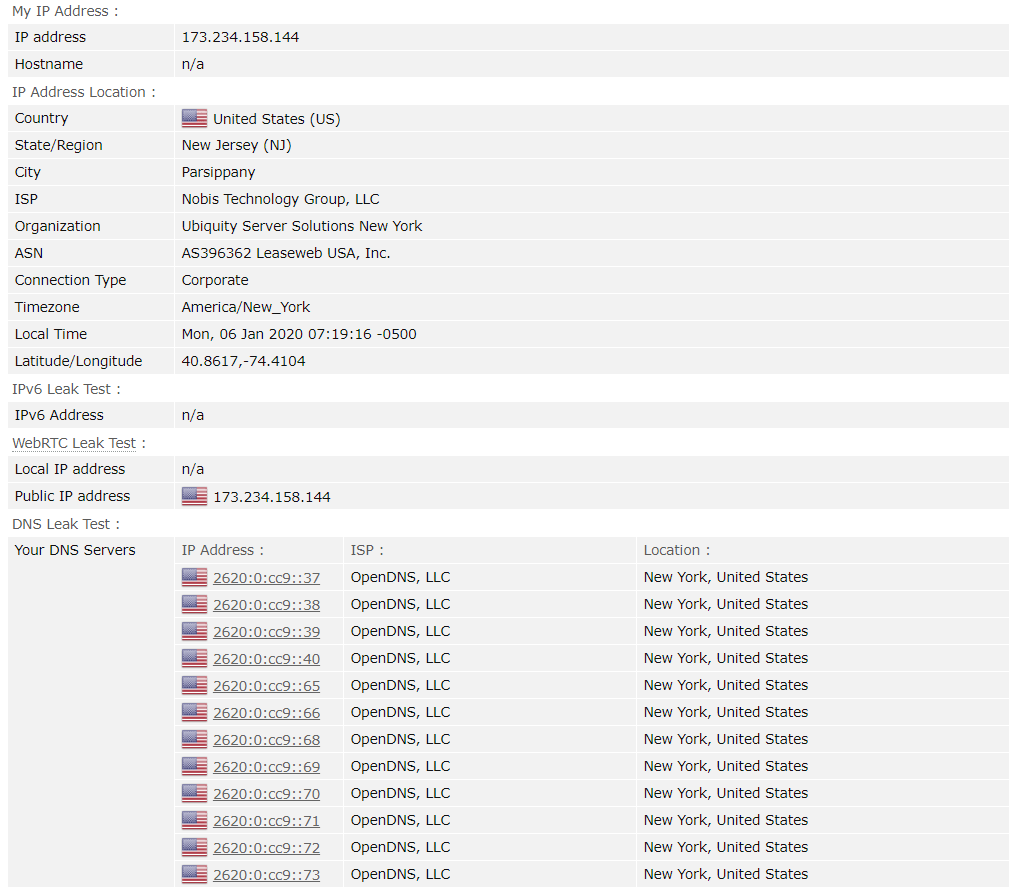 We test from the UK. You can see that ZoogVPN is effectively hiding our IP address.

As you can see, ZoogVPN relies on third-party DNS servers, which isn’t ideal. That said, OpenDNS is secure enough.

Easy to use, except for tons of connection failures

How to Install & Set Up ZoogVPN

ZoogVPN’s apps will be immediately familiar to anyone who’s ever used a VPN before, and super intuitive to anyone who hasn’t.

After a quick and easy setup, the ZoogVPN app displays a big central connect button and a server list sorted in alphabetical order.

There’s not many options to play around with – just a choice of protocol and a kill switch toggle.

Sounds decent enough, but when you throw in a bunch of connection failures ZoogVPN’s ease of use plummets.

On several occasions, we waited an age for the VPN to connect only for it to give up on us. Not good.

While only available intermittently, ZoogVPN’s live chat support is useful to have for quick answers to simple questions.

For more technical questions we were told to contact ‘Level 2 Support’ via email.

We waited several hours for a response, but replies were helpful when they eventually came.

There’s a basic FAQ section on the ZoogVPN website, along with setup wizards for numerous platforms, but the online resources are far from comprehensive.

One of the cheapest VPNs available

If a relatively unknown VPN service is to really challenge the best VPN providers, then it also needs to come in at an attractive price point, and ZoogVPN’s is an absolute jaw-dropper.

At $1.75 per month on its two-year plan it’s one of the absolute cheapest fully-featured VPN services we’ve seen. For comparison, the cheapest VPN provider among the very best VPNs is Surfshark at $1.99 per month.

If you’re looking for a shorter commitment the 12-month plan is a steal at $2.99 per month. Even if you pay month-to-month, it’ll cost you an affordable $7.99.

It also accepts payments via Paymentwall, which lets you use various international methods such as AliPay.

ZoogVPN offers a seven-day money-back guarantee for users that paid with credit/debit cards or PayPal, but it comes with some terms.

Do We Recommend ZoogVPN?

Not at the moment. ZoogVPN is promising in some areas – it’s fast and private – but falls down when it comes to stability. We often couldn’t connect to certain servers, which quickly became very frustrating.

ZoogVPN’s price is undoubtedly tempting, but there are a handful of other VPN services around that offer much higher levels of quality for around the same monthly cost.

For roughly the same price as ZoogVPN, Surfshark is far superior, with top-notch security features and easy access to Netflix. Read Surfshark review

PrivateVPN is another really cheap VPN service that doesn’t compromise on quality. It keeps no logs, is quick, and works with all your favorite streaming channels. Read PrivateVPN review

Already use ZoogVPN? Tell us what you think.