VPNArea has a strong no-logs privacy policy, tools for bypassing strict censorship, and good features for streaming. It unblocks Netflix, and it works on Fire TV Stick. VPNArea's apps are not the easiest to use, but overall it's a very good VPN.

With so many big name VPNs out there, is there any reason to stray from the crowd? VPNArea will certainly be hoping so.

You may not have heard of it, but VPNArea claims to be able to do it all: a secure service that keep you private, beats online barriers, unlocks streaming content, and more.

We tested it extensively for this VPNArea review to find out:

After hours spent putting it through its paces, our key conclusions on VPNArea are listed below.

VPNArea was founded in 2012 and is owned by Bulgarian-based company Offshore Security LTD.

Its headquarters are currently in Varna, Bulgaria, which would usually be a bad choice for a VPN service given it’s subject to intrusive EU surveillance laws and data-sharing agreements.

However VPNArea’s strict no-logs policy means that its jurisdiction is nothing to be concerned about, as even if a third party requested your personal information, VPNArea would not be able to hand it over.

Most VPNs will claim not to collect any logs, but VPNArea is one of the very few VPN services we’ve reviewed that is truly no-logs.

It does not monitor, record or store “any login dates, timestamps, incoming and outgoing IP addresses, bandwidth statistics or any other identifiable data of any VPN users.” This means nothing you do while connected to VPNArea can be traced back to you.

VPNArea is a very fast, reliable VPN service if you’re mainly planning on connecting to the same country or one nearby – downloads of around 90Mbps are more than quick enough for streaming on multiple devices at the same time.

However, VPNArea isn’t quite as consistent if you’re going to be connecting internationally on a regular basis. It’s still speedy, but its speed reliability just doesn’t compare against the current fastest VPNs.

When connected to VPNArea:

VPNArea is a strong choice for gamers, too, thanks to its quick same-country latency of just 8ms. It also produced very fast upload speeds of around over 90Mbps in some locations, which is ideal for torrenting. Even better, VPNArea’s connections were incredibly reliable with no drops at all.

Here are the average speeds you can expect from VPNArea from a handful of popular locations (connecting out from the UK):

For more information on exactly how we measure VPN performance, take a look at How We Test VPNs.

VPNArea has one of the larger VPN server networks we’ve seen in our testing, and is present in 65 countries around the world.

There are city-level server options in a handful of VPNArea’s locations, with the broadest range of choice in the US. Users located in the US can choose from 42 VPNArea servers spread over 11 different cities, which is great news for performance. 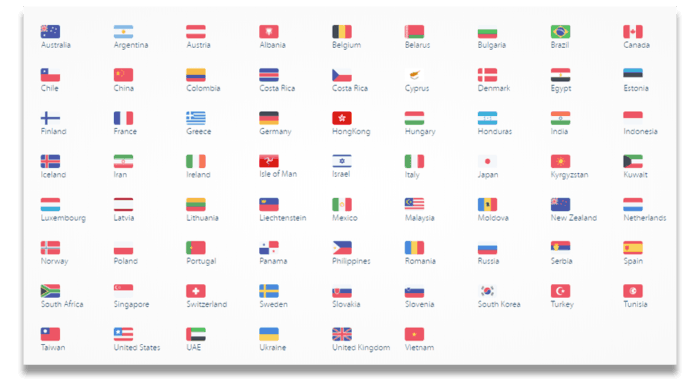 As usual, Europe and North America have the best server coverage, however there’s a lot of choice outside of these regions too, which is refreshing to see. There are no obvious gaps in VPNArea’s server network, but it would be nice to see some more city-level options in the future.

We really like that VPNArea owns and operates its own DNS servers, however we were disappointed by the total number of servers at just 200. There’s also only one shared IP address per server, which can mean bad news for performance, but is also excellent for privacy.

Thanks to VPNArea’s optimized streaming servers, it was easy watching Netflix through both the US and UK servers (USA-0-NFLX and UnitedKingdom-0-NFLX).

VPNArea’s excellent speeds mean that the video and audio quality is great, too. 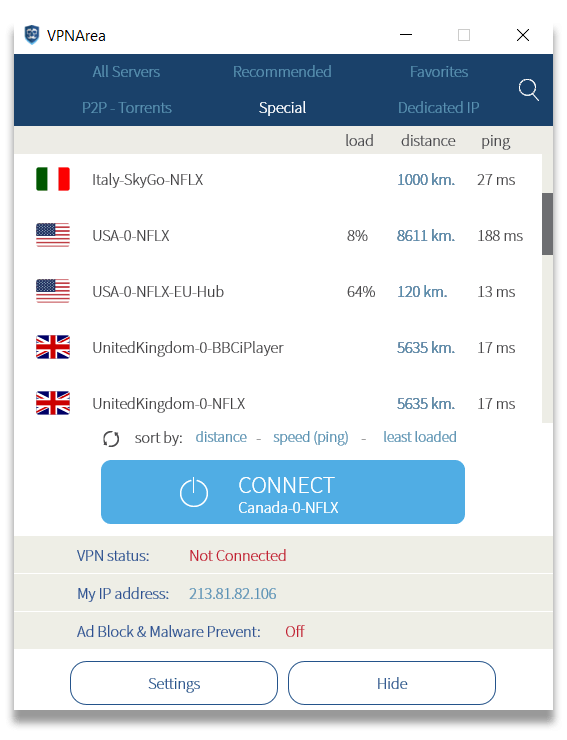 We asked VPNArea’s live chat agents when they expected the issue with BBC iPlayer to be resolved, and they told us they didn’t have a timeframe but would be notifying users of the problem. BBC iPlayer fans should therefore use one of these tested and working VPNs instead.

VPNArea also unlocks the Canadian and Italian Netflix libraries, and has a dedicated server for streaming Sky Go in Italy.

Torrenting is permitted on all VPNArea servers, with many optimized for P2P activity.

Combine this with fast download and upload speeds, no IP or DNS leaks, and a VPN kill switch and you have a very appealing VPN for torrenters.

VPNArea’s solid no-logs policy is another bonus for torrenting, and it works well with Kodi too (here’s their kodi setup guide).

VPNArea is a good choice for China, if you’re planning on using it on your desktop computer.

It has X-Stunnel VPN servers in a ton of locations worldwide, which will disguise your connection as normal HTTPS traffic and allow you to bypass the so-called Great Firewall of China.

VPNArea offers these servers in China, Japan, Singapore and the US (as well as a few other countries), so you can connect to a nearby location for the best possible speeds, too.

These X-Stunnel VPN servers are only available on Windows and Mac devices, though, and there are no manual workarounds for iOS or Android, so mobile users should avoid.

VPNArea’s obfuscated servers mean that it’s also a reliable VPN service for those in other countries with oppressive censorship regimes such as Turkey, Saudi Arabia, Iran, and the UAE.

Can be used with tons of different devices, including routers

VPNArea offers custom VPN apps for a ton of popular devices, including:

You can also set up VPNArea manually on a handful of other platforms, including routers –  there are instructions for all of these on VPNArea’s website.

If you don’t fancy getting your hands dirty, you also have the option of buying a pre-configured VPN router, either direct from VPNArea or through an independent company.

VPNArea can be used with loads of different games consoles and streaming devices by connecting them to a router running the VPN, as this will automatically protect all of the internet-connected devices in your home.

VPNArea can be installed on Amazon’s Firestick and on Kodi too, with some manual configuration. If you want a simpler setup, take a look at our recommended VPNs for Firestick and Kodi.

VPNArea isn’t the best option if you’re looking for a plug-and-play solution for your games console, but it’ll do the job well enough. If you’re looking for something a little more straightforward, take a look at our ExpressVPN review – its MediaStreamer service makes life a lot easier.

If you’re going to be installing VPNArea on individual devices, you can use it on up to six of them at the same time – that’s about the average we see from most VPN services.

If you want to use a VPN through your web browser, read our dedicated guides to VPNs for Chrome and VPNs for Firefox.

VPNArea will keep you very safe online. The desktop app uses OpenVPN, the most secure VPN protocol, and you can even toggle between UDP and TCP. There’s also the option to connect using IKEv2. VPNArea’s VPN connections are secured using AES-256 encryption.

As well as the essential VPN kill switch feature, protecting you from any potential connection drops, VPNArea also prevents DNS, IPv6 and WebRTC leaks. Even better, it operates its own zero-log DNS servers to keep your personal information private. 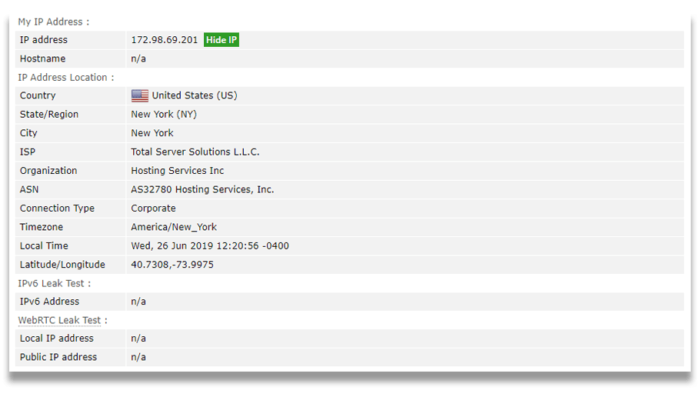 What we saw on browserleaks.com while connected to VPNArea’s New York server

Additionally, VPNArea operates Double VPN servers, providing you with an extra layer of privacy when you’re connected to the VPN. There’s also a built-in ad-blocker and malware protection.

Port forwarding is available on VPNArea – but you’ll need to get in touch with support to request it be enabled on your account. You can also get a VPNArea dedicated IP for an extra annual fee.

How to Install & Set Up VPNArea

VPNArea’s desktop app has some excellent features but also a few annoying quirks that ruined the experience for us a little. There’s no main screen as such, so you’re just redirected to the VPN server list once you’ve logged in.

The VPN server list is split up into useful tabs such as torrenting, streaming and obfuscated – you can sort the servers by distance, speed or percentage load too. The VPN settings all come with simple on/off toggles and we particularly like the contextual information that’s provided.

If this is the kind of thing you’re looking for, consider ExpressVPN, which offers full-featured extensions for all popular browsers, or NordVPN which provides less-secure (but quicker) proxies.

VPNArea’s customer support is good enough for a provider of this size but we don’t like that some of the resources (such as setup guides) are limited to paying customers only.

On the website, there are loads of in-depth FAQs covering a variety of topics from encryption to the security of different VPN protocols.

We were pleasantly surprised that VPNArea offers a genuinely 24/7 live chat feature with friendly, helpful agents. We always received a response within a matter of minutes, too.

VPNArea is a fairly cheap provider in comparison to other VPN services of a similar quality.  VPNArea’s monthly plan is the most expensive option at $9.90, but you can drop this right down to $2.99 on the three-year plan, saving you 70%. There’s also an annual plan at $4.92, a reduction of 50%.

VPNArea offers loads of different payment options, including all major credit and debit cards, PayPal and Bitcoin. You can also pay using a ton of international methods, such as WebMoney, Alipay and Hipercard, which is great for those living abroad.

VPNArea doesn’t provide a free trial, but instead offers a ‘no questions asked’ money-back guarantee, which is a different length depending on the plan you signed up for. The 12-month and three-year subscriptions come with a 30-day refund period, whereas the 1-month option is 14 days.

In order to apply for a refund, all you have to do is contact VPNArea via live chat or email, and your refund will be sent to you within 48 hours (VPNArea claims that 98% of users receive their refund within just 15 hours).

Do We Recommend VPNArea?

VPNArea is something of a hidden gem. It’s far from the most popular VPN on the market, but we have no hesitation in recommending VPNArea.

It’s not perfect (the app can be awfully frustrating at times), but VPNArea’s excellent list of features and super-secure logging policy are real highlights.

ExpressVPN excels in most areas, but it's an especially good choice if you don't want to have to worry about a frustrating or clunky app - ExpressVPN is as easy to use as they come. Read ExpressVPN review

Put off by VPNArea's inconsistency with BBC iPlayer? CyberGhost is a super cost-effective way to access iPlayer, not to mention tons of other popular streaming services. Read CyberGhost review