Find out how to set up and install a VPN on iOS in this easy-to-follow guide.

It’s very easy to set up a VPN on your iPhone or iPad.

With a VPN installed you can connect to public WiFi safely, use personal banking or email apps without being spied on, and watch Netflix from different countries.

The four ways to install a VPN on iPhone are:

In this guide, we’ll walk you through each method step-by-step.

What You’ll Need to Set Up a VPN on Your iPhone, iPad or iPod:

NOTE: If you haven’t chosen a VPN service yet, check out our list of the best iPhone and iPad VPNs.

The simplest and safest way to install a VPN on your iPhone or iPad is to download a custom app from the Apple App Store.

That’s not always possible, though. As some VPN services don’t provide apps for iPhone or iPad. If that’s the case, you’ll need to go to methods 2, 3, or 4.

You should also skip ahead if you’re in a country that has removed VPN apps from the App Store (like China).

It’s really quick and easy to install a custom VPN app on your device, and these apps are generally very intuitive once downloaded, too.

Here’s some simple steps to help you install a custom VPN app on your iPhone or iPad in just a few minutes:

This is the safest and easiest way to use a VPN on your iOS device, but if your VPN provider doesn’t come with a custom app for iPhones and iPads, keep reading to find out the next best way to install the software.

If you can’t (or don’t want to) install an app on your phone or tablet, iOS and iPadOS devices do come with a built-in VPN solution.

While this method saves space on your device, the built-in VPN feature doesn’t include extra settings like a VPN kill switch or leak blocking, so it may not be as secure as the other methods in this guide.

There’s another catch – you can’t use OpenVPN, our preferred VPN protocol (more on that in Method 3).

Instead, the iOS VPN only supports IKEv2/IPSec and L2TP/IPSec, which we still consider safe to use.

Here’s how to manually configure IKEv2 configuration files with your iOS or iPadOS device:

The process is very similar for L2TP setup, but it may require you to enter a ‘Secret’ in addition to a username and password.

This ‘secret’ is a pre-shared key supplied by your VPN provider. The use of pre-shared keys poses a security risk, though, which is why we recommend sticking with IKEv2 if possible.

You can read more about this in our guide to VPN encryption.

We’ve talked a bit about OpenVPN and how it’s our favorite VPN protocol, known for being super secure and pretty fast, too.

Well, if your VPN provider’s custom app for iOS doesn’t run on OpenVPN – or it doesn’t have a custom app for your device – you may still be able to use the VPN software with OpenVPN on your phone.

Not all VPN services support this installation method, though, so get in touch with your provider to confirm before you try.

And even if your provider does support it, be aware that this setup is a bit more fiddly than the first two methods we’ve shown you.

Still want to try it? Let’s get started.

For this type of setup, you’ll need a desktop computer as well as your phone – Microsoft Windows, macOS, and Linux are all fine. For this demonstration we’re using a Windows PC.

Here’s how to install a VPN on iPhone using OpenVPN Connect:

You can add more .ovpn files for other server locations after this if you want – the process is exactly the same from Step 3 onwards.

As you can see, this installation method isn’t the easiest one, but it does provide the best VPN protocol and useful extras like the Seamless Tunnel feature.

The final way you can protect internet traffic on your iOS or iPadOS device is to install the VPN software at router level.

This is useful if you also want to protect a bunch of other devices in your home, including smart TVs and games consoles, that wouldn’t normally be able to support a proper VPN app.

Once you connect your devices to the VPN router all traffic will be encrypted between the router and the VPN server.

A VPN router encrypts the traffic of every device on your WiFi network.

However, the setup is quite advanced and may require you to buy new router hardware, which can be very expensive.

Once you leave your home and connect to other WiFi hotspots or use mobile data, your device will no longer benefit from VPN encryption.

It’s by no means the best way to use a VPN on your iPhone.

But if you do want to protect multiple devices in your home using a VPN router, we recommend also installing a VPN on your iPhone or iPad to switch on while you’re out and about.

Setting Up a VPN on Your Router

There are a few different ways to set up a VPN on your router:

We’ve put together a separate guide to installing a VPN on your router, which comes with in-depth step-by-step instructions and tips.

While we’ve tried to give you the best possible advice for how to install a VPN on your iPhone or iPad, every device and OS version is slightly different, and the steps may not look exactly the same as the ones we’ve provided in this guide.

If you run into any issues you should first get in touch with your VPN provider’s customer support team who will be able to assist you and walk you through the installation process.

Do I Need a VPN on My iPhone? 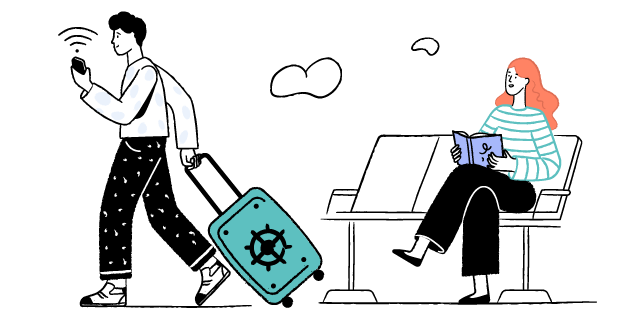 The simple answer is yes.

Whether you exclusively use your phone at home or you carry it with you wherever you go, it’s important to protect yourself against threats to your online freedom, security, and privacy.

Here’s why you should use a VPN on your phone at home:

The biggest reason for using a VPN while on the go is to secure public WiFi.

Connecting to free WiFi is really convenient, but it can be dangerous too.

Hackers can exploit insecure networks to steal your personal data.

So, next time you use the free WiFi in your favorite café make sure to connect to a VPN before you start browsing.