Using a VPN in the United States is a necessity for American residents and visitors alike. The country’s invasive privacy laws mean the government and your ISP can track your every move online.

VPN services don’t just protect your privacy, though. They also unlock geo-restricted web content around the world. In fact, with the best VPN for the US you can access foreign websites and even watch geo-blocked sporting events.

Want to use a US VPN without paying a cent?

The good news is that you can. While many free VPN apps are unsafe and must be avoided, there are safe and trustworthy ones. We’ve tested hundreds of free VPNs and the free virtual private networks below are the best for the US.

The five free VPNs we recommend have fast US servers that will give you an anonymous US IP address. You’ll be able to use the internet anonymously and securely, and unlock US web content. Right now, the best free VPN for the US is Windscribe.

Main Features of a Free US VPN 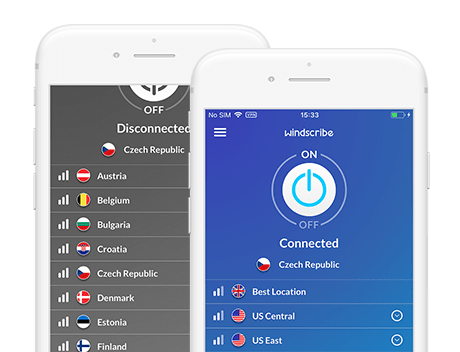 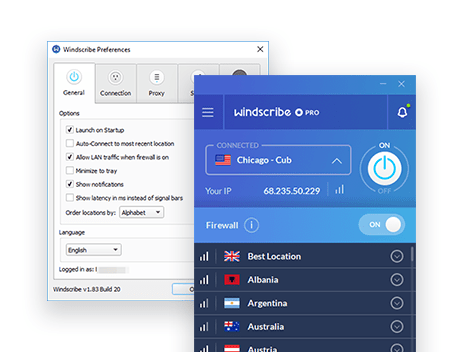 Windscribe is the best free VPN for the US, and our most recommended free VPN overall.

There are nine Windscribe VPN servers in the United States available to free users.

Windscribe Free produces some pretty fast speeds (for a free VPN) – the closer you are to the VPN server, the quicker the speeds will be.

One particular feature that stands out from other free VPN services is Windscribe’s ability to be used on as many devices as you want. There’s no limit.

Despite being the best free VPN around, Windscribe’s free service is far from perfect.

The one major downside is Windscribe Free’s 10GB data cap, which restricts the amount of internet data you can encrypt and protect each month.

However, this data cap is one of the most generous we’ve seen from free VPNs, but you can’t use it to watch Netflix as it remains blocked. This is the case with most free VPNs.

There’s also no (human) live chat support if you get stuck, and Garry the live chat bot ranges from fairly useful to downright infuriating.

What’s the Best Free VPN for the USA?

The best free VPN for the USA is Windscribe – you can choose between eight VPN server locations within the country: 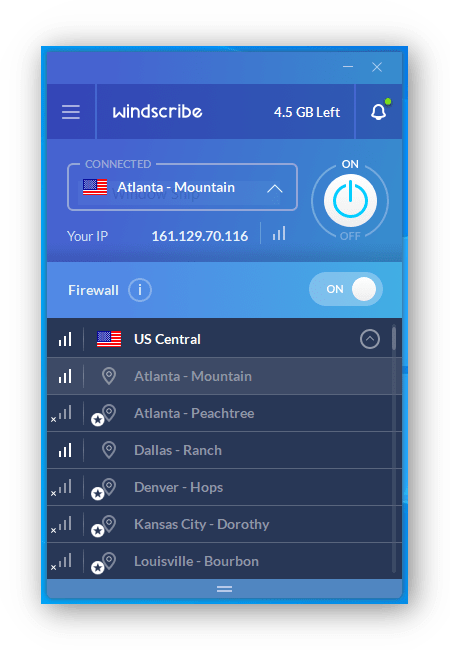 Above all, Windscribe is safe to use – unlike many other free VPNs on the market.

However, if you want the absolute best VPN for the USA you’ll have to pay for it. Most free VPN services come with restrictions including speed throttling and data caps.

If want unlimited data usage, loads of city-level VPN servers in the US, and the best speeds, we recommend ExpressVPN.

Do I Need a Free VPN in the US?

Yes, you absolutely do.

If you live in the US you have access to some of the best streaming content in the world, so why is it still necessary to use VPN?

In short, the US is well-known for being a total privacy nightmare, particularly in light of Edward Snowden’s leaks in 2013.

You need to use a VPN if you want to ensure your online activity remains private.

Not only does the US government (the CIA, FBI, and NSA especially) monitor web traffic constantly, ISPs also no longer need your permission to share your confidential data with third parties.

The US government is also part of the Five Eyes intelligence-sharing alliance, meaning that your personal information could cross borders, too.

The websites you visit, the links you click on, and the things you buy online all build up a comprehensive online profile that could be used and abused by third parties.

You could be put under scrutiny simply for searching for one suspicious word.

Using a VPN encrypts all of your internet traffic and hides your original IP address, a piece of data that can be used to identify you online.

Without a VPN you also put yourself and your personal details at risk of hacking when using public WiFi hotspots in the US (and abroad, too).

Your entire online identity can be sold for around $1200 on the dark web. That’s scary stuff.

VPNs can also prevent advertisers from targeting you with tracked ads.

Aside from the wide array of online privacy and security issues associated with the US, Americans are also subject to sports blackouts.

This means that certain regional and national sporting events are unavailable on the streaming platforms that usually broadcast the games.

Nobody wants to watch a blank screen when their favorite team is playing, so you’ll need a VPN to get past the blackouts.

While censorship isn’t as common on a government-level as, say, China, some institutions such as schools, colleges, and libraries often put restrictions on the content you can view while connect to their network.

A VPN can help you to evade institutional censorship and blocks, too.

All considered, using a VPN in the US is a no-brainer.

Are Free VPNs Legal in the US?

Yes, it is perfectly legal to use a VPN in the US.

There are no laws in the US that prohibit internet users from using a VPN.

A VPN’s main purpose is to protect your personal data and hide your true IP address, and this is perfectly legal.

In fact, a lot of major companies actually use VPN software to protect sensitive data from potential hackers, as well as to allow employees to access company files when working remotely.

One thing to remember when using a VPN, though, is that you’re not exempt from other laws, particularly those regarding copyright.

This means that you shouldn’t use a VPN to do anything that you wouldn’t do without one.

It’s really easy to set up a free VPN for the US if your chosen service offers custom apps for your preferred devices.

Our recommended VPNs above have free apps for Microsoft Windows, Apple MacOS, Android, and iOS (you can find the best services for each platform by clicking the relevant link).

Simply download and install the relevant VPN software on your device, and log in with your credentials. 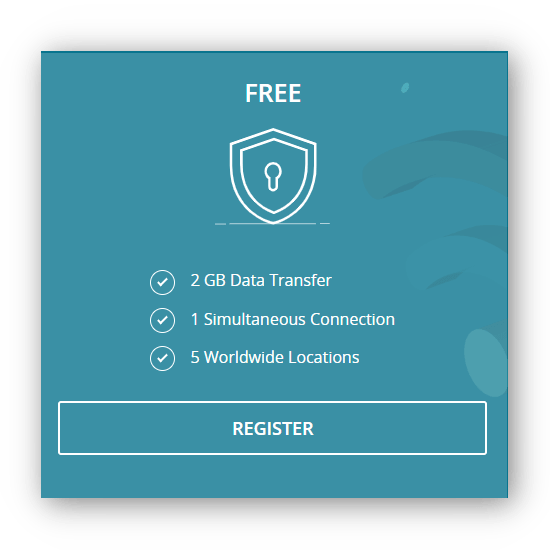 Once you’ve logged in, you’ll want to check the security settings and make sure that the VPN kill switch and IP leak protection features are enabled.

If you can choose the VPN protocol, we recommend OpenVPN for the best balance between privacy and performance.

Now choose the VPN server you’d like to connect to – the closer to your actual location it is the better the performance will be.

If you want to set up the VPN on a device, which your VPN doesn’t have a custom app for, check out our ‘How To Install a VPN’ guides for step-by-step installation instructions, including routers.

Can I Watch US Netflix with a Free VPN?

Most free VPNs don’t work reliably with Netflix, including the VPNs we selected in this guide, except for Windscribe.

When you use a VPN that doesn’t work with Netflix, you’ll see this annoying error message:

“Oops, something went wrong… You seem to be using an unblocker or proxy.”

Sometimes the error message will go away if you clear your cookies and try a different VPN server, but that’s not always the case.

For the fastest and most reliable streaming experience, we recommend using a VPN that still works with Netflix. Our current top pick for US Netflix is ExpressVPN.

Remember that using a VPN won’t allow you to watch Netflix for free – you’ll still need a subscription to the service.

How to Get a Free US IP Address

Perhaps you’re an American on vacation and you want to watch your favorite local shows from abroad. How do you do that?

You can visit American sites and streaming services by connecting to a free VPN server located in the US, as this will give you an American IP address.

If you want to watch US Netflix or Hulu be sure to check that your VPN service can get past the blocks that the streaming services impose on VPNs.

Not many free VPN services work with Netflix and Hulu, though, so you’ll have to buy a premium VPN subscription if streaming is a priority.

Once you’ve connected to a US VPN server, you’ll be able to access all the websites you usually visit at home.

Be sure to double check that you have an American IP by running a VPN leak test on browserleaks.com. 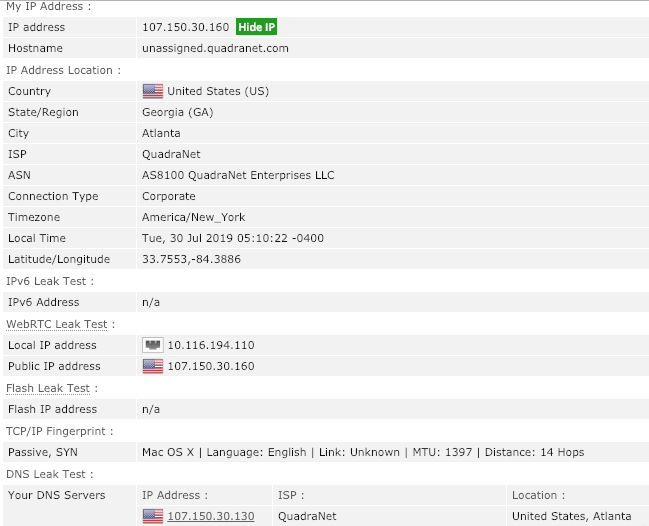 Windscribe Free leak test results connected to a US VPN server. We test from the UK.

If you need a state-specific IP address – to get around sports blackouts, for example – you will need to use a VPN service that provides VPN servers in that particular state.

Once you have set up the VPN software, simply find the VPN server you need and click connect.

You’ll be watching your favorite baseball team play in no time.

Note that free VPN services rarely come with loads of US city or state-level VPN servers, so you may need to pay for a premium service if your state isn’t covered.

You can check that your city or state is covered by visiting the server locations page on the VPN provider’s website, or by getting in touch with the VPN’s customer support team.

Which VPNs Are Based in the US?

Some VPN services are based in the US. Here are our reviews of some examples of American VPN companies:

While the US is far from the ideal place for a VPN to set up shop due to the serious privacy issues associated with the country, it shouldn’t be an issue if the VPN service doesn’t log users’ connection data or personally identifiable information.

If you are looking for the highest levels of online privacy it’s best to opt for a no-logs VPN service based in a privacy-friendly jurisdiction, like NordVPN.

Jump to the best free VPNs for the US