See our full methodology in how we review VPNs.

Avira's free VPN is one of our top free VPNs. It's a simple VPN that uses the OpenVPN protocol, AES-256 encryption, and doesn't store user web logs. It can access US Netflix on mobile but monthly data is limited to just 1GB.

Avira’s free VPN service promises to turn you into an “online phantom,” but is this really possible when you’re not paying a dime for it?

Many free VPNs can actually put your privacy at risk, so we had to put the free version of Avira Phantom VPN to the test. In this review, you’ll find out all there is to know about this VPN including: how safe it is, if it keeps logs and if it works with Netflix.

Before fully diving into this Avira free VPN review, here’s a summary of this VPN’s benefits and drawbacks.

Who is Avira Phantom Free VPN?

A base of operations outside of 14-Eyes or EU jurisdiction is preferable.

Avira's German jurisdiction is less than ideal for privacy, but it's minimal logging policy and strong track record make up for that.

Avira launched Avira Phantom VPN in 2016, but the company itself has been around since 2006.

Even before then, Avira’s antivirus software was developed back in 1986 by its predecessor, H+BEDV Datentechnik GmbH, so the company has been around for a long time.

Avira currently has its headquarters “by the shores of Lake Constance” in Tettnang, Germany, but it also has offices in China, the Netherlands, Romania, and the US.

Even better, Avira states in its privacy policy that although it will comply with data requests from public authorities, it can’t hand over personally-identifiable data as it doesn’t collect any.

We were a little disappointed at how difficult it was to find Avira Phantom’s privacy policy on its website. We eventually located it after a long period of trial and error.

We discovered that Avira VPN only logs a very minimal amount of anonymous connection metadata.

The only information Avira Phantom Free collects is:

We really like that Avira Phantom Free doesn’t log or monitor any websites you visit, your true IP address, or the VPN server location you connect to.

In other words, Avira has no way of tracing your online activity back to you.

There is an optional setting which sends your diagnostic data back to Avira to help with product improvements, however, you can switch this off at any time within the VPN app.

Avira's free VPN isn't particularly fast on either local or international connections, although it's faster than many other free services.

Avira Phantom Free is by no means the quickest free VPN we’ve seen.

Connecting to the ‘Nearest location’ server option gave us speeds of just over 50Mbps (on a 100Mbps test line).

A speed percentage loss of 47% may seem a lot, but as far as free VPNs go, it’s not too bad. Avira’s upload speeds were very quick, too, at over 70Mbps.

Avira’s latency isn’t the lowest we’ve seen at just under 20ms, but unless you’re a serious gamer this shouldn’t affect you too much.

Lots of server available on mobile but not on desktop

The global spread and coverage of the VPN server network is the most important factor here.

We also consider the number of city-level servers, plus how many IP addresses are maintained.

For a free VPN service, Avira offers a huge number of locations to connect to - as many as on it's paid premium service.

Avira used to offer as many locations on its free version as it did on its paid version, before removing choice of servers for free users altogether.

However, our recent testing has found that Avira has reverted that decision on mobile. Free iOS and Android users once again have access to the full array of Avira servers – that’s a choice of 38 countries and 52 cities.

While there are premium VPNs which offer a far greater number, this is a terrific choice for a free VPN.

For Windows or MacOS users, though, you can only connect to the nearest server.

Streaming is rated by the number of different services unlocked, how many regional libraries are viewable, and how consistently the VPN can access them.

Avira Phantom Free isn't a great VPN for streaming. We were able to access US netflix on mobile, but not desktop. No other streaming services worked.

The free version of Avira Phantom isn’t brilliant for streaming, however we were able to access US Netflix.

We consider that to be the most important streaming library. That does appear to be the limit of its abilities, though, as it wouldn’t work with the Germany, Japan, or France libraries.

This only works on mobile, though, as on Windows and MacOS it isn’t possible to select the US server.

We calculate the average download bitrate of every VPN using a bespoke torrenting setup.

Testing also factors in the percentage of servers which permit P2P, plus useful features like port forwarding.

If it weren't for Avira Free's 1GB data cap it owuld be a good free option for torrenting, but that data cap makes it hard to download more than one or two files a month.

There are no clear rules on torrenting with Avira Free, and there’s actually no mention of it on the website.

When we tried using the VPN to torrent, though, it worked really well. So well, that it’s one of our best free VPNs for torrenting.

The main drawback is the 1GB data cap, which is only enough to download one or two files a month.

There’s also no kill switch though, meaning there’s a risk your IP address could be exposed during use.

Not a good VPN service for China

Our remote-access server in Shanghai, China routinely tests if a VPN can beat restrictions and access a free, open internet. Obfuscation technologies and nearby servers are also a contributing factor.

Neither the free nor premium Avira Phantom apps work in China, or other heavily censored regions.

The free version of Avira Phantom is not a good VPN service for users in China, and it looks like that has unfortunately been the case for quite some time now.

One user took to Avira’s customer forums to let others know that they’d tested Avira Phantom with various ISPs such as China Mobile and China Unicom, and the VPN wouldn’t work while connected to any of them.

This is most likely due to the fact that Avira uses OpenVPN, which is very easily detected and blocked by government censors, and it has no additional obfuscation tools to hide your VPN connection in any way.

Take a look at our Best VPN Services for China for a comprehensive overview if you’re planning on connecting out from that country.

Works with most devices but not routers

How is device compatibility rated?

A quality VPN should maintain functional, fully-featured applications and extensions for as many platforms and devices as possible.

This does not directly contribute to the Overall Rating, but instead makes up a portion of the Ease of Use rating.

Avira’s free VPN has a native app for the four major platforms (Windows, Mac, iOS and Android), but not routers.

There are free Avira Phantom VPN apps for most popular devices, including:

Sadly, it isn’t possible to install Avira Phantom at router level, so you the only way to use it is to individually download and install it onto all of the devices you wish to protect.

The good news is that you can use Avira Phantom on as many devices as you want at the same time. Remember, however, that these all use data from the same stingy allowance of just 1GB per month, so be careful.

It’s really easy to install and add this to your browser, and it works in exactly the same way as the desktop and mobile apps.

Unlike the proxy extensions most VPN services offer, Avira Phantom provides a VPN extension, which encrypts all your browser traffic.

Offers a basic level of security with no kill switch

Avira does enough to ensure your online safety while you’re connected. It uses top-class encryption (AES-256) and the most secure VPN protocol (OpenVPN), but there are no advanced settings at all.

As a bare minimum we’d expect to see a VPN kill switch, but Avira Phantom Free doesn’t even provide one of these. This means that if the VPN connection were to drop without you noticing, your true physical location could be exposed.

One very good feature of Avira Phantom Free is that it operates its own VPN servers, and there’s also built-in protection against DNS leaks, which we found to be 100% effective in our latest tests. 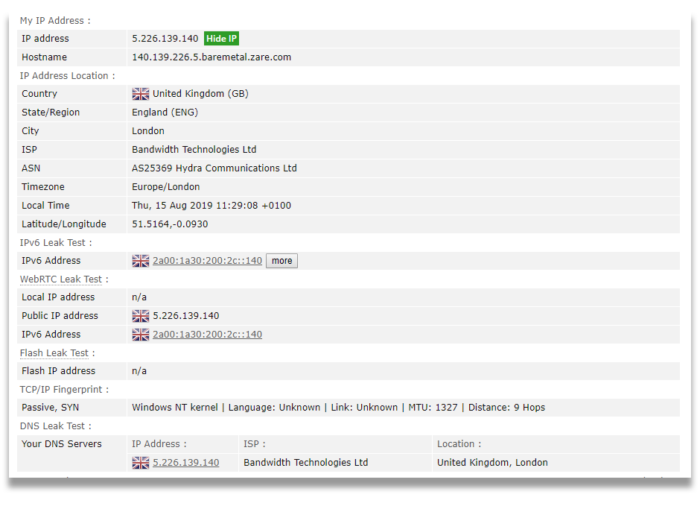 If you’re looking for loads of configurable settings to fiddle with, Avira Phantom isn’t for you, but it does a decent job at protecting you online – we really would insist on seeing a kill switch in the future, though. iOS users should also note that the iPhone and iPad app uses IKEv2 rather than OpenVPN.

This rating mainly consists of the intuitiveness of setup and everyday use.

Device or platform compatibility and customization options are also a factor.

Like the paid app, Avira Free is easy to use for basic actions, but totally lacks advanced features or options.

How to Install & Set Up Avira Phantom Free VPN

Avira Phantom’s free VPN apps couldn’t really be any easier to use, regardless of whether you’re on mobile or desktop. Avira’s home screen is limited to an on/off button, your VPN server location, and the amount of data you’ve consumed so far.

You can view Avira Phantom’s full list of VPN server locations by clicking on ‘Nearest location’, but they are all labeled as ‘Pro’ and you won’t be able to connect to them. Clicking the ‘On’ button will connect you to Avira’s closest free VPN server.

Avira’s settings are behind the cog icon in the top right-hand corner. These are very minimal, though, and are pretty much limited to whether or not you consent to sending your diagnostic data to Avira.

Avira Phantom is a great free VPN solution if you’re just looking to click-and-forget, but it’s not a good choice for those who want a ton of configurable settings.

No personalized support for free users

This rating is based on our assessment of each VPN’s:

Not every VPN offers all of these, and they often vary in quality and response time.

Unfortunately, Avira offers minimal support for free customers. There are some FAQs and video tutorials available, but that's it.

Avira Phantom’s free users are currently unable to access any personalized customer support. This means users with free VPN accounts can’t email or call Avira support agents unless they upgrade to premium subscriptions, which we unfortunately see all too often from free VPN services.

Avira Free users are only able to access the FAQs and ‘Educational Videos’ on the website – thankfully, these are fairly comprehensive and should cover most problems.

You’re also able to view questions and answers on the user forums, although these aren’t updated very frequently.

Avira Free is held back by its data cap

Since Avira Phantom Free is a safe and secure VPN, we can recommend it to users who don’t mind the drawbacks and want a free service, but it just doesn’t compare to premium services.

This VPN is especially good for torrenting, but it’s 1GB data cap really restricts how much you can download.

You also can’t do any streaming with this free service.