Hotspot Shield Free VPN has over 50 million downloads on the Google Play Store alone, so can that many VPN users be wrong?

According to its website, Hotspot Shield’s free VPN provides users “world-class privacy and protection for every device.”

But we don’t take any VPN services at their word. We’ve thoroughly tested this free VPN service to find out exactly how private it is.

Before we answer all of these questions (and more) in depth, take a look at Hotspot Shield Free’s pros and cons.

If you’re looking for a review of Hotspot Shield’s premium VPN, though, follow this link.

As you can see, there are quite a few privacy issues with Hotspot Shield Free, but its speeds are some of the best in the free VPN market.

Read on to find out who’s behind this VPN.

Who is Hotspot Shield Free?

Released in 2008, Hotspot Shield is owned by Pango (formerly AnchorFree), which has developed other VPN apps like Betternet and TouchVPN.

Pango is based in the US, one of the least privacy-friendly jurisdictions in the world.

This makes Hotspot Shield subject to intrusive surveillance laws and intelligence-sharing agreements with other nations such as the UK, Canada, and Australia (the Five Eyes).

However, Hotspot Shield released a Transparency Report in January 2019, stating: “[we have] never provided the identity or other personal information regarding our users to a government, law enforcement agency, or other third party,” which goes some way to reassuring us that your personal information is safe.

Hotspot Shield Free VPN doesn’t monitor anything you do (as an individual) while you’re connected to the VPN, but it does collect the following:

We don’t like that Hotspot Shield’s free VPN shares certain information, including your city-level location, with third parties in order to display personalized ads. It’s certainly not a no-logs VPN.

Avoid Hotspot Shield Free VPN if online privacy is your priority – it’s definitely not the safest free VPN out there.

Hotspot Shield’s free VPN is very fast – you’ll experience the best speeds if you live in North America, though.

Considering we test from the UK and the only option we had was to connect to a US server, Hotspot Shield’s free VPN app still produced great speed test results.

Speed results from our physical location in London (100Mbps fibre optic connection) to a US test server.

When connected to Hotspot Shield Free:

Our download speed loss when Hotspot Shield Free is running: 55%

As is to be expected when connecting over such a long distance, Hotspot Shield’s latency is extremely high and uploads poor.

Gamers and torrenters ideally want to be able to connect to a nearby server for the best possible performance, so if you’re located outside of the US, it’s definitely worth looking at other options.

No choice but to connect to the US VPN server

Hotspot Shield Free VPN users only get access to one server location – the US. While this probably won’t be an issue for those living in North America, it’s far from ideal for those based in Europe, Asia, or Africa.

Annoyingly, the VPN server limitation isn’t made clear within the app, where you can see the full ‘premium’ server list on the app. If you try and click on a location other than United States you’re simply prompted to upgrade to one of the paid plans.

It’s unclear how many physical servers are available to free users – Hotspot Shield Premium has 3,200 VPN servers and allows users to connect to 82 countries worldwide.

Unlike the premium version of the VPN service, free users of Hotspot Shield can’t drill down to city-level in the US.

If you need access to more locations and don’t want to pay for a VPN, consider using TunnelBear.

It’s impossible to stream Netflix with the free version of Hotspot Shield VPN. In fact, when we tried to access US Netflix, a payment wall notified us that “access to this content is a premium feature.”

Because you can only connect to Hotspot Shield VPN’s free US server, you can’t even attempt to stream video content from UK-based sites like BBC iPlayer.

If you upgrade to Hotspot Shield’s premium service, however, you’ll be able to stream Netflix, BBC iPlayer, and more in no time.

When we asked support if P2P is permitted on the free VPN server, an agent confirmed that it wasn’t allowed due to restricted bandwidth on the free plan.

Even if torrenting were possible, we wouldn’t recommend Hotspot Shield’s free VPN for that purpose due to past incidents that violated users’ privacy.

Hotspot Shield states on its website that connection may be ‘intermittent’ in countries where ISPs and governments are known to block VPN services, such as China, Iran, and Turkey.

These issues are most likely due to the lack of additional VPN obfuscation tools (or stealth protocols) available in-app, making it really easy for censors abroad to detect you’re using a VPN and block your connection.

Hotspot Shield also explains that while the VPN may be blocked on one platform, it might be possible to use it on another, so expect a lot of trial-and-error.

If you need a VPN for China or any other country that blocks VPNs see our dedicated guide here.

The free version of Hotspot Shield VPN is available on:

There are no manual workarounds for other devices, including Linux.

There’s no way to manually configure Hotspot Shield Free VPN to work with routers or any other devices like games consoles or streaming devices, but with the very limited daily data cap of 500MB it’s unlikely that you’d want to install the VPN at router level anyway.

While the Premium version of Hotspot Shield comes with custom VPN apps for Android TV and Amazon Fire TV Stick, these are not available for free users.

Hotspot Shield has a free proxy extension (click the link to read our guide explaining the difference between proxies and VPNs) for Google Chrome for users that need a more lightweight web browsing experience.

This free proxy is super simple to set up, but shouldn’t be a replacement for a full-featured VPN app as they don’t encrypt traffic device-wide.

There are no browser extensions for Mozilla Firefox, Safari, or Opera at this time.

Hotspot Shield has had a few controversies to deal with in the last couple of years (see below), making it difficult for us to recommend it to those with stringent privacy needs. 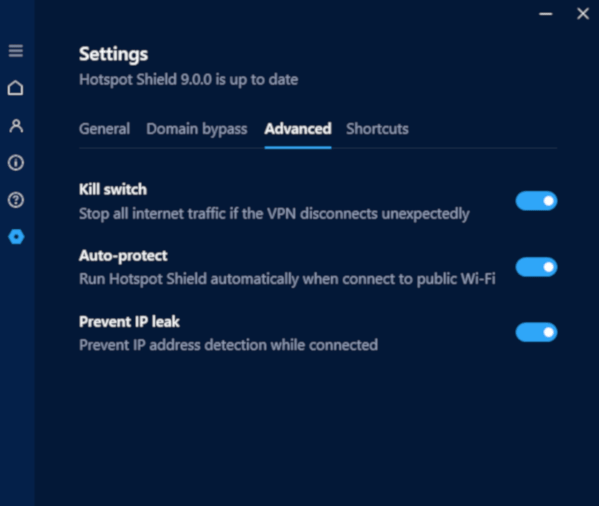 The Hotspot Shield Free uses exactly the same VPN protocol as Hotspot Shield Premium, but the level of security provided by HydraVPN isn’t completely clear, so it’s difficult for us to compare it directly to our preferred protocol OpenVPN.

Hotspot Shield Free encrypts your data using top cipher AES-256 (and AES-128, too), though, which is considered impossible to hack.

Hotspot Shield Free VPN also comes with a couple of advanced features, including a VPN kill switch and protection against IP leaks, which prevent your true IP address from being exposed in case of a VPN connection failure.

We didn’t experience any IP or DNS leaks during our testing of Hotspot Shield Free. 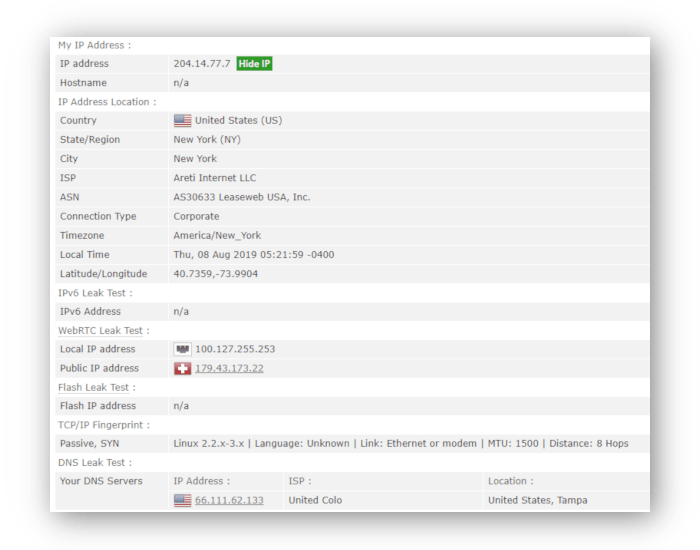 Hotspot Shield Free leak test results on browserleaks.com. We test from the UK.

Sadly, this is where the positives end, as there have been allegations made in recent years that would be enough to put off even the most committed of subscribers.

In August 2017, it emerged that Hotspot Shield had allegedly been injecting affiliate links into users’ traffic in order to monetize it – you can read the full complaint by the CDT (Center for Democracy & Technology) here.

While this was, at the time, fully disclosed in its privacy policy (which has since been completely rewritten), it massively violated user privacy and went against everything VPNs stand for.

Up until then, Hotspot Shield also didn’t class user IP addresses as ‘personal information’, therefore it could (falsely) claim not to collect “any Personal Information about you when you use the Service,” which was an outright lie.

Another recent controversy was a software flaw that made it possible for hackers and snoopers to view your true location through your WiFi network name – this was discovered in February 2018 and you can read more about it here.

AnchorFree (Hotspot Shield’s parent company, now branded as Pango) dismissed these claims as ‘unfounded’, but Paulos Yibelo, who found the bug, said it only took him a few seconds to write the code and expose users’ true IP addresses.

Hotspot Shield said it would remove any software components capable of leaking ‘generic information’, which is good to hear, but it shouldn’t have taken a security flaw this serious to make it realize that it needed to make a software change.

Events like these leave a bitter taste, but it has to be acknowledged that Hotspot Shield has made a lot of improvements since and is now moving well and truly in the right direction, slowly regaining users’ trust.

Very simple to set up and use

How to Install & Set Up Hotspot Shield Free

The fact that you’re only able to connect to the US server isn’t made clear, and this can be frustrating to new users. When you try to access other VPN locations you are simply prompted to upgrade.

Once you’re connected to Hotspot Shield Free VPN you can see your new virtual location and IP address, along with information about your data usage – you’ll also receive an alert when you’ve used 50% of your daily allowance, which is helpful. 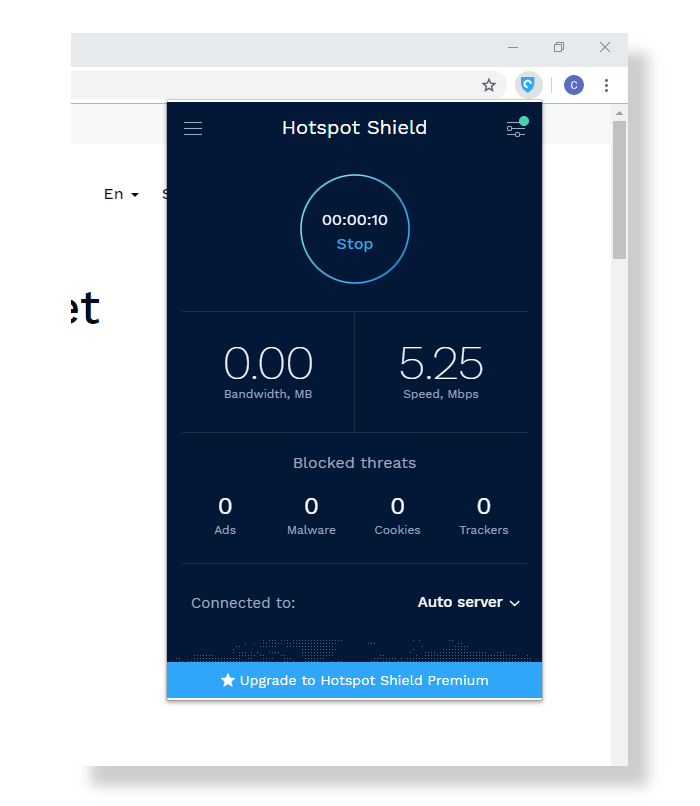 Setting up Hotspot Shield’s free browser extension for Google Chrome is even easier than installing the desktop app. Just find the software on the Chrome Web Store, download it, and connect.

No live chat support or email, FAQs only

You won’t be able to make use of Hotspot Shield’s 24/7 live chat and email support, which leaves you with just the online resources.

Even some of those are restricted to premium subscribers.

The FAQs – which are available to free users – cover basic queries and troubleshooting tips, but lack more advanced solutions.

Do We Recommend Hotspot Shield Free?

Hotspot Shield is a very popular VPN, but unlike its premium counterpart we don’t recommend it. It may be fast, but Hotspot Shield still doesn’t meet our standards for free VPNs.

With a history of selling user data and a very limited service (just 500Mb per day, and one server location), it’s neither the most private nor the most convenient free VPN available.

Windscribe's free VPN is the best complimentary service we've ever tested. It's private, safe, and you can choose from 10 VPN server locations around the world. Read Windscribe Free review

ProtonVPN Free grants users unlimited data - a welcome rarity for free VPN services. With minimal logging and plenty of advanced features, it's also one of the most private and secure free VPNs around. Read ProtonVPN Free review

Already use Hotspot Shield Free? Tell us what you think.

Showing 1 out of 1 reviews